(Woof. Just a blast off right from the start. This movie should remain in the pantheon of bad movies for ever more. I doubt many films drop below 4.0 on IMDb and yet have over 35 thousand votes, it makes almost no logical sense.)

Leonard Maltin – 1.5 stars –  A brother and sister spend an eventful day in the company of a magical cat while their single mom is off at work. Brightly colored adaptation of the beloved rhyming book for young children is a betrayal of everything that Dr. Suess ever stood for, injecting potty humor and adult (wink-wink) jokes into its mixture of heavy-handed slapstick and silliness. Hayes also provides the voice of The Fish. Officially known as Dr. Suess’ The Cat in the Hat, which is an official insult.

(I’m going to play a little game of “find the half star.” Where does Leonard find a half star to give this “official insult” and “betrayal of everything that Dr. Suess ever stood for”? Is it in the bright colors? Is it Sean Hayes? I just don’t see how this isn’t a BOMB review.)

(Welp, this is going to be the worst. Great.)

Writers – Dr. Seuss (book) – (Known For: How the Grinch Stole Christmas; Horton Hears a Who!; The Lorax; The 5,000 Fingers of Dr. T.; BMT: The Cat in the Hat; Notes: Gained some traction in Hollywood after writing the Oscar winning animated short Gerald McBoing-Boing. Following that he created his only original screenplay, The 5,000 Fingers of Dr. T, which came in at a startling 1200-pages.)

Alec Berg (screenplay) – (Known For: The Dictator; EuroTrip; BMT: The Cat in the Hat; Shark Tale)

David Mandel (screenplay) – (Known For: The Dictator; EuroTrip; BMT: The Cat in the Hat)

Combine Notes for Berg, Mandel and Schaffer – Got the gig after doing punch-up work on the Grinch film. Won the 2004 Razzie Award for Worst Screenplay (Cat in the Hat). These three are pretty much responsible for assuring that no other Seuss books were ever adapted into live-action films because Dr. Seuss’ widow was so offended by the non-family friendly nature of the film. Not wonder, look at their filmography! Additionally they are still all heavily involved in television. Berg is the exec producer of Silicon Valley, Mandel is exec producer of Veep, and Schaffer is the creator of The League.

Actors – Mike Myers – (Known For: Inglourious Basterds; Shrek; Austin Powers: International Man of Mystery; Austin Powers: The Spy Who Shagged Me; Shrek 2; Wayne’s World; Shrek the Third; Austin Powers in Goldmember; Shrek Forever After; Wayne’s World 2; So I Married an Axe Murderer; BMT: The Love Guru; The Cat in the Hat; View from the Top; 54; Mystery, Alaska; Notes: Wow, interesting how few bad movies he actually ever made. It just seems like he made a lot because The Cat in the Hat and The Love Guru were so reviled.)

(That looks like a gigantic bomb to me. They were deceived by How the Grinch Stole Christmas methinks, whose success is probably more down to the holiday connection than anything else.)

(This is more of a massive bomb because of its budget if nothing else. Look at Lemony Snicket’s Series of Unfortunate Events, a bomb because it cost $140 million (!). But below Cat in the Hat is Jumanji which was nothing but a resounding financial success because it only cost $60 million. This category is a fascinating hodge podge).

(Did you really have to end the consensus with “this Cat falls flat”? That is giving me chills at just how bad that is. Why did you do that?) 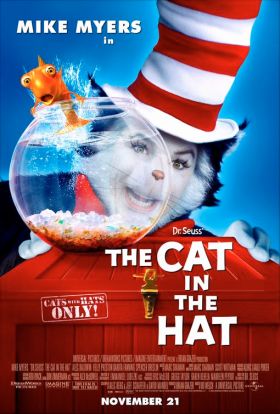 (Too much going on. Too many colors. The font would probably only trip up Patrick for a moment if he spoofed the poster (I would make it “The Sklog and the Dog” and it would be him and his dog. Nailed it). And as for the tagline…)

(Oh no! Oh deary me, no! Sweet summer child. That… that is meaningless. Interestingly, imdb posts several taglines including “The ultimate game of cat and house,” which I would have probably scored a B. Kinda clever, kinda fun, not totally sensical, but sensical enough. It just seems to be a phrase said in the trailer and not really used anywhere else.)

Notes – Mike Myers was unaware that a piece of the house would fall behind him near the end of the film. His reaction was real. (cooooooooooool)

As a result of this film, Audrey Geisel, the widow of Dr. Seuss decided to reject any future live-action adaptations of her husband’s work claiming that this film differed from her late husband’s Family Friendly Material. (As mentioned in the note above)

According to Mike Myers, less than a month before the film was released, the producers had already begun plans for a sequel based on The Cat in the Hat Comes Back. Because of the film’s negative reception, it was abandoned. (Sounds about right, also probably wouldn’t have been able to secure the rights even if they thought they could fix the issues)

Tim Allen was originally cast as the title role, but couldn’t do it because he was filming The Santa Clause 2 (2002) (Also starring Spencer Breslin, what?! Were you busier than him, Tim? Oh you were …)

Won the Razzie Award for Worst Excuse for an Actual Movie (All Concept/No Content!)

Nominated for the Razzie Award for Worst Actor (Mike Myers)

Nominated for the Razzie Award for Worst Screen Couple

Nominated for the Razzie Award for Worst Director (Bo Welch)