Alright, well this week we have a very special interlude in our Razzie cycle. While normally we would be watching something that came out earlier in the year in one of our genres, this week we are watching an IN-THEATERS BMT SPECIAL!!!! That’s right, every once in a while a movie comes out that is just too crazy/beautiful to resist. The last one we were so fortunate to catch was Hitman: Agent 47, this time it’s a little Vin Diesel doozy that we’ve been waiting for with great anticipation. It’s finally here! The Last Witch Hunter! And just in time for Halloween! I love it. I can’t remember a film I would have been more disappointed to find that it didn’t end up qualifying for BMT. But it did. And it’s here. Hooorrraaayyyy! Let’s go!

(Ooooooo pretty stuff. Obviously generated after the fact, this is a very nice plot. First, you can seem to make out different release dates in the initial fast increase, but you can definitely see the VOD/DVD release near the end of January beginning of February. Beautiful stuff. A BMeTric of 25 feels right, right there on the cusp of being a BMT shoe in.)

RogerEbert.com – 3 stars – Many films try and fail to pull off the kind of densely over-plotted action-fantasy that director Breck Eisner (“The Crazies,” “Sahara“) nails in “The Last Witch Hunter.” The secrets to Eisner’s success are confidence and patience, both of which compensate for the film’s script whenever it becomes embarrassingly thin (especially during its rushed finale).

(I’m glad to know that a densely-plotted film with a (paradoxically) embarrassingly thin script can still make it in this world. It does kind of hit an idea that Patrick and I have stood by since the beginning of BMT, though: plot is just plot is just plot. As long as the film looks good, is acted well, and the script is well written then pretty much anything can be forgiven about how ridiculous the plot of a film is. So maybe we’ll like this.)

(“Do you know what I’m afraid of?… nothing” Just perfectly sums up how much garbage this looks to me. Just bad writing that somehow Vinny D has to try and sell. The entire plot is so trite and overplayed. Haven’t we seen this is Blade? Underworld? I, Frankenstein? Men in Black? Even Juptier Ascending, which we just watched! Maybe we won’t like this after all.)

Director(s) – Breck Eisner – (Known For: The Crazies. BMT: Sahara; The Last Witch Hunter. Notes: He’s the son of Michael Eisner, the much criticized Disney executive who kinda fucked up the company in the late mid-late 90s. Wow.)

Writer(s) – Cory Goodman (written by) – (BMT: The Last Witch Hunter; Priest. Notes: Apparently co-wrote Apollo 18 but didn’t get credit for it… or didn’t want credit for it.)

Matt Sazama (written by) – (BMT: Dracula Untold; The Last Witch Hunter; Notes: Writing partners with Burk Sharpless. I like that this exists. Also says that plot data is not available without IMDBPro, except they don’t block the IMDBPro from google bots. Dumbos. It’s apparently ‘Described as a futuristic “Jungle Book.”‘ Hahahahahaha.)

Burk Sharpless (written by) – (Known For: ; BMT: Dracula Untold; The Last Witch Hunter; Notes: Son of John Sharpless a history professor at U of Wisconsin. Fun.)

(Hard to say where this will land. Hasn’t been out too long, but did terribly opening weekend. Ended up as the 54th worst opening by a supersaturated film (3000+ theaters). Just ahead of… wait for it… Abduction staring Taylor Lautner. The company you keep. Editor’s Note: The $27 million domestic is bad, but if you squint then doubling the budget overall might be construed as a modest …. push. But probably not, no incentive to make a sequel at least.)

(I think Patrick and I are becoming experts at decrypting even the most boring and/or confusing films that Hollywood has to offer. After watching Jupiter Ascending nothing can phase me. This will probably be as clear as a mountain lake in comparison.) 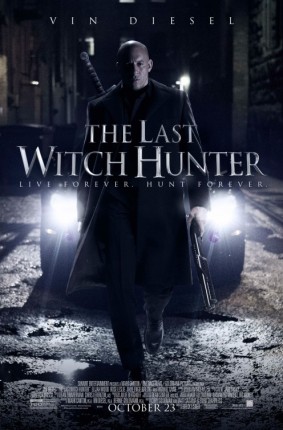 (Even though I think the poster is too dark, at least it’s consistent. Don’t like the car headlights. Too bright. Looks a little cheap too. Otherwise hits the right marks. Symmetry. Simplicity. Editor’s Note: I don’t know what you’re talking about. This is a terrible poster.)

(I can only give it so much positive. I like the symmetry. I like the brevity. It just doesn’t do it for me in terms of providing insight into the film. Not clever enough either. Just good.)

Notes – The screenplay for this film was featured in the 2010 Blacklist; a list of the “most liked” unmade scripts of the year. (Take this with a grain of salt. A lot of stuff ends up on the blacklist. Case in point? The Last Witch Hunter earned seven votes from executives contributing to the list. Another film that earned seven votes? The aforementioned Abduction).

Vin Diesel had been a Dungeons and Dragons player for many years. The main character in this movie was partly based on his old D&D character (Melkor) who was a Witch Hunter. He used one of the 3rd party D&D books to create the character class as he loved being a Ranger type but also like to use a few spells too. (N-n-n-n-n-n-erd alert. Get out of here nerd with your nerd books).

Plans to film The Last Witch Hunter (2015) were announced in 2012 and initially Timur Bekmambetov was to direct the film based on a script written by Cory Goodman. Bekmambetov was later replaced by Breck Eisner and Goodman’s script was re-written by Dante Harper before Melisa Wallack was brought on work on the film’s script. (Neither of those writers ended up with a credit on the film).