The horror genre should be the bread and butter of the Squeakuels cycle. There are a lot of directions we could go. The abhorrently titled I Still Know What You Did Last Summer, Blair Witch: Book of Shadows, Jaws: The Revenge, or perhaps Silent Night, Deadly Night Part 2 (if only for this hilarious scene). God knows I wish we could just rewatch Silent Hill: Revelation. But alas we cannot. Instead we went for a classic in order to try to take a bite out of what is largely considered the worst of the major horror franchises. That’s right, we’re watching Friday the 13th Parts II and III. Nearly all of the Friday the 13th qualify for BMT other than the first and the sixth. So here we’ll knock off 25% of the series in a go. Let’s go!

(I am a little shocked, this is basically the same story as for Part 2 except drop the rating by 0.5 thus adding 10 to the BMeTric. It has the same regression to the mean, 2011 inflection, and recent drop in BMeTric. I wonder if the whole series kind of holds the same trend. Probably a little overrated rating wise, a ton of votes. It just takes me by surprise, I was expecting much more from Part III)

Leonard Maltin – 2 stars –  Strictly amater night in terms of acting and writing, but this entry deemphasizes explicit gore in favor of shocks, and delivers a few – especially in 3D and widescreen.

(What?! This shows what Leonard really thinks about horror. Thank god there isn’t any explicit gore in this entry. Instead let’s go for some fun 3D shocks! What a weirdo. Just enjoy the kills and effects man. Funny enough Leonard is known to only like Part III and Jason Takes Manhattan… which everyone else hates, hates, hates.)

(That was much better than the trailer for Part 2. Seems like there are some fun looking kills in this one and the hockey mask makes an appearance. This is actually oddly promising.)

Directors – Steve Miner – (Known For: Halloween H20: 20 Years Later; Lake Placid; Forever Young; House; Wild Hearts Can’t Be Broken; Warlock; BMT: Big Bully; Friday the 13th Part III; Soul Man; My Father the Hero; Texas Rangers; Friday the 13th Part 2; Notes: Was an associate director on the first Friday the 13th and then transitioned to director for Parts II & III. Also worked as an editor for Wes Craven early in his career (although credited as a P.A. for Last House on the Left).)

Carol Watson (screenplay) – (BMT: Friday the 13th Part III; Friday the 13th: The Final Chapter; Notes: Ha! Both her and Kitrosser are credited with writing the story for Meatballs Part II. Interesting that they seemed to have a short lived collaboration.)

Petru Popescu (uncredited) – (Known For: The Last Wave; BMT: Friday the 13th Part III; Notes: He claimed in an interview that casting for the film was based entirely on looks and nothing to do with acting ability (I’m sure it shows).)

Actors – Dana Kimmell – (BMT: Friday the 13th Part III; Notes: Mostly a TV actress in soaps and the like. Retired from acting.)

Tracie Savage – (BMT: Friday the 13th Part III; The Devil and Max Devlin; Notes: Long time reporter in the LA area, she has won three LA area Emmy’s for her work. She even reported on the OJ Simpson trial and had to take the stand regarding information she reported from an anonymous source. Wow.)

Richard Brooker – (BMT: Friday the 13th Part III; Notes: He portrayed Jason in the film. Died of a heart attack a few years back. Very interesting guy if you take a look at his IMDb.)

(Still punching well above its weight. This is still the fourth highest grossing in the series. All the films nearly go down in gross in order before bottoming out with Jason X.)

#22 for the Horror – Slasher genre

(I found this plot to be interesting enough I’ll just copy my notes from the Part 2 preview: This guy sits right in the middle of the pre-85 horror genre at around $20 million. Blockbuster horror is still somewhat unique, at least with slashers. Only 11 films have over $50 million domestic! The Scream series holds the top three and are the only films to gross over $100 million. I had to kind of hack my program for this because they didn’t record the number of theaters for this movie, that’s why the dashed line isn’t really on the graph. The big peak is Scream. The genre saw a resurgence in the late 2000s … and now it is VOD. All Horror will be VOD soon beyond, currently, the Babadooks of the world. I am convinced there will always be a place for people to come together to be scared as a group, but it just is very small potatoes. Kind of sad to see the genre get swamped in the late 80s and then collapse in the 90s. That’s the story of horror though.)

(Generally regarded as the second worst in the series. However it’s hard to tell as rankings are all over the place depending on what the ranker likes in a horror film. I believe the consensus would go a little something like this: Heavy on gimmick, light on scares. This entry may finally kill a series that was already on life support. I like that fake consensus because it would end up being so very, very wrong.) 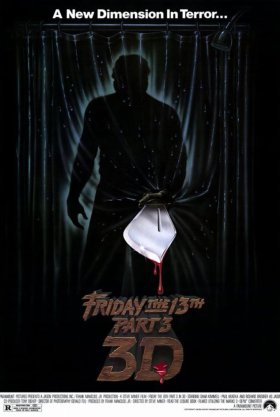 (There is something fun and artistic with these posters. I like the framing and dark colors with contract. Take a look at that crazy title font to boot!)

(Flows nicely and tells a bit of the story. Not as good as the Part II tagline, but still pretty good.)

(Some of these are not like the other, some of these do not belong. Hilarious list due to the comedies stuff in there. Otherwise pretty expected. Someday we’ll complete all of the major horror franchises, you’ll see.)

Notes – This was the first of the Friday the 13th films to use the iconic hockey mask, which has been in every sequel since. (Yup, watching the first three in a row the transformation of the killer is actually rather shocking considering how iconic Jason became)

The original plan for the film involved Ginny (Amy Steel) from the previous film being confined to a psychiatric hospital. Suffering from the trauma inflicted on her during the ordeal with Jason, she eventually finds that, intent on revenge, he has tracked her down, and he begins to murder the staff and other patients at the hospital. Steel ultimately declined the offer to return to the series as she was busy with other projects, but has since said that she thinks she should have accepted. (That is the plot of Halloween II, just a mental hospital not a hospital)

To prevent the film’s plot being leaked, the production used the fake title “Crystal Japan,” after a David Bowie song. This began an on-again, off-again tradition of giving “Friday the 13th” films David Bowie song titles during filming. (gross, who cares about the plot of a microbudget horror film?)

This film actually takes place the day after the events of Friday the 13th Part 2 (1981), making it Saturday, the 14th. While the beginning takes place on the evening of Saturday, the 14th, when the store owner and his wife are killed, the majority of the film takes place on the following day, making it Sunday, the 15th. (Oh snap Jamie, are you ready for some temporal settings? [Jamie’s note: I don’t think this is accurate according to what I read online])

Larry Zerner was cast as Shelly when the producers spotted him handing out fliers for a horror movie and asked him if he’d want to star in one himself. (Jesus. When did they start taking this stuff seriously?)

The 3-D version contains a title card not seen in 2-D home video releases (for obvious reasons): after the Paramount Pictures logo fades out, the card reads “Ladies and gentlemen: The first few minutes of this picture are not in 3-D. However, you will need the special 3-D glasses.” The film then continues as normal with the recap of the ending of Friday the 13th Part 2 (1981), presented in 2-D. The 3-D begins with the shot of Jason removing the machete from his shoulder. (Kind of wish I could watch that shitty 3D honestly)

Although it appears sunny and warm, the film was shot during a January/February winter. Several night scenes were trimmed in order to conceal the actors’ visible breath appearing on screen. (huh fun fact)