Jamie and Patrick sit glumly backstage at the Academy Awards juggling their newly won Oscars. 2 Rich 2 Poe: Reclamation was a smash hit, obviously, and hailed as ushering in a new age of post-irony filmmaking. Even their ruse to premier the film on an acre of newly razed Amazonian rainforest was taken as a commentary on how art is contributing to climate change through its unwillingness to engage in the political discourse leading to the President signing a new carbon reduction law at the premiere. “And it still might have been OK if you hadn’t knocked down that tree and discovered a cure for cancer,” sighs Patrick looking sadly at his Nobel Prize for Medicine, “they couldn’t help but give us good reviews after that.” Jamie scoffs angrily, “well you just can’t admit that you botched this whole thing. You should have listened to me in the first place. We needed robots and computer technobabble galore.” Patrick tugs uncomfortably at his cable-knit sweater, “well alright, Mr. Roboto, why don’t you take the lead on the next one. God knows they’ll let us write it. Just make sure it’s shit, alright?” Jamie smiles at the challenge, “oh it will be total garbage.” With that he pulls out a mini-recorder and begins an extemporaneous dictation of the entire script, “Title: Rich and Po3: Dark Web 3D. We open in Bulgaria…”

We pan over broken shards of glass and come upon a battered Rich. Christmas lights twinkle in the background as he struggles to reach for a picture of his beloved Jade and their toddler, Junior. He gasps in pain as he hugs the picture to his chest, “Bye bye,” he stammers… “bye bye… love.” That’s right! We’re continuing our journey through the films of Hackers actors by jumping to a little known film called Bye Bye Love starring Paul Reiser, Matthew Modine, Randy Quaid, and Wendell Pierce (aka Agent Dick Gill) in a minor role. Why’d we pick this film? When McDonald’s may as well be listed as part of the cast we don’t really have a choice. Let’s go! 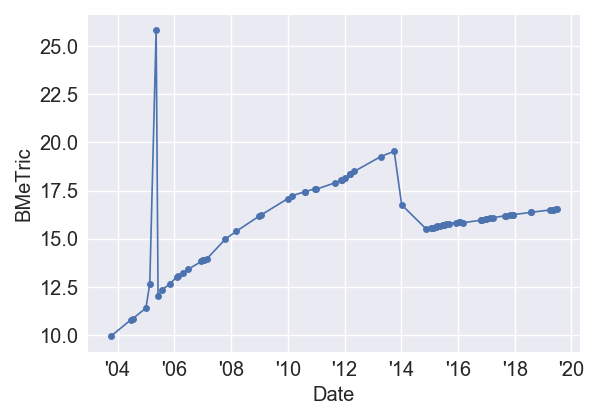 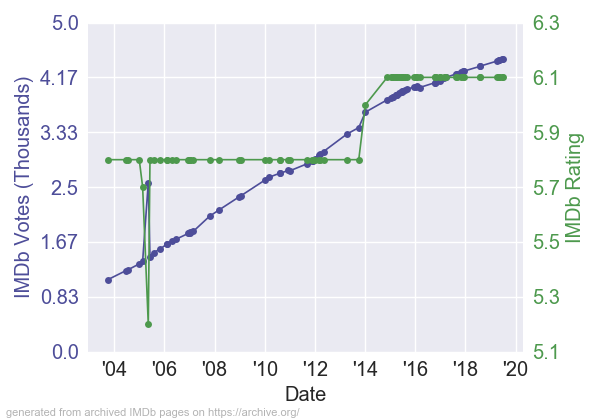 (That blip … seems real? Here is the dip, and here is the date after. Probably purging fake votes … then again, why would there be fake votes for Bye Bye Love? So maybe … some database error? Regardless, weird and wild stuff. Actually a classic 2014 increase there. Something happened in 2014, precisely on New Years’ Day I think. It’s weird.)

Leonard Maltin – 2 stars –  Mediocre seriocomedy about three dads, devoted to their kids, trying to make their way through divorcehood. Some sincere moments and occasional comic insights are washed away in a sea of sappiness. Garofalo, as Quaid’s hilarious date from hell, almost makes the film worth watching.

(I’m not even going to pretend that seriocomedy is a real thing Leonard. I refuse. Just call it a goddamned dramedy like a normal person. And no mention of McDonald’s and how delicious it is? Ridiculous.)

(There appears to be what? Like five different scenes in McDonald’s? You can even tell by the trailer alone that it was bought and paid for by McDonald’s!)

Paul Reiser – (Known For: Aliens; Whiplash; The Spy Who Dumped Me; Beverly Hills Cop; The Little Hours; Funny People; Life After Beth; Beverly Hills Cop II; Concussion; Behind the Candelabra; War on Everyone; Diner; Joshy; Cross My Heart; Miles; The Thing About My Folks; Future BMT: The Darkness; The Story of Us; One Night at McCool’s; I Do… Until I Don’t; Crazy People; The Devil and the Deep Blue Sea; BMT: The Marrying Man; Bye Bye Love; Notes: Also, crazily, in Stranger Things. Most notable for his starring turn in Mad About You with Helen Hunt.)

(I still don’t understand … how does a film like this make over $10 million? Regardless, apparently the entire production was funded by McDonald’s so they probably didn’t care.)

#244 for the Romantic Comedy genre

(Only First Daughter, Town & Country, and Say It Isn’t So made less for BMT films. The genre is making a shocking comeback. Right when it looked like it would be permanently relegated to Netflix and VOD in general)

(I’ll just have to make a consensus: Effective for some, but essentially just an extended McDonald’s advertisement. Reviewer Highlight: The angst of dating, the struggle with children, and the joys of McDonalds. – Scott Weinberg, eFilmCritic.com) 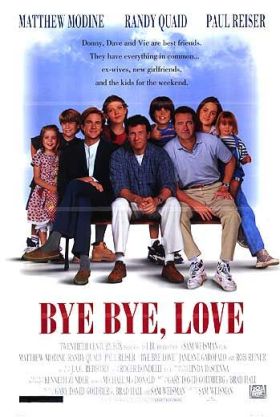 (A real tried and true favorite here. Just pile a bunch of humans up and that’ll look good (hint: it doesn’t) and then when you realize you don’t have enough human garbage to cover your poster just throw some sky on there because… why not? There’s sky everywhere. Why not in the poster? Also I’m not even going to try on the font, just to really insult you.)

Tagline(s) – Donny, Dave and Vic are best friends. They have everything in common … ex-wives, new girlfriends, and the kids for the weekend. (F)

(My god. Is this a novel? I grew a beard while reading this. What is it even saying? Are they just telling us the basic premise of the movie? Is this supposed to entice us? Just a million words in tiny font on the poster telling us to gear up for a depressing tale of divorce. I hate this.)

Janeane Garofalo would later go on to play Paul Reiser’s adult daughter Mabel on the series finale of Mad About You.

Amber Benson, Eliza Dushku, and Lindsay Crouse went on to star in Buffy the Vampire Slayer the TV show together as Tara, Faith and Prof. Maggie Walsh.

In 1995, both this film and Houseguest (1995) featured extensive McDonald’s product placement, but neither film was accompanied by a promotional tie-in with the fast-food restaurant. (I could have sworn there were Bye Bye Love Happy Meals with little toy Matthew Modines … perhaps just a wonderful dream)

Lucille is wearing a different earring in each ear when on her date with Vic.

Matthew Modine and Paul Reiser later starred on Stranger Things (2016), with both appearing in the second season. While they do not share screen time, both actors’ characters are connected to the series’ Hawkins National Laboratory. (Huh)