“This how you got there?” the gangster squad says looking into the prison tunnel where Jamie and Patrick first got to the BMTverse and met Nic Cage, “didn’t peg you for a criminal.” Patrick just shrugs somberly. He can’t stop thinking about Sticks and Stones. A dangerous pair for him and Jamie together, let alone on their own. “Well we better get down there before they find us,” Patrick says, but the gangsters put a hand on his shoulder. “Woah there, big guy, you don’t think we’d let you go down there alone. Who knows who or what is waiting for you on the other side. We got you a guide. Someone who knows the terrain, someone who spent some time as a prisoner in the BMTverse. He’ll help you get down there and find you brother and if he don’t we’ll kill him,” they laugh as they grasp Patrick’s hand. “Thanks,” Patrick replies, realizing that these gangsters are his friends. Ever since he and Jamie made it big on the Rich and Poe series he had forgotten what it was like to have a friend and he smiles. Just then his guide emerges from the tunnel “You ready to go?” he growls and Patrick is stunned. “Woah! Sly? What are you doing in the BMTverse? You don’t belong there. You’re the best! The best!” But the man shakes his head. “No, the name’s Rambo. And I’ve spent my fair share of time in the BMTverse,” he says looking into the distance, “You better believe it.” As Patrick attempts once again to enter the tunnel he’s even more shocked to see three more Rambos emerge from the tunnel of varying ages. “You better believe it,” they all growl in unison. That’s right! The third BMT Live! Of the year is upon us and it’s an extra special Rambo extravaganza. We waited with bated breath for Rambo: Last Blood to officially qualify and once it did we realized that Rambo: FIrst Blood Part II, Rambo III, Rambo, and Rambo: Last Blood all qualify for BMT. Ohhhhhhhhh boy. Let’s go! 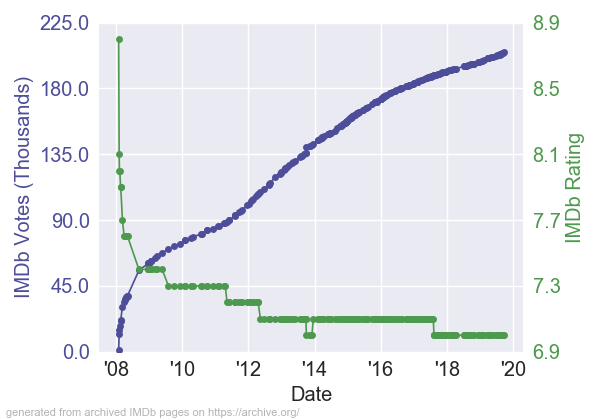 (It is kind of stunning to see the rating so high here. I’m going to be honest, I’ve heard nothing but bad things about this film. That it is gore for the sake of gore and just not in the spirit of the Rambos that preceded it. I guess I’ll see.)

Leonard Maltin – 1.5 stars –  Stallone is a bit long in the tooth to be reprising his Rambo character, but here he is in the series’ fourth installment (and first in two decades). This time around, everybody’s favorite whacked-out Vietnam veteran-action hero emerges from a peaceful retirement in Thailand to rescue come captured missionaries and doctors in Myanmar (Burma). Needlessly bloody and unintentionally laughable. Stallone also co-scripted.

(This is literally the only thing I’ve ever heard about this film, that it is needlessly bloody. So much so that it makes you feel gross … I don’t like feeling gross so I’m not looking forward to this.)

(Them not showing Julie Benz basically at all in this trailer is insane. She’s basically the entire motivation for the film. Looks dumb though, like … this trailer is the same regardless of whether this was even released to theaters. Looks like a straight-to-video Van Damme film sequel basically.)

Writers – Art Monterastelli (written by) – (Future BMT: The Hunted; BMT: Rambo; Notes: He was a television writer for decades, and then reeled off three features right at the end of his career. This is his last writing credit.)

Julie Benz – (Known For: As Good as It Gets; Circle; Due occhi diabolici; The Brothers; Future BMT: Jawbreaker; Saw V; Havenhurst; Life on the Line; Supremacy; The Boondock Saints II: All Saints Day; Black Sheep; Inventing the Abbotts; Answers to Nothing; BMT: Punisher: War Zone; Rambo; Notes: You would know her as Rita from Dexter. She competed in the 1988 US Ice Dancing Championship, placing third. Her older brother and sister represented the US internationally in the sport.)

Matthew Marsden – (Known For: Black Hawk Down; Bounty Killer; Shiner; Future BMT: DOA: Dead or Alive; Tamara; Transformers: Revenge of the Fallen; Resident Evil: Extinction; The Young Americans; BMT: Anacondas: The Hunt for the Blood Orchid; Atlas Shrugged: Part I; Rambo; Notes: An avid superbike racer having been taught by Ron Haslam, and has a black belt in Taekwondo.)

(This is apparently considered a big enough success to suggest at the time that a fifth film would be made. I don’t really see how that could be, it seems by any account this would be a net-zero film roughly. But there maybe is some strange accounting for a hard-R film starring Stallone which means the production gets more money from foreign ticket sales.)

Rotten Tomatoes – 38% (56/149): Sylvester Stallone knows how to stage action sequences, but the movie’s uneven pacing and excessive violence (even for the franchise) is more nauseating than entertaining.

(I like the green tone and finally they have a unique font. Not loving the close up on the face. Makes the poster a little jarring, but probably the best of the bunch.)

Tagline(s) – Live for nothing, or die for something. (C)

(This would grade higher if it wasn’t so cliched. This happens sometimes where you get a tagline that sounds super great, but then you realize that it could apply to 50% of all movies ever. So hard to grade.)

(I kind of love this list. We’ll be watching Shaft this year I think. And Sgt. Bilko will be fun to revisit some time. But what’s this? … MacGruber is one of the best films ever made so I don’t really get that.)

Notes – Rambo was banned in Myanmar (formally Burma), and bootlegs are a hot item. Burmese Freedom Fighters have even adopted dialogue from the movie as battle cries, most notably “Live for nothing, or die for something.” Sylvester Stallone said “That, to me, is one of the proudest moments I’ve ever had in film.” (Uuuuuuuuuuuuuuugh)

Sylvester Stallone specifically wanted the film to be set in the midst of the most brutal ongoing global conflict that was basically ignored by the public and media. After ruling out established (and well-known) conflicts in the Middle East, Latin America and Africa, Stallone talked to international experts who told him about the Burmese junta’s mass murder of the Karen people. He then set the movie’s storyline in the middle of this genocide. (No comment)

Rambo’s knife in this film is a primitively built golok made out of a slab of metal as opposed to his expertly crafted survival knives in the other films. Sylvester Stallone actually stayed up all night filming the scene of him forging the knife like you see in the film, although due to time constrictions, he had to do it all at once without cooling the blade. They went through about seven pairs of heat protective gloves due to this. Sly claims after making the knife, he had a rather warm handshake.

Maung Maung Khin, who played the Burmese dictator Tint, fought for the Karen Rebels in real life. He was afraid his family would be murdered if he took this role, but he took it anyway.

Originally, Rambo was supposed to hold the M2 .50-cal. machine gun in his hands and fire it, but when fully assembled the weapon weighed 120 pounds. Sylvester Stallone was still capable of holding and firing it, but it was too cumbersome for quick movements, so it was mounted on the back of a Jeep instead. (It would also be absurd that he could hold onto it while it is shooting actual bullets)

When asked what his take on the film was, First Blood writer David Morrell said:”I’m happy to report that overall I’m pleased. The level of violence might not be for everyone, but it has a serious intent. This is the first time that the tone of my novel First Blood has been used in any of the movies. It’s spot-on in terms of how I imagined the character – angry, burned-out, and filled with self-disgust because Rambo hates what he is and yet knows it’s the only thing he does well. … I think some elements could have been done better, [but] I think this film deserves a solid three stars”. (Wait … wait … he agrees with the direction Stallone took the character? This is giving me a ton to think about)

The first Rambo film where Rambo works with a team, rather than going solo. (Rambo: The Expendables)

Sylvester Stallone described the Burmese River as “the most difficult terrain I’ve ever had to navigate, including Cliffhanger (1993).”

This was the first non-“Rocky” film that Sylvester Stallone directed since Staying Alive (1983). (Huh that is interesting)