Alright, so this week we move onto our Razzie category. We needed a Razzie nominee with a one-and-done director and what better one to do than Eddie Murphy’s only directorial effort, Harlem Nights. In 1989, with Robert Townsend and Spike Lee, there was a bit of a black directing renaissance going on in Hollywood. Eddie Murphy was the it guy and was given the chance to direct a film. He wanted to work with his heroes, so he cast Richard Pryor and Redd Foxx and they cooked up Harlem Nights. Sounds pretty cool and this has definitely got a bit of a cult following over the years, so don’t be surprised if we come back saying some good (or at least alright) things about it. Let’s go! 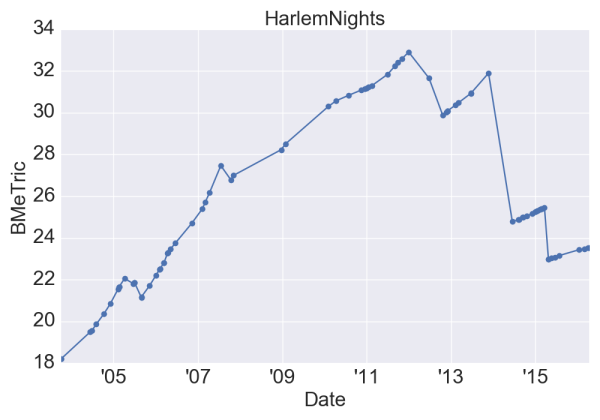 (Yet another weird example of a movie going from “really bad” about 10 years ago (4.8 rating on IMDb) to “mediocre to good” now (5.9 on IMDb). I have to admit, I don’t totally get the migration, but I assume it is just a general IMDb trend, the more people you have voting the higher the average rating tends to be. If this trend keeps up this will end up not even really registering for BMT at all, it if gets to 6.2 it will be near to 15 or so with the BMeTric. Vaguely interesting stuff guys.)

Leonard Maltin – 2 stars –  Proprietor of an after-hours club in 1930s Harlem (Pryor) and his adopted son (Murphy) try standing up to a white mobster determined to cut in on their take of put them out of business. Murphy’s debut as a writer-director is skimpily scripted and completely devoid of energy. Even pryor’s effortless charisma can’t breathe much life into this one.

(That sounds about right. Not good, but not off-the-rails bad… two stars. Not sounding like the best BMT film.)

(Huh. A super understated trailer for what is apparently a super understated movie. I’m starting to get the feeling … oh yeah I’m there, I have a bad feeling this movie is “bad” because it is aggressively and unrelentingly boring. I hope I’m wrong.)

Directors – Eddie Murphy – (BMT: Harlem Nights; Notes: Only directorial effort of his career. His quote about directing: “It was a question of wearing too many hats, and as a result, everything was half-assed. All my peers were directing: Keenan [Ivory Wayans], and Robert [Townsend] and Spike [Lee]. I was like ‘Shit,’ I’m the big cat on the block; let me see what it’s like to direct. So I just did it. I didn’t dig it.”)

Writers – Eddie Murphy (written by) – (Known For: Coming to America; Beverly Hills Cop II; Boomerang; BMT: Norbit (BMT); Vampire in Brooklyn; Another 48 Hrs.; Harlem Nights; Notes: Involved in a well publicized lawsuit, Buchwald v. Paramount, involving the Coming to America screenplay. Murphy’s treatment for the script was alleged to be stolen from a screenplay written by Art Buchwald and the trial ended up being settled. Written about in the book Fatal Subtraction.)

(Quite a big hit, although not nearly the hit that the producers anticipated (if stories are to be believed). The more famous story from its release is a couple of shooting that occurred in and around theaters during its release. Led to the first metal detectors installed in theaters.)

(Too old for a consensus, so I’ll make one up: Great cast and sharp 1930’s look, can’t make up for the bizarrely unfunny script by first-time-director Murphy. Maybe stick to acting.) 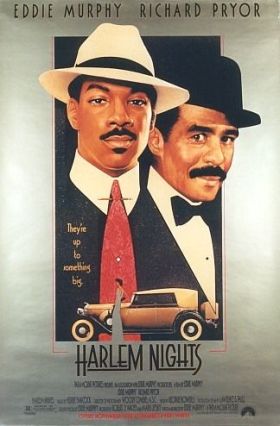 (It’s just classic. I would hang this on my wall. I feel like all the art aspects of this film were off the chain.)

(Does this mean something? I’m confused. Is this a film where Eddie Murphy is made into a 50-foot monster through the reverse use of a shrinking ray? Are Murphy, Pryor, and Foxx tasked with transporting an Elephant somewhere? It only doesn’t get an F because it doesn’t offend my senses.)

Notes – In the autobiography, “Pryor Convictions and Other Life Sentences (1997)”, Richard Pryor states that he ” . . . never connected with Eddie [Murphy]. People talked about how my work had influenced Eddie, and perhaps it did. But I always thought Eddie’s comedy was mean. I used to say, “Eddie, be a little nice” and that would piss him off . . . I finished [Harlem Nights (1989)] thinking that Eddie didn’t like me”.

By his own admission, Eddie Murphy felt that he didn’t dedicate enough thought or care to the directing of his debut. He was more concerned at the time with figuring out where the next party was going to be.

Nominated for the Razzie Award for Worst Director (Eddie Murphy)