This week we get to do SciFi/Fantasy. The film for this genre has been set from the jump for this cycle. That’s because one of the biggest bombs of the year (and all-time) was a post-apocalyptic rollerblading film called Solarbabies… that’s the actual title and plot of the film. It doesn’t even sound real. Oh but it is. And we’re watching it. Should be weird and wild stuff. For those interested How Did This Get Made? did this film a few weeks ago and a rather interesting oral history was developed for it by Slash Film. It includes an interview with the writer Metrov and also an interview with Mel Brooks the producer of the film. Let’s go! 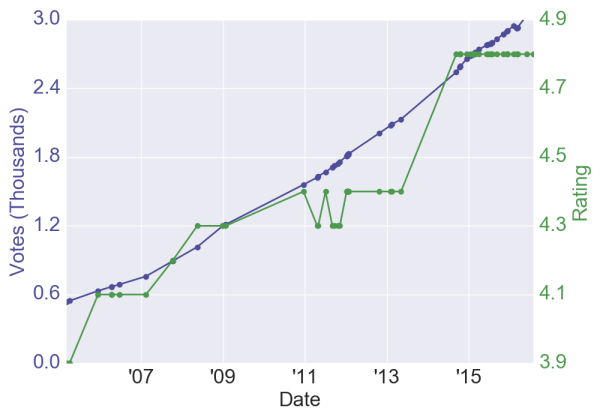 (And we’re back to the classic 1980s BMeTric plot (i.e. pretty linear). Boring stuff once you’ve seen basically the same plot over and over again (linear BMeTric, regression to the mean rating, steadily increasing vote count). If anything the only startling thing is how high the IMDb rating is. Remember Shanghai Surprise has a 3.0 on IMDb. This is more than a point better and far above the likes of other barely-movies like Theodore Rex and Barb Wire.)

Leonard Maltin – BOMB –  Futuristic teen junk has Gertz and her mostly male cohorts imprisoned by Nazi-like Jordan inside a fortress; the group plots an escape with the help of “Bohdi” — an ancient mystical force. Appallingly bad stinker from (Mel) Brooksfilm that barely got released.

(Nice. Semi-colon. Work. Leonard. With that out of the way this is going to probably be the first true blue barely-a-film we’ve seen in a long while. We tend to avoid them, but The Room, Troll 2, and Plan 9 From Outer Space were all at one point seen for BMT. Theodore Rex was probably the most recent … Barb Wire? This certainly has Barb Wire vibes coming all out of it. … Steel might have been the last one. Hmmm, nevermind, we’ve seen quite a few.)

Directors – Alan Johnson – (Known For: To Be or Not to Be; BMT: Solarbabies; Notes: He was a choreographer mostly and on many of Mel Brooks’ films. To Be or Not to Be is Brooks as well. He is a three-time Emmy award winner and probably most well known for choreographing Springtime For Hitler in The Producers.)

Writers – Walon Green (screenplay) – (Known For: WarGames; The Wild Bunch; Dinosaur; Sorcerer; The Border; The Hi-Lo Country; Crusoe; BMT: RoboCop 2; Solarbabies; Eraser; Notes: One of the most expensive screenwriters of the time he merely wrote the revised script for Brooksfilms if Metrov is to be believed (see: Oral history). So apparently a hearty chunk of the budget for the film was for basically nothing. An Emmy and Oscar winning writer, he has been more involved with television in recent year, specifically the Law & Order series)

D.A. Metrov (screenplay) (as Douglas Anthony Metrov) – (BMT: Solarbabies; Notes: Trained as a fine arts painter he ultimately wrote a short treatment for Solarbabies which was picked up and promoted by the producer Mark Johnson. I would highly recommend the Slashfilm oral history for more information, but he has continued to write and direct mostly short films since.)

Actors – Richard Jordan – (Known For: Dune; The Hunt for Red October; Logan’s Run; Gettysburg; Klute; Rooster Cogburn; The Secret of My Succe$s; Interiors; Raise the Titanic; The Friends of Eddie Coyle; The Yakuza; Lawman; The Mean Season; Romero; BMT: Solarbabies; Posse; Notes: A stage, film, and television actor who died in 1993 from cancer. His career spanned 30 years and he’s probably most well known for Logan’s Run.)

Jason Patric – (Known For: The Lost Boys; Sleepers; My Sister’s Keeper; The Losers; In the Valley of Elah; The Abandoned; Narc; Rush; Geronimo: An American Legend; After Dark, My Sweet; The Journey of August King; Your Friends & Neighbors; Roger Corman’s Frankenstein Unbound; Expired; Keyhole; Three Days of Rain; BMT: Speed 2: Cruise Control; The Prince; Solarbabies; The Outsider; Cavemen; The Alamo; Notes:  Nominated for the Razzie Award in 1998 for Worst Screen Couple for Speed 2: Cruise Control, and Sandra Bullock. I feel like Speed 2 might have derailed his career a bit. Grandson of Jackie Gleason, according to IMDb he is very good friends with Laura Dern.)

It should be noted that Lukas Haas of Material Girls fame is also in this, it was his third feature film a year after Witness.

(Huge bomb. In the oral history there should be a link to the interview with Mel Brooks. Interesting stuff. Mel Brooks thought the script was a disaster, but kind of produced the film to help a friend out. He indicates it got him very close to financial ruin because he immediately broke the number one rule: don’t give more money to a failing movie. The original budget was something like $10 million and the director basically spent that immediately. They used way too much film if I recall and Brooks ended up taking out loans just to get it made and released. Leonard is not joking, the film was barely released. Metrov indicates as much as well referring to the film as a miracle in and of itself because by all accounts it shouldn’t exist. It is an interesting story if only from a production standpoint.)

#42 for the Post-Apocalypse genre

(Right on the downswing of the early 80s boom of post-apocalyptics with the Mad Max series and Escape from New York. There isn’t really a good corollary with older BMT films either, this is in the class of low-budget sci-fi which we’ve never really ventured into before. Post-apocalyptic films naturally go in waves. Reminds me of the Patton Oswalt book Zombie Spaceship Wasteland, that there are three types of nerds in the world. The zombie enjoys the idea of a civilization broken down, one where you infrastructure exists but you effectively operate on your own. The spaceship looks outwards to aliens, the unknown coming to a world much like our own (or us going to a totally alien world). The wasteland is about society in complete obliteration with no infrastructure at all remaining. I’m guessing these types of films going in waves like that. I think we came down from zombie a while back and wasteland took over bit by bit. Wasteland (Maze Runner, and Hunger Games to an extent) is now coming down and we are seeing a resurgence of alien. And thus the cycle will continue. Maybe. I’m sure there are counterexamples).

(Zero percent. Like Theodore Rex these kind of movies even having a score is kind of a flukey bad-movie-people-review-DVDs type deal. I’ll make a consensus based on Ebert’s original 1986 review: Dull and derivative of the Road Warrior films that preceded it, Solarbabies boasts impressive locales and costuming, so it is a wonder that such care and attention was never devoted to the script as well.)

(Hahahahaha, that is just the worst. The coloring, the spacing. Only positive would be the unique font for the font. Would be tough to make Sklogbabies out of it.)

(Don’t know where either of these come from (the poster doesn’t have a tagline, although it certainly had a lot of empty space to include one) so I kept them both. The first is simple and short and gives a little hint at the plot. Pretty much meh. The second explodes my brain. Can’t wait to see those blazing skates!)

(Great great list right there. The Darkest Hour has been on the BMT shortlist a ton of times. The others there are also interesting because they are rarely if ever mentioned for BMT. The Cell is an interesting one though, direct to VOD, so again, we are seeing the VOD creep into BMT.)

Notes – All of the main characters’ names are from enlightenment legends and myths from various cultures.

The movie was filmed on location in Spain, a country selected for its abundant desert landscape. Ironically, production was held up for several weeks due to–of all things–rain. (Classic, same thing happened to the Death of Don Quixote, or whatever, the Gilliam production which has failed to come through two or three times now)

A year later Jami Gertz and Jason Patric would appear in The Lost Boys together.

The key speechless character, named “Bodhi”, is also referred to in the film as the “Sphere of Longinus”.

The end theme song, “Love Will Set You Free” performed and written by Smokey Robinson, is about Jesus offering an invitation for Christian discipleship, with direct quotes from Jesus’ sermons in the Bible. (Fun fact right there)

The name Solarbabies refers to the characters’ seeing themselves as the children of the Sun in the dry water-less future in which they live. (So it’s like the opposite of Waterworld?)

The movie has several religious references. The orb can perform what could be described as miracles, one of the red tents in the Bartertown has a crescent moon on it that looks like the one from the Turkish flag, the neon sign in town says Xanadu, which refers to a paradise-like place, and the villain calls the orb “the sphere of Longinus” at one point, which is a clear reference to the biblical spear called The Holy Lance (as well as the spear of Longinus) that killed Jesus Christ. Also, the characters have what could be described as religious experience when they interact with the orb outside together. (That is all incredibly strange… I wonder if this film has ever been a part of a film thesis… probably not)