There had been some thought that this week might be time for a BMT Live! Rings came out to absolutely horrifying reviews (see what I did there?) and we had to think quick on whether we should act. The answer: not until we see the reviews for Fifty Shades Darker. It would be irresponsible to let it go by without giving it a chance at BMT Live! glory. It deserves it. So instead we head into SciFi/Fantasy and get to do a set of films that I’ve been eyeing for awhile. That’s right, we’re watching Species and Species II. These films promise three things: nudity, a scene where someone kisses someone else and their tongue bursts through the back of their skull, and… uh… nudity again. So basically I’m super duper duper excited. Let’s go! 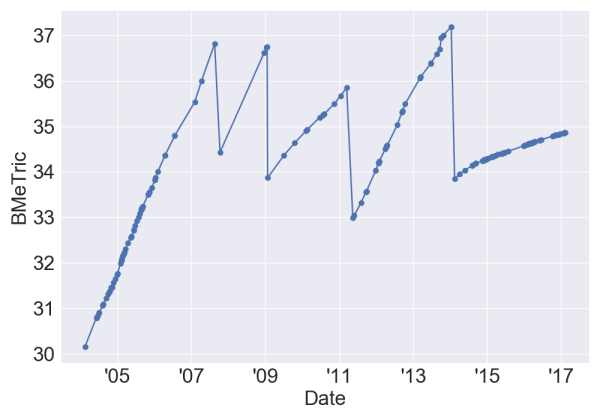 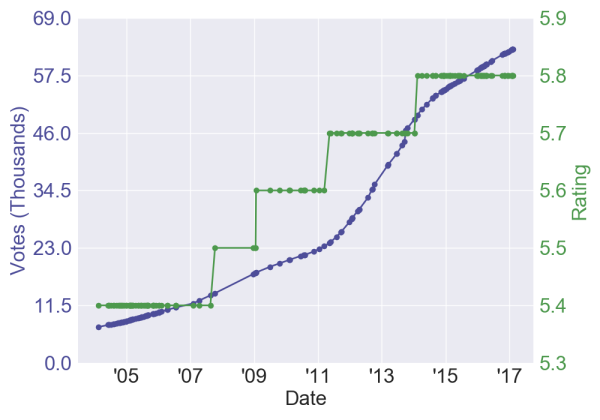 (This plot basically shows the 2011 inflection and regression to the mean. The BMeTric is amazingly consistent through time (35 basically). Hey, since these plot are getting a little boring I’m going to start a new series with this. This is to put movies into groups based on what I see. The first group, for Species, is: Below Average and Perplexingly Popular. Basically this movie ultimate doesn’t seem too bad (rating of 5.8), but the sheer number of votes (nearly 60 thousand) gives an impressive BMeTric overall.)

Leonard Maltin – 2.5 stars – DNA-tampering scientists at a Utah facility ultimately get theirs after creating a murderous creature, complete with tentacles, who’s packages like a blond centerfold. Fast and not without entertainment value, but don’t look at yourself in the mirror too closely if you end up defending it. Direction is somewhat sturdier than the script, which has its share of (we think) unintentional howlers.

(I mean, I’m all about unintentional howlers Leonard, you know me. Films with the horrible villain-scientists are the best though. Like Bats I hope these guys are real megalomaniacal assholes.)

Actors – Natasha Henstridge – (Known For: The Whole Nine Yards; Bounce; BMT: Species II; Ghosts of Mars (BMT); The Whole Ten Yards; Maximum Risk; Adrenalin: Fear the Rush; Species; Steal; Deception; Dog Park; Notes: According to an interview she gave in Empire she turned down roles in both Independence Day and Men In Black after reading the scripts and thinking, “What is this shit?”)

#17 for the Creature Feature genre 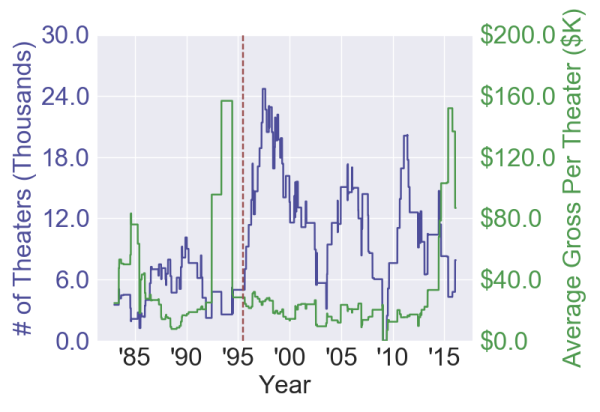 (Ooooo right on the cusp of a giant surge. Obviously this was fueled by Jurassic Park (not this one, but creature features). Critters 2 and King Kong Lives are recent BMT examples, and recently the genre is back with Jurassic World and Godzilla. The new King Kong should continue that trend if it gets good reviews.)

#10 for the Sci-Fi Horror genre 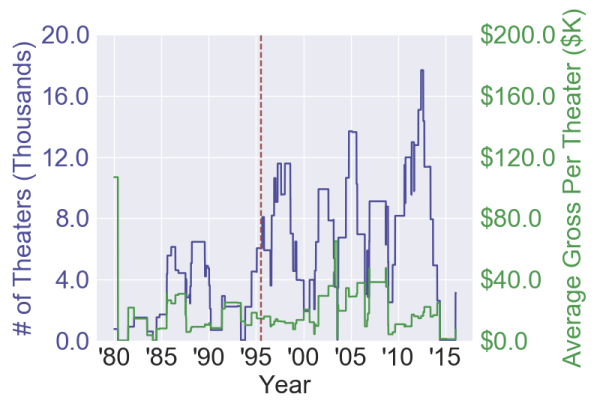 (Ahead of its time! And since about 1995 it has been a pretty consistently released genre. It just doesn’t make a ton of money. I mean, Species is the 10th highest grossing film ever! It is at quite the nadir at the moment, but things like Predator and Alien should sustain it for at least a while longer. It isn’t totally VOD yet!)

(Ooooo I love giving consensuses: A smart take on schlocky sci-fi horror which ultimately devolves into soft-core pornography with a clunky premise. My favorite part of a review is from Ebert himself where he describes the alien as a: “[d]isgusting, slimy morph-creatures with rows of evil teeth, whose greatest cultural achievement is jumping out at people from behind things.” I don’t like jump scares either Ebert.) 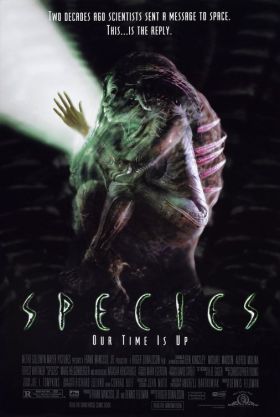 (While it is cheesy in a lot of ways, it is also epic. Really raw image with great font, nice balance, and coloring. Looks like a knockoff of the Alien poster. Still good though.)

Tagline(s) – Two decades ago scientists sent a message to space. This… is the reply. (B)

(Too long and detailed (we need to know that it was two decades ago?), but I like the suspense. Got some cleverness in too with the ellipses.)

(This is real everyone. This is the real top keyword for this movie on IMDb, yet again proving that IMDb keywords are useless … also false! Howard the Duck never has sex with a human. Liars! This list is a house of lies!)

Notes – During the production, MGM opted not to shoot the “nightmare train” sequence to keep costs down. H.R. Giger was not willing to accept that, however, so he spent $100,000 of his own money to finance the sequence.

For the scene in which Sil is ‘born’ from the cocoon, the train set was built upside down. Natasha Henstridge, totally naked and covered in KY Jelly lubricant, was pushed through the cocoon, and the shot was flipped upside down afterwards, to achieve the effect of her falling out.

Xavier (Ben Kingsley) Fitch says that the alien signal was received by the Arecibo radio telescope exactly nineteen years after an outbound message was transmitted. Since the transmissions traveled at the speed of light, that means that the alien solar system is approximately nine light-years from Earth. There are two stars which are likely candidates, Sirius and Luyten 726-8A. (now these are the fun facts I like to see)

Fitch’s comment that they made Sil female to be more docile is an in-joke that belies his ignorance. In every predatory species known, the female is always more aggressive. (I don’t believe this is true)

Michael Madsen and Marg Helgenberger were allowed to improvise their sex scene.

SIL is actually S1L, the medical cell in the lab where the DNA was grown.

An early draft of the script had the young Sil calmly killing a friendly cab driver. In an effort to keep the audience’s sympathy for her character (and to make the murder of the porter more shocking) the scene was changed to Sil killing a tramp in self defense after he attempts to attack her. (There was another BMT film like this, where there clearly was just no kills by the “bad” protagonist for almost the entire movie … but I can’t remember what it was, although I do remember it was a terrible idea.)

When Sil watches TV at the motel, she flips through different channels and they all show various things she will do later in the film. Like having sex, changing her hair, showing off her body, etc. (coooooool)