You’ve been waiting with bated breathe. You might have thought that King Arthur, Pirates, or Baywatch would have hit the mark and made it through. But no! We knew that something even worse reviewed was on the horizon… we just thought it would have been Transformers. That’s right! We’re watching our boy Tommy Cruise in the latest iteration of The Mummy for BMT Live! It’s the second of 2017 (after Fifty Shades Darker) and far less embarrassing to go see by myself. Ever since I saw it’s I, Frankenstein-esque trailers I had held out some thin hope that it might qualify. Little did I know that it would settle at a stunning and unexpected 17% on RT. Oh, I’m excited. Let’s go! 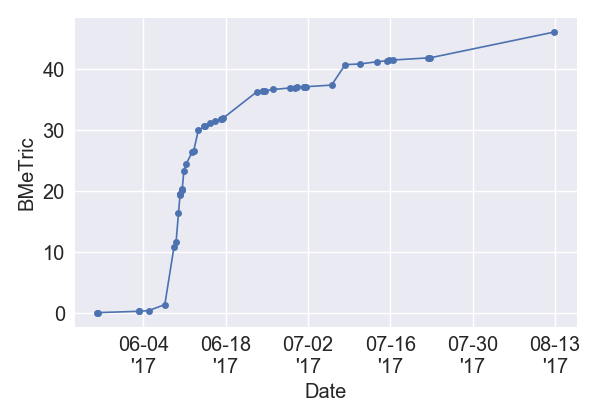 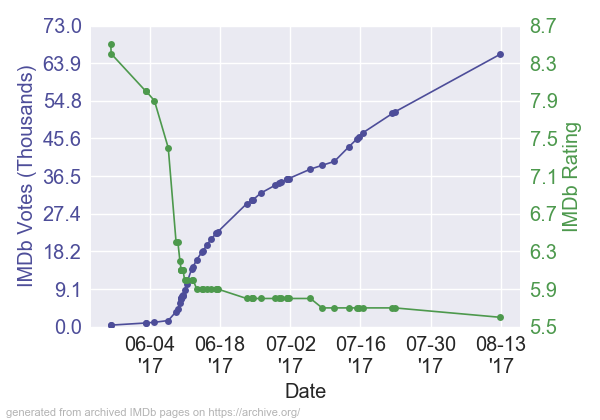 (I do love big film like this. It starts at over 8.0 … how does that happen? Who are the mega-fans of the Universal Dark Universe? With Warcraft it is a bit understandable, but this kind of suggests that a little digital manipulation has been happening by studios. That’s my thought anyways. It’ll bounce back up to around 6.0 I think, but ultimately the BMeTric will remain high because it’ll have like 100K votes. A popular below-average film through and through. NOTE: This plot was updated on August 12, 2017)

RogerEbert.com – 1.5 stars –  Perhaps I’m becoming jaded in my old age, but I was more amused than appalled. The Morton character is admittedly more of a callow nothingburger than any [Cruise]’s played. And given how the movie ends I’m a little disappointed that he wasn’t named Larry Talbot. But who knows, maybe he’ll be obliged to change it for the next installment. Which I am looking forward to, out of nothing but base curiosity.

(Not a too scathing review, even if it doesn’t match the awful 1.5 stars the reviewer gave it in the end. I had to look up Talbot (he’s the Wolfman), so … spoiler alert? Actually I doubt that is a spoiler since, I believe, Cruise is supposed to be a novel character that ties all of the franchises together, possibly Van Helsing (ultimately).)

(Tom Cruise loves his stunts. Two takeaways from this trailer: (1) They repeated his weird scream twice in the airplane scene and it throws me off; (2) I thought this was a terrible trailer which gives the opposite impression you would hope. Universal monsters aren’t action stars. They are supposed to be spooky scary. This trailer makes it abundantly clear they felt the need to “update” the stories to make them action films. They did not. And based on the reviews that decision seems like it didn’t work out.)

Directors – Alex Kurtzman – (Known For: People Like Us; BMT: The Mummy; Razzie Notes: Won for Worst Screenplay for Transformers: Revenge of the Fallen in 2010; Notes: His first major directoral job … and it is meant to launch a universe. A producer and writer mostly, he stepped in after the first two directors dropped out very close to when production was meant to start.)

Christopher McQuarrie (screenplay) – (Known For: The Usual Suspects; Edge of Tomorrow; Mission: Impossible – Rogue Nation; Jack Reacher; Valkyrie; Jack the Giant Slayer; The Way of the Gun; Public Access; Future BMT: The Tourist; BMT: The Mummy; Notes: Kind of incredible story: bummed around teaching in places like Perth, Australia and working as a security guard. Was childhood friends with Bryan Singer and that’s how he broke into the industry, ultimately winning an academy award for The Usual Suspects.)

Dylan Kussman (screenplay) – (BMT: The Mummy; Notes: Half of these people are semi-connected to Tom Cruise. This guy acted in Jack Reacher and is, indeed, mostly an actor. Lives in Tennessee of all places.)

Jon Spaihts (screen story by) – (Known For: Prometheus; Doctor Strange; Future BMT: The Darkest Hour; Passengers; BMT: The Mummy; Notes: Interesting that he helped write Doctor Strange. Will be writing the upcoming Van Helsing movie as well. Passengers was on the 2007 Blacklist as a promising screenplay as well. He is an alum of Princeton.)

Alex Kurtzman (screen story by) – (Known For: Transformers; The Amazing Spider-Man 2; Star Trek; Star Trek Into Darkness; Mission: Impossible III; The Island; Cowboys & Aliens; People Like Us; Future BMT: The Legend of Zorro; Transformers: Revenge of the Fallen; BMT: The Mummy; Razzie Notes: Won for Worst Screenplay for Transformers: Revenge of the Fallen in 2010; Notes: Our director, who is indeed mostly a screenwriter. Well known for his collaboration with Roberto Orci, a partnership which has since dissolved, although both are producers on this movie and still work together outside of feature screenwriting.)

Jenny Lumet (screen story by) – (Known For: Rachel Getting Married; BMT: The Mummy; Notes: She has almost no credits which is interesting. Daughter of Sidney Lumet! And also was married to Bobby Cannavale for nearly ten years.)

Actors – Tom Cruise – (Known For: Top Gun; The Outsiders; Edge of Tomorrow; Tropic Thunder; Mission: Impossible – Rogue Nation; Oblivion; Eyes Wide Shut; Interview with the Vampire: The Vampire Chronicles; Minority Report; A Few Good Men; Knight and Day; Jack Reacher; Legend; Mission: Impossible; Mission: Impossible III; Collateral; Jerry Maguire; Magnolia; The Last Samurai; War of the Worlds; Future BMT: Days of Thunder; Losin’ It; Jack Reacher: Never Go Back; Lions for Lambs; BMT: Vanilla Sky; Endless Love; Cocktail; The Mummy; Razzie Notes: Won for Worst Screen Couple in 1995 for Interview with the Vampire: The Vampire Chronicles, and The Specialist; and Nominated for Worst Actor in 1989 for Cocktail; and in 2006 for War of the Worlds; Notes: Noted scientologist and one of the last in a dying breed of genuine charming movie stars. There isn’t much I could tell most people about Cruise, so I’ll leave it with this: I would watch Jack Reacher all day. Fact.)

Sofia Boutella – (Known For: Atomic Blonde; Star Trek Beyond; Kingsman: The Secret Service; Tiger Raid; StreetDance 2; Azur & Asmar: The Princes’ Quest; Future BMT: Monsters: Dark Continent; BMT: The Mummy; Notes: She has a very distinctive accent having been born in Algeria and grown up in France. She is a classically trained dancer.)

Annabelle Wallis – (Known For: X: First Class; Body of Lies; Come and Find Me; Future BMT: King Arthur: Legend of the Sword; Annabelle; Sword of Vengeance; Grimsby; Mine; W.E.; BMT: The Mummy; Notes: Apparently her role in Peaky Blinders snagged her the role in this movie. Niece of the original Dumbledore, Richard Harris. We’ll see her later in King Arthur: Legend of the Sword I’m sure.)

(Obviously this only counts a few days of its run (reflective when I snagged this particular piece of information). It is doing well enough worldwide to make people pause a bit. It is an utter disaster domestically … but like Pirates of the Caribbean 5 it is looking like foreign box office is saving it a bit.)

Rotten Tomatoes – 17% (32/186): Lacking the campy fun of the franchise’s most recent entries and failing to deliver many monster-movie thrills, The Mummy suggests a speedy unraveling for the Dark Universe.

(Brutal reviews. Reading through them they aren’t nearly as bad as that rating suggested, but the consensus does hint that it is forgettable and boring. Not great. Maybe there will be just enough monster-movie thrills? … Give me one monster-movie thrill, please.)

(Tom Cruise is… The Mummy. Not loving the droll colors here and Cruise is obviously a little prominent for a mummy movie. It’s basically the opposite of the Bredan Fraser poster that has a giant mummy head and pyramids on it. This one looks like a Jack Reacher film set in London. Points for font, artistry, and spacing.)

(Oh no! No! Don’t do this to me. A CEO says this at a ribbon cutting ceremony at a newly opened theme park. It’s not a tagline for an actual film.)

(Yeeessssss of course we are doing a full movie marathon with this keyword. Crossroads?! Street Fighter?! Fifty Shades?! Speed 2: Cruise Control?! It has got something for everyone! It’s fun for the whole family!)

Notes – It is intended to be the first installment in a possible Universal Monsters shared universe AKA “Dark Universe”.

The movie introduces Russell Crowe as Dr. Jekyll, which will set up the character for a standalone film in Universal’s monster universe. (Maybe ill-advised. It is interesting trying to set up films based around monsters … since they aren’t heroes. I hope they aren’t marching towards a League of Extraordinary Gentlemen remake.)

The zero gravity scene took 64 takes and was shot for 2 days in a falling plane. Reportedly, a lot of the crew got nauseous during the scene and vomited, except for the main stars Tom Cruise and Annabelle Wallis, who were really proud of the stunt.

The Book of Amun-Ra from the previous movie-franchise is briefly seen falling down on the floor during a fight sequence. (People use this to claim the two franchises exist in the same world. They don’t … although bringing back Fraser would be kind of funny)

Sofia Boutella’s character is named Princess Ahmanet, which is similar (but not related) to Amunet, a primordial Ancient Egyptian goddess that was the consort of the deity Amun.

Javier Bardem, Joseph Gordon-Levitt, Tom Hardy, and Eddie Redmayne were all considered to play Dr. Henry Jekyll before Russell Crowe was cast in the role. Bardem was then cast as Frankenstein’s Monster. (Oh, I was going to say Bardem would have been a good choice. You’d have to hulkify the other two which would be a little League of Extraordinary Gentlemen as I mentioned before).

Alex Kurtzman did state that there’s no post end credit scene because that’s Marvel’s domain. (No it ain’t bro, but at the same time I don’t care)

When Jake Johnson was offered his part in the movie, he loved the idea and the opportunity to work with Tom Cruise, so he signed on immediately. However, when he read the full script and learned what stunts he was expected to do, he admitted to getting cold feet.

The film was partially filmed in London, England, with shooting taking place in July 2016. (Wooooooooooooo, settings 101 here we come)

The film’s original plot is set in Iraq and follows a Navy SEAL and his team that battle Mummies led by Ashurbanipal. (Wow, that sounds awful)

When Universal was planning their Dark Universe franchise they originally envisioned Dracula Untold (2014) as the first installment with this film being the second. That film ended with Dracula in modern day times while the Master Vampire “Let the games begin” in a very obvious set up for future installments. There was early talk about Dracula appearing in this film. However, as this film progressed it was cited as the first in the Dark Universe leaving the earlier movie to exist on its own. While Dracula director Gary Shore said he hoped the possibility that his film would join the universe was left open Mummy director Alex Kurtzman said it would not be canon. (Ha. I was wondering whether I had some homework to do … turns out nope)