There are a number of Bring a Friend films that we really went out of our way to accommodate. This week is one of those. When it came to the category of Kids films we really wanted to watch something that was a major release, but we would never ever ever ever watch. Not something like Son of Mask, Marmaduke, or the recently watched Baby Geniuses films, where they transcend the “Never Watch Kids Films” BMT rule, but rather a run-of-the-will children’s film that happened to be terrible. So you know what that means. That’s right! We’re watching Clan of the Cave BeAir Bud: Golden Receiver! There is literally a 0% chance that we would have ever watch Air Bud 2. Wouldn’t have happened without Bring a Friend. The same could almost be said about the BMT film that brought it along. Clan of the Cave Bear is a 1986 adaptation of a 1980 historical fiction book set in the Paleolithic era. I has come up before for BMT, but more seriously as an entry for a book-to-film cycle, since the book was a worldwide success and spawned five sequels. I’ve always been curious to read it and now’s my chance. The film ended up being a gigantic box office flop, so hopefully it can live down to that hype. Let’s go! 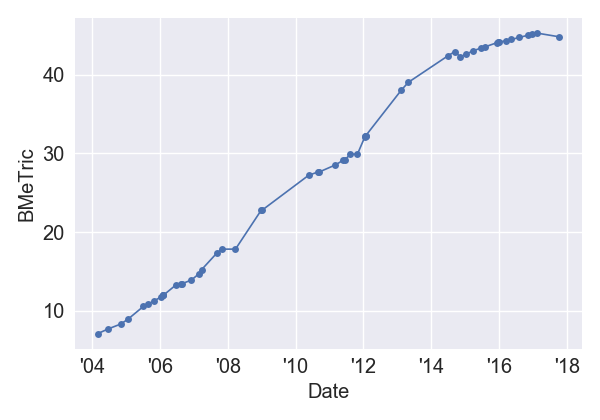 (This really really has that 2011 inflection, although not very many votes at all. And I’ve never seen that U-shape before on the rating, at least not so far after the release. Why it goes down from 2004 to 2007 is beyond me, a true mystery. I smell a little forensic research perhaps: Why did the IMDb rating for Air Bud 2 drop to 4.0 in 2007?!)

Leonard Maltin – 2.5 stars –  Title canine catches pigskins rather than shoots hoops. He and his young owner (Zegers, the lone cast member from the original) join the school football team – plus, a pair of Boris and Natasha-like villains plot to abduct the pooch for their traveling circus. Predictable but harmless fun. Followed by several direct-to-video sequels.

(Predictable but harmless fun, the reason why the Bad Movie Twins no longer watch kids’ films (until now!). I’m sure this will be a non-stop thrill ride … given that the film has a sub-5 on IMDb it is kind of weird Leonard gives it such a break. It is no doubt a stone cold terrible film.)

(Probably the most incredible use of Tubthumping I’ve ever seen. And honestly, the director probably regretted having the kid call the dog the “new wide receptor” instead of the new wide receiver. Seems like just a dumb error instead of a dumb joke. The whole trailer kind of blows my mind honestly.)

Directors – Richard Martin – (BMT: Air Bud: Golden Receiver; Notes: An experimental filmmaker, he is the son of Dick Martin who was a comedian in the 60s appearing on things like Match Game.)

Writers – Kevin DiCicco (character “Air Bud”) – (Known For: Air Bud; BMT: Air Bud: Golden Receiver; Notes: Air Bud’s trainer, who found him as a stray and trained him in a variety of sports. He made a franchise out of the character of Air Buddy he created which featured on America’s Funniest Home Videos initially.)

Paul Tamasy (characters & written by) – (Known For: Patriots Day; The Finest Hours; The Fighter; Air Bud; BMT: Air Bud: Golden Receiver; Notes: Despite being nominated for an academy award for The Fighter, there is very little information about this guy. Air Bud was his first gig, so likely just something he did to break into Hollywood.)

Aaron Mendelsohn (characters & written by) – (Known For: Air Bud; BMT: Air Bud: Golden Receiver; Notes: Born in Alaska, he has been heavily involved with the Writer’s Guild over the past ten years.)

Actors – Kevin Zegers – (Known For: Aftermath; Wrong Turn; Dawn of the Dead; In the Mouth of Madness; Frozen; It’s a Boy Girl Thing; The Jane Austen Book Club; Air Bud; Transamerica; Gardens of the Night; Fifty Dead Men Walking; The Stone Angel; Future BMT: Zoom; The Colony; The Mortal Instruments: City of Bones; MVP: Most Valuable Primate; Life with Mikey; The Curse of Downers Grove; BMT: Air Bud: Golden Receiver; Notes: I don’t know how this guy survived being a child actor starring in four Air Bud films and MVP: Most Valuable Primate. But he has had an impressive recent career on television including an extended stint on Gossip Girl.)

Cynthia Stevenson – (Known For: Jennifer’s Body; Happiness; The Player; Home for the Holidays; Forget Paris; Tiger Eyes; Future BMT: Agent Cody Banks 2: Destination London; Agent Cody Banks; Case 39; Full of It; Live Nude Girls; BMT: I Love You, Beth Cooper; Air Bud: Golden Receiver; Notes: She did six Air Bud movies! She’s been all over television and movies for years. The Air Bud movies make sense considering they are show in Canada and both her and Zegers are in fact Canadian.)

(Not great. Why does an Air Bud movie cost $11 million to make I wonder? These small mysteries surround this film. Probably made mad cash on DVD purchases and rentals though, that is a shockingly large amount of money, especially in 1998.) 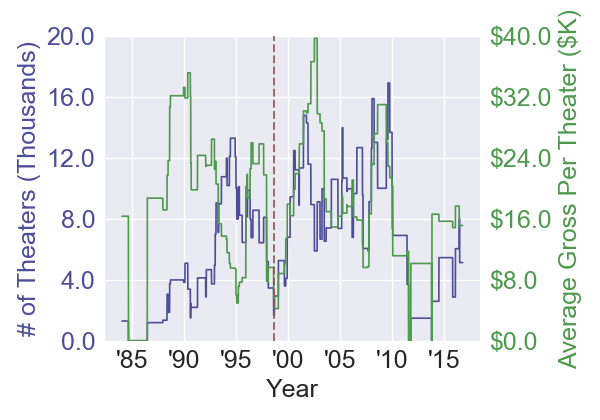 (Not too far ahead of Fluke … not a good look. What I see from this graph is that everyone loves dogs. I kind of love this plot because there is almost a specific trough when Air Bud 2 is released. As if the American people collectively said: No, unacceptable.) 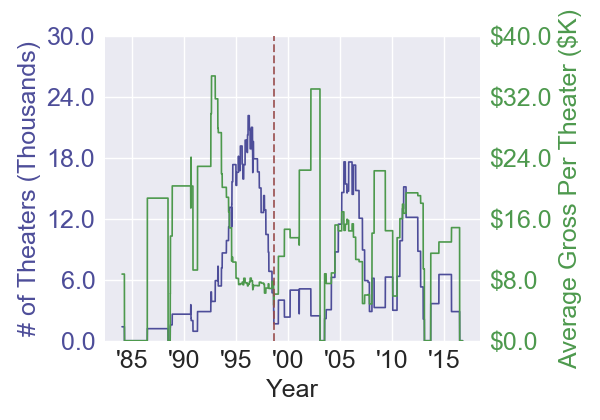 (Below Monkey Trouble which isn’t a great look. I would have guessed Babe was the start to the big 90s boom, but I actually think it is Beethoven, Homeward Bound and Free Willy in ‘92/’93. I have other more unfounded theories about the genre in general, specifically that this was when home video took off and family focused entertainment became a big deal, and animal training was still super cheap.)

#30 for the Sports – Football genre

(Below Little Giants which isn’t a great look. Football films come in waves, although I couldn’t say why. Perhaps there is a natural rhythm to American audience’s tastes in sports films? Couldn’t say. Last big one was Concussion unfortunately (for the sport, I would assume interest overall is waning with a decline in general))

(Let’s make one: A shadow of the original, this lazy sequel is predictable and poorly written, even if it is an innocuous family-focused affair. Some of those are from the time even, like Ebert’s, which is somewhat surprising.)

(The lower quality makes it a bit tough to judge, but I like the symmetry (even if it suggests, against all odds, that Buddy is the star center for the Timberwolves). Otherwise, just a bright colorful kids’ movie poster, what is there to say?)

(Sadly we have basically already done Street Fighter outside of the scope of BMT. We did Legend of Chun Li (Hall of Fame inductee) in our first year and back then BMT was like the wild west. We weren’t reading books, doing homework, or anything! A true disaster. So we have both seen Street Fighter fairly recently, so it is unlikely to earn a spot in the rotation anytime soon. So many bad movies, so little time, you know?)

Movie is in memory of “Buddy” who starred in “Air Bud” as a dog who played basketball.