“22 miles?!” Jamie exclaims, “we’ll never make it.” Patrick knows he’s probably right but they have to try to get their treasure to the masses. They sneak about the city like ninjas using the parkour knowledge they learned from Truth and Dare. Just as they reach the publishing house a man approaches at the same time. He’s wearing a thick turtleneck sweater with a pencil-thin moustache. “Damn it,” whispers Patrick, “It’s my rival, Manfred Long. He writes horror fantasy romance novels. They are totally played out. He’s a hack.” He quickly puts on a smile and slaps Manfred on the back, “Why hello, Manfred. Heading up to a meeting?” Manfred wipes his sweater, “Of course. Just going over my latest manuscript. Basically gonna change the world. Don’t worry about it.” “I’m not worried,” retorts Patrick. “I know, cause I said you shouldn’t be,” jabs Manfred. And they glare at each other. It’s tense. “Wanna hear about it?” asks Manfred. “No,” sighs Patrick, “we have a big meeting too.” But Manfred continues, “It’s a horror fantasy romance novel about a girl who falls in love with a swamp monster.” At that they freeze. Swamp monster? Shit. Jamie catches Patrick’s eye and they all start running for the publishing office at the same time. They gotta get their book out there and fast before that piece of shit Manfred Long plays out Swamp Monsters. They rush up the stairs and obviously easily outpace that hack Manfred Long. When they reach the office they throw the manuscript on the desk of Patrick’s literary agent. Huffing and puffing they look up the find Patrick’s agent holding a gun. “Excellent,” he says, “this will do nicely.” Patrick is shocked. He trusted his agent like a brother and yet he was a double agent the whole time. Manfred enters, also with a gun. Suddenly a shot rings out… and Patrick’s agent falls dead. A triple agent! My god! “Yes, excellent,” says Manfred Long, “our agent wanted this only for money. But I want it for something far greater.” The air in the room grows cold as Jamie and Patrick both whisper the name… Gigandet. That’s right! We’re transitioning to the new year! 2019! And we’re starting off hot with some Franchise-zzzz. Here we will start or finish some major BMT franchises as well as attempt to right some wrong in the BMT past. Most notably our decision to skip right past Predator II when we started in on that franchise. Gotta finish that one up. So we start it up with a major 2018 prequel The Nun which is one of several branches in The Conjuring Universe. I watched the first film in theaters and enjoyed it quite a bit so will be fun to catch up with The Conjuring 2 and The Nun. Let’s go!

(This will be 50+ by the new year which is pretty incredible. No one rocks a bad review like horror fans who sniff any sort of cliched scare tactics. I’m still a bit surprised at how low the IMDb rating is, 5.5 is legit terrible!)

RogerEbert.com – 2 stars –  The “Conjuring” movies—especially James Wan’s original two, and not so much the “Annabelle” prequels—stood apart from so much demon-themed horror with their well-drawn characters, strong performances and powerful emotional underpinning. “The Nun” feels like an empty thrill ride by comparison.

(Having watched the original two at this point I agree with that assessment, and this is the impression I get from the reviews as well. Tired, cliche, and totally out of sorts with the rest of the franchise. That small review of the Annabelle franchise is a bit ominous, I’ve heard good thing about Annabelle: Origins.)

(Make sure you watch to the end … for our stupid jump scare which everyone is going to get mad at us for. And yet … not so mad people won’t go see the film since it made bank. Go figure. Fine trailer I guess, although I had jump scares, they are dumb non-scares, so that is not a good sign for the film as a whole.)

Directors – Corin Hardy – (Known For: The Hallow; BMT: The Nun; Notes: Seems to work a lot in ads and stuff. Started in sculpting, prop design, and animation for film and theater and only relatively recently started to direct features.)

Writers – Gary Dauberman (screenplay by & story by) – (Known For: It; Annabelle: Creation; Future BMT: Annabelle; Wolves at the Door; BMT: The Nun; Notes: Actually set to make his directorial debut with the next Annabelle film.)

James Wan (story by) – (Known For: Aquaman; The Conjuring 2; Saw; Future BMT: Saw III; Dead Silence; Insidious: Chapter 2; BMT: The Nun; Notes: He has had an amazing career and has been a part of some of the biggest franchises ever with Saw, The Conjuring, Furious 7, and most recently Aquaman.)

Taissa Farmiga – (Known For: The Mule; The Bling Ring; The Long Dumb Road; The Final Girls; In a Valley of Violence; 6 Years; What They Had; Rules Don’t Apply; Higher Ground; At Middleton; Future BMT: Mindscape; Jamesy Boy; BMT: The Nun; Notes: Sister of Vera Farmiga who plays a major role in The Conjuring series. Her sister is 21 years older than her.)

Jonas Bloquet – (Known For: Valerian and the City of a Thousand Planets; Elle; Orpheline; Future BMT: 3 Days to Kill; The Family; BMT: The Nun; Notes: Actually from Belgium and not French Canadian like this film makes him out to be.)

(A roaring success which at this point is inevitable. Once hooked horror fans will come back again and again for more. They will gladly shit on the film online if it isn’t to their tastes, but I have no doubt The Nun 2 will make a ton of money as well. You have to spit in their face or produce a number of bombs in a row to get betrayed once that first hit is made it seems. Which is great in my opinion, the horror genre is one of the most interesting and fresh genres around I think.)

#4 for the Horror – Period genre 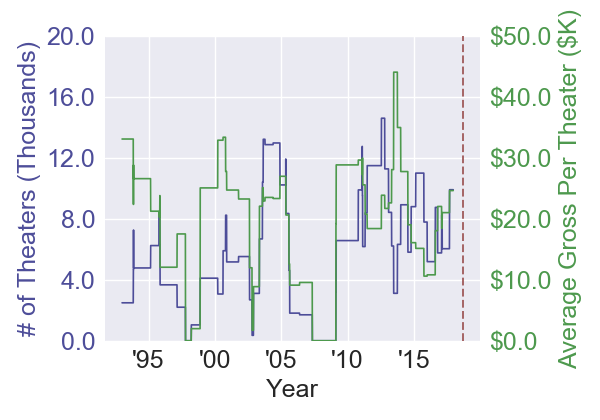 (You’d think this would be better given the witch sub-genre almost by definition should be a period piece, but not even 10 of them have made over $100 million which is terrible. I guess it is at least 10 since for some reason The Conjuring 2 isn’t there when it is, in fact, a period horror film. Which means at least four of the top ten are Conjuring films which is nuts.)

(From I Know What You Did Last Summer to Alone in the Dark we’ve seen a ton of these films at this point. The genre has never been stronger with It and (arguably) Get Out flexing their muscles last year and things like The Nun making a ton of cash as well.)

#9 for the Horror – Supernatural genre 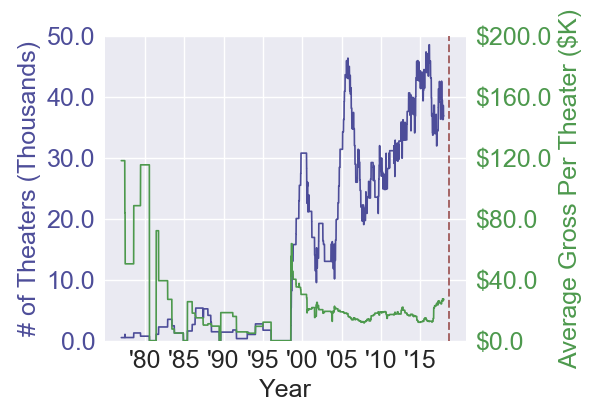 (Nothing can beat The Bye Bye Man in my heart, but that is pretty good for a very strong genre. It hasn’t been this strong since the turn of the millennium for supernatural horror, and having watched The Conjuring, it is kind of amazing that a genre which has been hitting home runs since the seventies can still bring fresh takes and rake in cash. Something that things like slashers can never seem to get the hang of (although a few have come around in the last few years like Happy Death Day).)

Rotten Tomatoes – 26% (45/171): The Nun boasts strong performances, spooky atmospherics, and a couple decent set-pieces, but its sins include inconsistent logic and narrative slackness.

(Wait a second… inconsistent logic and narrative slackness is enough for a 26% on RT. This actually sounds more like “we loved the previous two entries in the series and this didn’t measure up so fuck it.”)

(I like this poster quite a bit. Nice balance in the visual and the font is good. Clever as well given the premise of the film. Just wish it was a little better with some coloring. Need to tie it all together.)

Tagline(s) – Witness the Darkest Chapter in The Conjuring Universe (F)

(Boooooooo. They need to pray for forgiveness for this tagline… ayo.)

(Oooooo Supergirl is going to be a super weird film for sure. And there is Annabelle and Paranormal Activity as well which are inevitably going to have to be done. Bantastic.)

Notes – The film was shot entirely in Romania. (Yeah it was)

This was Valak’s third appearance after The Conjuring 2 (2016) and Annabelle: Creation (2017). Although Valak did not appear in The Conjuring (2013), the scary premonition that Lorraine Warren had in that film was about Valak, as later revealed in Conjuring 2.

After the “Demon Nun” from The Conjuring 2 (2016) proved to be a popular horror antagonist, a spin-off focusing on the character was green-lit, making her the second character from the franchise to get her own feature after Annabelle (2014). The Crooked Man from Conjuring 2 will be the third in The Crooked Man. (Maybe. I guess since The Nun smashed it they will go forward with it, but it kind of sounds like a terrible idea, The Crooked Man is by far the weakest demon character of the three IMO)

Despite the Conjuring and its sequel being based on true events, this film is not based on any real historical events and is entirely fictional

An advertisement for the film was pulled from the video sharing site YouTube, as many users complained that the five second clip featuring a startling jumpscare was “too scary.” Administrators thus removed the ad and apologized, claiming that it was not their intention to publish content that may potentially “offend” or “shock” viewers. (And afterwards people were still seeing it apparently and super pissed. It is basically just a crazy jump scare which shouldn’t be pulled on unsuspecting people)

The film was originally set to hit cinemas in mid-July of 2018 but was pushed back closer to Halloween season on September 7, in hopes of doing as successful at the box office as It (2017) did last year, which smashed records and earned more than USD $700M. (It didn’t do quite that well, but it did do very well).

At the end of The Nun, a scene from The Conjuring (2013) is shown where Ed & Lorraine are performing an exorcism on Maurice. This scene links the Maurice from that video as being the same Maurice from The Nun, but they edited the scene to fit into the narrative of The Nun: they edited in Jonas Bloquet into the exorcism scene, as he used to be played by a different actor (Christof Veillon); they added in dialogue of Ed saying “they called him Frenchie”, so as to make a better connection. (Uh yeah … you can tell. It was pretty weak to be honest).

Valak is mentioned by name only once, when Father Burke looks into the abbey’s history. Everyone else refers to it as “the evil” or “the demon”.

The name Valak can be found in the upside pentagram all in uppercase. (I guess … Valac was a thing before these films, and spelled with a C, so that seems like a coincidence.)