This film will we watched as a BONUS to go along with Universal Soldier: The Return. Go to that preview to read the ongoing adventures of The Bad Movie Twins. 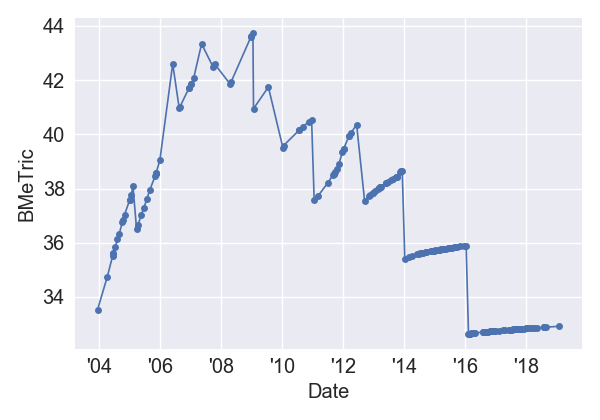 (Nearly reached 50 for a second there. Just following along the normal vote-rating trajector up to 6.0. It is a bit surprising it didn’t stall out, but then again, these types of films feel very ironic and ageless it seems. So I would guess the further away from the time in which it was unironically made, the easier it is for people to give it a good review.)

Leonard Maltin – 2 stars –  Van Damme and Lundgren – well, it’s not exactly Tracy and March in Inherit the Wind. Hunks are well cast as rival cyborgs (in a runaway government experiment, natch) whose human components hated each other during Vietnam. Has the requisite number of explosions. The director slyly keeps the grocery store Muzak going during Lundgren’s one big emoting scene – right after he eats raw meat from a bin. Followed by three “official” sequels and two DVD spinoffs.

(First, Leonard Maltin said “natch” in a review, which is excellent. Second, the Inherit the Wind name drop is sublime. If this review weren’t so long winded I would say it was one of my favorites of his.)

(That actually seems pretty rad I have to be honest. Just some hunky dudes shooting guns and slaying ladies. 1992 was a simpler time.)

Dolph Lundgren – (Known For: Aquaman; Creed II; The Expendables; The Expendables 2; Hail, Caesar!; Universal Soldier: Day of Reckoning; Don’t Kill It; Future BMT: Masters of the Universe; Red Scorpion; The Punisher; Black Water; Skin Trade; The Peacekeeper; Showdown in Little Tokyo; A View to a Kill; Dark Angel; Small Apartments; Rocky IV; BMT: Johnny Mnemonic; Universal Soldier; The Expendables 3; Notes: Notable partially for being a karate champion, and having a Masters in Chemical Engineering. He earned a Fulbright scholarship to attend MIT, but decided to become an actor instead.)

(Decent I think. At least, not a financial catastrophe. I’m not surprised the next one went straight-to-DVD though. I imagine that was a decision made based on quality, not finances.)

#32 for the Action – Martial Arts genre

(This genre really did just tumble down recently. Likely it is getting sucked into VOD and not getting actual releases. This came out right as the genre started to see significantly less gross per theater which is likely the reason the sequels went to DVD. Sadly the highest earning BMT film is The Last Airbender.)

(Robocops and Transformers everywhere! Oh, and Deadly Friend. This came out at a kind of peak of robot films, and since then it has mainly been touch and go. I would guess every year there is some enormous Terminator, or Transformers film, but not very many smaller releases to fill the gaps.)

(I’ll make a consensus: wholly derivative, the audience is just as likely to laugh at as cheer at the repetitive action sequences. Reviewer Highlight: Though the idea is dumb enough to be fun, director Roland Emmerich does the Terminator thing without much style, and the two stars bash into each other but never connect. – Peter Travers, Rolling Stone)

(I like the idea but it needs a bit more brightness. Font is terrible and what’s with the circle? Just OK.)

(It’s like the guy who made the tagline never even watched the film! It’s set in present day! But I’ll give him the benefit of the doubt and assume he meant the “future of weaponry.” Still bad. The second one is just god damned beautiful. It’s perfection. This is what I want out of a tagline.)

(Very nice. We should clean up this very soon. You would think this is just a who’s who of the worst films ever … but I actually genuinely think of soldiers in all of these films. The word is just kind of overly broad.)

Notes – (at around 18 mins) The young couple that Luc reacts to at the Hoover Dam incident are actually the same young couple in the beginning in Vietnam. (I saw that in the trailer, fun)

The production script presented a much darker depiction of the U.S. Military than what eventually ends up on the screen. In the screenplay the Colonel in charge of the Unisol project orders Dolph Lundgren’s character to ruthlessly kill off all the civilian witnesses to his pursuit of Jean-Claude Van Damme’s character. The Colonel also informs the head scientist that the terrorists at the dam were not terrorists at all, but mercenaries hired by the army to provide fake justification for the Universal Soldier program. In the finished film, these scenes are omitted so the witnesses are left unharmed and the gunmen killed by the Unisols at the dam were genuine terrorists. The Colonel and his men are actually heroic figures with a real and valid mission who just want their multi-million dollar Unisol back. Whereas military villains were de rigeur in the post Vietnam 1970s and well into the 80s, by the time of filming the reputation of the U.S. Military was at an all time high following the first Gulf War so it was considered unlikely that the audience would accept them being shown in such a poor light. (Huh cool I guess)

Though they’re all supposed to be American, the Universal Soldiers are played by a Belgian (Jean-Claude Van Damme), a Swede (Dolph Lundgren), and a German (Ralf Moeller). (Their accents are a bit off …)

The last film to be recorded in CDS, an early digital sound format. In the following year of the film’s release, sound technicians had developed DTS. This sound format was apparently of higher audio quality than CDS and has been used in most movie theaters ever since.

The small patch worn on the left breast of many of the UniSols is a U.S. Army Air Assault Badge, signifying that the wearer is a graduate of the Air Assault School. (Some guy on the internet knows his patches)

Ralf Moeller and Dolph Lundgren co-starred together in Universal Soldier (1992). Years later, both actors auditioned for the role of Hagen in Gladiator (2000), with Lundgren losing it due to Ridley Scott being unimpressed by his acting and Moeller winning the role. (Damn you Ridley Scott!)

[NOTE: There is an inordinate number of notes having to do with weapons and weapon accoutrements … I’ve left one in so you can see what I mean]

The highly specialized load bearing equipment worn by the UniSols was custom made by Eagle Industries for the film, including the thigh holster for the Desert Eagle .357 magnum (which also held 2 extra magazines and a Cold Steel Magnum Tanto), the shoulder holster harness for the H&K; MP5K sub-machine guns and the H&K; P9S pistol, extra magazines and grenades. On the opposite thigh, the UniSols are carrying collapsible PR-24 batons.