Poe flips his bat, admiring the bodacious bomb he just hit to left field. As he crosses home plate he is greeted by a scowling Rich, “Isn’t it about time we bust these guys and get that tech? You’ve done enough showboating for the both of us.” Now it’s time for Poe to scowl, “Showboating? I think you’re slump has you a little jelly. Besides, this is all part of the plan. How else are we supposed to get to the tech if we can’t get close to Brock? A star player only hangs with a star player like me,” and with that he bumps Rich out of the way. “Locker room talk, am I right?” he says, sitting down next to a laughing Brock. Rich goes back to sit with Blaze. “Stupid Brock, stupid Poe. Whatever, I’m not jelly. He’s jelly. Besides, I’m not playing that badly, right Blaze?” But Blaze just looks at him. “Shit.” Just then an out of breath Bryce runs up. “Rich! I was wrong. This is just boring ol’ baseball.” He knew it! “I just stopped by the computer lab and saw some people playing a game. I asked what it was and they said it was some new tech. Something big.” Rich is intrigued. Perhaps they are finally on the right track. He turns to tell Poe the news, but sees him charging the mound after taking umbrage at a late called strike. Rich shakes his head sadly and turns back to Blaze and Bryce, “We’ll have to split up and take this on ourselves. We’ve lost Poe. He’s in too deep. Alright, so what’s this game you saw?” Bryce scratches his head, “well, it just looked like online poker to me, but no one ever seems to win.” That’s right! This week we’re moving ever forwards in the Chain by jumping from Armageddon with Ben Affleck to Runner Runner. This was a Justin Timberlake vehicle that I had no interest in seeing at the time and continue to have no interest in seeing. Great. Laurence Mason (aka Lord Nikon) had a bit part in the film. It counts. Let’s go! 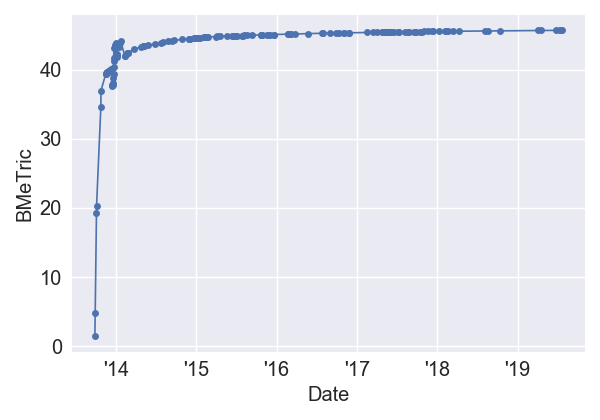 (… Runner Runner came out in 2013?! Anywho, this is an amazing rating which just sticks at 5.6 no matter what. It is actually genuinely its rating: substantially below average. Maybe people just don’t give a shit about poker films?)

RogerEbert.com – 2 stars –  As an exercise in style, “Runner Runner” has its moments, especially early on, but some of Affleck’s torpor seems to infect the film itself after a while. Inventive framing and shot selection give way finally to let’s-get-this-done conversations, filmed in unimaginative shot/reverse-shot style.

(Yeah the entire review is kind of a hit on Affleck for being a bit too big to allow the film to end on its own terms, instead it had to accommodate him as a star and the film suffers.)

(Do you need me to do it again! That is the Extraordinary Measures moment for the film. I always remember that from the trailer. Looks super generic and boring though.)

Actors – Ben Affleck – (Known For: Dazed and Confused; Triple Frontier; Gone Girl; Good Will Hunting; The Accountant; The Town; Field of Dreams; State of Play; Argo; Daredevil; The Sum of All Fears; Dogma; He’s Just Not That Into You; Shakespeare in Love; Mallrats; Jay and Silent Bob Strike Back; School Ties; Chasing Amy; Clerks II; Boiler Room; Future BMT: Surviving Christmas; Buffy the Vampire Slayer; Reindeer Games; Suicide Squad; Man About Town; Pearl Harbor; 200 Cigarettes; The Third Wheel; Live by Night; Batman v Superman: Dawn of Justice; Justice League; Smokin’ Aces; BMT: Gigli; Runner Runner; Phantoms; Paycheck; Armageddon; Razzie Notes: Winner for Worst Actor in 2004 for Daredevil, Gigli, and Paycheck; Winner for Worst Screen Combo for Batman v Superman: Dawn of Justice in 2017; Winner for Worst Screen Couple for Gigli in 2004; Nominee for Worst Actor in 2002 for Pearl Harbor; in 2005 for Jersey Girl, and Surviving Christmas; and in 2017 for Batman v Superman: Dawn of Justice; Nominee for Worst Actor of the Decade in 2010 for Daredevil, Gigli, Jersey Girl, Paycheck, Pearl Harbor, and Surviving Christmas; and Nominee for Worst Screen Couple in 1999 for Armageddon; in 2002 for Pearl Harbor; and in 2005 for Jersey Girl; Notes: Ya’ll know Ben Affleck. Rumor his next project, I think called The Last Duel, is the first team up between him and Damon since Good Will Hunting.)

Gemma Arterton – (Known For: Murder Mystery; Quantum of Solace; The Boat That Rocked; RocknRolla; The Girl with All the Gifts; The Voices; The Disappearance of Alice Creed; Byzantium; The Escape; Tamara Drewe; Their Finest; Gemma Bovery; 100 Streets; A Turtle’s Tale: Sammy’s Adventures; Song for Marion; Future BMT: Clash of the Titans; St Trinian’s 2: The Legend of Fritton’s Gold; St. Trinian’s; Prince of Persia: The Sands of Time; BMT: Runner Runner; Hansel & Gretel: Witch Hunters; Notes: Interestingly enough according to wikipedia she was born with extra fingers which were then removed. Fun.)

(That is a terrible domestic take. Kind of amazing it didn’t do better actually. I would have thought some people would have just gone and seen a Timberlake / Affleck film out of habit. Maybe made back the budget worldwide, but it would have been close.)

#51 for the Crime Time genre 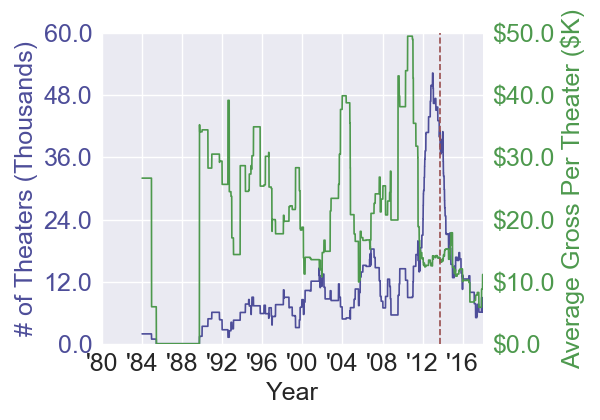 (Crime Time! It is extremely depressing that films surrounding criminals absolutely peaked right after the financial crisis. Like that is the only way people could get a grip on it. Either in the glorification of comeuppance of criminals.)

Rotten Tomatoes – 8% (9/120): It has an impressive cast and an intriguing premise, but Runner Runner wastes them on a bland, haphazardly assembled thriller with very little payoff.

(Hmmmm. I’m only a thriller kick though. Methinks I can get something out of this. That being said 8% is astonishing low. Reviewer Highlight: The actors hit the jackpot, but only in terms of their paychecks. The audience gets a tension-free, tight-assed, Casino ripoff that leaves them thoroughly fleeced. – Peter Travers, Rolling Stone) 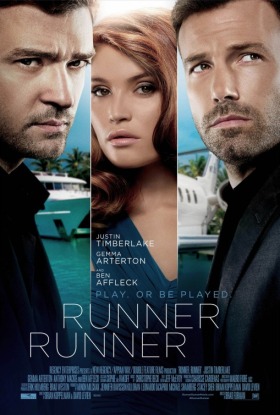 (The poster used for the DVD cover is better than this one, but we default to IMDb as presumably they know better than us what the primary theatrical poster was. This is not good. It’s got an overall blue tone that’s OK, but pretty much everything else kind of sucks. I would say it’s the most boring poster ever if I didn’t know the poster for The Tourist exists. Look at that… it’s almost a masterpiece in being a boring piece of shit.)

(I mean, I guess it has something to do with the plot and it’s not overly long. But not clever and generic to book. Blah on top of blah.)

(Incredible that Runner Runner made it on.I only vaguely remember MacGruber’s poker scene, doesn’t he just lose all of his money immediately? Great film.)

Notes – Although set in Costa Rica, the majority of the scenes in the movie were filmed in Puerto Rico. (SETTING ALERT. That is a high quality setting)

In a 2017 interview with Entertainment Weekly Gemma Arterton said on Runner Runner (2013) “It made me stop wanting to be an actor. The whole thing wasn’t right for me. It wasn’t the type of thing I enjoyed watching or doing. I had a moment where I thought, ‘Okay, I got into this because of Michael Haneke and Lars von Trier and now I’m making action movies.’ Not that I wouldn’t ever do [action movies] again but I realized then that it wasn’t for me and I decided to do more theater and collaborate with people.” (Lol, holy shit, Runner Runner made Arterton look at herself in the mirror and change her life!)

Canadian EDM star Deadmau5 makes an appearance as himself at a party playing a set. (Cool)

The Shorts Skyvan aircraft taking off near the end of the movie, is the same one that was used for the movie Welcome to the Jungle (2013), with tail number N106SW, and it was the property of MN Airlines until late 2014. (And now is presumably owned by a movie studio? Weird)