Jamie and Patrick watch as Square HQ burns to the ground. “There’s no way Sticks and Stones got out, right?” Jamie asks, but even he can’t get his hopes up. A part of him knows that though they totally crushed Sticks and Stones’ groins rendering them seemingly incapacitated, they will be back to haunt them again. It was not their time to die. With that they thank the Rambos and turn to go. Jamie reaches out to the power in Patrick and *boop* they’re back in their apartment in Brooklyn. They discuss the future of the Rich and Poe project and how they now realize that they can only accomplish their goals together. “But you know what, making the bad Rich and Poe film can wait,” Patrick says, “this adventure through space and time to defeat Sticks and Stones shall be our final Rich and Poe masterpiece.” With studios knocking down their doors for the next Rich and Poe installment it’s not hard to get a meeting with all the big names in town, but when they finally sit down and are about to sign on the dotted line they hesitate. Is this film not their magnum opus? The film that will detail their life and passion? Be their legacy? Will they just let some big shot actors stroll in and again tie for the Best Actor Oscar? No! “We have one demand,” they say and the studio head chuckles. The franchise is a worldwide phenomenon and they will give them anything: gold. Yachts. Gold yachts. Name it. “We want to star,” Jamie and Patrick state to the shock of the studio head. He hesitates, “star? For real? Are you… are you hustling me?” That’s right! We’re watching the 2019 remake of Dirty Rotten Scoundrels, The Hustle starring Anne Hathaway and Rebel Wilson. I only know one thing about this film: it’s always playing on about 50% of the video screens on airplanes. People can’t get enough of The Hustle when they have very few other options. Let’s go! 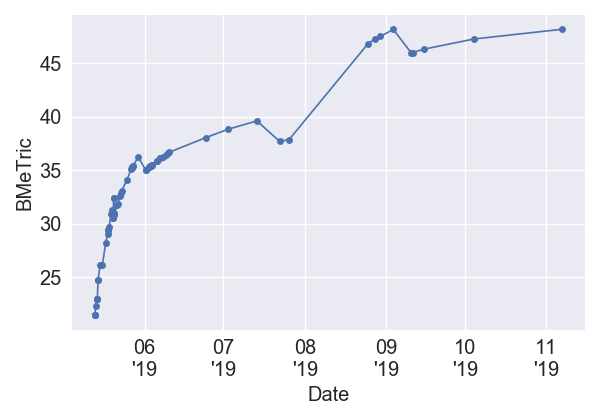 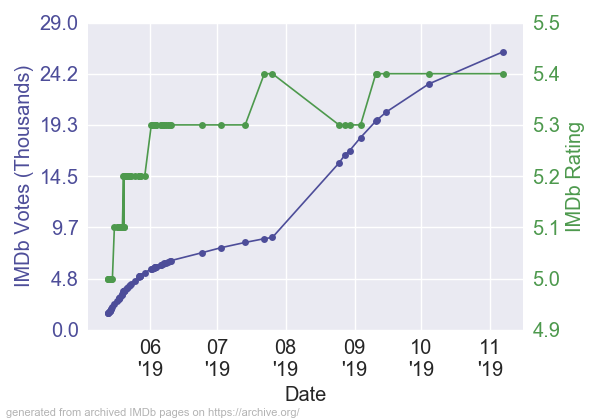 (You know … first the BMeTric is very high for a film that came out so recently. Could just be weirdo Dirty-Rotten-Scoundrel fans kicking off online, who knows. But the notability is really low I feel like. Big comedies should typically have big guest stars … this is why I need to do some genre analyses for notability. I have no feel for the metric yet. I like it though, very interesting stuff.)

RogerEbert.com – 2 stars –  “The Hustle,” a con comedy starring Anne Hathaway and Rebel Wilson, is light and slight and utterly forgettable as soon as it’s over. It is the kind of movie you watch on an airplane—perhaps on the way to someplace luxurious and relaxing like the South of France, the film’s setting—while falling in and out of naps.

(So pretty meh. Hmmmmmm, was there really not a better more interesting comedy to watch here. Quickly checking my notes suggests it was Madea or this so … well at least with this I have an excuse to watch Dirty Rotten Scoundrels.)

(I don’t know, that seems kind of like fun. I do need to watch Dirty Rotten Scoundrels though. I’ll be missing something if I don’t at the very least watch that one (if not the original as well))

Directors – Chris Addison – (BMT: The Hustle; Notes: Was a main cast member of The Thick of It, which in the US was semi-adapted into Veep (which he produced and also directed 13 episodes of).)

Dale Launer (screenplay by & story by) – (Known For: My Cousin Vinny; Dirty Rotten Scoundrels; Ruthless People; Future BMT: Eddie; Love Potion No. 9; Blind Date; BMT: The Hustle; Notes: Son of actor S. John Launer. He claims to have written the line “dead on balls accurate” for Mona Lisa Vito in My Cousin Vinny. Appears to have been retired since the mid-90s.)

Jac Schaeffer (screenplay by) – (Known For: TiMER; BMT: The Hustle; Notes: A writer on the upcoming Black Widow film and WandaVision Disney+ television show. Appears to maybe be the only original writer credited for the film.)

Rebel Wilson – (Known For: Jojo Rabbit; Isn’t It Romantic; Pitch Perfect; Bridesmaids; Pain & Gain; Pitch Perfect 2; How to Be Single; Night at the Museum: Secret of the Tomb; Bachelorette; Absolutely Fabulous: The Movie; Future BMT: Pitch Perfect 3; A Few Best Men; Grimsby; Small Apartments; Struck by Lightning; Ice Age: Continental Drift; BMT: Ghost Rider; The Hustle; What to Expect When You’re Expecting; Notes: Her two sisters appear to have competed in The Amazing Race Australia at some point, which is fun. Although they only managed two episodes.)

Alex Sharp – (Known For: To the Bone; How to Talk to Girls at Parties; BMT: The Hustle; Notes: Won a Tony in 2015 for The Curious Incident of the Dog in the Night-Time.)

(That is actually probably pretty good. Although I’m sure the expectation was higher, you’d maybe want $50 for a comedy, but worldwide that isn’t horrible.)

Rotten Tomatoes – 14% (21/149): The Hustle’s stars might make an effective comedy team in a different setting, but this gender-flipped remake of a remake adds little beyond its feminine twist.

(Hmmmm that doesn’t sound great. Neither does all the reviews suggesting it feels super long because it is boring. Like this one … Reviewer Highlight: Even with a running time of 93 minutes, The Hustle felt about an hour too long. – Richard Roeper, Chicago Sun-Times.)

Poster – The Hustle and Bustle (B-)

(Striking poster. Truly awful font. And a classic case of really just using the stars for the marketing and not really needing the poster to tell a story. Obviously smart, when that’s your strength. Bumping it up because the color really does draw the eye. Very memorable.)

(God damn it. Why? Why would you willingly draw even more comparisons to the classic comedy that you are remaking? Also, is that really the audience you are trying to draw in? People who know what Dirty Rotten Scoundrels is? Don’t you want young people or something? I just really hate self-referential taglines.)

(The lull from around 2004 to 2014 is interesting. 2014 is basically Focus and Now You See Me. The early 2000s is basically Ocean’s Eleven and its various knock-offs. I think out of all of the future BMT The Pest is probably the weirdest and most interesting since against all odds I’ve already seen that film. Looking at the BMT list this is the first movie where a con is front and center to the plot of the film. Looking back at the future options, those do seem rare.)

Notes – Because the film’s PG-13 rating was originally an “R,” Rebel Wilson had to go out and argue with the board that the film was no raunchier than similar comedies that had received PG-13 ratings featuring male actors. Her efforts prevailed.

Anne Hathaway said in an interview on Good Morning America (aired on 5/7/19) that she avoided performing a traditional English accent for this film. She said that audiences know she’s American and could potentially scoff at her numerous English characters. So, because her character Josephine is a con artist, Hathaway performed as if maybe Josephine is not actually English at all but speaks in an English accent as another con.

The airport scene is filmed at Farnborough Airport in front of the terminal building. (That’s in London BTW, for private jets basically)

Alex Gaumond, the actor playing the Waiter on the Train featured at the beginning of the official movie trailer, is an Olivier Award nominated actor who starred in the stage adaptation of “Dirty Rotten Scoundrels” at the Savoy Theatre, in London’s West End. In the stage production, he starred opposite Robert Lindsay and played the role of Freddy Benson, which was played by Steve Martin in the original 1988 movie Dirty Rotten Scoundrels (1988), and by Rebel Wilson in this remake.