Rod sets up behind a large plant with some pretty snazzy spy tech. Everyone probably assumes that the badass private eye is just a pretty face, but it’s the 21st century and he’s now a technological wizard too. So far he hasn’t gotten anything particularly incriminating against Jamie and Patrick. It’s almost been three weeks and all he’s seen them shoot is several hundred takes of Jamie running down an alley. “But what do I know,” he thinks, as he levels the camera on Jamie.

Jamie gets the sense that someone’s watching him, but when he turns his head nobody’s there… how strange. He shakes his head and goes back to watching the latest set of dailies from 4Rich’r 4Poe’r: Dimension: Time. Patrick walks in carrying a plate of croissants and joins him. The cast is dope, the script is bomb, and the French Riviera is beautiful this time of year, but they both feel like something is missing. Helicopter cruise ships? No they already got those… a sixth bad guy? Perhaps, but everyone knows once you get past five antagonists it’s really diminishing returns at that point. Again the hairs raise on Jamie’s neck and he’s now certain that someone is watching him. He ain’t afraid of no ghosts and with a signal to Patrick they backflip their way off the couch and surprise the spy with their patented Twin Chop. “Rod?” Patrick asks, surprised to see their go-to private eye splayed on the ground. Embarrassed, Rod explains the situation. Jamie and Patrick stare stormily at him and tell him to go back and tell Adam three things: 1. Double their salary. 2. They now get final edit. 3. The bad guy is now a ghost. Rod stares at them in horror. That’s right! We’re hitting up one of our favorite horror franchises (seriously) with the latest entry in The Conjuring Universe. The Curse of La Llorona is only tangentially related to Annabelle, but that’s enough to get our butts in the seats… that and some not very good reviews. Let’s go! 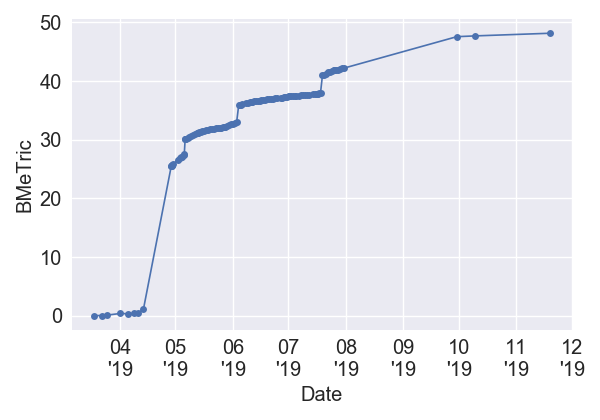 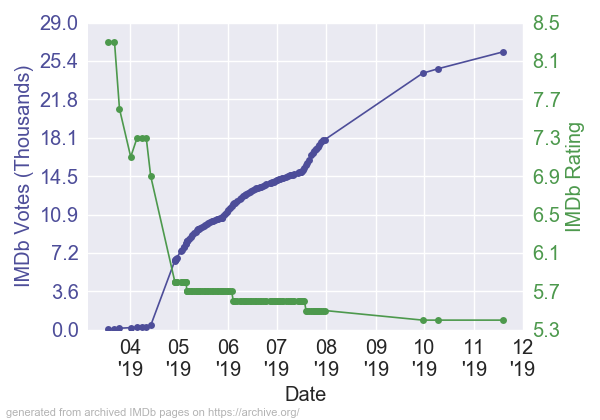 (Dropped like a stone after early positive reviews presumably from die-hards. Mid-5s is about right for a bad horror film, so I expect nothing less than a disappointingly banal film in the end)

RogerEbert.com – 2.0 stars – Perhaps the film’s most grievous sin is that it isn’t very scary. … [I] wonder if part of the reason the Garcia family lacked cultural ties was an attempt to appeal to all U.S. Latinos, but in losing that cultural specificity, I lost the connection to what makes our ghost stories “ours.” While it was fun to watch a big budget horror movie finally play in the fertile grounds of Latinx superstitions, I wish we had a better reason to break out our sage.

(Hmmmmm, that criticism actually makes a ton of sense. La Llorona is very specifically Mexican so mixing cultures does seem to kind of water that down.)

(I think on the one hand the trailer is good because it doesn’t give away much and doesn’t give away a lot of the scares presumably since it focuses on the first time they meet Mrs. Llorona. On the other hand it doesn’t seem scary at all, and the monster design looks lame. So that isn’t good.)

Directors – Michael Chaves – (BMT: The Curse of La Llorona; Notes: A young director who was tapped for this and also, now, Conjuring 3. He did a few shorts, including a Billy Eilish music video, so perhaps that’s what convinced the producers.)

Writers – Mikki Daughtry (written by) – (Known For: Five Feet Apart; BMT: The Curse of La Llorona; Notes: Not much about her, although I found the 2013 Blacklist where her and Iaconis has a screenplay entitled “Elsewhere”.)

Tobias Iaconis (written by) – (Known For: Five Feet Apart; BMT: The Curse of La Llorona; Notes: It seems like Mikki Daughtry and him have been a writing team since 2013, so it is extremely likely they have had their fingers in tons of scripts over the years without credit. Prior to that pair up though he managed a writing credit on Behind Enemy Lines: Colombia.)

Patricia Velasquez – (Known For: The Mummy; The Mummy Returns; Committed; Future BMT: Beowulf; Turn It Up; Mindhunters; BMT: The Curse of La Llorona; Notes: Venezuelan, she grew up poor and has mainly been a model in her career.)

(A huge success, as all horror films seem to be. This continues the Conjuring Universe dominance though, which I like because I somehow like all of these films. Go figure.)

Rotten Tomatoes – 29% (51/176): Content to coast on jump scares rather than tap into its story’s creepy potential, The Curse of La Llorona arrives in theaters already broken.

(Boo, sounds like The Nun. It seems like a consistent problem with these spin-offs. That all of the set up, and lore building sinks things, so maybe La Llorona 2 or Nun 2 can save those spin-offs. Maybe bodes well for Conjuring 3 though. Reviewer Highlight: …we were cursed with the annoying and shrieking but not even close to terrifying La Llorona. – Richard Roeper, Chicago Sun-Times)

Poster – The Curse of Los Sklogronos (B+)

(What a very strange poster. I guess props to them for trying something different. I would have thought they would do something similar to The Nun, but boy they went for it. Not real scary though… slightly creepy. I do like the framing and the little twist on the font. Nice touches. Certainly tells a story… almost too much of one.)

Tagline(s) – She Wants Your Children (C-)

(Huh… just kinda putting it out there. Well, no. She can’t have them. Does she want anything else? It almost feels like one person worked on the poster and the tagline and was like “perfect” after their first draft. “She Wants Your Children.” Nailed it. It’s true.) 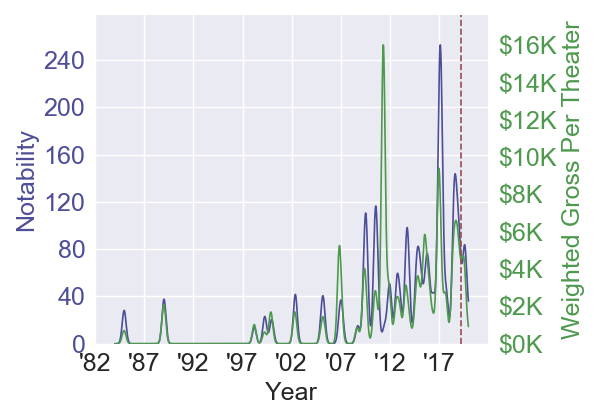 (I at one point posited a theory that the ‘08 financial collapse made Hollywood retreat to only the safest of the safe bets and out of that grew a very safe business where low-risk properties, like sequels and spin-offs, dominate. Looking at this plot I now think that could have been a coincidence. It will be the story of the ‘10 though, that of universes, sequels, and spin-offs and whatever feelings you have about that.)

Notes – This is the second film in the Conjuring Universe to not feature, or reference, Ed and Lorraine Warren. It’s also the first spin-off to feature an antagonist who didn’t appear in the main film series.

The first of two movies in The Conjuring Universe to be released in 2019. The second is “Annabelle Comes Home”. This is the first time two movies in The Conjuring Universe are released in the same calendar year. The “Annabelle” movies are also referenced in “The Curse of La Llorona”. (Wait … the movies are? Oh no, I bet it is like a Raggedy Ann film type thing, since that is what Annabelle is supposed to be I think)

The lowest grossing movie in The Conjuring Universe. (Still made absolute bank, it has a $6 million budget!)