To celebrate the inception of the new calendar we will be ending the year with a Stallone Day! So, Happy Stallone Day! There won’t be a Stallone day for several years so relish it. As usual we would like for the film to not only star Sylvester Stallone, but to also lead nicely into the first cycle of the 2016 calendar. We have discussed and debated it and decided that the first cycle will be called Aaaiiiirrrrbbbbbaaallllll! and will be movies that feature (or hopefully star) former or active professional athletes. Without further ado, the first Stallone Day in history will be the 1989 classic Lock Up which features Sly Stallone as Frank Leone and Frank McRae in the role of Eclipse. McRae appeared in 6 games for the Chicago Bears in 1967. Let’s go! 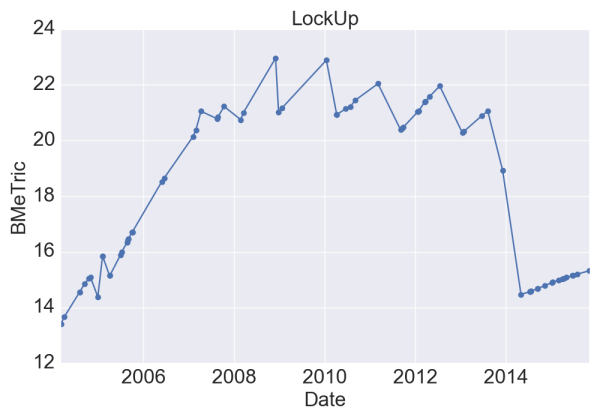 (Not bad for a 1989 film. Still not super high. I believe this has a bit of cult popularity associated with it playing on cable through the 1990’s. So I wouldn’t be surprised if the score was slightly deflated. Patrick’s Note: It most certainly is. The rating in 2004 was 5.4, it is now 6.3 on IMDB. It has clearly dropped significantly recently.)

Leonard Maltin – 1.5 stars – With six months to go on his sentence, convict Stallone gets abducted from his country-club cell and transported to a hellhole run by old Hun-like adversary Sutherland. Missing are Linda Blair, John Vernon, a lesbian guard, and 15 gratuitous showers; you do get a body-shop montage backed by Ides of March’s ”Vehicle.” Bottom of the world, ma.

(Hun-like? What a weird thing to say. Guess Leonard really wanted to figure out the most tasteful way of saying that Sutherland is like a Nazi in the film. Then the whole review goes off the rails. I had to look up what the second sentence means. I guess he’s making a reference to the exploitation film Chained Heat. Finally, I have no idea why he makes a White Heat reference at the end. Maybe the end of the film is similar to the end of that film? Bar none the weirdest Maltin review I’ve ever read.)

(Uh… yes please. That looks amazing. It’s like a full movie of just the prison escape scenes from Tango & Cash.)

Director(s) – John Flynn – (Known For: Rolling Thunder; Best Seller; BMT: Lock Up; Out for Justice; Brainscan; Notes: Died in 2007, and was in the Coast Guard. Studied journalism at UCLA under the tutelage of Alex Haley, the author of Roots.)

Writer(s) – Richard Smith (written by) – (BMT: Lock Up; Notes: Recently passed away. He apparently did some work on a couple of the James Bond films and wrote a novel published in 2010)

Henry Rosenbaum (written by) – (Known For: ; BMT: Lock Up; The Dunwich Horror; Hanky Panky; Notes: Nothing of interest about him. Weird.)

Jeb Stuart (written by) – (Known For: Die Hard; The Fugitive; Next of Kin; Vital Signs; Blood Done Sign My Name; Hart’s War; BMT: Another 48 Hrs.; Lock Up; Just Cause; Fire Down Below; Leviathan; Switchback; Notes: Wrote an early draft of Indiana Jones and the Kingdom of the Crystal Skull.)

(A definitive bomb for Stallone. This was smack in the middle of a disastrous run of films for him so he might have just started to wear out his welcome. After First Blood in 1982 he followed with Staying Alive, Rhinestone, Rambo II, Rocky IV, Cobra, Over the Top, Rambo III, Lock Up, Tango & Cash, Rocky V, Oscar, and Stop! Or My Mom Will Shoot. Oof.)

(Never trust the RT on a movie this old (like Weekend at Bernie’s is a downright mediocre film according to RT). It’s nice that it’s low, but the Razzie recognition, Leonard Maltin review, and BMeTric are more important in this case.) 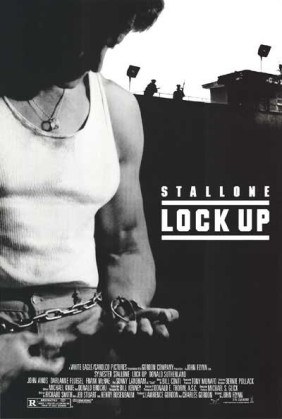 (Looks pretty cheap but I guess the artistic take is nice. I’ve seen this same poster with red coloring on the letters and/or sky, which I like a bit more. But this seems official.)

How many times can a man be pushed to the wall…before he goes over it? (C-)

Stallone…behind bars? Not for long. (Hah)

He is only six months away from freedom. But a warden obsessed with revenge wants to take his future away. (D)

(I usually just grade the tagline that is found on the poster (which I consider official), but there isn’t one on the main poster and these are too good not to grade. They are all either too long or bonkers insane. The first and second use super weird phrasing to make their point. The third is hilarious… I can hear Stallone saying those words. The fourth is classic 70’s/80’s tagline.)

Notes – The cast includes real inmates of Rahway State Prison which is also known as East Jersey State Prison as it is located in Rahway, New Jersey, USA. A number of the prisoners appear as extras and background artists in the movie. (This is the prison I taught at in New Jersey. It’s got a very distinctive look. I wonder if I’ll recognize some of the places they show.)

The movie was nominated for three Golden Raspberry Awards at the 10th annual ceremony including Worst Picture, Worst Actor – Sylvester Stallone and Worst Supporting Actor – Donald Sutherland, but the film failed to take home a Razzie in any category.

Actor Frank McRae, who participates in the football game sequence, had actually played gridiron as an NFL (National Football League) defensive tackle during the 1967 season playing six games for the Chicago Bears. (There it is).

Danny Trejo: As a gang member of Chink’s gang. (Keep a lookout)