This week we move right back into our Calendar cycle for the Razzie entry. Since the calendar is amazing and affords us amazing choices for movies each week, we of course were able to choose a past Razzie Worst Picture winner! That’s right, we are watching 2006’s Basic Instinct 2! Quite literally the sequel that no one was asking for (and perhaps many begging Hollywood not to make). Released on March 31st, it beat out The Skulls for the honor. Thank God. We’ve (obviously) already seen The Skulls. Let’s go!

Leonard Maltin – 2 stars –  Long-gestating sequel to the notorious 1992 hit isn’t the embarrassment you might have expected – or hoped for. What should have been high camp is instead a rather dull psychological-sexual thriller in which slippery novelist Catherine Tramell is up to her old tricks in London when a male companion turns up dead in her car. Did she or didn’t she? Stone makes the best of this and looks sensational while the impressive British cast tried hard to keep it afloat.

(Wow, I was not expecting the classic two star Maltin for this one. I like his creeper comment on how good Stone looks, keep it up Maltin. Dull is bad, but perhaps he was so distracted by the gorgeous magnificence of Stone that he couldn’t focus on the enthralling psycho-sexual thrill-ride that was this film? We’ll have to see.)

Directors – Michael Caton-Jones – (Known For: This Boy’s Life; Doc Hollywood; Rob Roy; Memphis Belle; City by the Sea; Scandal; BMT: Basic Instinct 2; The Jackal; Notes: He has bad-mouthed this film and Sharon Stone several times in interviews over the years and openly admits he only did it for the money. Despite this, he does a commentary for the film, which is very exciting. Nominated for the Razzie Award in 2007 for Worst Director for Basic Instinct 2) 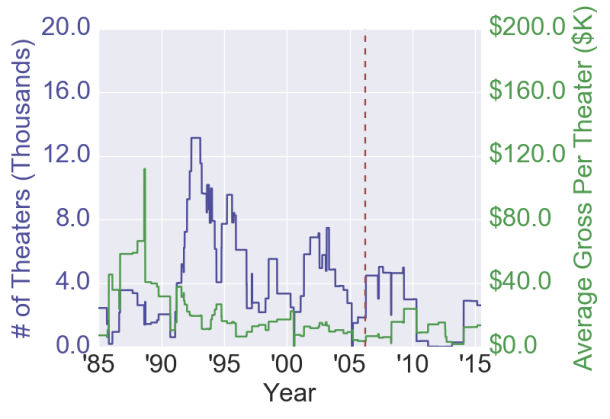 #43 for the Thriller – Serial Killer genre

(oooof, what was our fascination with serial killers in the 2000s? The show Dexter was right in there as well. This comes right before one last hurrah in the genre before a complete and utter collapse. And recently (The Following, Hannibal) the genre has gotten play in a little wave, but is probably dying again. Looking through things it was basically the Saw series sustaining that, and looking at the actual money being made the genre is kind of moving to microbudget/VOD releases I think. The movie, incredibly, marks an attempt at two 90s genres that are both now on the brink of total collapse. Fascinating.)

Rotten Tomatoes – 7% (10/150): Unable to match the suspense and titilation of its predecessor, Basic Instinct 2 boasts a plot so ludicrous and predictable it borders on “so-bad-it’s-good.”

(Just like with The Day the Earth Stood Still I think it’s generally a mistake to have a skewed perspective in the poster (which is the effect that the weird shadow creates). I do like the idea that the poster is from the point of view of someone getting murdered and we are looking through his half-closed eyelids. Interesting and artsy and polished in that way. The brown tone isn’t great and too much going on, though, so overall slightly below average. If they had kept it a bit simpler it probably would have gotten a much better grade.)

Tagline(s) – Everything interesting begins in the mind. (F… I think.)

(I can’t believe this ended up on the poster… what does it mean?! It’s an unsolvable riddle. This is one of the worst and most incomprehensible taglines I’ve ever seen for a film.)

(I shouldn’t have been so surprised to see all the horror films on the list. Psychology, of course, often plays a prominent role in horror. Either in the form of dealing with past trauma or by those attempting to understand the machinations of madmen. The Halloween series, interestingly, often has both. Donald Pleasence plays a prominent role in five of the Halloween films, whereas in the long running series the “survivors” of each movie often deal with the psychological aftermath in subsequent movies. Not a pure keyword, but interesting.)

Notes – Michael Douglas declined to reprise his role from the original movie, admitting that he felt he was too old for the part. (yah think?)

Robert Downey Jr. was set to star but had to drop out when he was charged with drug possession. Kurt Russell was attached at some point but bailed out because he felt uncomfortable with the nudity. Pierce Brosnan refused to play the male lead role because of distasteful elements. Bruce Greenwood was set to star but dropped out because he hadn’t been signed on yet and feared the actors strike. Benjamin Bratt was banned by Sharon Stone for not being a good actor. (Poor Benjamin Bratt. Also, these casting choices must go back a while. RDJr. hasn’t been busted for drug possession since 2001)

Before agreeing to perform the full-frontal nude scene, Sharon Stone invited a friend over to watch the original Basic Instinct (1992). During the film, Stone, by her own admission, stripped down totally naked and asked her friend if she could “still pull it off.”

Rupert Everett publicly expressed his anger after being turned down to star opposite Sharon Stone by MGM CEO Chris McGurk for being “pervert who would never be accepted by the American public in this role”.

The film was originally intended to be made in 2000. (there we go)

Sharon Stone agreed to reprise her role of Catherine Tremell in a “pay or play” arrangement, meaning she got fully paid, whether the film would ultimately be made or not.

Jude Law, Ewan McGregor, Gabriel Byrne, Javier Bardem, Benicio Del Toro, Viggo Mortensen and Aaron Eckhart were all in the running to star opposite Sharon Stone at one point. (So many people considered and yet they ended up with David Morrissey… huh)

David Cronenberg was in talks to the direct the film for some time. John McTiernan was set to direct after Cronenberg bailed out due to producer Mario Kassar banning him from using his own cinematographer, production designer, and the rest of his usual team. (sound like a lot of people were banning other people)

Won the Razzie Award for Worst Prequel or Sequel

Nominated for the Razzie Award for Worst Screen Couple

Nominated for the Razzie Award for Worst Director (Michael Caton-Jones)