This week we continue our 2016 pre-Razzies festivities with the worst Horror/Thriller we haven’t watched. (“Boo! A Madea Halloween?” shouts the crowd). Unfortunately no. Won’t be on DVD for a while… sigh. Usually this is a slam dunk category even without a Madea film, but this year was oddly bereft of bad horror. Everyone did an adequate or good job with totally random films like Ouija 2. So we were left with the traditional January horror film release. This year that spot was taken by a film called The Forest. The most interesting thing about this film is that it’s the third film in four years that involves the Aokigahara Forest in Japan. These are The Forest, 47 Ronin, and The Sea of Trees. It’s a natural BMTril-oh-geez! One step at a time. Let’s go! 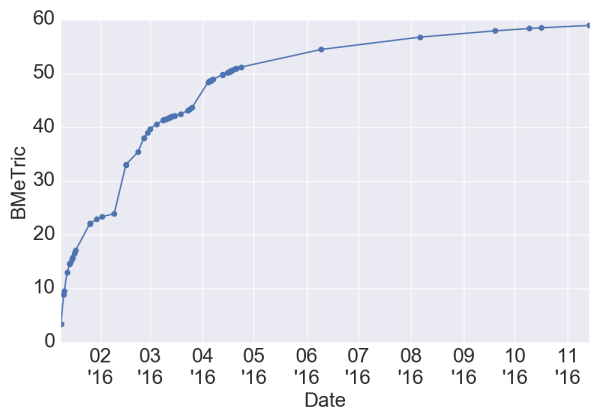 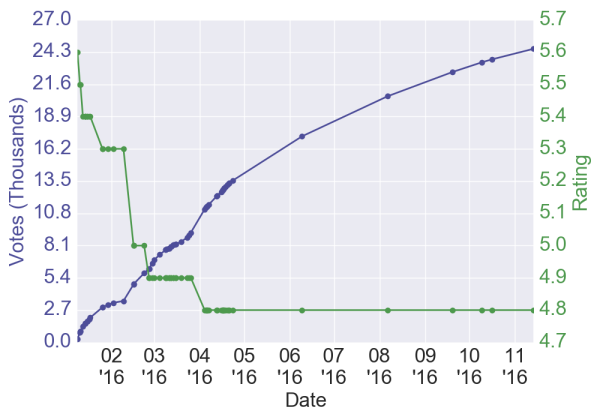 (The BMeTric is startlingly high. Like crazy. Horror films have a very large built in audience (another reason it is very easy to generate return in the genre) but also tend to be, in general, rated worse than other genres. The triple regime is back, although I think I know what in this case. The first section is domestic theatrical release, the second bump is the foreign release (you can almost see two bumps too, Germany on February 4th and then UK/Spain on February 25th), and then the final section is VOD release.)

RogerEbert.com – 1.5 stars –  The admiration for the little that Zada does differently in the early sections of “The Forest” does not last for long, as the movie repeatedly hits the same beats over and over again. Zada’s film ends up feeling like an extended journey to a predestined shrug of a conclusion.

(This review was interesting because it describes the debut filmmaker’s approach as rather refreshing to start. As a matter of fact this is something I’ve been hearing a lot recently. That the crop of new horror filmmakers have brought life to things that shouldn’t have life (Ouija 2 is a perfect example, a prequel to an absolutely horrible horror film shouldn’t be good let alone great!). I’ve been hearing chirps about this new generation being tapped to revitalize a set of classic horror franchises (like Nightmare on Elm Street, Friday the 13th, etc.). It’s an interesting, although I think misguided, idea. In reality I would like to see the franchise paradigm come back. It has to an extent, but I mean with a progressively fleshed out and explored primary villain like Freddy, Jason or Michael Myers. We’ll see if Zada is part of the crew who will be doing some of that in the coming years.)

(Yeah, I don’t think this movie is scary. I think that is the ultimate problem. You can kind of get that feeling. I like that it seems like it goes more for the eerie over the jump scares (that’s what I’m getting here), but it doesn’t seem like it is going to work ultimately.)

Directors – Jason Zada – (BMT: The Forest; Notes: Zada started as a digital marketeer. He was the creative lead for what ultimately because a 65-person agency and has lead projects for Office Max and government PSA. He left the company to pursue a film career starting with music videos. This is his first feature film.)

Writers – Nick Antosca (writer) – (BMT: The Forest; Notes: He is a novelist actually, with five books in his bibliography. Besides that though he appears to be a huge horror film guy, writing to CW’s Teen Wolf, operating SyFy’s Channel Zero, and producing 13 episodes of Hannibal. He has been tapped to write the new Friday the 13th (so there we go, the new generation, although directed by the guy who directed The Last Witch Hunter, feels like an uninspired choice))

Sarah Cornwell (writer) – (BMT: The Forest; Notes: Another novelist she has written a single book and this is her one and only screenwriting credit. She has a website in which it talks about how she’s from Pennsylvania and I think went to UT-Austin, but nothing stands out really. The book is supernatural so I wouldn’t be surprised if she is eventually tapped for another supernatural horror gig)

Ben Ketai (writer) – (BMT: The Forest; Notes: Started out with horror shorts and web series and eventually landed a few projects with Crackle and SyFy mostly focused around ghost stories. There isn’t much about him personally floating around, but he is tapped for the sequel to the well-regarded recent horror film The Strangers. I’m going to be honest, this seems like a pretty solid set of young writers and a solid directing choice given the budget, I’m surprised that with Dormer in the lead role it didn’t come together at least slightly better.)

Actors – Natalie Dormer – (Known For: The Hunger Games: Mockingjay – Part 2; Captain America: The First Avenger; Rush; The Hunger Games: Mockingjay – Part 1; The Riot Club; Casanova; Flawless; BMT: The Forest; The Counsellor; W.E.; Notes: Basically the only person we should talk about with regards to this film. She is well known for her roles in The Tudors and Game of Thrones. She is engaged to Anthony Byrne who has directed multiple episodes of many British television series including Mr. Selfridge and Ripper Street. She is one of the first Game of Thrones alums to start testing the waters in leading film roles, specifically this movie. We’ll see if she can make the transition more successfully than someone like Richard Madden who, outside of Cinderella has somewhat retreated back into smaller television roles.)

(It is pretty easy to make bank on horror films. You make them for $10 million or less and you’ll get a return if you can release it. With Dormer in the lead role (and her prominent role on Game of Thrones) I would think this would get released no matter the quality, just had to get something on film.)

#75 for the Horror – Supernatural genre

(Holy shit! What could have possibly happened in 1999 to precipitate that? Oh yeah, Blair Witch and The Sixth Sense came out within a month of each other. My guess is that line will just keep on rising until the green lines starts dropping. The more movies they make it doesn’t seem to affect the gross per movie so … why would they stop? #75 puts it right near One Missed Call! Classic, we need to watch that at some point for sure. )

Rotten Tomatoes – 10% (12/120): The Forest offers Natalie Dormer a few chances to showcase her range in a dual role, but they aren’t enough to offset the fact that the movie’s simply not all that scary.

(Boo. I kind of expected this, but at the same time it is kind of annoying when a movie is just gross, or just boring. I have a feeling this will be more gross than boring in the end, which is worse for me to be honest. We’ll see though.) 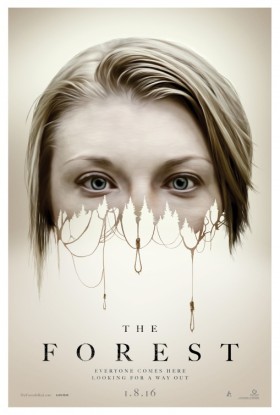 (It is a striking poster. Love the silhouette forest that makes up the edge of the face. Love how they subverted the idea of the normally off-putting flesh coloring of the human face by making the entire poster a light tan color (although I still don’t love the color itself). Could have done a little better with the text font… there seems to be a slight fading, but not unique enough. It’s a beautiful poster that tells a story.)

Tagline(s) – Everyone comes here looking for a way out (B+)

(Daaaaaaaaaang. Check out the pun on this guy. It is pretty fucking clever. I was going to give it an A+ but then it kind of rattled around in my brain. It doesn’t really make as much sense as you would hope given how clever it is. Like it makes perfect sense for suicide, but for the alternate meaning of “looking for a way out,” it falls apart… because no one goes somewhere looking to find a way out of where they went. Damn. Still, it sounds great.)

(BTW I think this is a record: there are zero keywords marked relevant for this film. I let this guy fly because it seemed to appropriate and I was curious about the outcome … yeah, there aren’t really any other movies with this keyword. The other one there also got 10% on rotten tomatoes, oof!)

Aokigahara, known as the Suicide Forest or Sea of Trees, is a 35-square-kilometre forest lying at the north-west base of Mount Fuji in Japan. The forest has an association with demons in Japanese mythology, and is a common suicide site; a sign at the start of the main trail urges suicidal visitors to contact a suicide prevention association. There have been two recent movies inspired by this premise, Grave Halloween (2013) and The Sea of Trees (2015), both released before The Forest. (Will there ever been a well received film with this forest as a prominent plot point? Scientists maintain we may never know)

When Natalie Dormer’s character is first browsing information about the Aokigahara forest, the photos on her screen are real, taken from actual recovery parties that, annually, scan the forest to retrieve human remains. Among the pictures (though blurred) is the infamous “half face” man that also inspired the film’s poster.

The poster for the film features Natalie Dormer’s face with the bottom half removed, and the dividing line forming a silhouette of treetops and dangling nooses. This bears a clear resemblance to an infamous image of the body of an actual suicide victim of the forest, a bald man found in such a decomposed state that his jaw had fallen off and strips of flesh were hanging from where it had been. The image is also replicated in the film, albeit in a slightly less grotesque form. (gross)

In order to differentiate the twin sisters, Natalie Dormer had to dye her hair black while playing Jess and keep blonde hair as Sara. This was also to insert ying-yang symbolism; Sara was always the more innocent and pure sister, hence her blonde hair, while Jess was always more psychologically troubled and sad, hence her black hair. (Didn’t think that was going to be interesting, but it was.)