Finally we come to the end of the first year of the Stallonian calendar. This year (like most years) will end on a transition from the final “2016 in film” cycle into the first cycle of 2017. For that cycle we have selected [drumroll]…[still drumrollling]… [still]… [still]… [finished drumrolling]… [jk! Still going]… [now I’m done]… [or am I?]… [I am] Squeakuels Please! This is just a fancy way of saying that we are going to get a shitload of bonus films under our belt in the new year. That’s because many of the horrendous sequels we will be viewing also have equally horrendous first entries that must be watched. Hooray! That can’t be said for the transition film, though, as we are viewing 2016’s Independence Day 2. The first one was a work of art of my childhood. Probably seen it a dozen times. As a result the sequel stands as a perfect transition as it will likely find its way on the Razzie ballot by virtue of its name recognition, but also has a good chance of entertaining me. Let’s go! 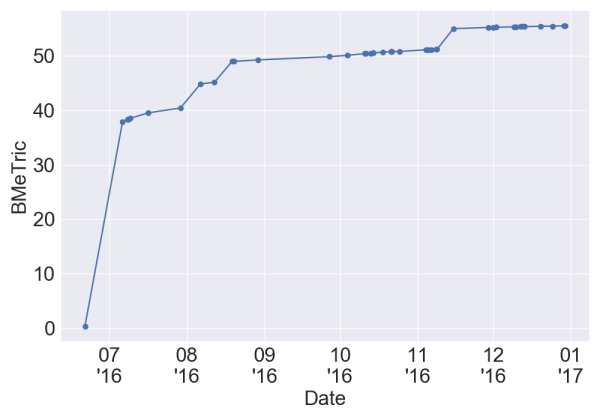 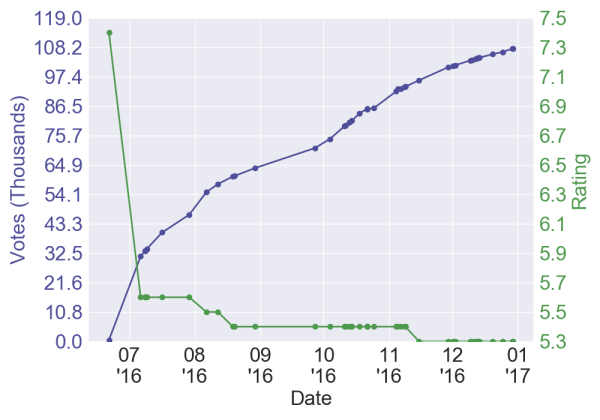 (Ha! Definitely brigading at the start. I would assume that is a relatively new strategy from production houses to plant good reviews on blockbusters … or it has a passionate fanbase. One of the two. Who knows. Otherwise the only remarkable thing is that it is quite bad (50+) and very very quickly got there by just dive bombing below 6.0 almost immediately upon release.)

RogerEbert.com – 1.5 stars –  “Independence Day: Resurgence,” the sequel you probably didn’t want or need to the 1996 smash-hit blockbuster “Independence Day,” is all about the spectacle. And yes, all massive summer disaster pictures are like that—especially when they come from director Roland Emmerich, returning from the original “Independence Day.” Shock and awe are his bread and butter. But “Resurgence”—which, surprisingly, isn’t the title of a fourth “Divergent” movie—feels even more shiny and empty than most of these kinds of films.

(Sounds about right. That is the theme for the year actually and kind of a fitting end to the 2016 Bad Movie Season. Empty. The bad movies this year, besides Mechanic 2 which was banananananas, felt empty. A whole lot of nothing about nothing for no one. The good news: 2017 looks to be solid already with a chock full January and February schedule that promises a kick ass BMT Live! A boy can dream.)

(I remember really disliking the marketing for this film. Thought it looked too Transformers-y. Everything looks fake and too futuristic. Like the first film was grounded in reality, a world you could imagine living in. This world is now too tied up in the events of the first film and alien technology.)

Writers – Nicolas Wright and James A. Woods (screenplay & story by) – (BMT: Independence Day: Resurgence; Notes: Writing partners and oddly both are much bigger actors than writers in the television world. They have been tapped for the Stargate reboot, which should be coming out sometime in the future.)

Dean Devlin (screenplay & story by & based on characters created by) – (Known For: Independence Day; Stargate; Universal Soldier: Day of Reckoning; BMT: Universal Soldier: The Return; Godzilla; Independence Day: Resurgence; Universal Soldier; Notes:  Nominated for the Razzie Award in 1999 for Worst Screenplay for Godzilla; Nominated for the Razzie Award in 1997 for Worst Written Film Grossing Over $100 Million for Independence Day; Ha! He was an actor in Real Genius of all things. He’s also a producer and actor and the writer of the upcoming (hopefully) BMT smash hit Geostorm starring Gerard Butler. He is a major mover and shaker it would seem, producing all of the different iterations of the Librarian series)

Roland Emmerich (screenplay & story by & based on characters created by) – (Known For: Independence Day; The Day After Tomorrow; Stargate; BMT: 10,000 BC; Godzilla; Independence Day: Resurgence; 2012; Notes: See above for Razzie notes; Stargate put him on the map and with Independence Day 2 and the upcoming Stargate reboot it looks like he it returning to his roots. I vaguely enjoyed the ridiculousness of his films, but these types of action films tend to be rooted in a cynical irony these days that I don’t personally enjoy. Hopefully Emmerich keeps up the earnestness.)

James Vanderbilt (screenplay) – (Known For: The Amazing Spider-Man 2; The Amazing Spider-Man; Zodiac; White House Down; Truth; The Losers; The Rundown; BMT: Darkness Falls; Independence Day: Resurgence; Solace; Basic; Notes: It is kind of nuts how many different writers they got in on this screenplay. This guy is obviously huge for the Spider-man films, but has been consistently working since his debut with Darkness Falls. He is the writer for Meg, the giant shark movie starring Jason Statham coming out in 2018.)

Bill Pullman – (Known For: Independence Day; The Equalizer; While You Were Sleeping; Spaceballs; Sleepless in Seattle; A League of Their Own; American Ultra; Lake Placid; Casper; Lost Highway; Singles; Brother Nature; The Killer Inside Me; Wyatt Earp; LBJ; Titan A.E.; Ruthless People; Bottle Shock; Malice; Zero Effect; The Last Seduction; Igby Goes Down; BMT: Scary Movie 4; Independence Day: Resurgence; Mr. Wrong; Lucky Numbers; Cymbeline; The Grudge; Lola Versus; The End of Violence; The Favor; 29 Palms; Sibling Rivalry; Bringing Up Bobby; Newsies; Notes: I will always love him for his starring turn in Spaceballs. He’ll next be seen in a western: The Ballad of Lefty Brown.)

(Close to a success although incredibly disappointing from the original’s high bar. Taking a pretty standard half and third cut for domestic and foreign grosses you are looking at 150 million or so. You might come back with marketing, but I would assume it made that much and more back in product placement and eventual home video profits. Again, modest success. Curious to see if they do go for a third trying to make it a bit better launching off of the base they created here.)

#17 for the Sci-Fi – Alien Invasion genre 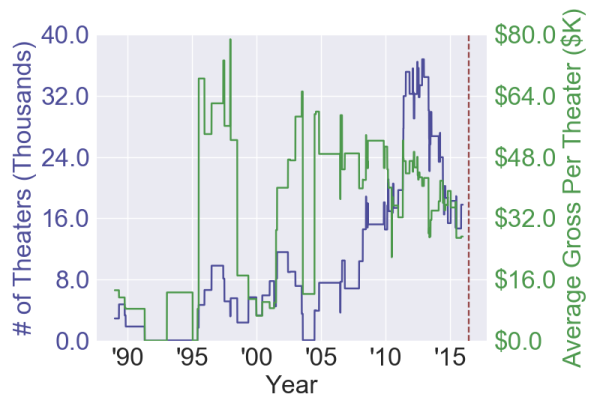 (See, District 9 and Pacific Rim are the tale of two expectations. District 9 was a giant success because of a modest budget, whereas Pacific Rim is now getting a sequel geared almost exclusively to Chinese audiences. This is much closer to Pacific Rim, with almost identical domestic and foreign takes. We’ve seen another this year (5th Wave) which did a lot worse, and we are definitely coming off of a boom time from about 5 years ago. We’ll see what takes over from there. Thinking about Zombie, Spaceship, Wasteland I do think we are probably trying to enter an alien boom again. Wasteland I think died with Divergent’s fall, and Zombie is still just dominated by Walking Dead and a bit tired. We’ll see.)

(This kind of encapsulates everything I’ve heard about the film. Most people I’ve talked to simply say,  “Was I entertained? Yeah.” So not sure how many people are looking for emotional heft in ID2.) 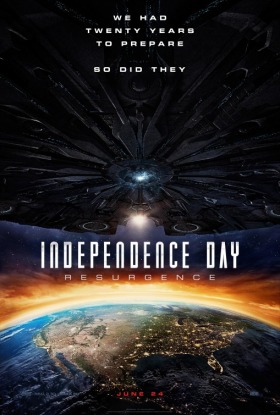 (While this poster doesn’t do a good job in some of the ways that I prefer (font and color), it is a very pretty poster. So you have to give it that. It also is incredible well spaced, so makes up for some of the shortcomings.)

(Can give it props for hinting at the plot but not much else. Pretty clunky and not super clever.)

(Well this list might convince me to watch Alone in the Dark finally. Great list, although …. Spice World prob doesn’t belong there. I vaguely remember an alien thing in it, but the keywords have to be tighter than that crap. But yeah, all above 65 and only one left? Aliens are clearly a recipe for hilarious BMT fun.)

Notes – Soon after the success of the first film, 20th Century Fox paid Dean Devlin a large sum of money to write a script for a sequel. However, after completing the script, Devlin didn’t turn in the script and instead gave the money back to the studio, as he felt the story didn’t live up to the first film. It was only approximately 15 years later, that Devlin met up with Roland Emmerich to try again, having felt that they had “cracked” a story for a sequel. (I feel like you hear this story for every sequel that comes out decades later. “We couldn’t figure it out at the time, but all of a sudden we had a story that was too good not to make… oh and $10 million dollars. That too.”)

Will Smith was supposed to reprise the role of Captain Steven Hiller, but Fox refused to meet his request for a $50 million salary for two sequels. Roland Emmerich confirmed Smith would not be returning for the sequel in June 2013 to Daily News, but mentioned that Jeff Goldblum would return to reprise his role as David Levinson. Smith later went on to star in Suicide Squad (2016). (A bit of a contentious issue. Will Smith claims it was not about the money, but that he was already committed to Suicide Squad.)

On the monument to The War of ’96 seen in Washington, D.C. towards the start of the film the name Russell Casse can be seen on a brick in the middle. Russell Casse was the name of Randy Quaid’s character who sacrificed himself to destroy the ship approaching Area 51 in Independence Day (1996). (That fact is fun)