A small note prior to this post: Last July we decided to take a look back at the movies that we watched over five years ago and choose a Hall of Fame class, five movies that we thought embodied BMT in some way. Perhaps they were particularly bad, or an example of a specific bad movie trope, whatever, something made them stand out as special in our minds. Since we didn’t do email previews back in 2011 we also decided to provide a preview for the movie. This is the first in a series of five leading up to our yearly awards the Smaddies Baddies. A recap (Hall of Fame speech really) will follow immediate afterwards to explain why the movie was chosen, things we loved about the movie, and things we discovered upon second viewing. Enjoy!

(That is a giant and sustained jump. Some may be surprised that a sub-50 BMeTric film would make it to the hall of fame (oh, only me?), but I would guess it being someone anonymous in bad movie circles lends itself to a slightly deflated vote count. Otherwise everything is pretty mundane by the looks of it, nothing to interesting here.)

Leonard Maltin – 2 stars –  Hoped-for sparks from a teaming Travolta and Williams never materialize as the pair play business partners whose big Japanese deal is disrupted when they unexpectedly inherit 7-year-old twins. The stars seem to be having a better time than the audience. Only the youngest kids are going to find this slapstick material (including Green’s antics with a lovesick gorilla) very funny. Notable only as the debut for Travolta’s daughter Ella Bleu and Mac’s final film appearance.

(Two stars?! This is the kind of harmless nothing movie Leonard wouldn’t mind. I still don’t quite understand two stars though, the movie is basically incomprehensible and terrible. How does that get two stars?)

(My God, this movie doesn’t have a storyline! How incredibly cut up and weird that is. Of course they appear to have a 20 minute foray into a camp filled with caricatures, otherwise, how in the world would they punch up the script?)

Directors – Walt Becker – (BMT: Old Dogs; Alvin and the Chipmunks: The Road Chip; Wild Hogs (BMT); Van Wilder: Party Liaison (Seen it); Notes:  Nominated for the Razzie Award in 2010 for Worst Director for Old Dogs. Apparently his trademark (according to IMDb) is having characters sing I’m All Out of Love … Mostly works in television now including the one-season show Glory Daze.)

Writers – David Diamond (written by) – (Known For: The Family Man; Evolution; BMT: When in Rome (BMT); Old Dogs (BMT); Notes: Amazing, I’ve completed David Diamond’s filmography. The only information I can find on him is he collaborated with Weissman)

David Weissman (written by) – (Known For: The Family Man; Evolution; BMT: When in Rome (BMT); Old Dogs (BMT); Notes: Same here, how very odd, there is almost no information about these people. I would guess they are mostly producers now working for a studio on comedies. Amazingly if you look at variety you come up with this fun story. That … sounds suspiciously like Old Dogs. A raucous buddy comedy announced in 2006 to be released by Walt Disney? Most def.)

Actors – Robin Williams – (Known For: Good Will Hunting; Dead Poets Society; Jumanji; Aladdin; Night at the Museum: Secret of the Tomb; Insomnia; Mrs. Doubtfire; A.I. Artificial Intelligence; Night at the Museum; Night at the Museum 2; The Birdcage; The Butler; To Wong Foo Thanks for Everything, Julie Newmar; What Dreams May Come; Awakenings; One Hour Photo; Good Morning, Vietnam; Popeye; Robots; FernGully: The Last Rainforest; The Fisher King; Happy Feet; Hamlet; The Adventures of Baron Munchausen; World’s Greatest Dad; Boulevard; The World According to Garp; Happy Feet Two; Death to Smoochy; BMT: Flubber (seen it); Toys (seen it); License to Wed; Old Dogs; Nine Months; RV: Runaway Vacation; Fathers’ Day; The Big Wedding (BMT); Jack (seen it); Club Paradise; The Angriest Man in Brooklyn; A Merry Christmas Miracle; Absolutely Anything; Man of the Year; The Final Cut; The Best of Times; The Survivors; The Big White; Noel; Hook (seen it); Patch Adams (seen it); Jakob the Liar; Bicentennial Man (seen it); Notes:  Nominated for the Razzie Award in 2000 for Worst Actor for Bicentennial Man, and Jakob the Liar; Nominated for the Razzie Award in 2003 for Worst Supporting Actor for Death to Smoochy; Obviously a legend and sadly recently took his own life. He was a staple of my childhood and also a brilliant and classically trained actor. There isn’t much more to say.)

John Travolta – (Known For: Pulp Fiction; Grease; Savages; Hairspray; Carrie; Face/Off; The Thin Red Line; In a Valley of Violence; Bolt; Saturday Night Fever; Criminal Activities; Look Who’s Talking; The Taking of Pelham 1 2 3; Phenomenon; Broken Arrow; Lonely Hearts; Urban Cowboy; Get Shorty; Blow Out; Ladder 49; Primary Colors; A Civil Action; BMT: Battlefield Earth; Look Who’s Talking Too; Look Who’s Talking Now; Staying Alive; Old Dogs; Killing Season; Lucky Numbers; Michael; Domestic Disturbance; Be Cool; Perfect; Wild Hogs; Two of a Kind; I Am Wrath; White Man’s Burden; The Devil’s Rain; The Forger; The General’s Daughter; Mad City; Swordfish; The Punisher; From Paris with Love; Basic; Notes:  Won the Razzie Award in 2001 for Worst Actor for Battlefield Earth, and Lucky Numbers; Won the Razzie Award in 2001 for Worst Screen Couple for Battlefield Earth; Nominated for the Razzie Award in 2010 and 1990 for Worst Actor of the Decade; Nominated for the Razzie Award in 2010 for Worst Actor for Old Dogs and in 2002 for Domestic Disturbance, and Swordfish, and in 1986 for Perfect, and in 1984 for Staying Alive, and Two of a Kind; Nominated for the Razzie Award in 1992 for Worst Supporting Actor for Shout; A staple of BMT. This should be obvious though considering he is in two different Hall of Fame inductees. Look at that Razzie cred!)

(How did this move make so much money. Why would anyone overseas see this film? That is flabbergasting to say the least)

#22 for the Comedy – Fish-Out-of-Water Father genre 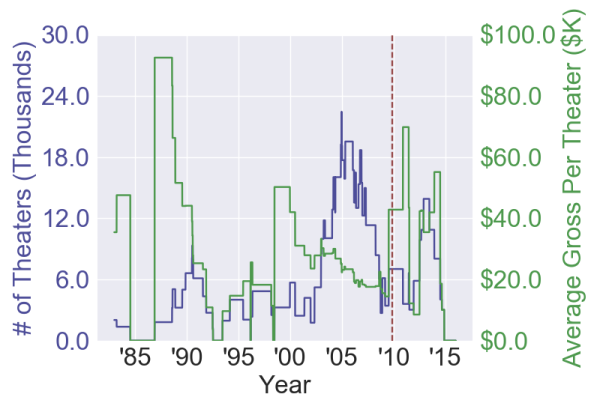 (That is below Kicking and Screaming which is just about all you need to know about that. Oddly enough the last movie Box Office Mojo classified in this category was in 2013, which is a tad bit odd. Also listed for recent BMT film Cheaper By the Dozen 2 (which makes no sense, he has twelve children, how is he a fish out of water?). Anywho, this managed to get released literally in the nadir of a genre, impressive.)

Rotten Tomatoes – 5% (5/108): Its cast tries hard, but Old Dogs is a predictable, nearly witless attempt at physical comedy and moral uplift that misses the mark on both counts.

(5% is obviously extraordinarily low. Thinking about it and seeing the trailer I can certainly believe that the cast works hard. The screenwriters and director on the other hand …)

(I hate this poster. It is boring. It has no color or life to it. It suggests nothing about the film. Why not call it Old Dads? Honestly? Why ever suggest this movie is about dogs at all? They even put the dog front and center in the poster. I just don’t get it. I would love for someone to explain the logic, because I don’t get it.)

(Besides being cheesy this is quite an excellent tagline. Plays into the title obviously, but also suggests a bit about the plot (him having to be a dad unexpectedly). I honestly wonder if the tagline itself inspired the title, because I can’t really think on why it is called Old Dogs … because there is an old dog in it … was the old dog a metaphor for something? I’m blowing my own mind over here, but I’ll save you the bother and not mention it)

(Oh yeah, my favorite keyword obviously. We’ve seen most of the amazing ones I think. Like the Spirit I think only has it because of clones (or something). The Seeker and I Know Who Killed Me are BMT classics though.)

Notes – The film’s release date was postponed three times. First, due to Bernie Mac’s untimely death. The second time was for the death of John Travolta and Kelly Preston’s son, Jett Travolta. The final time was because Robin Williams had a health scare that required surgery. All of the postponement ultimately caused the movie to be released more than a year after the original, intended release date, finally releasing on November 25, 2009. (Yes, this was something I vaguely knew before watching the film as well. It is funny to think that us “previewing” films did kind of start before the emails and recaps did, just because this movie in particular has an interesting backstory to it).

Bernie Mac’s last released film. Soul Men (2008) was released first, but was the last film he made.

The film was originally 107 minutes long and adult-oriented with an R-rating being disturbed through Disney’s company Touchstone Pictures. After the test screening went poorly, Disney decided to distribute the film through Walt Disney Pictures and aim it toward children, cutting the film by 19 minutes and removing all adult jokes out so that it would be more acceptable for children. (Yes, this is also a rumor I had heard after watching the film. It does feel that way, although it makes you wonder how they did that when the focus of the film always had to be 60-year-old first time fathers. There was also rumors that the Japan storyline for Seth Green was at one point much larger and more detailed, although seeing as it was filmed in Connecticut that seems a little more unlikely).

The film is dedicated to both Bernie Mac and Jett Travolta, John Travolta and Kelly Preston’s eldest son who died unexpectedly earlier in 2009.

Although Kelly Preston is married to John Travolta, in this film she is paired with Robin Williams.

Majority of production, including most of Tokyo scenes (except for the Tokyo airport and Tokyo street scenes that were shot in New York City) were done in Connecticut, thanks to the 30% Film/TV production tax incentive that the State offered at that time. There was no overseas location shoot in this film. (See. I find it unlikely that they could have pulled off an “expanded” Japan storyline without actually filming in Japan for at least some exteriors)

One of the retouched pictures of Travolta and Williams, is actually from the shooting of Carrie (1976). Nancy Allen was replaced by Williams inside the car.

Nominated for the Razzie Award for Worst Director (Walt Becker)