Very disappointing week in the world of BMT. I fully expected to be announcing the first BMT Live! of the year as xXx: The Return of Xander Cage was released. Alas. Somehow it was able to garner 42% on RT due to a plethora of “Good for what it is” type reviews. Fuck that. Sigh. Instead we’ll wait on some other obvious choices later this month and move right onto the Girls Night Out. Only two real options for the category: Sex and the City 2 or Miss Congeniality 2: Armed and Fabulous. Patrick hasn’t gotten through the entire series of Sex and the City in prep for the film (unfortunately that is not a joke) so we are going for Miss Congeniality 2: Armed and Fabulous. I’m actually excited about that. Great title. Let’s go! 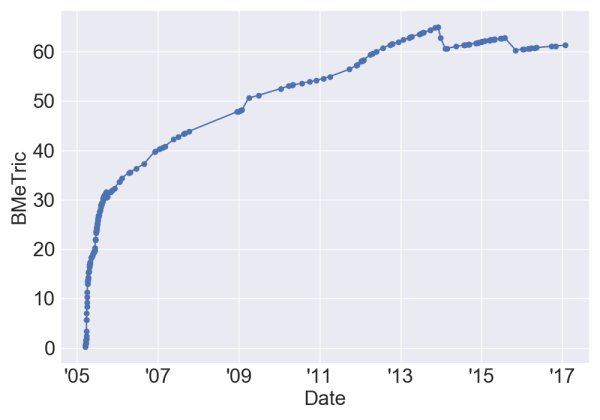 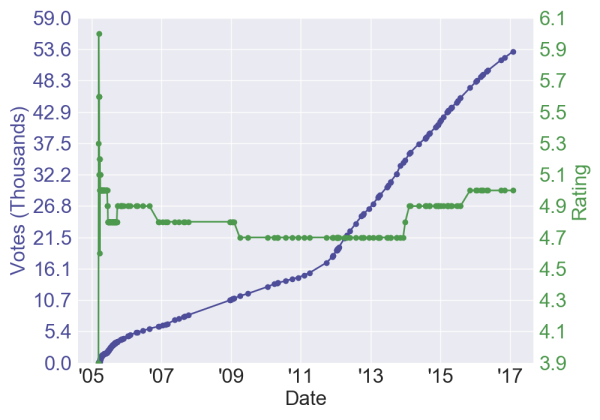 (This is the greatest 2011 inflection ever. I think it is because you literally see it go from 0 votes to 53,000 (the first data point has 71 votes!). That is why the rating fluctuates so much in the beginning too, it was just shit on by those 71 people, and then it jumped immediately to 6.0 (early fans of the original), and then is faded to where it belonged. This is a very “sustained excellence” plot, which I think means this is going to be a classic. Nary a regression to the mean to be seen and high 4 / low 5 is genuinely terrible for IMDb. Getting excited.)

Leonard Maltin – 1.5 stars –  Bullock returns as FBI agent Gracie Hart, for public relations purposes, becomes the “face of the FBI.” When Burns and Shatner are kidnapped, the bureau’s beauty and her bodyguard (King) abandon PR duties and try to find the hostages. Forced (and redundant) sequel has only a couple of bright moments and never hits a comedic stride. Several celebrities have bit parts.

(You finished writing your novel yet, Leonard? That last statement is real vague. Just some celebrities popping in… to let you know.)

(Jesus Christ. So let’s go through a few things. (1) Benjamin Bratt is removed from the sequel with an off screen phone call. (2) Cameo by at least Regis. (3) The audacity to claim that all of a sudden Bullock’s character is some undercover wonder. (4) Set in Las Vegas. Roll all that up together with that fact that literally everything good from the original (Bratt and Caine at least a little bit) just are no longer there and this is a recipe for disaster. I’m excited.)

Writers – Marc Lawrence (characters & written by) – (Known For: Miss Congeniality; Music and Lyrics; Two Weeks Notice; The Rewrite; Forces of Nature; BMT: Did You Hear About the Morgans?; Miss Congeniality 2: Armed and Fabulous; The Out-of-Towners; Life with Mikey; Notes: And this guy’s like the personal writer for Sandra Bullock and Hugh Grant. He wrote 4 Bullock films and 4 Hugh Grant films, including one (Two Weeks Notice) where they both appear. Weird. Nominated for an Emmy for producing Family Ties.)

Caryn Lucas (characters) – (Known For: Miss Congeniality; BMT: Miss Congeniality 2: Armed and Fabulous; Notes: Wrote with Lawrence on a short lived sitcom Pride & Joy. Jesus, this guy must be the king of the Rolodex. Pulling out his contacts to make all these films and shows.)

(That … actually doesn’t seem that bad. But dropping from a $100 million dollar comedy to about half of what it raked in a few years earlier obviously meant the end to the franchise. And the end to Bullock’s romantic comedy career for a bit. She would come back with the one-two punch of the very successful The Proposal in the same year as the widely panned (BMT) All About Steve.)

#35 for the Action Heroine genre 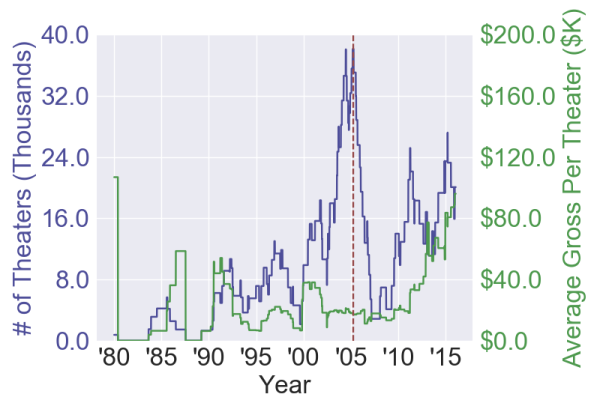 (Near future BMT Resident Evil Extinction, which makes sense. We last saw this during the Hall of Fame preview for Street Fighter Legend of Chun Li. This film did substantially better and really came right before the genre collapsed. Since then it has clawed its way back very successfully. This plot doesn’t count Rogue One so it’ll continue to grow as well.)

#14 for the Cinderella Complex genre 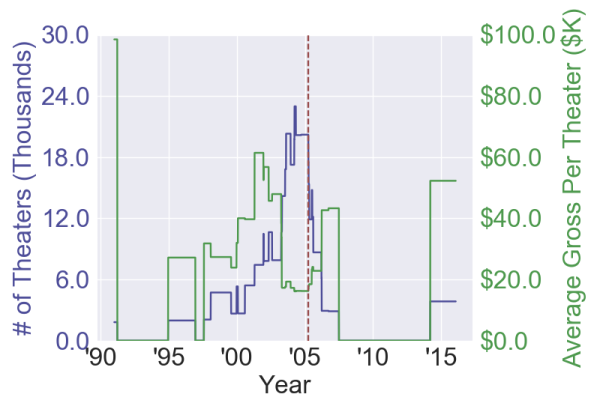 (Ooooo right near BMT favorite The Prince and Me. Such an odd genre. And I’m sensing a trend, this also collapsed right around 2005. I think 2005 was a point in time: a point when the studios realized if they were just a tiny bit more careful they could just print money. So they relegated this to straight-to-DVD Disney affairs (I assume).) 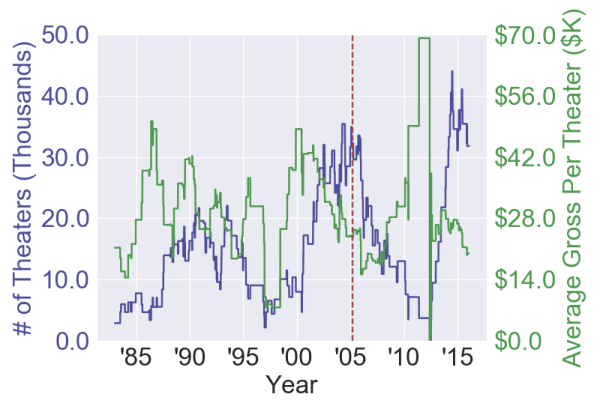 (So … We finally discovered the root of the sequel collapse. Hollywood wasn’t replenishing their comedy coffers, they literally just couldn’t function for a bit between 2005 and 2010. That year basically marks a collapse across the board in certain “bad movie genres” as they hibernated and started to mull on the next big hit. 2008 was Iron Man, so they didn’t have to wait too long. But Miss Congeniality 2 Armed and Fabulous seems like something special. It sat on the edge of the abyss and dared people to look at it, see what our hubris wrought as critics whispered “The horror! The horror!”.)

Rotten Tomatoes – 15% (22/145): Sandra Bullock is still as appealing as ever; too bad the movie is not pageant material. 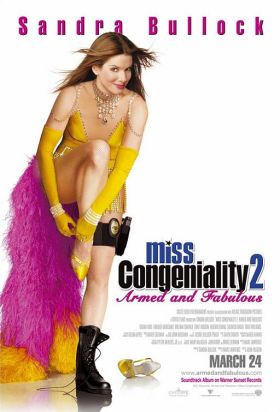 (Violates everything I hold dear: too much white, weird framing, no dominant coloring, and (worst of all) no tagline! Only thing it does OK is have a fairly unique font. Would be hard to spoof.)

(I need to collect together all the films that don’t have a tagline on their poster and start a letter writing campaign to shame the producers. Unacceptable behaviour and we don’t have to stand for it. Theory: Some producer thought the tagline Armed and Fabulous was so good that it needed to be a subtitle.)

(Phew, I thought Bullock was going to go for a two-fer with Miss Congeniality 2 sneaking in at the end. Catwoman is incredible, and honestly this is a really fun list. Imagine watching those ten movies in a row! I’m in, let’s do it.)

In Miss Congeniality (2000), there was supposed to be a storyline where Gracie Hart’s mother was killed in the line of duty. The storyline was included in this sequel.

A Miss Congeniality (2000) poster can be seen in the background at the Las Vegas airport during the scene where Gracie is supposed to be flying back to New York. (wot?)

An entirely different sequence was filmed wherein the limo driver was portrayed by Jeffrey Tambor. (That fact is fun!)