There were a number of pure science fiction films available for StreetCreditReport.com, but we were feeling a little genre mash’em-up. Let’s get something that’s a little dash of horror, a little pinch of intense family drama, a smidgen of science fiction, and literally no comedy whatsoever. That’s right! We’re watching Godsend. Not sure how many people remember this Robert De Niro/Greg Kinnear film that scored a startling 4% on RT. It’s about a family who loses their only son in a tragic accident. Offered the chance to clone their child they take the chance (against their own better judgement). All is well until strange things start happening once the child passes the age at which he died. Uh oh! Sounds extremely sad, incredibly close, and marginally creepy. Just how I like it! Let’s go! 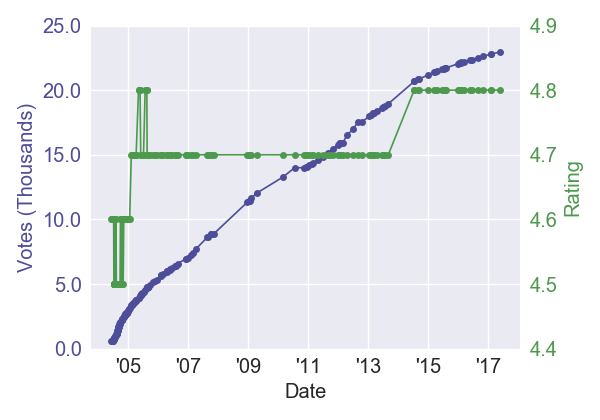 (Those are some dense plots for reals. Extremely promising. Basically no regression to the mean and a significantly low rating for IMDb being sub-5.0. Kind of amazing that a film released in 2004 can “only” have around 20 thousand votes over 13 years later, but even so, it seems like people have been slowly watching the film over the years and thinking “wow, this apparently terrible film is in actuality terrible” which is a good sign.)

Leonard Maltin – 2.5 stars – A couple grieving over the loss of their 8-year-old son is approached by a medical researcher who promises that he can enable the woman to give birth to the identical child all over again – using a revolutionary (is illegal) cloning method he’s perfected. Good performances and an interesting premise reel us in, but then the filmmakers string us along, teasing us about where the story is headed. It doesn’t pay off. Filmed in Canada, which never looked more unlike the U.S.

(Sweet settings burn by Leonard, decent hyphen game, and an overuse of the word “us” (speak for yourself Leonard). I kind of love this review, even if it does put a damper on my hopes for the film. Leonard doesn’t like the spooky-scary though, so 50-50 whether he actually watched this film. I could easily guess that the highlight of the film is the acting and premise based solely on the trailer.)

(I remember this trailer. And I remember thinking it looked spookily interesting. And I remember being shocked when it was apparently terrible. Loving the kick ass black Wilson b-ball in the beginning, and hating the little title cards “His Mother’s Eyes” etc. Cheesy, but getting me amped.)

Writers – Mark Bomback (written by) – (Known For: The Wolverine; Dawn of the Planet of the Apes; Die Hard 4.0; Unstoppable; Race to Witch Mountain; Future BMT: Deception; Total Recall; Insurgent; BMT: Godsend; Notes: There is an entire interview just about this movie and the thought process that went into it. Fascinating stuff. Seems like a writing-for-fun-and-profit kind of guy, and strangely seems to have ended up doing a ton of action films.)

Greg Kinnear – (Known For: Little Miss Sunshine; Brigsby Bear; As Good as It Gets; We Were Soldiers; Invincible; Anchorman 2: The Legend Continues; Sabrina; Stuck in Love; You’ve Got Mail; Robots; Mystery Men; The Gift; Baby Mama; Green Zone; Animal Attraction; Stuck on You; Little Men; Heaven Is for Real; Ghost Town; Bad News Bears; Future BMT: I Don’t Know How She Does It; Loser; Blankman; The Last Song; Salvation Boulevard; Dear God; A Smile Like Yours; Unknown; Murder of a Cat; Feast of Love; BMT: Movie 43; Godsend; Notes: If I was older I probably would have realized that he used to be a talk show host before making his film debut in Blankman (!). Nominated for an Oscar for As Good as It Gets.)

Rebecca Romijn – (Known For: X-Men; X: First Class; X-Men: The Last Stand; X-Men 2; Austin Powers: The Spy Who Shagged Me; Femme Fatale; S1m0ne; Run Ronnie Run; The Alibi; Future BMT: Good Deeds; Man About Town; The Punisher; Dirty Work; BMT: Rollerball; Godsend; Razzie Notes: Nominated for Worst Supporting Actress for Rollerball in 2003; Notes: Formerly Romijn-Stamos, and now married to Jerry O’Connell with whom she has twin daughters. Love me some twin notes. She was a model, and has an impressive filmography after breaking out in X-Men.)

(That’s a bomb. But at least the budget was modest. It could have easily been worse considering the actors involved, which is definitely why it costs $25 million instead of $10 million.)

(I don’t like cheap shocks, they are the worst way to make a horror film. I loooooove ludicrous dialogue though, so I’m down. Make me jump in exchange for De Niro saying something like “he’s got his brother’s memories!”. I take that deal 10 out of 10 times.) 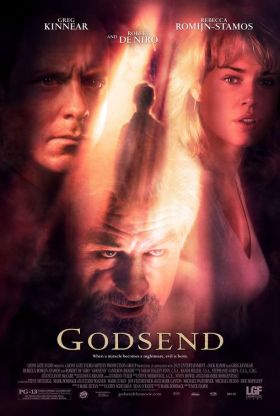 (Why is there smoke all over this poster? I can barely tell what’s actually on it. But still a nice example of how to make a poster with people in it without ruining the color. Solid orange color, terrible font, and really bad spacing. Meeeehhhhhhh.)

When a miracle becomes a nightmare, evil is born. (B-)

(The first tagline is not on the poster, but I like that at some point they made very specific decision on exactly when the entire movie took place. If worse comes to worse I can use it for the temporal setting. So thanks, anonymous tagline writer. The second one is elusive. I certainly sounds like a tagline. But does it really mean anything? I don’t think so and graded it accordingly.)

(Ha! Junior is by far the best one there. Someday we are going to watch and regret watching 3 Ninjas: High Noon at Mega Mountain starring the Hulkster.)

Notes – Robert De Niro had originally planned on merely providing a brief cameo for the film – however after director Nick Hamm heard De Niro would be interested in his project, he asked De Niro to participate in a few more scenes that were all filmed within a week. De Niro later regretted this because his name was “splashed over all the advertisements”. (De Niro regretted that his money grab became a high profile money grab)

Before the release of this movie, Lions Gate Films set up two official websites: one conventional site with movie information, and one site that appeared to be a promotional tool for the (fictional) cloning institute depicted in the movie. The website gave an email address and phone number (1-888-699-2672) for the “Godsend Institute;” calling the number resulted in a recorded message giving the institute’s office hours. Several news outlets reported that when a few bereaved parents called or emailed the fake institute to inquire about having their children genetically reconstituted, the studio started responding to them and explaining that it was just a movie tie-in and not a real laboratory. Similar advertisements for fictional medical procedures and clinics were also produced as parts of the advertising campaigns for Gattaca (1997) and Eternal Sunshine of the Spotless Mind (2004). (That isn’t great to be honest. That sounds terrible)

Five different endings were shot for this movie and the released one is the tamest one. (This is worthless unless I can see the other endings, I don’t even know what tamest means in this context)

The operating room sequences were filmed inside the empty swimming pool of the institute complex. (fun facts)

The snow scene in the graveyard was unplanned. It was hoped the snow would remain until the scene was completed, and it did. (fun facts)