Clearly when we double our work for a week by watching a double bill there is only one thing that we can do. That’s right! Watch another double bill for the horror entry in the Calendar cycle. My Gawwwwwd! Is that… I Know What You Did Last Summer/I Still Know What You Did Last Summer’s music? I’ve been really looking forward to watching this series for BMT. Not only is the title ridiculous, but it’s based on a book (!) and features one of the underrated stars of BMT, Freddie Prinze Jr. It landed on the Calendar for November 13th beating out the likes of 2012, I’ll Be Home for Christmas, and Love the Coopers. Let’s go!

(Maybe it is because we’ve been doing just brutal films, but I am fascinated by this plot. It is almost entirely a function of it having so many reviews while still being slightly below average (average is roughly 6.0), and the way it just floats around the same value … it is kind of the definition of regression to the mean. It has managed to just follow a contour line on the rating-vote plot perfectly. Very nice. Very popular – below average film.)

Leonard Maltin – 2 stars –  In coastal North Carolina, four friends accidentally run down a pedestrian on a lonely road. They dump the body in the sea and vow never to mention it again. But a year later, they each begin receiving the title message in the mail, and then the murders begin. … Scripter Kevin Williamson’s attempt at a Scream follow-up is too routine to succeed overall.

(Pretty low key review, but somewhat expected given this isn’t really supposed to be a truly terrible film. I’m actually pretty shocked that it is below 40% in the first place, but it is kind of barely there, and horror fans and critics alike are fickle when it comes trashing slasher films. Add in that late-90s horror outside of Scream was basically a garbage pit and maybe this will be relatively okay?)

(It seems real, but it is a bit unbelievable. The change of tone at the end gives off a thick Scream vibe, which is probably a smart move since Scream is basically the only big budget slasher film to be received well post 1990. I personally think this is going to be fun, but closer to Scream 3 than anything else. Like it knows what it should probably do to make the post-1990 slasher work, but never quites gets where it needs to get … vague, but I know what I mean.)

Directors – Jim Gillespie – (Future BMT: Venom; D-Tox; BMT: I Know What You Did Last Summer; Notes: Scottish. It is hard to say this film ruined his career as it was unclear if it was really on the upswing to begin with, but D-Tox, which was a big budget straight-to-DVD disaster. Anyways, it appears he might work for London Film School now.)

Writers – Lois Duncan (novel) – (Known For: Hotel for Dogs; BMT:  I Still Know What You Did Last Summer; I Know What You Did Last Summer; Notes: Note that in addition to writing the book Hotel for Dogs (which I didn’t know was adapted from a book …), she also wrote Killing Mr. Griffin which has an eerily similar plot, so much so it is mentioned on the books wiki page. And double weird, Kevin Williamson wrote Teaching Mrs. Tingle! Anyways, in sadder news she died last year.)

Kevin Williamson (screenplay) – (Known For: Scream; Scream 4; Scream 2; The Faculty; Future BMT: Cursed; Scream 3; Teaching Mrs. Tingle; BMT: I Know What You Did Last Summer; Notes: He has a very interesting career, clearly very much focused in the horror genre. He was raised in North Carolina where this film is set, and ended up producing Dawson’s Creek. Horror films and Dawson’s Creek, who would have thunk it.)

Actors – Jennifer Love Hewitt – (Known For: Tropic Thunder; Can’t Hardly Wait; Heartbreakers; Future BMT: Garfield; Garfield 2; Sister Act 2: Back in the Habit; Delgo; The Suburbans; House Arrest; The Truth About Love; Jewtopia; Telling You; BMT:  I Still Know What You Did Last Summer; The Tuxedo; I Know What You Did Last Summer; Notes: Probably more famous for her later television work (The Client List and Ghost Whisperer in particular) at this point, she was a megastar when I was growing up due to Party of Five. In between … well she made bad movies basically. She is a huge fan of Glasgow Celtic Football Club apparently.)

Sarah Michelle Gellar – (Known For: Cruel Intentions; Scream 2; Small Soldiers; Funny Farm; Suburban Girl; Future BMT: Scooby-Doo; The Grudge 2; Scooby-Doo 2: Monsters Unleashed; Happily N’Ever After; The Return; Southland Tales; Simply Irresistible; She’s All That; The Grudge; Harvard Man; TMNT; BMT: I Know What You Did Last Summer; Notes: Is most famous as Buffy, and has basically been doing television work for the most part. I married to Freddy Prinze Jr., who also stars in this film.)

Anne Heche – (Known For: Donnie Brasco; The Other Guys; My Friend Dahmer; Catfight; Volcano; Wag the Dog; Rampart; Cedar Rapids; The Adventures of Huck Finn; Return to Paradise; A Simple Twist of Fate; Walking and Talking; Wild Side; I’ll Do Anything; The Third Miracle; Auggie Rose; Future BMT: Psycho; Nothing Left to Fear; Wild Card; Six Days Seven Nights; The Juror; Milk Money; Spread; Birth; Arthur and Mike; That’s What She Said; What Love Is; BMT: I Know What You Did Last Summer; Razzie Notes: Nominated for Worst Actress for Psycho in 1999; Notes: Growing up I mainly knew of her because she was Ellen DeGeneres’ partner for a few years. Recently she was on the podcast Doug Loves Movies where she thoroughly embarrassed herself and was kicked off.)

(Really solid haul for a slasher film. Basically right there with Scream, and is basically exactly what they were going for. This was when people thought slashers were back! They weren’t.)

#6 for the Horror – Slasher genre

(While the slasher genre made a triumphant comeback with Scream, it was not to last. The 2000s saw a bunch of remakes of 80s classics (like our beloved Friday the 13th) and then the genre basically disappeared. That isn’t to say there haven’t been any. Most Likely to Die is an example of what appears to be a fairly big slasher released basically exclusively to VOD in 2015. So it is likely that is where the genre is at the moment.)

(I get to make one: Fun, energetic, uninspired, predictable, fairly scary … but not that scary. I Know What You Did Last Summer goes through the beats of a Scream knockoff, but never quite reaches the satisfying tongue-in-cheek peak of its obvious predecessor. That is basically the gist of it. A fairly scary, fairly satisfying Scream knock-off.)

Poster – I Know What You Sklogged Last Summer (A-) 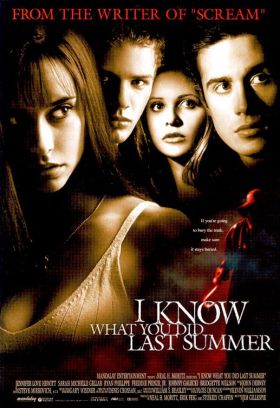 (Have to admit, this is nicely done. This is exactly how prominent pictures of stars should be employed on a poster. Just wish the color they used was better. I like the dash of red, the slightly modified font, and the spacing.)

Tagline(s) – If you’re going to bury the truth, make sure it stays buried. (C+)

(Well that’s a mouthful. Using the word bury twice sounds odd. This seems like a second draft of a tagline that they couldn’t quite make all the way to the end. Does give a hint at the plot and isn’t totally bereft of cleverness.)

(Ba-da-da-da-da I’m lovin’ it. Overalls!? We talking about overalls!? I want to hold a bad movie marathon announced as “IMDb keyword: Overalls”. Some of those are legit hilarious, although I would cut Dhoom 3 obviously.)

Notes – Lois Duncan has stated openly that she hates the movie, because the filmmakers turned her book into a slasher film. She especially detested it in the wake of her 18-year-old daughter’s murder in 1989. (Makes sense, I’ve read the book NBD, and it is nothing like this. Certainly not a slasher film)

Despite being part of the main cast and appearing in many key scenes together, the characters Helen (Sarah Michelle Gellar) and Ray (Freddie Prinze Jr.) only speak to each other twice (Ray – “How do you know that?” Helen – “Missy, said there was a friend named Billy Blue)” (at around 1h 2 mins) and (Ray – “No, it’s not, it’s true” Helen “Yeah, I don’t think so, Ray”) (at around 10 mins). In real life, the two later fall in love and marry. (That is absurd)

Kevin Williamson wrote this script before Scream (1996), but was unable to sell it. Following the big screen success of his next screenplay, “Scream,” Columbia Pictures immediately bought I Know What You Did Last Summer (1997) (Ha! Purely fueled by Scream. Calling this a knock-off is a little unfair I admit, since they share the same main screenwriter.)

The ice inside the storage of the boat was actually made of gelatin so Jennifer Love Hewitt could comfortably move around inside. (fun fact)

The group goes to “Dawson’s Beach.” This is a reference to Dawson’s Creek (1998), also written by Kevin Williamson. (Doubt it, seems like it would have to be the other way around given the years involved)

The original trailer for the movie described Kevin Williamson and the movie as “from the creator of Scream (1996)”. Miramax, owners of the “Scream” franchise successfully sued Columbia Pictures for “false advertising” and the phrase was removed. (It was from the writer of Scream … amazing they could do that)

After the first Croaker County Beauty Pageant, the band playing at the beach party is the alternative/surf rock band Southern Culture on the Skids. (Very interesting. Might have to go into our Who section of the recap)

(at around 38 mins) “Hush” from the soundtrack (played fully over the end credits) is heard briefly on the radio of Barry’s car. (Gross)