Big week highlighting one of the few changes the BMT Board of Directors (BMTBD) proposed for the year. That was to try to bring in some of the many major bad movies that we had watched prior to BMT and as a result never gave the full BMT treatment. Originally such films were totally excluded from consideration. No more! So for the SciFi/Fantasy/Other category of the adaptation cycle we went straight for the crown jewel. That’s right! We’re bringing the single highest scoring BMeTric film of all time, the critically reviled superhero film Batman & Robin. We obviously watched this as kids and probably didn’t even think it was all that bad (we were like 11, so I’m not sure I had ever watched a film and thought it was bad). Let’s see if it holds up (holds down?) on a rewatch. But first we have some homework to do! That’s right, Batman Forever qualifies (RT 39%) so it will be included as a bonus here. Let’s go! 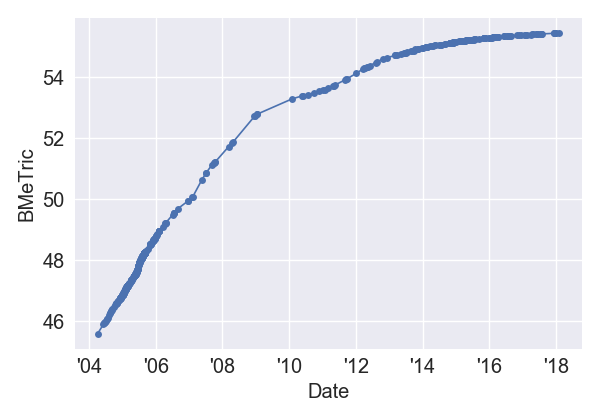 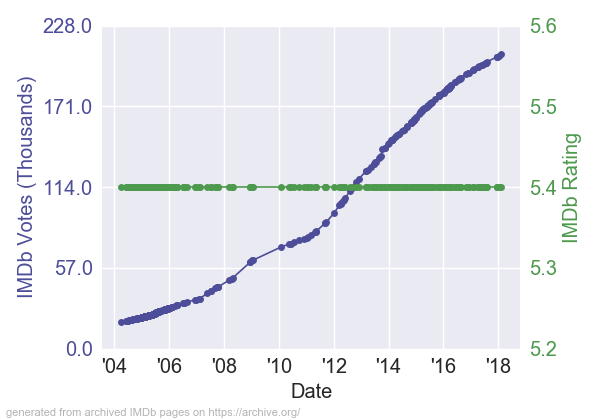 (Sacre Bleu! That … it is so beautiful. It is the most steady unwavering below average IMDb ratings I’ve ever seen. It is pristine. Shhhhh, don’t scare it away, just appreciate that you get to appreciate it.)

Leonard Maltin – 3 stars –  Kilmer makes the role of Batman/Bruce Wayne his own in this well-written sequel in which the Caped Crusader battles Two-Face (Jones) and The Riddler (Carrey) while attempting – at least for a while – to resist the advances of a sexy psychologist (Kidman). He also acquires a partner in O’Donnell (as Robin), and it’s this aspect of the film – the character relationships – that give it solidity. The loud, razzle-dazzle special effects are overkill. Ed Begley, Jr., appears unbilled.

(Wow, that is a pretty solid review. Better than most that’s for sure. I’m not sure “well-written” is how I would describe the film from what I recall, but this does get me a bit more excited about the whole affair.)

(Besides how over-the-top both of the villains looks that trailer is actually quite good. It even makes the whole Robin introduction make a bit more sense: Batman is fighting two villains and thus needs a partner … makes sense to me.)

Actors – Val Kilmer – (Known For: Heat; Top Gun; True Romance; Song to Song; Tombstone; Willow; Kiss Kiss Bang Bang; Deja Vu; The Prince of Egypt; The Doors; Top Secret!; Real Genius; Palo Alto; Felon; Kill the Irishman; MacGruber; Bad Lieutenant; The Missing; The Ghost and the Darkness; Pollock; Future BMT: The Island of Dr. Moreau; The Snowman; Twixt; Alexander; The Traveler; Red Planet; Planes; 5 Days of War; Hard Ca$h; Delgo; The Real McCoy; At First Sight; Masked and Anonymous; The Saint; Mindhunters; Wonderland; 10th & Wolf; Stateside; Summer Love; BMT: The Love Guru; Batman Forever; Notes: His health reports are quite strange. It seems like he had throat cancer which is why he didn’t do any films for two years. He was back this year with The Snowman … but tabloids are still pushing stories about his cancer spreading to his brain and being terminal? Just super weird stuff. He at one point denied having cancer and then said “I’ve had a healing of cancer” … what?)

Jim Carrey – (Known For: The Truman Show; Eternal Sunshine of the Spotless Mind; The Bad Batch; Dumb and Dumber; Ace Ventura: Pet Detective; A Series of Unfortunate Events; The Mask; Bruce Almighty; Man on the Moon; How the Grinch Stole Christmas; Liar Liar; Yes Man; Me, Myself & Irene; Earth Girls Are Easy; Anchorman 2: The Legend Continues; The Cable Guy; I Love You Phillip Morris; A Christmas Carol; Peggy Sue Got Married; Horton Hears a Who!; Future BMT: Dumb and Dumber To; Pink Cadillac; Once Bitten; The Incredible Burt Wonderstone; Fun with Dick and Jane; Ace Ventura: When Nature Calls; Kick-Ass 2; BMT: Batman Forever; The Number 23; Notes: One of the many breakout stars of the television show In Living Color and went on to be one of the most famous comedic actors in the world. Despite winning two Golden Globes he has never even been nominated for an Oscar. Also noted crazy person.)

(Basically nothing by today’s standards. Kind of amazing, but the first Burton one was the highest grossing of the three. Forever actually did better than Returns.)

#39 for the Comic Book Adaptation genre

(Basically Superman and Batman kicked off a chain of comic book films that peaked in 1995 and then collapsed. Spiderman rejuvenated the genre which is now averaging 64 thousand theaters a year … considering you kind of max out at 4K theaters, or roughly 16 comic book movies in a calendar year at one point. Steel and Barb Wire are kind of the lowest of the lows for the genre)

#38 for the Superhero genre

(This actually went from 40% flat to just a shade below this year! Rotten Tomatoes scores change unfortunately. The extra review was a short review from CNN in 1995, it just hadn’t been recovered yet. We had to jump at the chance to do the film though, one more good review and it won’t qualify.) 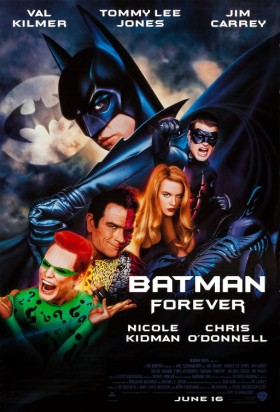 (I wish they had done more to tone down the colors brought in by the different characters so that there was a little consistency, but otherwise this is a well laid out poster that gives us everything we need to see without going overboard. Font is even given a unique spin. I like it.)

(Apparently this is from the trailer and ended with “Batman Forever.” Which may or may not be obvious. It’s a good cadence and sounds like a tagline, but dips a little into the generic zone. Also I like my taglines on the poser. Just a preference.)

(Interesting. We need to watch Vampire in Brooklyn for sure, tick off another Murphy film. This is somewhat of an enigmatic one though, basically all cop / batman films … so what does partner in Jungle 2 Jungle mean?)

Notes – According to Jim Carrey, he did not get along with Tommy Lee Jones, who told him that he hated him and his films. (Sounds about right)

Jim Carrey’s original idea – to shave a question mark into his scalp – had to be scratched as he was due in court to finalize his divorce. (Jeez, that is a dark reason)

While Tim Burton was still slated to direct the film, Micky Dolenz was considered to play The Riddler. After Burton dropped out, Robin Williams was offered the role by Warner Brothers, but refused due to being bitter about being used as “bait” to lure Jack Nicholson to commit to play the Joker in Batman (1989).

Michelle Pfeiffer was considered to reprise her role as Catwoman.

In the first Batman (1989), District Attorney Harvey Dent was played by Billy Dee Williams. Williams accepted the role with the knowledge and expectation that Dent would eventually become Two-Face. He reportedly had a clause put into his contract, reserving the role for him in any sequels, which Warner Bros. had to buy out, so they could cast Tommy Lee Jones. Williams would eventually voice the character in The Lego Batman Movie (2017). (Huh, I guess I understand wanting a bigger name in there, but that would have been pretty fun maybe)

Dick Grayson suggests “Nightwing” for a hero name. This was the name used by the adult Dick Grayson in the comic books.

Before deciding not to don the cape and cowl for a third time, Michael Keaton met with Joel Schumacher and declined to join the project after deciding that he did not like the direction in which Schumacher was looking to take the franchise. In the brief time that Tim Burton was still considering doing a third Batman film, Riddler was the only villain that he planned on using. The idea of using Two-Face did not come up until Schumacher joined the project.

While learning to twirl a cane, Jim Carrey reportedly broke around a dozen prop canes and some of his trailer furniture.

The Batmobile was usually driven by stunt drivers, but Chris O’Donnell insisted on driving it himself in the joyride scene. He crashed it into a curb, and dented a fender. (nice)

Val Kilmer and Joel Schumacher clashed during filming. Schumacher described Kilmer as “childish and impossible”. According to Schumacher, Kilmer refused to talk to him for two weeks.

Val Kilmer and Jim Carrey became good friends during filming. They bonded over the deaths of their fathers.

Tommy Lee Jones was Joel Schumacher’s first choice for the role of Two-Face after working with him in The Client (1994). Jones accepted the role because his son Austin, eleven at the time, said Two-Face was his favorite character.

Joel Schumacher’s decision to put nipples and enlarged codpieces on the Bat-costumes, as well as an earring on Robin caused controversy – it even bothered Batman creator Bob Kane. Schumacher said he wanted the costumes to have an anatomic look, while the earring was supposed to make Robin more hip. He also claimed that the basis for the Batman and Robin suits came from statues of the gods of ancient Greece. (Joel Schumacher everyone!)

Robin’s costume is not the classic costume of the comics that Dick Grayson wore, but it is based on the costume worn by the third Robin, Tim Drake. This costume was introduced in 1990, and it is rumored that Tim Burton had a hand in designing it.

So heavy was his Batsuit, that Val Kilmer lost five pounds filming the opening fight scene alone. (NOPE, that fact is fake. FAKE)

Tim Burton said “I always hated those titles like Batman Forever. That sounds like a tattoo that somebody would get when they’re on drugs or something. Or something some kid would write in the yearbook to somebody else. I have high problems with some of those titles.” It is rumored that Burton was considering the title Batman Continues while he was still slated to direct.

For the scene where Chase Meridian is visited by Batman on her balcony at night, Nicole Kidman was not wearing any clothing underneath the white silk sheet, with which she was covering herself. (But why?)

Joel Schumacher said in an interview about Val Kilmer “Val did me two great favors when I wanted him to be Batman, he said yes. Then he created a situation which allowed me not to have him play Batman again, they were both happy, happy instances for which I will always be grateful”. (Cooooooold bloooooooded)

Unlike the two Tim Burton Batman films, this is not scored by Danny Elfman. Also, unlike those two, this film features original songs performed by multiple artists. The trailers for this film and Batman & Robin (1997) feature Elfman’s score from Batman (1989) and Batman Returns (1992), however. (Oh I didn’t know that)

The handgun Two-Face uses throughout the movie is a chrome plated Benelli mp95e. (gun facts, a staple of any good IMDb trivia section)

Awards – Nominated for the Oscar for Best Cinematography (Stephen Goldblatt)

Nominated for the Razzie Award for Worst Original Song (Bono)