Cradling the child in his arms, Jamie brings her out of the cave and into his life. Having spent most of her childhood in the care of a giant robotic spider she has a lot to learn, but you know what? So do they. It’s a classic Old Dogs situation up in here as Jamie and crazy Uncle Patrick teach her how to swim and bike and laugh all the while getting into zany situations. They eventually put their party animal ways behind them and take accounting jobs at their father’s firm. It may not be the most glamorous job, but it’s a stable living and the benefits are good. As they wave goodbye to her on her first day of school, a single tear falls from their eyes. The Ivory Socket and Obsidian Dongle begin to glow a deep amber, “The final MacGuffin… it was within us the whole time. It was… love.” Knowing that it’s finally time, they place the pieces together. In a flash of light the universe is torn apart…

Blinking his eyes, Jamie awakens to find the little old librarian staring down into his face. “Hee hee hee, we did it. It is destroyed and the Socket is mine. No longer will the power of the Dongle stand in my way.” It was a set up from the jump! Jamie wails in anguish and begins to cough up blood due to his many mortal wounds. “No,” the librarian screeches, “you must live and help me use the Socket. I must have your twin powers.” He can feel her dragging him through the darkness until they come upon a large house in the woods. A man opens the door. “Another one, Lucretia? If I must.” He smiles, revealing large fangs. That’s right! We’re watching Vampire Academy!

Blinking his eyes, Patrick awakens unharmed on what is clearly a terribly built house set on a soundstage, a teenager in a shoddy witch costume sits across from him in the sparsely dressed living room. “I’ll get you my pretty,” she plagiarizes shoddily, “but not before I show you my dance grooves!” As she bips and bops around Patrick becomes confused. The display was terrible, what was the point? “Top this, top that, top that, top that, top that …” the witch’s song reverberates inside his skull. Where is he? What is happening? Top what? … Top “that” of course. Slowly and impassionately the witch is joined by other similarly dressed characters, and Patrick’s mind begins to slip away. Patrick wonders how he could have thought the dance was bad, it was wondrous. It was … everything. A slow small smile forms on the witch’s face. “Top that,” she whispers … That’s right! We’re also watching Teen Witch!

That’s right! We’re transitioning to our next cycle of the year where we are bringing along some z-movie friends to pair with our normal BMT selections. So we got a little teen angst mixed with the supernatural for the much anticipated cult classic Teen Witch and the much less anticipated box office flop Vampire Academy. This will be mirrored by Patrick being sent to the z-universe through the power of the Dongle and, ooooooh boy, we’re pretty excited about it. Let’s go! 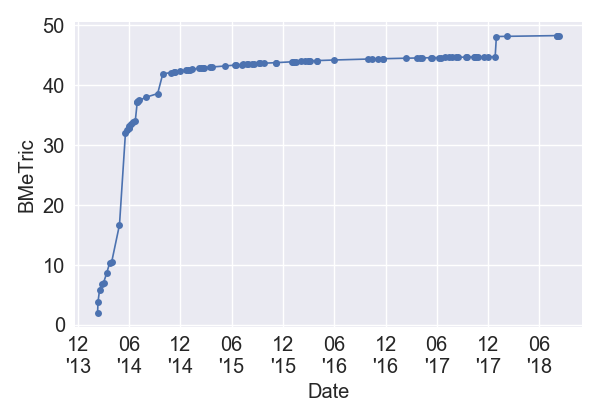 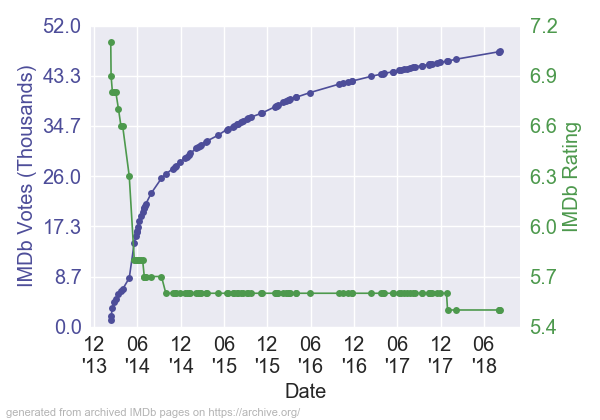 Leonard Maltin – 3 stars –  Vampire princess and her best friend / protector return to their prep school in the Rockies. Soon, it’s clear that someone or a group is trying to kill them – but who? And why? Unexpectedly witty, entertaining comedy-drama is well acted and explains its complicated mythology clearly, more or less. Main problem for the viewer is sorting out the hunky boyfriends. Deutch is particularly good as the wisecracking, spunky heroine. Screenplay by Daniel Waters of Heathers fame, brother of the director; based on the YA novel by Richelle Mead.

(More or less … MORE OR LESS. Shocking review from Leonard here. Having read the novel … there is a zero percent chance they explain the mythology properly. It is completely incomprehensible, even when gathered slowly across 300 pages.)

(Oooof. That looks like quippy garbage … but I could maybe see why the target audience could like it I guess. It gives that classic movie perception of high school … but with vampires … hooray?)

Directors – Mark Waters – (Known For: Mean Girls; Freaky Friday; The Spiderwick Chronicles; Just Like Heaven; Mr. Popper’s Penguins; The House of Yes; Future BMT: Head Over Heels; Bad Santa 2; BMT: Vampire Academy; Ghosts of Girlfriends Past; Notes: Daniel Waters’ (the screenwriter of this film) brother. He is also married to Dina Spybey-Waters who is a very accomplished actress in her own right.)

Daniel Waters (screenplay) – (Known For: Heathers; Batman Returns; Happy Campers; Future BMT: Sex and Death 101; The Adventures of Ford Fairlane; BMT: Vampire Academy; Hudson Hawk; Demolition Man; Razzie Notes: Winner for Worst Screenplay in 1991 for The Adventures of Ford Fairlane; and in 1992 for Hudson Hawk; Notes: He wrote the screenplay for Heathers while working in a video store.)

Actors – Zoey Deutch – (Known For: Set It Up; The Disaster Artist; The Amazing Spider-Man; Before I Fall; Everybody Wants Some!!; Flower; Beautiful Creatures; The Year of Spectacular Men; Roxxy; Future BMT: Why Him?; Good Kids; BMT: Vampire Academy; Dirty Grandpa; Notes: Lea Thompson’s daughter, she is involved in a number of activist causes, including Planned Parenthood.)

Danila Kozlovsky – (Known For: Hardcore Henry; Dovlatov; BMT: Vampire Academy; Notes: Born in Russia he entered and graduated from their Sea Corps in 2002. He then won the Belyy Slon (White Elephant / Best Actor) from The Russian Guild of Film Critics in 2005, and the Zolotoy Orel (Golden Eagle / Best Actor) from The National Academy of Motion Picture Arts and Sciences of Russia in 2013.)

(An unmitigated disaster. Looking at the genres as well this is universally just one of the worst box office performances in quite a while. I gigantic bomb no matter how you cut it.)

#44 for the Vampire genre 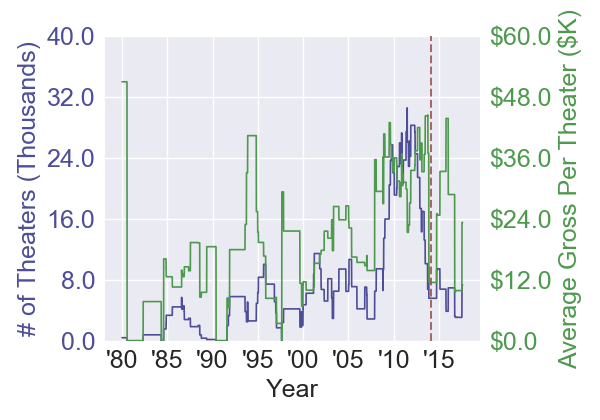 (Not that much more than Transylvania 6-5000 which is … not great. We’ve only seen one other vampire films (Queen of the Damned) which is crazy. Came right at the end of the Twilight vampire boom.)

#60 for the Young-Adult Book Adaptations genre 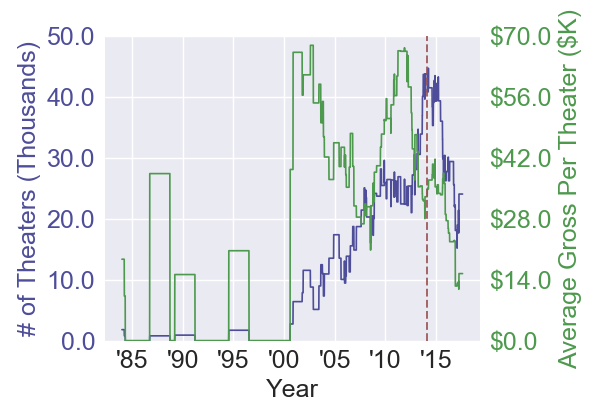 (Aaaaaaand comes right at the beginning of when they oversaturated the YA adaptation genre. Eragon is the best and … this is the lowest we’ve seen! The lowest that qualifies is the absurdly named Blood and Chocolate … what the fuck is that?)

(Wow. It is still number 16 based on actuals which is incredible. Along with the claimed budget I imagine that stopped any discussion of a franchise right quick.)

Rotten Tomatoes – 15% (8/52): Though it may appeal to its built-in fanbase, Vampire Academy’s Twilight-meets-Mean Girls conceit borrows lazily from its predecessors and offers few laughs or thrills to complement its overstuffed backstory.

(Oooof. Does make sense though, they really do have to do a bit of world building to somehow establish why/how a vampire academy exists (as opposed to something like Divergent, where the backstory is mostly kept a mystery). Reviewer Highlight – This is a garbage heap of weak quips – J. R. Jones, Chicago Reader)

(Wait, for real? This is like an ad you’d see for like Vitamin Water or something… this isn’t an ad for Vitamin Water is it? IS IT??? Bold colors and artsy but bad font and boring. Overall middle of the road with a bump for being a little different.)

(At the time this ironic embrace of what would be considered a cheesy pun would have been perceived as cool and “hip” (as the kids say). We are likely at the point where we’ve graduated from this to something else, but I’m not rad enough to know what that something is. Sincerity?… Is sincerely writing terrible puns now funny? I don’t know. Anyway, I don’t see irony when reading these things. I just see a not very good pun used moderately well as a tagline.)

(Hmmmmmm, I’ve seen all of the Twilight films (huge oversight in retrospect, although I guess I wouldn’t mind watching them again). All of these are premo though, kind of amazing they’ve managed to make so many hugely terrible vampire films recently.)

Although the movie did not perform very well at the worldwide box office ($15,391,979 against a $30 million budget) director Mark Waters was eager to give the franchise a second chance in the form of a sequel (Vampire Academy: Frostbite). Studio Preger Entertainment agreed to fund the film on the condition that Mark Waters could get fans to raise the necessary $1.5 million on their own in proof of their support of the film. An indiegogo campaign was started and ran from August 2014 to September 2014. Fans were only able to raise $254,500 by the end of the month, thus leading to Preger Entertainment canceling plans for a sequel. (My god. This is both hilarious and tragic).

Lucy Fry did not receive a callback for the first casting. When the producers started accepting self-tapes she submitted one that landed her a studio callback.

The psi-hounds were originally filmed using trained dogs, but director Mark Waters was not happy with the way they looked. They were replaced with CGI dogs, modeled off a drawing author Richelle Mead made for Waters. (I bet they don’t look hilariously terrible at all)

To prepare for their roles as Dhampir novices and guardians, Zoey Deutch, Cameron Monaghan, and Danila Kozlovsky underwent rigorous training sessions and workouts. (Watch out, we got regular Tom Cruises over here … Awww, I feel bad about that joke, you guys did work hard I bet)

Dimitri is a big fan of westerns, hence his trademark duster coat. He can be seen reading western novels and several posters are visible in his room. (That’s embarrassing)

Richelle Mead: The author can be seen walking past the doors just after Mr. Meissner’s class. (Fun fact)

After Rose Hathaway sedates Headmistress Kirova, before saving Lissa Dragomir, Kirova says, “I could have been a model. A man in Milan gave me his card when I was 16.” Kirova was played by Olga Kurylenko who was a model and began her career in Paris at age 16. (Whaaaaaaaaa?)