“Just be careful in there,” Sergeant Godzilla says and he shakes his head and zooms away. Jamie and Patrick enter the troll’s apartment and the aroma is overwhelming. Never have they smelled something quite like it. They hesitantly ask, “Is that… banana bread?” The troll laughs. Of course it is and of course they can have some. The pleasantries continue and Jamie and Patrick find themselves thinking that perhaps this troll isn’t as bad as Godzilla thought. He almost seems like… a friend. And friends don’t trick friends. Those are the rules. “Gerald,” Patrick asks, “Have you ever heard of a couple of gritty cops named Rich and Poe?” For a moment it looks like Gerald’s smile has turned to a snarl, but then it’s gone. “Oh, why yes. Nasty fellows. Always after treasures and antiquities. Gets them tied up in nasty plots. Why?” Patrick hesitates, but Gerald seems fine now. Same old Gerald they know and love. “Oh no reason,” he says, “they… are our uncles.” Gerald eyes them. “Is that right? Well there is a way to find them but… nevermind, you wouldn’t be interested.” They prod him forward and Gerald smiles, “It’s called the Medallion of Wisdom. With it you can find whatever you desire. Some think it’s legend, but I know where it is,” the troll leans in hungrily, “Make a promise and I’ll tell you. Promise you’ll help me in the future.” Patrick has seen Gerald’s true face and is horrified. No. No, never. They’ll never agree with this monster.  “Yeah, sure,” Jamie mumbles over a mouthful of banana bread as Patrick looks on in horror. Gerald smiles wickedly, “It’s in a ski chalet of a man I know. A real rich guy with lots of treasures but sadness in his heart.” That’s right! We’re watching Town & Country. A story of two cops Johnny Town and Fred Country. Town is a small town sheriff with a southern twang and smarts to boot, while Country is a big city cop ready to crack some skulls if it means solving the big case… oh wait, that’s just what I wish it was. It’s actually a Warren Beatty film about a rich asshole or something. Huge bomb, but not big enough to be the on the worst ever list because it was rejected. Let’s go! 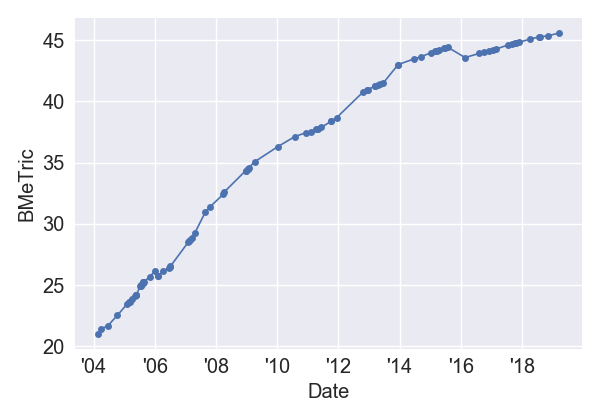 (Wow, extremely impressive hold on the rating. Presumably that’s because not very many people just stumble upon the film, but rather they know it is going to be garbage going in. Regardless, there is potential there. A good ratings hold is usually a good sign.)

Leonard Maltin – 1.5 stars – Two couples celebrate their long-term marriages – just as both relationships start to come apart. A train wreck of a movie that starts out as romantic comedy, lurches into French farce, then lumbers along to a point beyond comprehension. The cast tries its best. Cowritten by Buck Henry, who appears as a divorce lawyer. Filmed mostly in 1998.

(I honestly had a hard time parsing this review initially, much like this film it went on just long enough that I kind of lost the thread. Having now watched this film Maltin nails it, it really is like three different movies stuck together.)

(What a strange looking film … Like really, I can’t even really place the sensibility. I guess maybe it goes back to the comedies of the 60s and 70s? This flippant observational humor about cheating on your spouse. With a oddly goofy twist.)

Directors – Peter Chelsom – (Known For: Serendipity; Hannah Montana: The Movie; Shall We Dance; The Mighty; Funny Bones; Hear My Song; BMT: Town & Country; The Space Between Us; Razzie Notes: Nominee for Worst Director for Town & Country in 2002; Notes: A very accomplished British director. Considers surviving this shoot an achievement in itself.)

Writers – Michael Laughlin (written by) – (Known For: Strange Invaders; Strange Behavior; BMT: Town & Country; Notes: He seems like he had a crazy life. He’s 80, he produced films in the US and the UK, he lived in Paris, he seems to have been all up in Hollywood for his entire life, and yet his filmography is still rather svelte.)

Buck Henry (written by) – (Known For: The Graduate; Get Smart; To Die For; Catch-22; The Last Act; Candy; What’s Up, Doc?; The Owl and the Pussycat; The Day of the Dolphin; Future BMT: The Nude Bomb; Protocol; First Family; BMT: Town & Country; Notes: Directed Heaven Can Wait with Beatty. Is the founding member of the Five Timer’s Club on SNL.)

Actors – Warren Beatty – (Known For: Heaven Can Wait; Dick Tracy; Bonnie and Clyde; Shampoo; Rules Don’t Apply; Splendour in the Grass; Bugsy; Reds; McCabe & Mrs. Miller; The Parallax View; Bulworth; Lilith; The Heist; Future BMT: Love Affair; The Fortune; BMT: Ishtar; Town & Country; Razzie Notes: Nominee for Worst Director for Town & Country in 2002; and Nominee for Worst Remake or Sequel for Love Affair in 1995; Notes: Nominated four times for Best Actor (embarrassingly lost to In the Heat of the Night in the same year he was in Bonnie and Clyde. Embarrassing because he wasn’t up against Portier, he was up against Steiger which is ridiculous). Won Best Director of Reds.)

Diane Keaton – (Known For: The Godfather; The Godfather: Part II; Book Club; The Godfather: Part III; Annie Hall; Something’s Gotta Give; Finding Dory; Baby Boom; The First Wives Club; Father of the Bride; Manhattan; Morning Glory; The Family Stone; Reds; Looking for Mr. Goodbar; Marvin’s Room; Father of the Bride Part II; Radio Days; Sleeper; Love and Death; Future BMT: Look Who’s Talking Now; Hanging Up; Mama’s Boy; Mad Money; Christmas with the Coopers; Smother; And So It Goes; Darling Companion; The Other Sister; The Lemon Sisters; Mrs. Soffel; BMT: Town & Country; The Big Wedding; Because I Said So; Razzie Notes: Nominee for Worst Actress for Because I Said So in 2008; Notes: Y’all know BMT super star Diane Keaton! Amazingly still a fashion icon into her seventies, literally all of the news stories about her is about what she’s wearing.)

(Actually considered one of the greatest financial disasters in the history of film, up with The Adventures of Pluto Nash. I would say it likely destroyed Beatty in terms of getting films done as the on-set reports kind of make it sound like it was his fault they went so far over budget.)

#282 for the Romantic Comedy genre

(Almost the worst we’ve ever seen. Say It Isn’t So narrowly edges it out. It looks like rom-coms are coming back into style a bit. Especially if things follow Crazy Rich Asian’s lead.)

Rotten Tomatoes – 13% (12/93): Afflicted with extensive re-editing and re-writing, this sex comedy feels confusingly choppy. Also, the main characters are so wealthy and privileged that it’s difficult to feel sympathy for their problems.

(Yeah based on the trailer alone the people seem totally despicable. There was a trend in comedies wasn’t there? Where, in order to facilitate all of the wacky adventures the characters were going to go on, they needed to be fabulously wealthy. And probably a misguided idea that people want to gawk at rich people’s houses or something.) 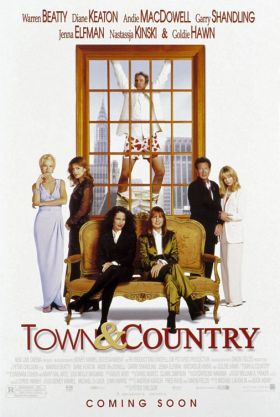 (I don’t like it but I appreciate it. The framing, the font, it’s all good… but just doesn’t work for me without a color scheme. My eyes tell me ‘No.’)

(I don’t see this on the poster, but I’ll allow it because it’s solid. It’s short-ish and clever and tells me a little something. Good stuff.)

(Dr. T & the Women, my old friend. Probably the highest BMeTric of any film that doesn’t actually qualify. I’ve seen the Canyons. It is terrible.)

Welcome to Earf (HoE Number 12) – The shortest path through The Movie Database cast lists using only BMT films is: Josh Hartnett is No. 9 billed in Town & Country and No. 3 billed in Here on Earth => 9 + 3 = 12. There is no shorter path at the moment.

Buck Henry was hired for what was originally only going to be a few weeks of script polishing work. Eventually, he stayed on for several months and ended up earning (by some accounts) three million dollars for rewriting roughly half of the script. Henry has stated that he bought a new house with the money he made on this “quick rewrite assignment”.

Following the film’s failure, Warren Beatty wasn’t involved with another film until Rules Don’t Apply (2016). (Yeah, he didn’t have a particularly good record from the 90s onward I don’t think)

Over forty million dollars had been spent on actor and writer salaries even before the cameras began rolling. (Oof)

The film was released three years after filming initially began in 1998.

Filming was originally supposed to wrap by the fall of 1998 for a summer or fall 1999 release. Various problems occurred during filming, however, including Warren Beatty’s meticulous demand for many takes.

Filming had to be shut down after five months so that Diane Keaton, Garry Shandling, and Jenna Elfman could honor prior commitments. Shandling was in What Planet Are You From? (2000), while Keaton was in Hanging Up (2000), which she also directed. It would take a full year before they could gather the cast back together to film the new pages written by Buck Henry.

Reshoots were scheduled to begin on April 10, 2000, and expected to last just a couple of weeks. However, filming continued through June 2000, when it finally wrapped two years after principal photography originally began.

The winter mountain scenes (filmed in Sun Valley, Idaho) started filming in the early winter. Unfortunately, there was no snow on the ground at the time. Several scenes were filmed with man-made snow. After filming these scenes, over a foot of natural snow feel the next day. Some of the scenes were re-shot in the “natural” background.

Gérard Depardieu was cast but had to be replaced by Garry Shandling because of a road accident.

Peter Chelsom and Warren Beatty clashed frequently over various details in the script and the visuals.

Such was the protracted nature of the film’s production, it burned through 13 release dates.