As Rich does his best to battle Assassinbot 3000 in space, Poe is forced to watch on a big screen by Gruber, who screams in delight, “Bwahaha. I have finally won. You all will die. Except for you, Poe. You will be forced to watch it all.” Suddenly Jade is by his side and whispers softly to him something about family and to always be himself. Rich’s last words, apparently. Odd. He tries to decipher what it could mean. Be himself… be… HIMSELF! Of course. His time machine! “Granny, you still have my seventh grade science project?” he whispers to her. She nods silently that she does. Freeing a hand, he reaches for her otherwise innocent looking keychain, which in fact was a time machine dongle that he never quite got working. He manages to tap into the mainframe and bypass the firewall in order to overclock the CPU and reroute power to the tiny dongle. A time bubble forms behind the distracted Gruber and a monstrous hooded figure emerges. “Are… are you me?” Poe stammers. The figure takes off his hood and is revealed to be a spider monster. “But how… why am I a spider monster?” The spider monster responds, “all the monstrous things that Gruber forces you to watch. It turns you into this.” Poe is still a little confused, “I become a spider monster?” The spider monster nods his head. Well alright. The spider monster frees them all from their ropes and Poe and him perform a patented spider chop to Gruber’s neck rendering him unconscious. “Thanks, Spider Monster Me,” says Poe, but his joy is crushed as the spider monster looms over him and begins to laugh. “Bwahahaha, I was never you, Poe. I was Spider Monster Gruber this entire time! You have still failed. I have only risen from the puny human ashes to become my true, dark self. Dark Gruber!” That’s right! After a long winter and spring nearly bereft of bad films it’s been a veritable smorgasbord lately. This includes some very big failures of some very big franchises. So we are taking the plunge and really putting a huge burden on ourselves by watching the latest (last?) installment of the X-Men prequels live and in theaters! X-Men: Dark Phoenix is one of only two X-Men films that qualifies for BMT (the other being X-Men Origins: Wolverine) and comes with three previous installments of which I saw just one. So I got some work ahead of me. You better be worth it Dark Phoenix. Let’s go!

(A flat six sounds correct as the initial rating. I think this means the BMeTric is going to fall quite a bit over time. The rating usually goes up as general audiences rate the film, so I assume it’ll go to like .. 6.2 or something.)

RogerEbert.com – 1.5 stars –  Everyone seems to agree that this X-venture is the last cinematic one for a long time. Fox is being rolled into the Marvel empire and we probably won’t see Professor X, Magneto, or even Wolverine for years. By then, everyone will have forgotten “Dark Phoenix.” Heck, that will happen by the end of the month. After all, nobody cares anymore.

(Ha! Basically: why does this movie exist anymore? And I have to say, that basically agrees with my perception in the lead up to the film as well.)

(Pretty good trailer to be honest. As people online pointed out, it is a bit spoilie, in that you can pretty much guess what happens to Jennifer Lawrence and when given the brief bits shown in the trailer, but I do think that is a pretty compelling trailer indicating that Dark Phoenix is what causes humanity to close ranks somewhat against the X-Men and for the school to become as isolated as it seems in the original film.)

Directors – Simon Kinberg – (BMT: X-Men: Dark Phoenix; Razzie Notes: Nominee for Worst Screenplay for Fantastic Four in 2016; Notes: He developed the new Twilight Zone. He also directed one of the episodes. That was his only other directorial effort prior to this film.)

Writers – John Byrne and Chris Claremont and Dave Cockrum (story “The Dark Phoenix Saga”) – (BMT: X-Men: Dark Phoenix; Notes: They wrote the original Marvel run that the film is based on.)

(This is a gigantic bomb. Even worldwide this is going to lose around $100 million if you calculate the net in the traditional manner (needing two times the budget). The nail in the coffin for this iteration of X-Men.)

#119 for the Comic Book Adaptation genre

(Around Judge Dredd at the moment (and it really isn’t going to get much better to be honest). This is our 22nd comic book film. It is obviously huge right now.)

#97 for the Superhero genre

(Our 17th superhero film. Right now this is around Catwoman. It’ll be a bit better than that … maybe like the new Fantastic Four maybe. Again, huge right now, so it makes sense the film is our right now.)

Rotten Tomatoes – 23% (67/290): Dark Phoenix ends an era of the X-Men franchise by taking a second stab at adapting a classic comics arc — with deeply disappointing results.

(Yep, meaningless, emotionless, and dull is what all the reviews say. Which is not what you want. Reviewer Highlight: “Logan” is the proper finale to the “X-Men” film series. “X-Men: Dark Phoenix”… is so disappointing that it doesn’t deserve that honor. – Matthew Rozsa, Salon.com) 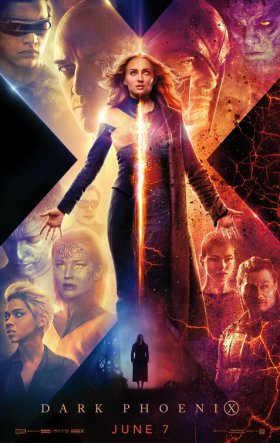 (I don’t want to be too harsh, but this is trash. Why are there so many colors? It’s like all the colors that ever existed are on this poster. Gross. Almost an F… just needs to be a tad stupider to really hit the bottom.)

(I mean, I guess this is fine for fans of the series. If you are excited for the Dark Phoenix storyline this could get you all jazzed up… but otherwise it’s pretty blah.)

(Another week, another reminded that I’ve seen Street Fighter like 4 times, but never for BMT. Which is ridiculous. The Island of Dr. Moreau is easily going to be the best of that batch.)

Notes – Hans Zimmer decided to retire from composing superhero movies after having worked on scores for Batman, Superman, Wonder Woman, and Spider-Man, but Simon Kinberg convinced him to work on this film.

This will be the first X-Men film to not feature or reference either Logan/Wolverine or the actor that portrays him, Hugh Jackman. This is because Jackman retired from the role, which he portrayed since X-Men (2000). He was briefly featured in Deadpool 2 (2018) through reused and stock footage from X-Men Origins: Wolverine (2009).

Mystique and Magneto were not originally intended to appear as Jennifer Lawrence implied in several interviews that she was done with playing Mystique, though she said in an interview that she had a change of heart as she didn’t want fans to be confused if her character got the ‘Chuck Cunningham Syndrome treatment’. (I’ve never heard of that, but it is great)

Was originally scheduled for a November 2nd, 2018 release, but due to 20th Century Fox wanting reshoots in March 2018, the film was delayed by 3 months to February 15th, 2019, and then another 4 months to June 7th, 2019. (It would have been better off in February. Rumor is that the original story was the same as Captain Marvel, and the delays meant they had to re-cut it on the fly to differentiate itself)

Director Simon Kinberg has stated that he cut a good deal of the original storyline of the Dark Phoenix to focus more on ending the storyline that originally began in X: First Class (2011) and focus more on Jean’s character for the film. As such the elements of the Hellfire Club and the alien race known Shi’ar and their Shi’ar Empire from the original comic book storyline were removed from the film adaption to cut down on unnecessary sub-plots. Members of the Hellfire Club such as Sebastian Shaw and Emma Frost previously appeared in X: First Class (2011).

Simon Kinberg describes the land of Genosha as Magneto’s Israel: “It’s a land built for mutants, a homeland where they can be safe and self-sufficient.” In keeping with Magneto’s Jewish heritage, Israel is the land where the Hebrews founded and made their home after being set free from Egypt. (That’s pretty great)

In her role as Mystique, Jennifer Lawrence is now actually older than Rebecca Romijn was when she originated the role in the first film of the franchise. (fun)

The third act was originally going to take place in space. After re-shoots were completed, it was changed to a sequence where the X-Men are kidnapped and taken aboard a military train. (Yes, I think this is the Captain Marvel thing. I think they wanted something that was similar to some sequence in Captain Marvel, but had to change it)