Rich looks on in horror at the scene unfolding on the video screen near his hiding place aboard the space shuttle. Dark Gruber, the spider monster, laughs maniacally at his puny human captives. He looks primed to destroy Poe, his granny, Jade, and the astronaut Jim McBrawn. At the same time, Assassinbot 3000 prowls the corridors of the space shuttle looking to complete its primary task: destroy Rich. Did Poe not get his message about the importance of family? Or maybe he never realized what was so obviously staring at him in the face. Welp, it’s all up to him now as Dark Gruber looks pretty crude, rude and full of ‘tude (as the kids say) and he better communicate to Poe before it’s too late. Leaping from his hiding place, Rich begins to tussle with the Assassinbot 3000. His shirt is ripped off in the process, but not before he is able to grab some vital tubing. Ripping it free he’s covered with a spray of robot grease leaving his well-toned muscles glistening. They grapple for 30-40 minutes and each second weakens Rich further. Thinking quick he backflips his way around the robot’s laser beams to grab an ice cold Mountain Dew. With his batteries fully charged, Rich is able to land a high octane punch right in Assassinbot’s circuit box, disabling it. Rushing to the shuttle’s communication system he screams into the video feed, “Poe! Poe! It’s about family! It was always about family” Poe looks up, quaking under the stare of Dark Gruber and his uncontrollable spider rage. “Family?… but it’s just me and Granny.” Suddenly the astronaut Jim McBrawn steps up, “No, Poe… Rich is right. It’s time you knew the truth… I’m… I’m your son.” What a twist! That’s right! We are watching the Tim Allen classic Jungle 2 Jungle. I remember this film from my youth but obviously didn’t remember that Siskel clocked this in as his worst of 1997. Ebert’s for that year? The Year of the Horse. The film we all know and love. Let’s go!

Meanwhile… two hooded figures emerge from the jungle surrounding Ecumenopolis to gaze upon their final destination. They crack their knuckles as prepare their disguises. Simple father and son wasteland farmers looking to sell their wares in the BMTverse. That’s right! We’re also watching Little Indian, Big City, the French original from which Jungle 2 Jungle was adapted. Interestingly that film was Ebert’s worst of 1996… back to back champs! What a pairing for Bring a Friend. This also was a film that was not available on DVD with the original English dubbing. So I did the unthinkable. I bought that VHS and had a friend burn it. Don’t look at me, I’m hideous. Let’s go! 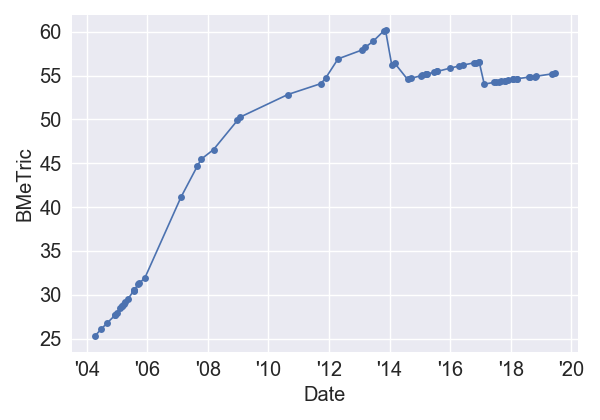 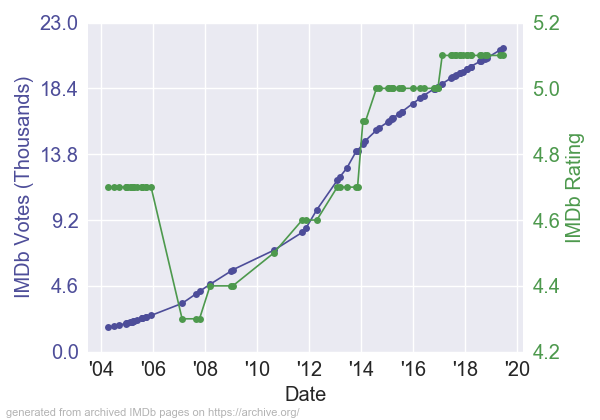 (Wow that is a really low IMDb score. I find it odd that people would go online to just rail on this 1997 kids film … but humans are a strange creature.)

Leonard Maltin – 3 stars –  Very likable, if predictable, Disney comedy about a career-obsessed New Yorker who goes to the Amazon to get final divorce papers signed by his ex-wife and comes back with a son he never knew he had. The boy’s jungle instincts are no match for life in Manhattan – though he does manage to score some points along the way. Good laughs throughout this family-oriented feature, a remake of the French hit Little Indian, Big City.

(Wow, this stands in stark contract to his 1.5 star review of Little Indian, Big City which he called a “[d]opey French kiddie comedy.” I seems like a difference in comedic tastes. Some people like seeing not-very-good French actors fall down, and some people don’t.)

Writers – Hervé Palud (earlier screenplay Un indien dans la ville) – (Future BMT: Un indien dans la ville; BMT: Jungle 2 Jungle; Notes: The original’s director as well. He was the one that insisted the original be dubbed for its American release because he wanted to get people to go see it and he didn’t think people wanted to read subtitles. His son directed future BMT The Eye.)

Bruce A. Evans and Raynold Gideon (screenplay) – (Known For: Stand by Me; Mr. Brooks; Starman; Made in Heaven; Future BMT: Cutthroat Island; Kuffs; BMT: Jungle 2 Jungle; Notes: Struggled to get original screenplays produced after producing a bunch of rewrites and remakes (of this is one). Mr. Brooks revitalized their career a bit.)

Martin Short – (Known For: Inherent Vice; Mars Attacks!; Father of the Bride; The Spiderwick Chronicles; Treasure Planet; The Prince of Egypt; Madagascar 3: Europe’s Most Wanted; ¡Three Amigos!; Get Over It; Kaze tachinu; Innerspace; Father of the Bride Part II; Frankenweenie; Jimmy Neutron: Boy Genius; The Big Picture; Mumford; Cross My Heart; Future BMT: The Santa Clause 3: The Escape Clause; Hoodwinked Too! Hood vs. Evil; Captain Ron; Clifford; A Simple Wish; Pure Luck; The Pebble and the Penguin; We’re Back! A Dinosaur’s Story; Three Fugitives; Jiminy Glick in Lalawood; BMT: Jungle 2 Jungle; Legends of Oz: Dorothy’s Return; Razzie Notes: Nominee for Worst Supporting Actor, and Worst Screen Couple for The Santa Clause 3: The Escape Clause in 2007; Notes: Martin Short is hilarious. Him as Jiminy Glick was some of the funniest stuff I’ve ever seen, and he seems genuinely nice.)

JoBeth Williams – (Known For: Poltergeist; Kramer vs. Kramer; Wyatt Earp; The Big Chill; The Perfect Catch; Stir Crazy; The Big Year; The Dogs of War; In the Land of Women; Teachers; TiMER; Desert Bloom; Barracuda; Just Write; Future BMT: Poltergeist II: The Other Side; Switch; Dutch; BMT: Stop! Or My Mom Will Shoot; Jungle 2 Jungle; Notes: John Pasquin’s wife. Apparently turned down the role of Murphy Brown. The character was apparently created with her in mind.)

#17 for the Comedy – Fish-Out-of-Water Father genre 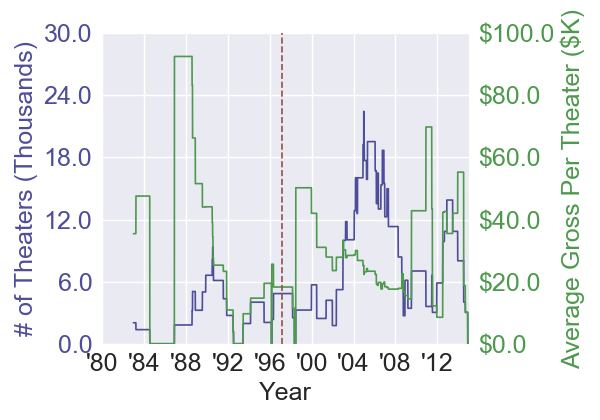 (I love fish out of water parents. Cheaper by the Dozen 2, The Pacifier, The Game Plan, Are We There Yet?, Old Dogs are all honestly classics. This appears to pre-date the big 2000s boom. Maybe Home Improvement itself was kind of a precursor to the “silly dad” sitcom trope.) 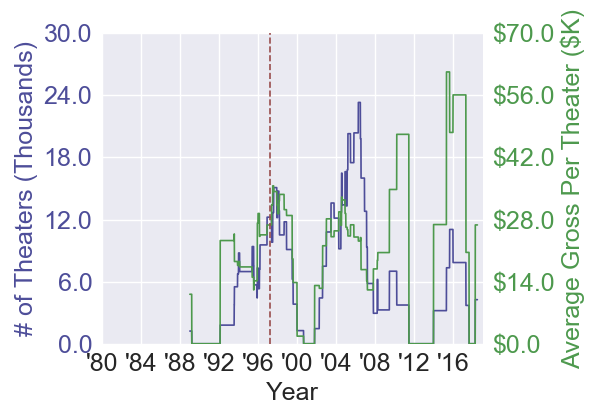 (I just love how remakes come in waves. This was right in the first boom. The second being in the Golden Age of Bad Movies, the 2000s.)

#8 for the Remake – French genre 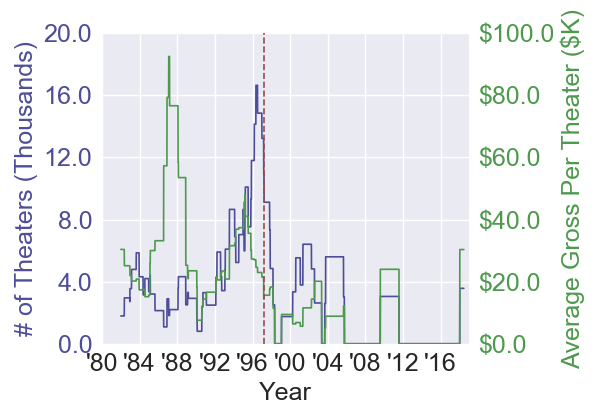 (Ha! It is at the literal peak of … French remakes? The Birdcage, True Lies … sounds about right. This is only our second we’ve done after Taxi.) 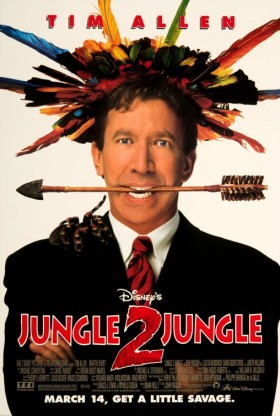 (I do respect these types of posters as they fully admit that the film is based entirely on one premise: Tim Allen is involved in the jungle! There is nothing else you need to know. If you are not buying a ticket based on that then the film offers nothing else that could convince you. That being said it’s not a great poster, but I enjoy the fun font on the “2”. On that alone I will elevate it to the middle.)

(Oh boy… that’s insulting. I would like to think they would have known better, but I think I forget exactly how much was allowed to fly not that long ago. I have to give it an F because… you know… it’s racist.)

(I’m excited for Island of Dr. Moreau. I feel like it is aging like a fine wine. Tees Maar Khan is never happening, you can’t make me.)

Welcome to Earf (HoE Number 7) – The shortest path through The Movie Database cast lists using only BMT films is: Leelee Sobieski is No. 6 billed in Jungle 2 Jungle and No. 1 billed in Here on Earth => 6 + 1 = 7. There is no shorter path at the moment.

Notes – An entire day’s worth of film was lost when it was believed to have been accidentally left in a New York City taxicab. The film was never recovered.

An American remake of the successful French movie Un indien dans la ville (1994) (An Indian In The City). The plot follows the original fairly closely, except that the original was set in Paris rather than New York, and Mimi-Siku climbed the Eiffel Tower rather than the Statue of Liberty.

After shooting Charlotte’s cat with the dart, Michael exclaims “Oh no!” in the same grunting manner as Tim Allen’s character, Tim Taylor, in Home Improvement (1991).

In addition to relocating from Paris to New York, the character Mimi-Siku was made much older than the preteen in the French version. This was largely due to Americans’ general discomfort with young love, under the explanation that “a teenager can get into more trouble.” Additionally, despite American Mimi-Siku’s having lived in the wild, there’s less difference in the skin tones of the two male leads than in the original French film. This was done to emphasize their kinship.

The book Mimi-Siku is reading aloud at the end is “The Call of the Wild” by Jack London.

Allen and Short would later star together in The Santa Clause 3: The Escape Clause (2006).

When Michael, Richard and Mimi-Siku are visiting Jovanovich after they ring the doorbell, Jovanovich yells “Open damn door!” then he says “Chort vozmi!”, which in Russian literally translates to “The devil take it!”

At one point, when Mimi walks outside along a ledge at Charlotte’s office, a man exclaims: “He’s doing a Fay Wray!” This is in reference to the actress Fay Wray, whom was the lead in the 1933 movie King Kong. She was carried to the top of the Empire State Building by King Kong.