Meanwhile… Poe and Brock are getting psyched for the big championship game. Suddenly Poe watches in alarm as the lawnmower men around the field stop in unison, their eyes suddenly glassy and unseeing. “Lawnmower Men,” Poe whispers while Brock stares on in shock. “Lawnmower Men? It can’t be. They… they are just silly legends used to scare kids.” But no, they are real and something has brought them out of their slumber. Poe suddenly realizes what it is and turns to Brock, “It’s Rich. He needs my help.” One of the other players begins to protest, but Brock stops them, “If you need my help, you have my bat, bro.” And they seal the deal with a Predator Handshake. That’s right! In celebration of the 500th BMT film (say what?!) we are also watching The Lawnmower Man and Lawnmower Man 2: Beyond Cyberspace. The sequel has been on my bad movie bucket list forever because it actually seems impossible that it got released to theaters. But it did and we couldn’t have asked for a better pairing for this celebration than the hacking computer technobabble extravaganza of Hackers and the Lawnmower Man franchise. Let’s go! 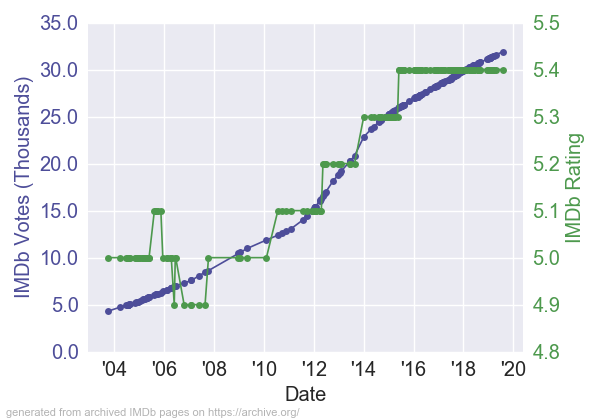 (Solidly below average. If it gets a few thousand more votes it could creep back up above 50, and that seems pretty appropriate given everything I know about it now.)

Leonard Maltin – 1.5 stars –  Scientist Brosnan needs a guinea pig for hitherto failed experiments in drug therapy and computer instruction; who better than the grinning mental defective who mows his lawn? At least the pyrotechnics at the end (simulating “virtual reality”) are full of visual buzz. Fahey in a blond wig is really tough to take. Has nothing to do with the Stephen King short story it’s ostensibly based on.

(As usual Leonard teases me with his semi-colon work, he’s a true artist. And then “hitherto”? Now I’m really into it. This review is also somehow a novel, it is incredibly long, and I love it. He clearly just hated this film.)

(NOT FROM THE IMAGINATION OF STEPHEN KING. That is very very specifically not the case. That trailer makes the film look a lot more interesting that I suspect it ultimately will be.)

Writers – Stephen King (title only) (credit removed following lawsuit) – (Known For: It; Pet Sematary; The Shawshank Redemption; The Shining; Stand by Me; Pet Sematary; The Green Mile; Gerald’s Game; The Mist; Carrie; 1922; Misery; The Running Man; Christine; Carrie; Cujo; The Dead Zone; Creepshow; Silver Bullet; 1408; Future BMT: Cell; The Rage: Carrie 2; The Mangler; Children of the Corn II: The Final Sacrifice; Sleepwalkers; Graveyard Shift; The Dark Tower; Children of the Corn; Riding the Bullet; A Good Marriage; Thinner; Firestarter; Creepshow 2; The Night Flier; Needful Things; Tales from the Darkside: The Movie; BMT: Dreamcatcher; The Lawnmower Man; Maximum Overdrive; Razzie Notes: Nominee for Worst Director for Maximum Overdrive in 1987; Notes: This is a hilarious credit (apparently removed). I’ve read The Lawnmower Man short story by Stephen King and it has literally nothing to do with this film… I haven’t even see this movie but I guarantee you that.)

Gimel Everett (screenplay) – (BMT: The Lawnmower Man; Notes: Producer who worked with Leonard on a number of credits. Died in 2011 at the age of 60.)

Pierce Brosnan – (Known For: Mamma Mia! Here We Go Again; The World Is Not Enough; Mrs. Doubtfire; Mamma Mia!; The Foreigner; The World’s End; GoldenEye; Percy Jackson & the Lightning Thief; Mars Attacks!; Die Another Day; Tomorrow Never Dies; No Escape; The Ghost; The Thomas Crown Affair; Final Score; Seraphim Falls; Spinning Man; The Long Good Friday; The Tailor of Panama; The Mirror Has Two Faces; Future BMT: I Don’t Know How She Does It; Urge; I.T.; Survivor; Dante’s Peak; Lessons in Love; The Love Punch; Laws of Attraction; Salvation Boulevard; Nomads; The November Man; After the Sunset; Live Wire; Love Affair; A Long Way Down; The Magic Sword: Quest for Camelot; The Only Living Boy in New York; Grey Owl; A Christmas Star; BMT: The Lawnmower Man; Razzie Notes: Winner for Worst Supporting Actor for Mamma Mia! in 2009; and Nominee for Worst Screen Couple for The World Is Not Enough in 2000; Notes: They just announced he is going to be working with Will Ferrell and Rachel McAdams in a comedy film focused on the Eurovision Song Contest. I highly recommend Eurovision, it is hilarious.)

Jenny Wright – (Known For: St. Elmo’s Fire; Near Dark; Pink Floyd: The Wall; The World According to Garp; A Shock to the System; The Chocolate War; I, Madman; Future BMT: Young Guns II: Blaze of Glory; Queens Logic; BMT: The Lawnmower Man; Notes: Apparently people don’t even know where she currently is as they attempted to locate her for a Near Dark reunion unsuccessfully. Was apparently involved with Nic Cage for two years.)

(That is an astonishingly high number. I’m going to assume that that is partially because the Stephen King name actually carried a lot of cache at the time. And it is absolutely no wonder they were already considering a sequel by the time the VHS was released (see the notes))

(This predates most of the other R-rated Horror films that have some out which have become a very on trend genre of late.)

#9 for the Virtual Reality genre

(Oh wow, I kind of didn’t realize both this and Hackers were put into this genre. That is awesome. We’ve officially doubled the number of Virtual Reality movies we’ve seen for BMT.)

(Basically all the reviews say that it is cheesy and the only thing it really has going for it are the special effects which admittedly dazzled at the time. Reviewer Highlight: So loosely based on a Stephen King short story as to constitute fraud, The Lawnmower Man goes right to the bottom of a growing list of failed King adaptations. – Richard Harrington, Washington Post)

(This entire thing is silly. Look at that poster. It is literally a man mowing grass with a giant eye in the sky with a… gyroscope? In the center? What are you supposed to think this film is about? Spacing is fine, as is the color scheme. The font is unfortunate and I know in my heart they could have done better.)

(I like this. Tells me what’s up and does it in a clever way. It’s a little long, but you get what you pay for.)

(Two of the ten! I quite like that. None of the other one except maybe Spy Kids 3 are on our radar.)

Notes – New Line Cinema had obtained the rights to the Stephen King short story “The Lawnmower Man”, and the producers also had an unrelated script called “Cyber God”. They simply placed King’s title on the production of “Cyber God”. King was furious at this abuse of his name, and he sued the studio to have his name and title removed from the film and promotion. They refused, until the studio was ordered to pay ten thousand dollars and full profits. (Yeah that makes more sense than actually thinking this was an adaptation)

The scene where the cop (Troy Evans) says that the missing piece of the dead man is in the bird bath, is the only thing in the movie that was taken from Stephen King’s short story.

Several of the symbols Jobe (Jeff Fahey) sees flying at him, during his first VR treatment, are demon evocation seals taken from the infamous Key of Solomon.

Dr. Angelo’s line “I’ve decided to take my work back underground”, was used as a sample in the intro track for the Music For The Jilted Generation album by The Prodigy. (Yet another connection to Hackers, Voodoo People from that album is on the soundtrack)

There are three video games based on the movie. Scrolling action game The Lawnmower Man (1993) for Game Boy, Genesis, and Super Nintendo, loosely follows the plot of the movie. FMV adventure game The Lawnmower Man (1993) for DOS, Macintosh, and SEGA CD, uses clips from the movie, and is a direct sequel to the movie, since Its plot begins where the movie ends. Adventure game Cyberwar (1994) for DOS and PlayStation is a non-FMV sequel to the FMV game.