Adam Banks, the producer of the latest Rich and Poe film, sits sweating as he watches Jamie and Patrick rant and rave around his office. Having already relented in allowing them to star in the film, he is shocked to hear that they now want to do their own stunts too. These stunts involve jumping between two helicopter cruise ships hovering over the blue waters of the French Riviera and Banks just isn’t sure he can insure it. He’s also not sure helicopter cruise ships exists. “Then invent one,” Jamie screams, “how much did our last film make?” He remarks with crossed arms waiting silently for a response. Banks mumbles the well known 2.3 billion dollar figure. “Then use is,” Jamie snidely remarks. There have been grumblings at the studio that this is some elaborate scheme set up by the auteurs to get out of there 20 film contract early, but Banks isn’t so sure. It seems to him that they have simply gone insane. Finally he relents and orders the helicopter cruise ships to be constructed. Once Jamie and Patrick are safely on the corporate jet back to the French Riviera he buzzes his secretary to set up a meeting ASAP. A few hours later Banks sits with a man dressed in dark glasses and a leather duster. “Rod, I need your help. I’ve got a delicate matter that needs some… discretion.” The man smiles, “Well Banks, you know that there’s only one thing I do better than discretion,” Banks nods and Rod finishes, “Sex is what I’m referring to.” And Banks nods again, “great well, really just discretion needed on this one.” At that they rise and shake hands. “You know, Rod, you really are one bad mother…” But Rod interrupts him “shut you’re fucking mouth.” That’s right! We are watching the 2019 entry in the Shaft saga that we were all scrambling for. Everywhere we went all we heard was “gee whiz I sure do hope we get a Shaft for a new generation.” Well we asked, they delivered in a neat BMT package. Gives us a chance to watch the original and the Samuel L. Jackson 2000 entry to get uptodate on the franchise, which is exciting. Let’s go! 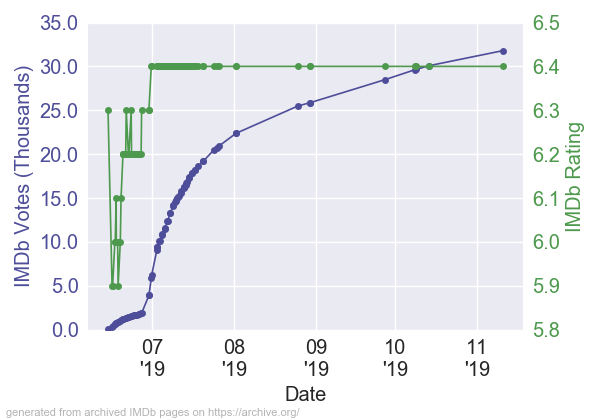 (Genuinely strange. Usually things go the other way. Usually fans of the film come in hot with above average ratings during the initial theatrical run, and then it drops afterwards. This time people seeing it in theaters seem to hate it, but then it has stood steady at a pretty above average 6.4. I don’t really know what to make of that. Probably just need to wait a little longer for things to clarify.)

RogerEbert.com – 0.5 stars –  This movie is “ruin your childhood” bad, right down to the hideous auto-tuned end credits song they chose to use instead of the original “Theme From Shaft.” I say this flick Shaft is a bad movie. Shut yo’ mouth.

(Somehow this review is a lot kinder than I imagined it would be. Most reviews can be boiled down to “Ok, Boomer”. Mainly because whole scenes are (apparently) devoted to women lusting over Shaft shooting a bunch of people and making fun of Millenials … so just ruining your childhood seems like a step up in that context.)

(Sigh. So I know someone who’s seen this and he describes it as Boomer Humor. Now, I don’t hold prejudices against any movie. I’m happy to watch any film no matter how far from the intended audience I am. As Shaft says, I’m an equal opportunity stare-in-stony-silence-at-not-funny-films … person. But so far that guy seems right, so this is going to be one long film. Sigh.)

Directors – Tim Story – (Known For: Think Like a Man; Barbershop; Future BMT: Fantastic 4: Rise of the Silver Surfer; Fantastic Four; Think Like a Man Too; BMT: Taxi; Ride Along 2; Ride Along; Shaft; Notes: He kind of has an amazing career. Everything from small indie films, to giant comic book blockbusters, and now he’s attached to Tom & Jerry, Ride Along 3, and Monopoly in the next few years! I look forward to watching many Tim Story films for the next decade to come.)

Alex Barnow (written by) – (BMT: Shaft; Notes: A television writer almost exclusively. He wrote for a ton of shows including Family Guy and The Goldbergs.)

Ernest Tidyman (based upon the character John Shaft from the novel by) – (Known For: Shaft; The French Connection; High Plains Drifter; Shaft; Shaft in Africa; Shaft’s Big Score!; BMT: Shaft; Notes: I … did not realize it was a book series. He wrote seven Shaft novels between 1970 and 1975.)

Richard Roundtree – (Known For: Seven; What Men Want; Brick; George of the Jungle; Shaft; Speed Racer; Shaft; Maniac Cop; Q; Shaft in Africa; Original Gangstas; Shaft’s Big Score!; Man Friday; Once Upon a Time… When We Were Colored; Future BMT: Boat Trip; Corky Romano; City Heat; Earthquake; Antitrust; Inchon; BMT: Steel; Theodore Rex; Shaft; Notes: There was a Shaft television “show” from 1973-1974 as well which he starred in. In actuality they were seven television movies, which is rather intriguing.)

(That isn’t good. But it released internationally on Netflix which was probably worth a few million … I don’t know, I’m not in the business. I guess I’m saying this probably lost money, but just not that much.)

Rotten Tomatoes – 32% (38/119): Decades removed from the original, this multi-generational Shaft struggles to keep its characters interesting — or anything other than uncomfortably outdated.

(“Uncomfortably outdated”. That right there is 100% the reason we are watching this film. I am very intrigued by the reactions people have had to this film, it is all over the place. Reviewer Highlight: Ultimately, the only truly retro thing about this weirdly reactionary potboiler is its politics. – Keith Watson, Slate Magazine)

Poster – One Bad Mothersklogger (B) 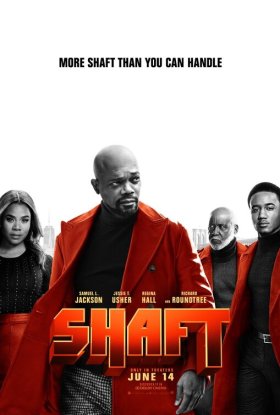 (I like how artistic it is down the font and coloring. A little weird that they are apparently introducing a new generation of shaft but he’s pushed all the way off to the side. I also deduct it some points for an inordinate amount of whitespace. Looks odd.)

(I do appreciate a dick joke, particularly when used to advertise a multimillion dollar product. Really elevating the medium of dick jokes. Otherwise it is fine… better than average.)

(Nothing super big pops out in the graph, but the keyword kind of tickled me. I did it for Rambo as well, but not with the new expanded keywords section. Shocking that there are only eight examples. You can’t even make a cycle yet, but you are actually shockingly close if the Transitions and Chain Reaction films lined up.)

Notes – There is only a 6 year age difference between Richard Roundtree (Shaft I) and Samuel L. Jackson (Shaft II). This is humorously acknowledged in the film when Roundtree rhetorically asks, “How come you look 20 years older than my gray ass?”

This film will be released on Netflix streaming services internationally.

At one point in the film Samuel L. Jackson tells his son that he got a real Super Bowl ring from L.T., referring to former NFL player Lawrence Taylor. This is also likely a reference to the previous Shaft (2000) in which Taylor appeared, although he was not playing himself but an actual character in the film.

At the time of the film’s release the main three actors ages are as follows: Roundtree 76, Jackson 70, and Usher 27.

In 2019, as the trailer made clear, all three generations of the family members named John Shaft exist in the Warner Bros-New Line Cinema-Netflix sequel confusingly also entitled “Shaft”. Further to add confusion, with three lead characters sharing the same name, from the original MGM version, the family tree relationships are broken down as; Richard Rountree as (uncle/great-uncle) John Shaft, Samuel L Jackson as (nephew/father) John Shaft (Senior/II from RR version), and Usher as (great-nephew/son) John Shaft (Junior/II from SLJ version/III from RR version).