Having trailed her through the hallways of the school, Rich looks on curiously as Adrestia attempts to pick the lock to the principal’s office. *Ahem* he coughs and she whirls, locked and loaded and ready for a fight. Seeing who it is, though, she lifts a finger to quiet him and nods towards the now open door. Once inside the office she sticks her hand out, “I guess we can drop the ruse. Det. Adrestia at your service.” Rich is confused. “I’ve been working undercover here for the last year,” she explains, “trying to track down a rogue cop deemed the Four-Finger Fellow cause he always takes the pinkie fingers of his victims as souvenirs.” “Gross,” thinks Rich, but he’s also curious. Could Halloway be this rogue cop? Or maybe Adrestia is lying like a big ol’ liar. Only one way to find out. “Let’s join forces for justice,” he says, mustering all his natural charisma and charm. She hesitates. Rich without Poe is one cop short of an action-packed team. But two heads are better than one and she finally relents, “but only because I’ve yet to figure out where to find the final piece to the puzzle… The Devil’s Key.” Rich gasps. “But that’s only a legend,” he whispers shakily. But Adrestia shakes her head. It’s real. A device capable of revealing all the undercover cops in the world, corrupt or otherwise. “With such power comes great responsibility,” warns Rich, coining a wholly original phrase. But Adrestia insists it’s the only way to find the information she needs. Rich nods, knowing that if it comes to it he’ll have to destroy the key or take down Adrestia trying. Suddenly a red dot sight appears on Rich’s chest and Adrestia’s eyes widen in horror. That’s right! We’re doing it. The shelter in place BMT Live! Given where the film’s reviews landed we were primed and ready to watch Bloodshot in theaters for BMT. But then the virus hit and we sadly thought our chance was gone. Wrong! That’s because they released this mofo streaming. Ready or not, Vinny D, cause here we come. Let’s go! 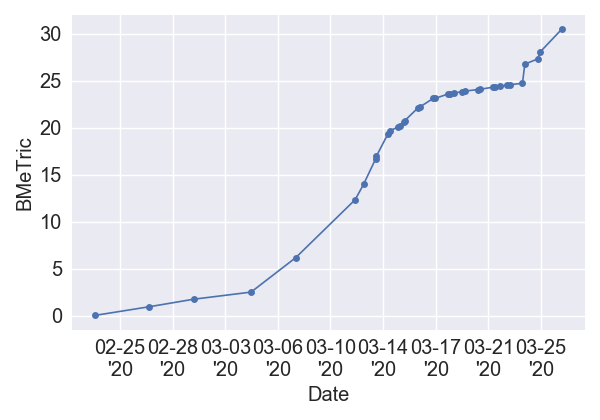 (That’s a fun graph. It was only in theaters for about a week. And then in a day or two of online release it managed to double the vote count. I would actually guess that you could estimate the total online gross pretty well by just tracking that graph and doing a little back of the envelope calculation. The Notability is very small, which makes a bit of sense when you look at the budget. Notability probably scales pretty well with budget.)

RogerEbert.com – 1.5 stars – Vin Diesel fans who can’t wait for the next installment of the “Fast and Furious” macho soap opera series can get their fix at “Bloodshot,” a comic book adaptation that’s as big a stickler about “family” yet far less satisfying than even the worst films of the “Fast” franchise. The family in question here is the wife of Ray Garrison (Diesel), who is put in danger by her spouse’s mercenary soldiering. Now, if you want to walk into director Dave Wilson’s sci-fi actioner as blindly as I did, exit this review now. If you desire a hint of what you’re in for, let me leave you with a few phrases you would have encountered had you stuck around: “Universal Soldier,” “robotic cucarachas,” “needle drop abuse of the Talking Heads” and “blatant rip-off.”

(Oooooooo spoiler alerts in the review. Yes please. I don’t really go for spoiler warnings usually, but you know what? I don’t know anything about this movie so I’m going to give going in blind a shot.)

(Ah I get it … it actually is a superhero movie. The bad guy looks like a cross between Doc Ock and Vulture from Spiderman basically. So … that’s going to be terrible. I can’t wait.)

Writers – Jeff Wadlow (screenplay by & story by) – (Future BMT: Prey; Fantasy Island; Cry Wolf; True Memoirs of an International Assassin; Kick-Ass 2; BMT: Truth or Dare; Bloodshot; Notes: Nephew of Katie Couric, who interviewed him on Today at one point. Has produced a few television shows such as The Strain.)

Eric Heisserer (screenplay by) – (Known For: Bird Box; Arrival; Lights Out; Final Destination 5; Hours; Future BMT: A Nightmare on Elm Street; Extinction; The Thing; BMT: Bloodshot; Notes: Nominated for an Oscar for Arrival. Married to Christine Boylan who is herself an accomplished television writer and producer of things like The Punisher.)

Sam Heughan – (Known For: The Spy Who Dumped Me; BMT: Bloodshot; Notes: Scottish, he’s one of the stars of the show Outlander.)

(This is going to look a little odd since it only managed to get out to theaters for a short run. It was probably going to mostly be unsuccessful regardless, but the low budget of $45 million probably means it’ll ultimately be a wash for the most part.)

Rotten Tomatoes – 30% (39/132): Bloodshot gives Vin Diesel a solid opportunity to indulge in old-school action that should satisfy fans, even if the end result is disappointingly mediocre.

(Oooof. As a not-huge fan of Diesel, whose acting often leaves a lot to be desired, that isn’t too promising. Sounds like Vin Diesel: The Movie (again … for like the fifth time). Reviewer Highlight: By the time our man/machine finds himself in the time-honored pickle of dangling by one hand from a ledge 50 stories above the ground, Bloodshot has already given us an action movie hangover. – Richard Roeper, Chicago Sun-Times)

(Gotta be honest, despite kinda looking lame I also kinda dig this poster. Nice strong red color, font has a bit of flair with the classic Bloodshot symbol incorporated, and it’s doing its job… of telling you that Vin Diesel is in the film. Patrick’s Shallow Fake: I think this is probably the best one I’ve done yet, and it only took like an hour and a half. I am preeeeeetty impressed with myself.)

(This has merits, but it’s a bit too bland and generic. It really could be the tagline for any number of films with heroes with dark pasts… I mean, even something like, say, The Glimmer Man. But it’s still got flow and it’s mildly clever. Just generic.) 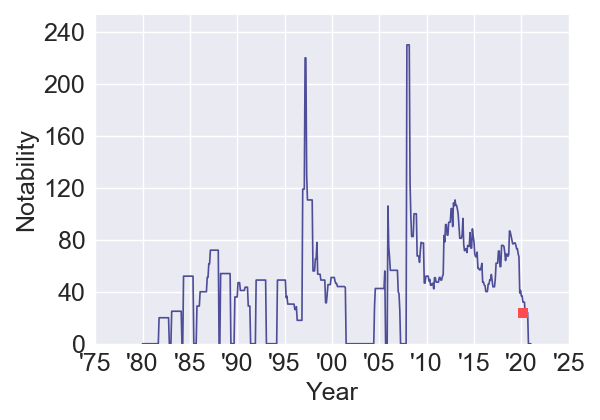 (Honestly the only one of those I’m looking forward to is Supergirl which is a classic bad movie. That dip in the 2000s is quite interesting. It seems plausibly like an oversight as that was right when things like Spider-man 2 was coming out. Could also just be that some comic book films (like Batman) don’t qualify and the gritty “real” ones became popular for a split second before Marvel broke everything wide open. Both seem realistic.)

Notes – Bloodshot is one of the most popular characters in the 80 million comics selling Valiant Universe. Bloodshot has sold over 7 million comics in all languages. Bloodshot #1 was a much anticipated comic that became a best selling issue and has gone on to sell approximately 1 million copies. Bloodshot #1 was awarded “Best Comic” by Diamond Distributors (the American comics industry’s leading distributor) and “Best Innovation” for its chromium cover (the first of its kind). (So its got that comics cred, got it)

First film based on Valiant Comics. (Oh wow, I wouldn’t have guessed that actually, but it makes sense. I would have thoughts there would have been some trash made in the late 2000s)

Just like other films released around the same time as this one, Bloodshot suffered a bad opening weekend at the box office due to the global pandemic, the coronavirus. Though the opening was never projected to be large, it is said it still suffered millions in losses both domestically and especially worldwide. (Oh yeah, I forgot about COVID-19 …)

This is the second comic-book role for Vin Diesel (after playing Groot in the Marvel Cinematic Universe), Guy Pearce (after Iron Man Three (2013)), Eiza González (after Alita: Battle Angel (2019)), Sam Heughan (after Lego DC Super-Villains (2018)), and Talulah Riley (after Thor: The Dark World (2013)). (Yeah, turns out a lot of people do comic book movies now)

Vin Diesel and Eliza Gonzalez have both appeared in films from “The Fast and the Furious” franchise. Diesel starred in 8 films and Gonzalez appeared in the 2019 spin-off “Fast and Furious Presents: Hobbs and Shaw”. (Whaaaa that’s pretty funny)