I know what all of our faithful readers are thinking and it rhymes with Geostorm, but slow your roll. At the time that we had to choose the films for this week we just didn’t know what the reviews for Geostorm would be like… … … OK, so we did pretty much knew what the reviews for Geostrom would be like, but we couldn’t risk it getting “good for what it is” bullshit reviews that propelled it to 41% on RT. So this week we stayed the course and moved to our Games category where we aimed to get a Mockbuster friend to tag along. A Mockbuster is a film released with a similar title and concept to a major blockbuster hoping to ride the hype to minor profits. In the end there was only one Mockbuster that would do. That’s right! We’re watching TransmorFirst Daughter! Transmorphers is obviously a play off of Transformers and makes me sad to even think about… should be excruciating. As for First Daughter, the Katie Holmes vehicle is both on the Calendar and is an abstract part of the Periodic Table of Smellements (for #1). An unexpectedly important film in the BMTverse. Let’s go! 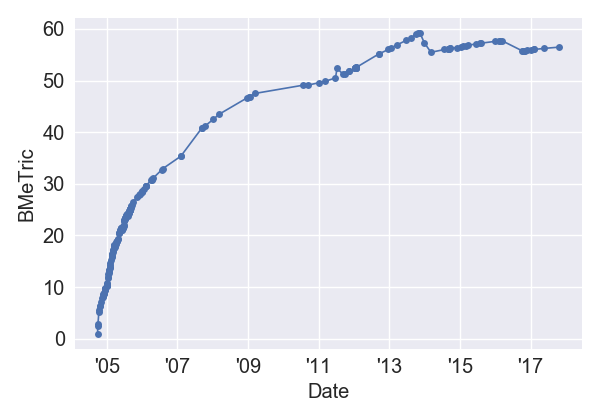 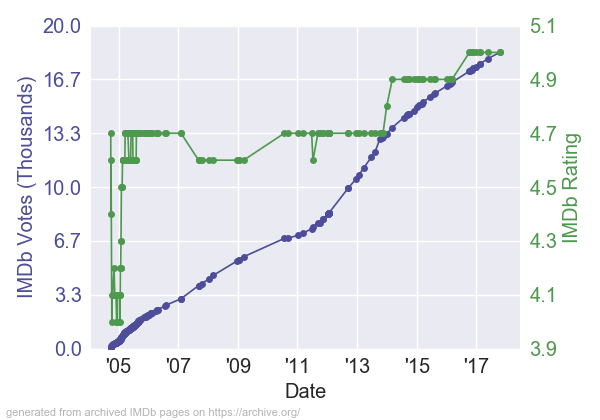 (Sub-5.0 is a brutal IMDb score, but that isn’t a surprise, the film has brutal reviews. Other than that you have the regression to the mean and 2011 inflection, but not much else interesting. In other world, these plots take after this movie (boom).)

Leonard Maltin – 1.5 stars –  Fairy-tale romance for wholesome teens centers on the sheltered daughter of the U.S. President who goes off to college to get away from her omnipresent Secret Service detail and falls for a hunky student whose true identity holds a big surprise (not really). Chasing Liberty was bad enough; did we really need another formulaic, juvenile variation of Roman Holiday the same year?

(The answer to the last question is no. I’ve never seen Roman Holiday (I know, a travesty, I have too little experience with film prior to 1980 I admit), but maybe I’ll check it out now. How can I properly assess this purported retelling if I never experienced the original telling?)

(That looks … generic. Honestly they kind of give away the twist hinted at by Leonard Maltin … just look at what Marc Blucas is wearing in certain scenes and you’ll get it. The soundtrack for this trailer is also bonkers.)

Writers – Jessica Bendinger (story & screenplay) – (Known For: Bring It On; Aquamarine; Future BMT: The Truth About Charlie; Stick It; BMT: First Daughter; Notes: A former model turned novelist turned screenwriter/director. She hasn’t done much after her directorial debut Stick It, but she certainly had a burst of success in the mid-2000s.)

Jerry O’Connell (story) – (BMT: First Daughter; Notes: Yuuup, that Jerry O’Connell. Derisively known as the fat kid from Stand By Me, he ultimately had a very successful career in film. He is currently married to Rebecca Romijn with whom he has twin daughters. We. Love. Twin stories. Especially because Jerry O’Connell seems like a cool cat.)

Kate Kondell (screenplay) – (Future BMT: Legally Blonde 2: Red, White & Blonde; BMT: First Daughter; Notes: There isn’t much about her, but she’s written multiple pixie / fairy direct-to-video films including the Tinkerbell pirate fairy film I remember seeing a million advertisements for at one point in my life.)

Actors – Katie Holmes – (Known For: Logan Lucky; Batman Begins; Phone Booth; Woman in Gold; The Gift; Don’t Be Afraid of the Dark; Go; Thank You for Smoking; The Ice Storm; Wonder Boys; The Unbeatables; Pieces of April; Muppets from Space; Touched with Fire; The Extra Man; Future BMT: The Son of No One; Teaching Mrs. Tingle; Abandon; The Romantics; Disturbing Behavior; Mad Money; The Singing Detective; Miss Meadows; The Giver; Days and Nights; All We Had; BMT: Jack and Jill; First Daughter; Razzie Notes: Won for Worst Screen Couple for Jack and Jill in 2012; and Nominated for Worst Supporting Actress in 2006 for Batman Begins; and in 2012 for Jack and Jill; Notes: Most famous for her role in Dawson’s Creek. She subsequently became famous after marrying (and divorcing) Tom Cruise. She’s worked steadily throughout her career and is in the cast of the upcoming Ocean’s Eight.)

Marc Blucas – (Known For: Brawl in Cell Block 99; Sleeping with Other People; We Were Soldiers; Knight and Day; Jay and Silent Bob Strike Back; Pleasantville; Red State; The Jane Austen Book Club; I Capture the Castle; Mother and Child; Sunshine State; Prey for Rock & Roll; Future BMT: Meet Dave; They; Summer Catch; View from the Top; Eddie; Thr3e; Stay Cool; The Alamo; The Mating Habits of the Earthbound Human; BMT: First Daughter; Notes: Most well known for having a super fake sounding name. He’s had moderate success in television most recently, and will be in a new Nic Cage film coming out next year, exciting stuff.)

(Disaster. If you look at the notes there is a whole thing about moving the release because Chasing Liberty flopped so hard … didn’t help.)

#26 for the President genre 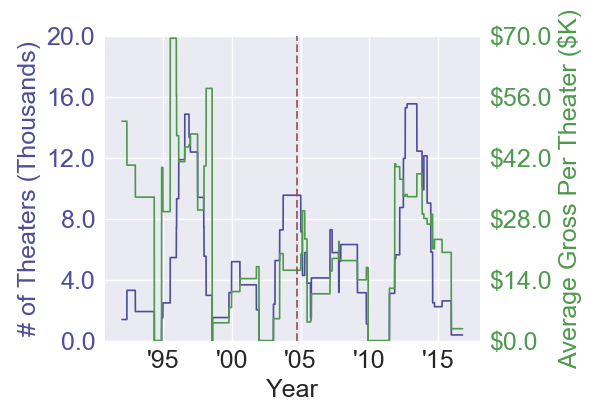 (The thing I think I like the most about this genre is that is really is a recent phenomenon. There is a kind of Blockbuster aspect to representing Presidents and speculating about their lives. And this is despite that fact that political cartoons have been skewering presidenting for literally hundreds of years! We love fake presidents (so much we once considered a whole mini-game concerning it), so it is great to see Keaton put on the suit and try out the role.)

#260 for the Romantic Comedy genre 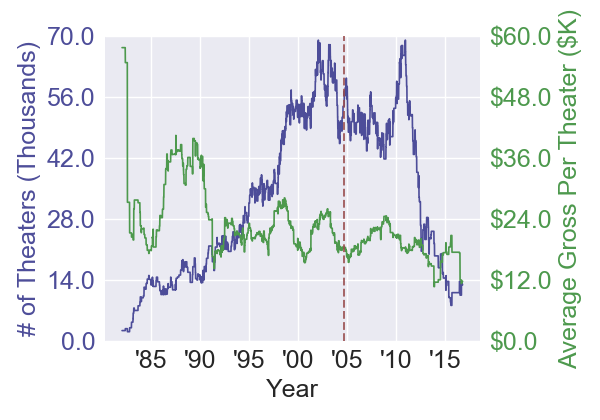 (Why do I remember speculating about this … anyways, comes right in the long plateau of a peak for the genre which has had a rather sudden downturn. I probably guessed this last time, but: romantic comedies aren’t tentpoles and are simply getting less screens I think in the new franchise era. Probably doesn’t help that of all film types this one might actually benefit the least from the big screen experience. VOD here we come!)

#47 for the Teen Romance genre 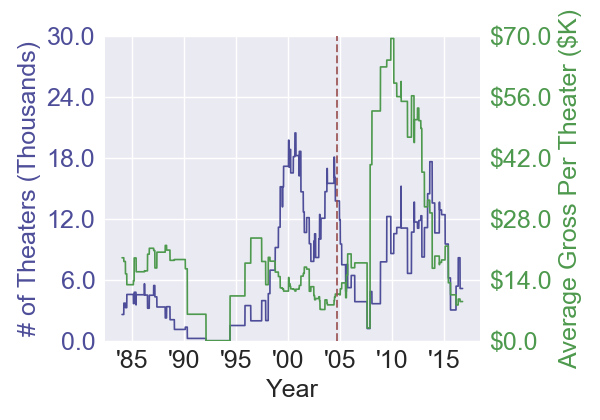 (Just below Here on Earth (be still my beating heart!). That giant peak? You guessed it, the Twilight Saga. The John Hughes era of the 80s were the heyday, but the late 90s saw a small resurgence. With The Fault in Our Stars and other YA novels starting to find an audience it is possible we might be entering a new post-Twilight bump as well. We’ll see.)

Rotten Tomatoes – 8% (7/85): First Daughter is a bland and charmless fairy tale that fails to rise above the formula.

(Wow. Sub-10% is nuts, and I’m stunned a film like this gets a coveted position like that. Especially when the consensus might as well be: Blah. I’m getting intrigued.) 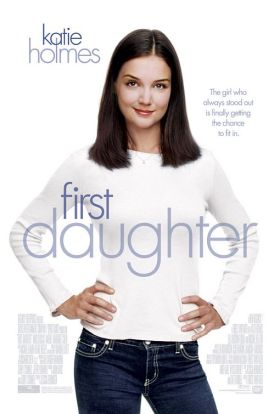 (Gah! I’m blind! Why is this poster sooooo white? Jesus. It’s also just a poster for Katie Holmes: The Movie… there is nothing First Daughter in this at all. Font is shit too. Boooo. Not an F because it doesn’t actually hurt my brain, only my eyes.)

Tagline(s) – The girl who always stood out is finally getting the chance to fit in. (B)

(I like the effort and the construction. Just too long and still doesn’t work in the whole “daughter of the president” thing.)

(Top one is fake, but this does remind me we need to watch Teen Wolf Too at some points. Probably the only one that I really want to see from that list.)

Notes – Vera Wang designed all of Katie Holmes’ ballgowns for this film. (Her originals usually retail for over $10,000 each.) (That last bit is not a comment by us, the parentheses are in the IMDb notes. No comment otherwise)

The release date for the film was pushed back after the similarly themed Chasing Liberty (2004) flopped at the box office. (Ha! I think I’ve seen that one at one point …)

The movie James and Samantha are watching in the movie theater is The Girl Can’t Help It (1956). Director Forest Whitaker was originally set to direct a remake of the 1956 comedy after the release of “First Daughter”.

This film is dedicated to Michael Kamen, the film’s composer.

The book Katie Holmes is reading in the library is Hermann Hesse’s ‘Siddhartha’. (It’s on the BMT Not-Necessarily-Bad Book List!)

In the scene where Katie Holmes and Ameriie are sliding down the slope on the slip-n-slide, Katie Holmes inadvertently pulled down Aneriie’s sweatpants while struggling to climb over the hay bales, exposing Ameriie’s bottom in view of the camera. The director chose to leave this in the final cut of the film, since it was a spontaneous event and quite in line with the carefree nature of the scene. (The director being Forest fucking Whitaker)