Alright, well for all our faithful fans who were worried about the treacherous route we took through the Chain Reaction this year this is the main event. Last cycle we sunk all the way back to 1983 for Jaws 3-D and now we pop back 34 years later to the Dennis Quaid sad-fest A Dog’s Purpose. Probably not at the front of everyone’s mind when it comes to 2017 BMT films, but it is a qualifier and set us up nicely for next year’s chain. It also was for a brief time the most hated film in America when it was alleged that the film engaged in animal cruelty on set. This was ultimately proved incorrect, but it was enough to get the US premiere cancelled. Then everyone forgot about it. I cannot wait to bawl my eyes out watching a dog die over and over again. Sound like a blast. Let’s go! 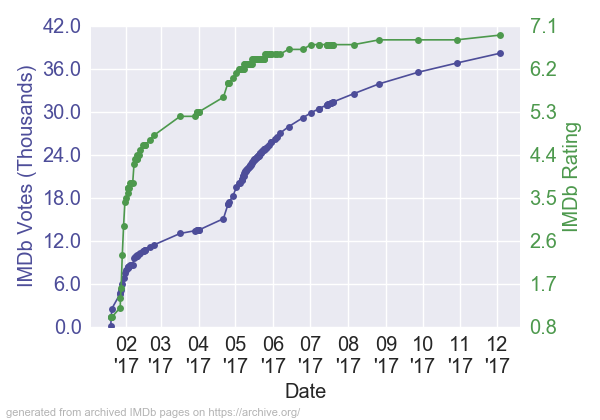 (I straight up have never seen anything like this before. You can even see that the rating started at literally 1.0, everyone gave it a one. There were actually several days in which the rating was 1.0, but then they shut the page down again because people were piling on (I assume). It then makes its long slow trek to 7.0! This could be the highest rated film we’ve ever done (it isn’t, but it is darn close). Truly bizarre.)

RogerEbert.com – 1.5 stars –  This movie has its moments—no movie with such an adorable array of pooches could not, plus Mr. Quaid, who in addition to being movie-star handsome is also a pretty good actor, sells his fifteen or so onscreen minutes. But the tonal weirdness and the philosophical fallacies and the general level of treacle did not sit very well with me. Then again, I have to admit I’m really more of a cat person

(The reviews for this film as obviously off because they were made literally days … weeks? after the abuse scandal broke. There is a question of whether any abuse happened in the end. But I’m sure I’ll have the same reaction: a little sickly sweet, but overall okay … if I didn’t have my doubts about the intentions of the film. I am much more of a dog person though, so …)

(I just got diabetes from that trailer. Sickly sweet. And I know I’m going to cry too. I’m not going to like this one at all.)

Directors – Lasse Hallström – (Known For: Hachi: A Dog’s Tale; What’s Eating Gilbert Grape; Chocolat; The Hundred-Foot Journey; Casanova; The Cider House Rules; Salmon Fishing in the Yemen; An Unfinished Life; The Shipping News; My Life as a Dog; The Hoax; Once Around; Future BMT: Something to Talk About; Dear John; BMT: Safe Haven; A Dog’s Purpose; Notes: Swedish. Was nominated for Best Director in 1988, notable as the first time the Best Director category was all non-Americans.)

Writers – W. Bruce Cameron (screenplay & based on the novel by) – (BMT: A Dog’s Purpose; Notes: The writer of the original book. He is in the process of adapting the sequel as well, A Dog’s Way Home.)

Cathryn Michon (screenplay) – (BMT: A Dog’s Purpose; Notes: Has been working with Cameron for his last few movies (Cook Off! and Muffin Top: A Musical). Prior to that she worked mostly on television, so possibly she met him when he worked on 8 Simple Rules.)

Audrey Wells (screenplay) – (Known For: Under the Tuscan Sun; George of the Jungle; The Kid; Shall We Dance; The Truth About Cats & Dogs; Guinevere; Future BMT: The Game Plan; BMT: A Dog’s Purpose; Notes: Seems to be a Kids’ Film and Romantic Comedy writer. She also directed Under the Tuscan Sun, which was her only major directorial effort.)

Maya Forbes and Wallace Wolodarsky (screenplay) – (Known For: Monsters vs. Aliens; Diary of a Wimpy Kid: Dog Days; Infinitely Polar Bear; The Rocker; The Polka King; Future BMT: Seeing Other People; BMT: A Dog’s Purpose; Notes: You knew there had to be a writing team when there are five writers attached. Wolodarsky producer and wrote for the Simpsons. Forbes produced and wrote for The Larry Sanders Show.)

Actors – Josh Gad – (Known For: Murder on the Orient Express; Beauty and the Beast; Frozen; Marshall; Angry Birds; Love & Other Drugs; Thanks for Sharing; The Rocker; Wish I Was Here; Future BMT: Marmaduke; The Internship; Ice Age: Continental Drift; 21; Crossing Over; BMT: Pixels; Jobs; The Wedding Ringer; A Dog’s Purpose; Razzie Notes: Nominated for Worst Supporting Actor in 2016 for Pixels, and The Wedding Ringer; Notes: Probably in the news recently because of the 25 minute long “short” starring Olaf the snowman that was playing in front of Coco. Also was the star of The Book of Mormon in its original Broadway run in 2011.)

Dennis Quaid – (Known For: The Parent Trap; The Day After Tomorrow; Stripes; The Right Stuff; Traffic; Footloose; The Rookie; Innerspace; Any Given Sunday; Soul Surfer; DragonHeart; Wyatt Earp; Frequency; Enemy Mine; Breaking Away; Dreamscape; Truth; Far from Heaven; Postcards from the Edge; Suspect; Future BMT: Legion; Cold Creek Manor; Yours, Mine & Ours; Beneath the Darkness; G.I. Joe: The Rise of Cobra; Horsemen; Something to Talk About; Flight of the Phoenix; The Alamo; Caveman; Undercover Blues; Vantage Point; Switchback; Wilder Napalm; Pandorum; All Night Long; BMT: Jaws 3-D; Movie 43; What to Expect When You’re Expecting; Playing for Keeps; A Dog’s Purpose; Notes: Has a band called The Sharks, is a five-handicap golfer, and has a pilot’s license. This video makes his band seem … well, I’m sure they have their fans.)

Peggy Lipton – (Known For: Twin Peaks: Fire Walk with Me; I’m Gonna Git You Sucka; True Identity; Future BMT: The Postman; Kinjite: Forbidden Subjects; BMT: When in Rome; A Dog’s Purpose; Notes: She was in the original and recent revival of Twin Peaks. Is the mother of Rashida Jones as well, who played Ann Perkins in Parks and Recreation.)

(Despite the controversy this was a giant success … how strange. For whatever reason I thought this completely bombed after it was torn apart for allegedly abusing dogs. It is weird to think that this would have been a much bigger deal only a year later. It this happened now this shit wouldn’t have even made it to theaters I think.)

#18 for the Controversy genre

(There were a few from this year here as well, the funniest being The Great Wall for “white-washing”. Controversy films make a chunk of change it turns out. I don’t want to say “outrage culture”, but they’ve gotten a lot more popular since 2000 … just saying.)

(Everyone loves doggies! Well … they like them less since 2010 it seems. Do you know which dog movie came out in 2010? That’s right, Marmaduke. Coincidence? Yuuuuuuup. Anyways, this comes in around 102 Dalmatians, which kind of tells you all you need to know.)

(I will almost certainly be crying during this film. If not, then it has failed because I’m a softy. Hopefully it won’t pull at my heartstrings any harder than Bing Bong did in Inside Out… I might melt.) 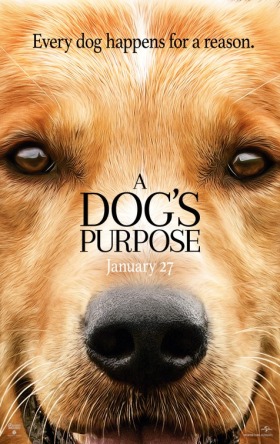 (Obviously great color and unique framing. Terrible font. Really bad choice. But otherwise I like what they decided to do here. Tells me everything I need to know.)

(Every dog happens… every dog… happens. Huh, that is really not rolling off the tongue. It’s short and gets at the idea of the film, but not super clever and weird phrasing. It seems like they should have been able to do better.)

(Give me a little Fluuuuuuke … wait? No Fluke? I guess not that many people watched Fluke. Fair, but I think the story will have some passing similarities, so I’m still glad I watched Fluuuuuuke.)

Notes – Prior to theatrical release, controversy arose when behind-the-scenes footage surfaced and appeared to show a distressed dog being forcibly submerged into turbulent pool water during filming. As a result of the leaked footage, the filmmakers chose to cancel the U.S. premiere. However, it was announced on February 4, 2017 by the American Humane Association that the footage was misleadingly edited and no abuse had taken place. (I totally forgot about that. Wow.)

Bradley Cooper was originally slated to provide the voice of the titular dog; however, he was ultimately replaced with Josh Gad. (I love this fact. Would it have been the same script?… seems like wildly different choices).

The Maya segment of the film differs from the events in the book. In the book, Maya is a K9 officer who takes over handling Ellie after her first handler Jakob (Carlos in the film) is shot and injured by a kidnapper. In the movie, it is Ellie who is shot – fatally – by the kidnapper, then reincarnated as Tino the Corgi and adopted by Maya, a college student. (Damn, I forgot this was based on a book. I don’t think either of us will end up reading it. Are we losing our edge?).

Dennis Quaid plays adult Ethan, who was once starting quarterback with a full scholarship but was injured. In Everybody’s All-American (1988), Quaid played a star high school quarterback no longer playing. In Any Given Sunday (1999) he played a quarterback past his prime trying to relive his days. (We get it, Dennis Quaid. You love sports).