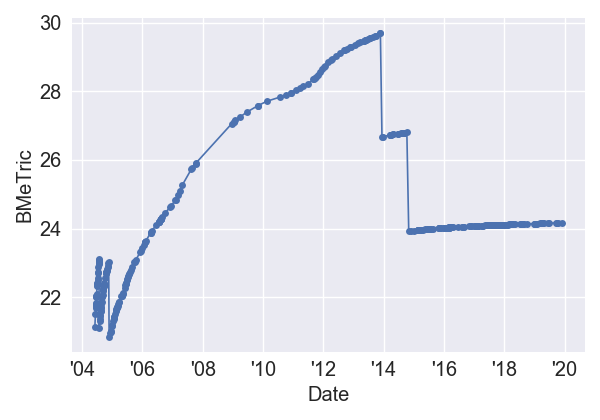 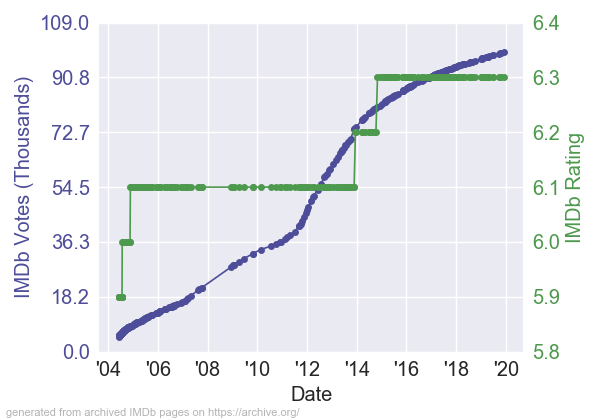 RogerEbert.com – 2.0 stars – “Paycheck” begins with a thought-provoking idea from Philip K. Dick, exploits it for its action and plot potential, but never really develops it. By the end, the film seems to have lost enthusiasm for itself and should be scored with “Is That All There Is?” It’s like an assembly of off-the-shelf parts from techno-thrillers: the vast laboratory, the cold-blooded billionaire industrialist, the hero in a situation that he doesn’t understand, the professional security men who line up to get bumped off by the amateur computer nerd. Because the director is John Woo, we expect a chase and a martial-arts sequence, and we get them, but they’re strangely detached; they feel like exercises, not exuberations.

Actors – Ben Affleck – (Known For: Justice League; Gone Girl; Jay and Silent Bob Reboot; The Town; Triple Frontier; Good Will Hunting; Dazed and Confused; The Accountant; Argo; He’s Just Not That Into You; Shakespeare in Love; State of Play; Dogma; The Sum of All Fears; Daredevil; Jay and Silent Bob Strike Back; Field of Dreams; School Ties; Mallrats; Chasing Amy; Future BMT: Surviving Christmas; Buffy the Vampire Slayer; Reindeer Games; Suicide Squad; Man About Town; Pearl Harbor; The Third Wheel; 200 Cigarettes; Live by Night; Batman v Superman: Dawn of Justice; Smokin’ Aces; BMT: Gigli; Runner Runner; Phantoms; Paycheck; Armageddon; Razzie Notes: Winner for Worst Actor in 2004 for Daredevil, Gigli, and Paycheck; Winner for Worst Screen Combo for Batman v Superman: Dawn of Justice in 2017; Winner for Worst Screen Couple for Gigli in 2004; Nominee for Worst Actor in 2002 for Pearl Harbor; in 2005 for Jersey Girl, and Surviving Christmas; and in 2017 for Batman v Superman: Dawn of Justice; Nominee for Worst Actor of the Decade in 2010 for Daredevil, Gigli, Jersey Girl, Paycheck, Pearl Harbor, and Surviving Christmas; and Nominee for Worst Screen Couple in 1999 for Armageddon; in 2002 for Pearl Harbor; and in 2005 for Jersey Girl;)

Aaron Eckhart – (Known For: Midway; The Dark Knight; Olympus Has Fallen; Erin Brockovich; Sully: Miracle on the Hudson; The Missing; Thank You for Smoking; No Reservations; Any Given Sunday; Bleed for This; The Core; The Pledge; Rabbit Hole; Conversations with Other Women; In the Company of Men; Possession; Nothing Is Private; Nurse Betty; Your Friends & Neighbors; Future BMT: The Black Dahlia; Incarnate; Love Happens; Suspect Zero; Erased; Bill; Molly; Neverwas; BMT: The Wicker Man; I, Frankenstein; Battle Los Angeles; London Has Fallen; Paycheck;)

Uma Thurman – (Known For: Pulp Fiction; Kill Bill: Vol. 1; Nymphomaniac: Vol. I; The House That Jack Built; Percy Jackson & the Lightning Thief; Kill Bill: Vol. 2; Gattaca; Dangerous Liaisons; The Adventures of Baron Munchausen; Nausicaä of the Valley of the Wind; Beautiful Girls; The Producers; Down a Dark Hall; Henry & June; Les Misérables; My Super Ex-Girlfriend; Prime; Mad Dog and Glory; Final Analysis; Sweet and Lowdown; Future BMT: Even Cowgirls Get the Blues; Johnny Be Good; Bel Ami; The Con Is On; Motherhood; The Accidental Husband; Chelsea Walls; Jennifer Eight; The Life Before Her Eyes; Burnt; Vatel; BMT: Batman & Robin; The Avengers; Movie 43; Be Cool; Playing for Keeps; Paycheck; Razzie Notes: Nominee for Worst Actress, and Worst Screen Couple for The Avengers in 1999; Nominee for Worst Actress for Even Cowgirls Get the Blues in 1995; and Nominee for Worst Supporting Actress for Batman & Robin in 1998;)

Rotten Tomatoes – 27% (42/156): Though Dick’s short story has an intriguing premise, Woo reduces it to a lot of meaningless chases, shoot-outs, and explosions. 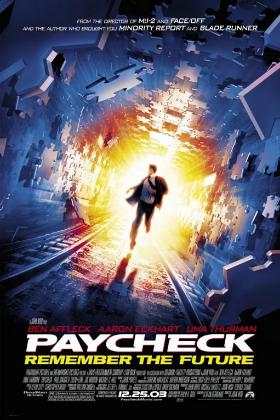 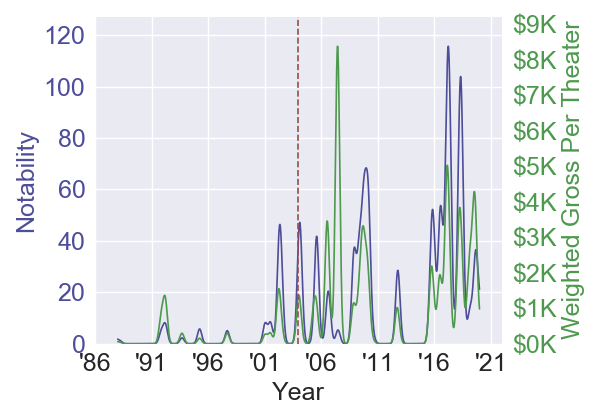 Notes – Jennings (Ben Affleck) was supposed to be a New York Mets fan (or Yankees, sources differ), but Affleck, a Boston Red Sox fan, persuaded Director John Woo to change the team to the Red Sox.

In the original story (“Paycheck” by Philip K. Dick) Jennings sends to himself very different items, and there were only seven of them. They were: “A code key. A ticket stub. A parcel receipt. A length of fine wire. Half a poker chip, broken across. A green strip of cloth. A bus token.”

John Woo originally did not want to do his trademark “Mexican Standoff” in this film, but Ben Affleck begged Woo to include the scene, having been a big fan of Woo’s films The Killer (1989) and Hard Boiled (1992).

Matt Damon was originally considered for the part of Michael Jennings, but turned it down, because it was too similar to The Bourne Identity (2002).

Among the alternate features in the DVD, is the final, wherein after Michael and Rachel get away, they pass by a pawn shop, and Michael sees the ring that the kid took off him on the bus. He gets it, and gives it to Rachel.

In the DVD special feature about the film’s stunts, Stunt Coordinator Gregg Smrz explains that in a chase-scene crash between a car and a big rig truck, the truck was actually towing the car by use of a cable system that the special effects department fabricated. One of the chains connecting the two vehicles is noticeable during this crash sequence in the film.

In the “Making of” featurette on the DVD, John Woo says that the visual similarities in the lead character to Roger Thornhill from Alfred Hitchcock’s North by Northwest (1959), as well as similarities in chase scenes, et cetera, are there on purpose.