Alright, so for the week of Christmas Patrick and I wanted to give all our loyal readers a real treat. That’s right! Ridiculous Six! I’m sure all of you were gnashing your teeth waiting to find out whether BMT would in fact watch Ridiculous Six. On one hand it is a terribly reviewed film starring Adam Sandler. What more could we ask for? On the other it did not release to theaters as it was part of Sandler’s new deal with Netflix. Usually this is a near-automatic disqualification. In the end our BMeTric told us that this was not a film to miss so we decided to watch it. Without further ado: Ridiculous Six. Let’s go! 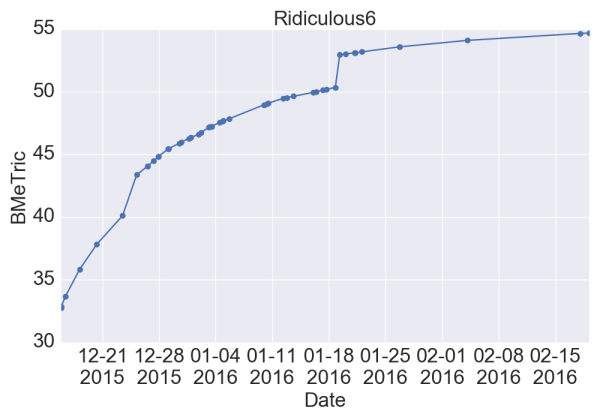 (This was rather high considering it has been out on Netflix for only 20 days or so, and now it has entered rarefied air, a 50+ BMeTric. It should probably stay around here, without a DVD release it does seem to be plateauing. Note: plot generated February 18, 2016).

RogerEbert.com – 0.5 stars – Little did I know how bad it would be. The combined –isms of a script in which a Native American character is named “Beaver Breath” are overwhelmingly unfunny enough, but it’s really only one aspect of the monumental failure on display in a film that is almost bafflingly bad.

(Bafflingly bad is all we can hope for. Like Ghosts of Mars, Silent Hill 2, or Color of Night. Simple bafflement on what we are seeing on the screen.)

(That is incomprehensible. Methinks they give no indication of a plot in the trailer because the movie in fact does not have one.)

Writer(s) – Tim Herlihy – (Known For: Big Daddy; Happy Gilmore; The Wedding Singer; Billy Madison; BMT: Just Go with It (seen it); The Waterboy (seen it); Mr. Deeds (seen it); Grown Ups 2 (seen it); Little Nicky (seen it); Bedtime Stories; Pixels (Seen it); The Ridiculous 6; Notes: Can complete his BMT filmography with Bedtime Stories. He was the college roommate of Adam Sandler and had a perfect LSAT score according to IMDB. Nominated for Worst Screenplay: Grown Ups 2 (2013), Little Nicky (2000), Big Daddy (1999))

(Yup, released directly as a Netflix original. This caused massive confusion in the Razzie circles (fine, it was like three people) because you need to have a release to qualify for the awards, similar to the rule with the Oscars. Indeed, Ridiculous Six was not nominated for a single award.)

Rotten Tomatoes: 0% (0/25), Every bit as lazily offensive as its cast and concept would suggest, The Ridiculous Six is standard couch fare for Adam Sandler fanatics and must-avoid viewing for film enthusiasts of every other persuasion.

(Rough. But also confusing. The fact that this only garnered 25 reviews is weird to me. It is so easy to access you would think blogs and newspapers would be falling all over themselves to write some snarky review about the first terrible Netflix original. If I was a one to suggest conspiracy I would say this smacks to strong-arming by those who dislike the VOD model.) 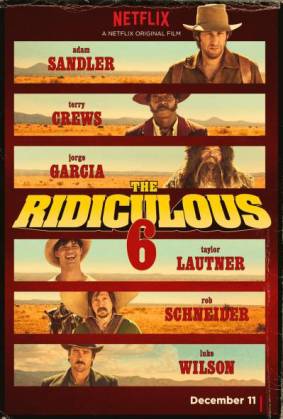 (I kind of weirdly like this. The structure is kind of unique (most Seven Samurai based movies go for the horizontal arrangement), I like the color scheme, and it tells you the most important part of this film: we’ve got a fuck ton of people in this. The only issue I have is the weird “age” artifacts (wrinkles at the top, the font, etc.) seem kind of haphazardly added after the fact.)

Notes – In April 2015, it was reported that about a dozen Native American actors and actresses walked off the set over objections to their portrayal in the movie. More specifically, they were allegedly offended by inaccuracies in costumes and character names (such as Beaver’s Breath and No Bra). Netflix responded by saying that the film is a broad satire of Western movies and their stereotypes, and that “[it] has ‘ridiculous’ in the title for a reason”. In the end, the stories turned out to be exaggerated as only four actors out of a group of 150 extras had left the set. (Classic)

The movie was initially to be produced by Sony Pictures, and then Paramount Pictures, but both studios passed on the project. Warner Bros was in an advanced state of negotiations, but after Adam Sandler signed a four-picture deal with Netflix, they also dropped the project. Some of the alleged reasons included Sandler’s recent streak of box office bombs (including That’s My Boy (2012), Blended (2014) and Men, Women & Children (2014)), the box office failure of the similarly Western-themed comedy A Million Ways to Die in the West (2014), as well as fear that Sandler’s Netflix contract would put the movie on hold for too long. Finally, Netflix stepped in and picked up the movie as part of Sandler’s contract. (Huh, didn’t know there was a whole story to this guy. I was just thinking about how weird it was to make this when A Million Ways to Die in the West bombed so badly).

(I’m sorry, I just was cracking up with these IMDB keywords)