This week we continue our athlete-turned-actor cycle with the Chain Reaction category. Last time we watched Around the World in 80 Days, so we have an obvious next step in Conan the Destroyer through Arnold Schwarzenegger. This is the sequel to Conan the Barbarian which we both loved, and a film that appears to be universally abhorred by fans of the original. It notably costars Wilt Chamberlain in his only major motion picture role. It’s pretty much the quintessential athlete-inexplicably-starring-in-a-film film. Greasy Arnold fighting monsters straight out of Krull? Yes please. There’s not much more to say than that. Let’s go!

(This is actually much higher than I expected. I already watched the first film and loved it… how could they really mess the second one up so badly? Seems so easy not to. For some weird reason the rating for this movie has been moving up substantially. I think it, again, has to do with this somehow being popular with kids when growing up … maybe)

(So is it just worse special effects? That seems strange. I wouldn’t even say the special effects were a big reason why I liked the first Conan… it was more the writing and the character… so did they fuck that up? I’m so confused.)

(I wouldn’t say that’s the worst trailer in the world for a Conan film. A few too many sidekicks in this one perhaps. But nothing in there that makes me especially worried… maybe it is that it just looks like shit now.)

Writer(s) – Roy Thomas (story) – (Known For: Fire and Ice BMT: Conan the Destroyer; Notes: Notable in the comic book world for his work at Marvel. Inducted in the Comic Hall of Fame.)

Stanley Mann (screenplay) – (Known For: Eye of the Needle; The Collector; The Mouse That Roared; Circle of Iron; BMT: Conan the Destroyer; Firestarter; Meteor; Tai-Pan; Red Sonja; Notes: Nominated for an Oscar for Screenwriting for the Collector (1965). Died 3 weeks ago at the age of 87.)

(Modest hit. The 14th highest grossing “sword and sorcery” film of all time. The lowest (#31)? In the Name of the King: A Dungeon Siege Tale. As if there was ever a doubt )

(RT is able to do an OK job with this old one. No consensus though, so I’ll make one up. Consensus: Arnold is so greasy and muscled and his muscles are so greasy and sexy… what was I talking about? ) 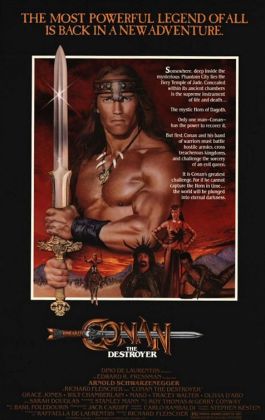 (Meh. Similar to the first one. Pretty good, all things considered. I wish IMDb listed that full paragraph on the poster as a tagline.)

(I like this quite a bit. I prefer when there are three things in a list though, so not perfect.)

Notes – After the phenomenon of E.T. the Extra-Terrestrial (1982), Universal thought Conan the Destroyer (1984) would make more money if it were family entertainment. Schwarzenegger argued against this change but they overruled him. Director Richard Fleischer agreed with Schwarzenegger, but complied with Universal’s wishes to make Conan the Destroyer (1984) more like a comic book. (Oh that is a serious change. The source material for Conan is very pulpy and the almost grindhouse feel of the original plays into that well. Here must be where it really went wrong. Making this more family friendly with humor and stuff would be really, really, really, really, really dissapointing.)

Arnold Schwarzenegger recently confirmed Conan the Conqueror is moving forward. Previously it was suggested that the sequel would totally ignore this disaster area (methinks this is a good idea Arnold).

The original screenplay for the film became the graphic novel Conan: The Horn of Azoth (which I now officially want to read).