I gotta tell you that I’m pretty excited for this next film. I remember when it came out and even as a middle schooler I was like “WTF mate.” It’s been bandied about for BMT before and its time in the sun is finally here. That’s right, we are watching The Avengers! Before you gasp and retire to your fainting couch let me make clear that this is not Marvel’s The Avengers. It is the 1998 adaptation of the 1960’s television show The Avengers. By all accounts the entire post-production for the film was a disaster and resulted in an incomprehensible mess. Released on August 14th (in the midst of the dump months) it is easily the worst film released on that day. Other than The Goods: Live Hard, Sell Hard, it’s really the only qualifying movie for August 14th period. 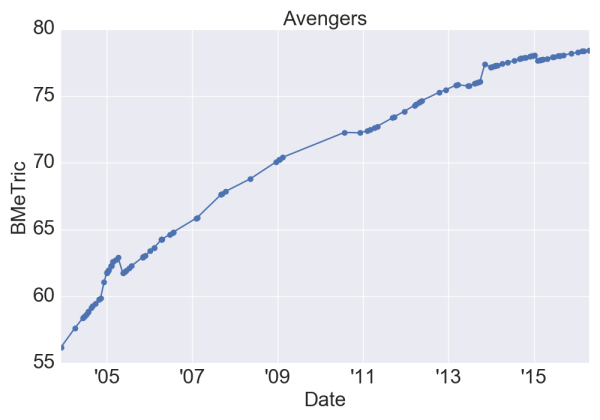 (As usual with these types of things it just has gone up and up since IMDb became big-ish. Curiously, the rating has increased a bit over the time period. I have no idea why. Who was just clamoring to go to IMDb to give this a four or whatever? No one.)

Leonard Maltin – 2 stars –  Retread of the popular British TV show of the ‘60s about two saucy secret agents tries in vain to capture its stylishness and insouciance – but Fiennes is woefully miscast, Connery gives a one-note performance as a bad guy who wants to control the Earth’s weather, and a fine supporting cast is wasted. Thurman is likable enough, but the film is utterly flat.

(Insouciance – noun – casual lack of concern; indifference. Thanks Mr. Maltin, I’ve learned a new word that I would struggle to use in any context. Funny enough he destroyed this movie on his podcast, so where the hell does two stars come from? Also this sounds boring.)

(Ugh. This trailers insouciance is offensive. You can almost tell they were trying their best to make a trailer out of what is definitely going to be a movie almost entirely constructed from cutting room scraps. This could either be our greatest triumph or literally the most boring moving on the planet.)

Directors – Jeremiah S. Chechik – (Known For: National Lampoon’s Christmas Vacation; Benny & Joon; Tall Tale; BMT: The Avengers; Diabolique; The Right Kind of Wrong; Notes: Nominated for the Razzie Award in 1999 for Worst Director for The Avengers. Weirdly sparse bio for such a oddly impressive short directing career. Has stuck to tv for about twenty years now.)

Writers – Sydney Newman (television series The Avengers) – (BMT: The Avengers; Notes: Extremely influential titan of British television including heading the the BBC for several years. Sadly passed away within a year of this movie coming out.)

Don MacPherson (written by) – (Known For: Absolute Beginners; BMT: The Avengers; The Gunman; Crossing the Line; Notes: Nominated for the Razzie Award in 1999 for Worst Screenplay for The Avengers. What a strange guy. Wrote Crossing the Line in 1990, this in 1998 and then the Gunman in 2015 … nothing much else officially credited. According to wikipedia though it seems like he is the script doctor on a ton of movies and series.)

Actors – Ralph Fiennes – (Known For: The Harry Potter Series, Hail, Caesar!; Spectre; A Bigger Splash; Schindler’s List; The Grand Budapest Hotel; Skyfall; The Hurt Locker; In Bruges; Red Dragon; The Prince of Egypt; The English Patient; The Reader; Maid in Manhattan; The Constant Gardener; Great Expectations; The Duchess; Nanny McPhee Returns; Strange Days; Coriolanus; The Curse of the Were-Rabbit; The Invisible Woman; Quiz Show; BMT: The Avengers; Clash of the Titans; Wrath of the Titans; Notes: Nominated for the Razzie Award in 1999 for Worst Actor and Screen Couple  for The Avengers. Probably most famous for his roles in Schindler’s List, The English Patient and as Voldemort in Harry Potter. Incredible British stage and screen performer with the absolutely incredible real name of Ralph Nathaniel Twisleton-Wykeham-Fiennes)

(Enormous, ridiculous, astounding bomb. So bad that it was the keystone to what is widely considered to be one of the worst summers in hollywood history, the summer of 1998.)

#49 for the Action Heroine genre (Just below BMT classic Elektra)

Rotten Tomatoes – 5% (4/82): A TV spinoff that lacks enough energy to spin, The Avengers is an ineptly written, woefully miscast disaster.

(Low energy. A foreboding statement indeed. Everything about these descriptions makes this sound dull. This best have crazy BMstreeT Cred) 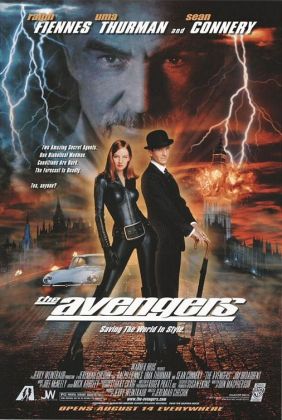 (This is literally the worst thing that’s ever happened to posters. If (when?) I teach a class on bad movie posters and taglines this will be used as the example for when everything goes wrong. An insane person made this.)

Tagline(s) – Two amazing secret agents. One diabolical madman. Conditions are dark. The forecast is deadly. Tea, anyone? (F, what the hell?)

Saving the World in Style (B-)

(Alright, so I guess both kind of try and get the insouciance across. The first is just … it is the longest tagline. It was like I was reading it forever. At one point I think I fell asleep while reading it, then woke up, made breakfast, and I was still reading it. The second is okay but somewhat meaningless. I mean … I get the insouciance, but not much else.)

Notes – The film’s critical and commercial failure, along with the equally unsuccessful and equally maligned The League of Extraordinary Gentlemen (2003), was partly responsible for Sean Connery’s decision to retire from the film business. (As The Cat in the Hat would say: Ohhhh Yeaaaahhhhhhhh!)

Peter Bart’s book “The Gross” covered the film’s unfolding disaster in great detail. Among other facts: Warner Brothers greenlit the film largely on the strength of a star-packed cast and their appreciation of Jeremiah Chechik’s work on Diabolique (1996) and were horrified when seeing what the first cut was like. The first screening took place in front of a “largely Spanish-speaking, working class” audience in Phoenix, AZ who hated the film; the studio then forced Chechik to cut many of his favorite scenes and conduct reshoots; and the final cut went from 115 to 89 minutes and was completely incoherent. The studio even refused to hold further test screenings, or to have an official premiere before the film’s August 1998 release. (holy shit, yes!)

Speaking at the 2006 AFI Lifetime Achievement Award ceremony, Eddie Izzard said that he took a role in the film in order to meet Sean Connery. (ha!)

In the original script the part of Sir August was much smaller but when Sir Sean Connery joined the project he asked for the part to expanded. (Reminds me a little of Bulletproof Monk, where the role of The Bulletproof Monk was nonexistent in the material, but since Chow Yun-Fat was attached it became a main role)

At one point, David Fincher was interested in writing and directing the film with Charles Dance starring as John Steed. (If only there were alternate universes where we could see such a thing)

Producer Jerry Weintraub had hopes for sequels to the film, having spent around a decade trying to get the project green-lit. (Will be interesting to see whether the ending sets up for a sequel)

Awards – Won the Razzie Award for Worst Remake or Sequel

Nominated for the Razzie Award for Worst Actor (Ralph Fiennes)

Nominated for the Razzie Award for Worst Actress (Uma Thurman)

Nominated for the Razzie Award for Worst Screen

Nominated for the Razzie Award for Worst Screenplay (Don MacPherson)

Nominated for the Razzie Award for Worst Original Song (Storm