You know we need a clean slate after a terrible film like The Fog. Just gotta pick something that’s not too bad and not too good. Just middle of the road… … … JK! We are watching Material Girls starring Hilary and Haylie Duff! A Girls Night Out travesty sure to destroy our will to live. The Calendar cycle is truly a wonderland of BMT Street Cred. This film was released on August 18th and beat out the likes of Mortal Kombat and Accepted to hold the spot for that day. The fact that it was actually released is a minor miracle in itself (and in 1500 theaters no less). Let’s go! 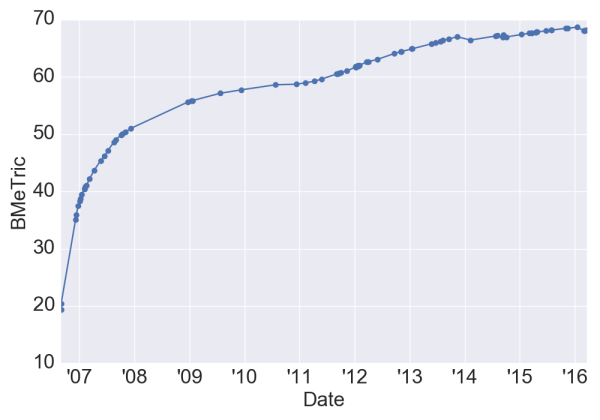 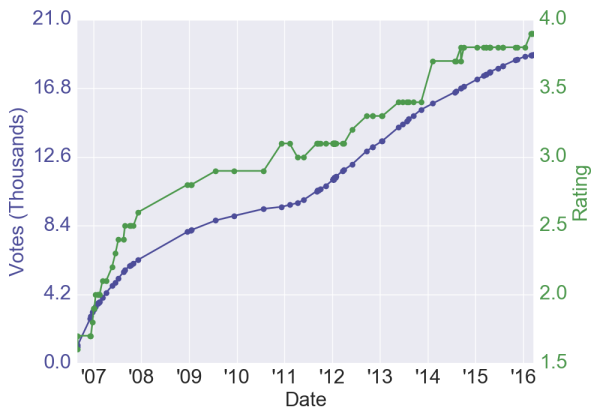 (The rating plot for this is unbelievable. So unbelievable I had to do an entire BMT:CSI:SVU (We’re the Special Victims) on it. To add a bit to that post: First, I find the votes/rating trajectory interesting for another reason, it has that distinctive 2011 inflection point in the IMDb votes. But not only that, it has the same inflection in the ratings plot and the BMeTric plot! You can’t move that rating without votes, so it makes sense, but I think that is a first and kind of an amazing example of regression to the mean and how IMDb likely expanded their user base around 2011. Second, the fact that this almost has a 70+ is absurd. The Calendar just keeps on giving street cred, thanks Calendar.)

Leonard Maltin – 2 stars –  Two spoiled cosmetics industry heiresses lose their money after a controversy involving face cream and a disfiguring skin disease. Forced to suffer indignities like riding the bus and wearing last year’s fashions, they eventually learn the value of hard work and fight to reclaim their company’s reputation. This movie glorifies the “high life” while praising its heroines for transcending it. Filled with absurdities, but fast paced, colorful, and painless.

(Two stars!? Color me shocked. I love how Leonard goes to this length to critique a film like Material Girls, especially when he takes umbrage with the hypocrisy of the plot. It’s Material Girls Leonard. I don’t think they cared. Also a note: this plot is hilariously similar to that of Catwoman starring Halle Berry. [Patrick’s Note: TWO STARS?!?!])

(We will see if this trailer lasts. There was another one which was apparently taken down or something. Oh yeah, this movie looks like a non-movie and awful and I do not look forward to this viewing experience.)

Directors – Martha Coolidge – (Known For: Real Genius; Valley Girl; Rambling Rose; BMT: Material Girls; The Prince and Me; Out to Sea; Angie; Notes: Saaaaay Whaaaat? Real Genius for reals? She was the first female president of the DGA.)

Jessica O’Toole and Amy Rardin (written by) – (BMT: Material Girls; Notes: Writing partners, most of their credits are for An American Girl stories. Co-executive producers of the shows Selfie and Jane the Virgin.)

Haylie Duff – (Known For: Napoleon Dynamite; The Lizzie McGuire Movie; BMT: Material Girls; I Love Your Work; Notes: Nominated for the Razzie Award in 2007 for Worst Actress and Screen Couple (Material Girls). Currently does a lot in cooking with a blog, television show, and book called Real Girl’s Kitchen.)

#22 for the Summer Girl Power genre – Late Summer (July/August) Girlpower. Ever since Clueless, appealing to the young female audience in July and August has proved quite profitable.

(Funny that it almost made its money back domestically despite being a gigantic bomb. Not the worst “Summer Girl Power” film of all time. That would be Undiscovered starring Ashlee Simpson which we are definitely watching for BMT. That looks like the worst. Yay! Once again though we are looking at a film in a “dying genre”. Whether this is with how boxofficemojo defines genres there hasn’t been a summer girl power movie since 2010 and this movie appears at the tail end of its existence (sorry for how the plot looks, there are just not than many summer girl power movies so it gets a little jumpy). My guess is that “girl power” movies now tends to come out later, think Hunger Games, but they were amazingly and consistently profitable for a while there.)

Rotten Tomatoes – 4% (2/54): Plagued by paper-thin characterizations and a hackneyed script, Material Girls fails to live up to even the minimum standards of its genre.

(You mean the minimum standards of the “Summer Girl Power” genre? This is truly one of the lowest reviewed films of the 2000’s probably.) 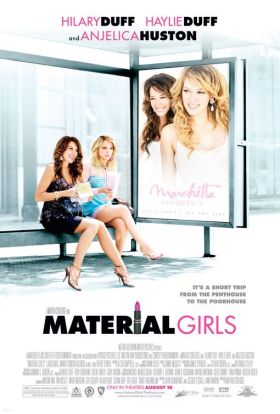 (There are four rules of thumb for posters: don’t use white as the principal color, don’t feature people without artistic modification, employ some symmetry, and jazz up the font. This (nearly) fails all of them. On top of this, the Duff sisters are on the poster twice(!). It’s like Shaq in the Steel poster (unlikely connection). Only didn’t get an F because of the lipstick “I” in the title.)

Tagline(s) – It’s A Short Trip From The Penthouse To The Poorhouse. (C-)

(… … Oh sorry, I fell asleep while reading that tagline. Too long, needs to be more clever, and needs another “p” word to get some nice alliteration pop.)

This is the first film that both Hilary Duff and Haylie Duff are in together. (Obviously)

Hilary improvised many lines and moments in the film, Coolidge noted on the DVD commentary. Among others, Hilary came up with the Lucy walk when the girls are dressed up as Sassy maids and added the reference to women having their own buses in Japan when the sisters are riding the public transit on the spot. (Can. Not. Wait. To listen to the commentary)

Based on Sense and Sensibility, a novel by Jane Austen. (“Based” might be a strong word here)