On the precipice of finishing the Now A Major Motion Picture cycle, we of course chose the longest book in the world for the Razzie section. That’s right, we’re watching The Bonfire of the Vanities starring Tom Hanks and BMT Legend Bruce Willis. The film was based on the Tom Wolfe classic of the same name, which comes in at a weighty 630 pages (oof). Luckily I started in on the behemoth weeks ago. This has been on my BMT future prospects list since almost the beginning of time, mostly because I couldn’t believe that there was a Hanks-Willis collaboration that bombed so badly. It was nominated for five Razzies (Picture, Screenplay, Director, Actress, and Supporting Actress) and an entire book was written about its troubled production (look at that street cred!). I did not get a chance to read that book… yet. Let’s go! 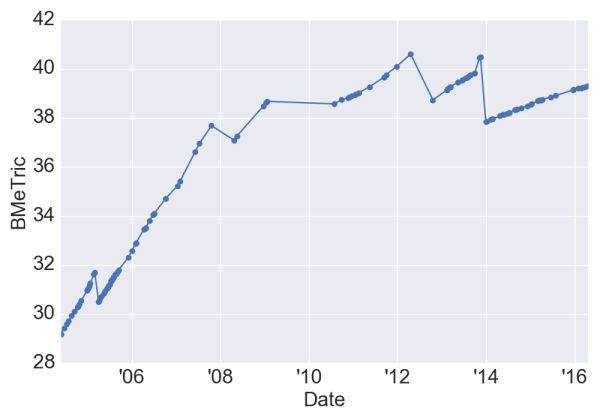 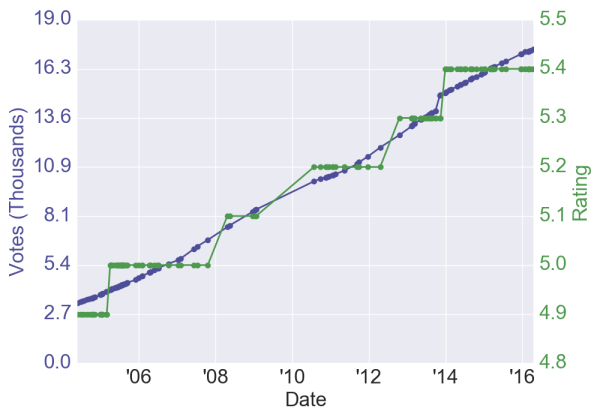 (Beautiful. Regression to the mean is there, as the votes rise the rating rises as well. But also there is no 2011 inflection point, why? I believe it is because this movie is kind of perfectly “average”. It isn’t popular by any means, but it also isn’t unpopular, probably because of the book it has a built in audience. Make the BMeTric plot interesting as well, where it reaches a pretty strong plateau.)

Leonard Maltin – BOMB –  Appallingly heavy-handed “comedy” about a cocky Wall Street wheeler-dealer whose well-insulated life begins to crumble when his wife learns he’s fooling around, and he and his paramour are involved in a hit-and-run accident. With all the power – and nuance – of Tom Wolfe’s novel removed, and all the characters turned into caricatures (racist and otherwise), what’s left is a pointless charade, and a pitiful waste of money and talent.

(Racist caricatures? Pitiful waste of talent? Nearly endless sentence to start what is in reality a fairly banal review for a rare BOMB from Leonard. All point to this being an enigma, a bizarre unfortunate twisting of BMT in general. Uh oh … I feel like my brain is already melting and I’m not even watching this nonsense movie…)

(Wow, this is a truly classic trailer. Heavy voiceover and film clips of characters seemingly responding to the voiceover. It’s almost like a short film. That being said, this trailer doesn’t tell me much about what the film is supposed to be about or what the conflict will be. It comes across as, well… a pointless charade.)

Directors – Brian De Palma – (Known For: Scarface; Mission: Impossible; The Untouchables; Carrie; Carlito’s Way; Dressed to Kill; Body Double; The Fury; Casualties of War; Blow Out; Femme Fatale; Snake Eyes; Obsession; BMT: The Black Dahlia; Mission to Mars; Passion; The Bonfire of the Vanities; Wise Guys; Notes: Actually went to Columbia University for Physics, but after graduating decided to pursue filmmaking and enrolled in a theater graduate program. Nominated for the Razzie Award in 2001 for Worst Director for Mission to Mars, 1991 for Bonfire of the Vanities, 1985 for Body Double, 1984 for Scarface, and 1981 for Dressed to Kill.)

Tom Wolfe (novel) – (Known For: The Right Stuff; BMT: The Bonfire of the Vanities; Almost Heroes; Notes: Acclaimed novelist. I presume his credit for Almost Heroes is a case of mistaken identity, but it is hard to prove. Not mentioned on his wikipedia page, so I’m leaning towards it being not true. Funniest thing is that it’s mentioned in books and shit… presumably because the author saw the “fact” on imdb.)

Actors – Tom Hanks – (Known For: A Hologram for the King; Forrest Gump; Saving Private Ryan; Bridge of Spies; The Green Mile; Cast Away; Cloud Atlas; Catch Me If You Can; Cars; Toy Story; Captain Phillips; Charlie Wilson’s War; Toy Story 3; You’ve Got Mail; Extremely Loud & Incredibly Close; Road to Perdition; Apollo 13; A League of Their Own; Splash; The Terminal; Saving Mr. Banks; Big; Toy Story 2; Philadelphia; The ‘Burbs; Sleepless in Seattle; That Thing You Do!; Turner & Hooch; The Simpsons Movie; The Money Pit; The Polar Express; The Ladykillers; Bachelor Party; Dragnet; Joe Versus the Volcano; The Great Buck Howard; Nothing in Common; Volunteers; The Man with One Red Shoe; Punchline; BMT: The Bonfire of the Vanities; Larry Crowne; He Knows You’re Alone; The Da Vinci Code; Angels & Demons; Notes:  With someone this famous you almost just have to link to some current news. Check out the Instagram selfie posted by wife Rita Wilson, cause why not?)

Bruce Willis – (Known For: Pulp Fiction; Sin City; The Fifth Element; Sin City: A Dame to Kill For; The Sixth Sense; Looper; Die Hard; Moonrise Kingdom; Alpha Dog; RED 2; RED; Twelve Monkeys; Ocean’s Twelve; Unbreakable; The Expendables; Die Hard 4.0; The Expendables 2; Grindhouse; Die Hard 2; Lucky Number Slevin; The Last Boy Scout; Charlie’s Angels: Full Throttle; Planet Terror; Die Hard: With a Vengeance; BMT: Look Who’s Talking Too; The Cold Light of Day; Vice; A Good Day to Die Hard; North; The Prince; Color of Night; Lay the Favorite; Breakfast of Champions; The Whole Ten Yards; Extraction; Cop Out; The Bonfire of the Vanities; G.I. Joe: Retaliation; Hudson Hawk; Perfect Stranger; Fire with Fire; Striking Distance; Precious Cargo; Rock the Kasbah; The Story of Us; Blind Date; Mercury Rising; Marauders; Loaded Weapon 1; Surrogates; The Jackal; Sunset; Last Man Standing; Armageddon; Hostage; Tears of the Sun; Notes:  Again, too famous. Recently got sued for his acting fee on an unfinished film. Kind of incredible story. Paid him $8 million dollars and then shut down cause they couldn’t pay the crew! Won the Razzie Award in 1999 for Worst Actor for Armageddon, Mercury Rising, and The Siege; Won the Razzie Award in 1992 for Worst Screenplay for Hudson Hawk; Nominated for the Razzie Award in 1995 for Worst Actor for Color of Night, and North and in 1992 for Hudson Hawk.)

(Oooooooof what a disaster. No wonder this is so well known in bad movie circles. $47 million seems like a ton for a comedy book adaptation, I wonder what the thought process there was as well.)

(RT must be busy. Fifty-one reviews for a 1990 film is incredible! Must be diving through the newspaper archives. Good for them. My consensus guess would be: Solid acting performances by Willis and Hanks can’t save this satirical dud from going up in flames.)

Poster – Sklogfire of the Vanities (B+) 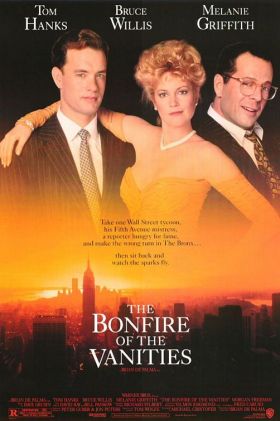 (I like that it has a color theme and the classic symmetry. I particularly like the story that it tells with the city seeming to being on fire and consuming the actors above. The “bonfire” if you will. Could have been done in an artsier way, though. Lacks some aesthetic. Interesting thing about this poster though? If you saw this poster in a theater what time period would you think the film takes place? I would certainly not guess the 80’s.)

Tagline(s) – Take one Wall Street tycoon, his Fifth Avenue mistress, a reporter hungry for fame, and make the wrong turn in The Bronx…then sit back and watch the sparks fly. (F)

(That is super old school. Before they mastered the art of the tagline. Horrendously long. Unacceptable.)

(You might ask yourself: what does this keyword even mean? I don’t know. In Zoolander 2 they were in a crazy massive car crash at one point. In Doom a disease or something is released into a Mars facility. In Daredevil he gets sprayed with toxic superhero chemicals. Solid list regardless though. Reminds me that we have to do Cool World at some point.)

Notes – Alan Arkin was replaced by Morgan Freeman when it was decided to change the judge’s ethnicity from Jewish to African-American in order to moderate criticism of the film’s racial politics. (Kind of a funny choice. If you make a film adaptation that is a satirical take on the racial politics of 80’s New York City and you get criticized for the racial politics… then you probably aren’t doing satire right.)

Steve Martin was the original choice to play Sherman McCoy by original director Mike Nichols. Nichols left the project and was replaced by Brian De Palma who also wanted Martin for the role but the producers disagreed and wanted Tom Hanks cast instead. (Martin is an odd choice for the role. Hanks fits the part naturally much better.)

Actresses considered for the role eventually played by Melanie Griffith include Lena Olin, Lolita Davidovich, and Uma Thurman, (who tested for the part and actually came close to getting it.) Brian De Palma preferred Thurman to Melanie Griffith, but Tom Hanks reportedly felt uncomfortable over Thurman’s relative inexperience and persuaded the director against her casting. (Lena Olin better fits the role physically, actually. But Griffith was good.)

Nominated for the Razzie Award for Worst Actress (Melanie Griffith)

Nominated for the Razzie Award for Worst Screenplay (Michael Cristofer)