You would think that we’ve endured enough punishment after pushing our way through the 4th and 5th entries in a film franchise whose entries routinely run far past two hours. You would be wrong. Enter the horror entry for the 2017 Cycle. That’s right! We’re watching the critically reviled third entry of the Rings franchise, simply called Rings. This film not only includes a well reviewed first entry (The Ring) and a BMT qualifying second entry (The Ring Two), but also many other adaptations and version made in different countries (including a Japanese original that the series is closely adapted from). So we got a lot to work with and at the very least two films to watch. We never learn. It’ll be truly a Thanksgiving miracle when I get through these films. Happy TGivs (as the kids call it) and let’s go! 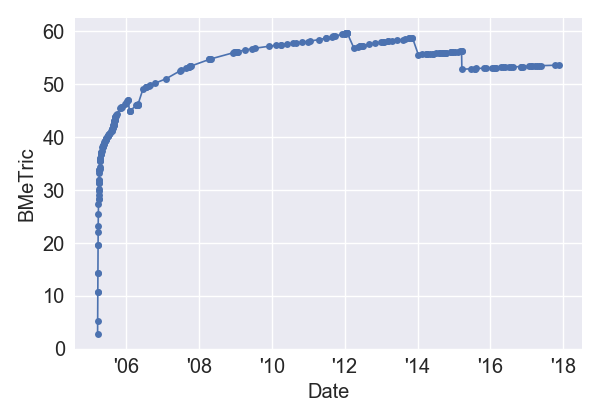 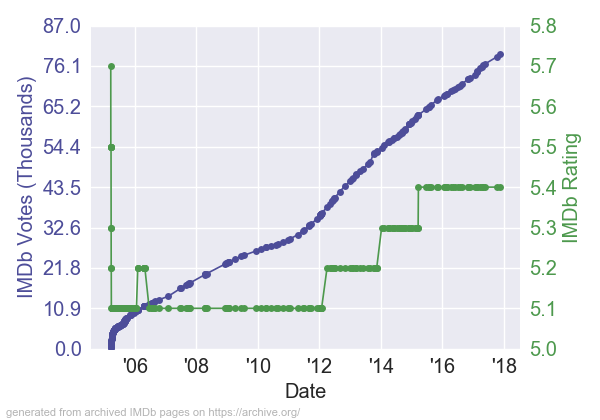 (That is actually a lot more votes than I would think, although I always underestimate how popular horror films are (and this is a sequel to an incredibly famous film to boot). The rating suggests it is bad, but, again, horror fans are a little odd in this sense. I think a “popular” horror film does tend to have a lower rating on average. This is something I would like to explore more next year in my analyses, so hopefully I’ll get some data to actually prove the suppositions I’ve held for a while now.)

Leonard Maltin – 2.5 stars –  Fleeing Seattle for the small town of Astoria, Oregon, Watts discovers that the coldhearted ghost of a loveless child is still after her and her son, as well as anyone else hanging around. Slow and overlong, but often delivers the spooky goods, and director Nakata – who made the Japanese Ringu – uses misty Pacific Northwest locations well. Entire cast is good, especially young Dorfman, but not everything makes sense. This is not a remake of the Japanese sequel to Ringu.

(Want to hear something crazy? Leonard gave this one better reviews than the original. Which is shocking because having just rewatched the original I thought it was brilliant. I figured maybe since he apparently likes when the “spooky goods” are delivered it would be because The Ring is indeed quite light on scares (or spooky goods of any kind actually). But nope, it apparently is because it is overlong … despite the second being longer than the first. This officially intrigues me. Being a relative novice concerning JHorror this should be a decent example of something that is kind of inbetween two sensibilities I think. I guess we’ll see.)

(That does seem spookier than the original. This seems almost like a Jaws / Jaws 2 kind of relationship. In the original Ring you see very little of Samara by design. The film plays out as an investigative journalism movie more than anything else (interestingly). But obviously there is no reason to play a sequel that way as well, so you go for the creepier direct ghost story. I can see how they could fall into the over-explaining trap though, because they seem like they are muddling the rather simple mythos.)

Directors – Hideo Nakata – (Known For: Ring; Dark Water; Kaosu; Future BMT: Chatroom; Ringu 2; BMT: The Ring 2; Notes: Director of the original Ring film (Dark Water is also a adaptation of a book by the same author). I think this is his only attempt at making a film in the US.)

Hiroshi Takahashi (1998 film Ringu) – (Known For: The Ring; Ring; Future BMT: Ringu 2; BMT: The Ring 2; Notes: I cannot find anything about this guy on the internet. Just a small wiki stub referring him to vaguely as “J-Horror”.)

David Dorfman – (Known For: The Ring; Galaxy Quest; Bounce; Panic; 100 Mile Rule; Future BMT: Drillbit Taylor; The Singing Detective; The Texas Chainsaw Massacre; BMT: The Ring 2; Notes: Graduates from UCLA at the age of 17 and Harvard Law at the age of 21. Impressive stuff.)

Sissy Spacek – (Known For: The Help; Carrie; JFK; Hot Rod; Tuck Everlasting; 3 Women; Badlands; The Straight Story; Blast from the Past; North Country; In the Bedroom; Missing; Coal Miner’s Daughter; The Man with Two Brains; Get Low; Affliction; Nine Lives; A Home at the End of the World; Prime Cut; Crimes of the Heart; Future BMT: Four Christmases; Gray Matters; Deadfall; The Mommy Market; BMT: An American Haunting; The Ring 2; Notes: Won an Oscar for Coal Miner’s Daughter. Her daughter is Shuyler Fisk who you might recognize as the female lead in Orange Country with Jack Black and Colin Hanks.)

(That seems solid for a horror film. They might have expected more considering what The Ring did ($130 million domestic), but it isn’t crazy that Ring 2 still sits pretty high up on these horror related lists on box office mojo.)

#20 for the Horror – Supernatural genre 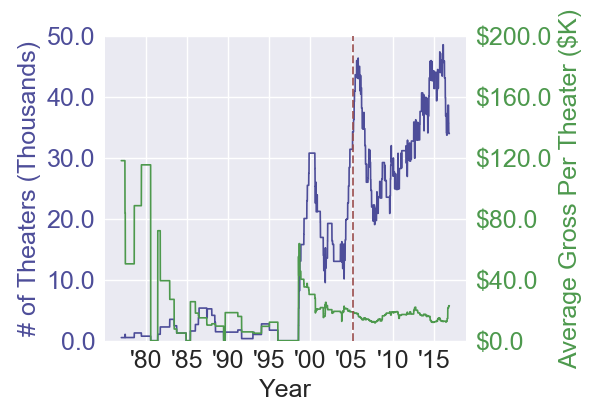 (This genre is a-boomin’ these days fueled by the recent hits in Sinister and The Conjuring (and the offshoots from that). There are a ton of stinker in there too (like Rings!), and I think it is starting to react a bit of a saturation point. I wonder if we’ll see a true collapse though. People must love ghost stories, because this has been a giant horror genre for almost 20 years now and it looks to be as popular as ever.)

#5 for the Horror Remake genre 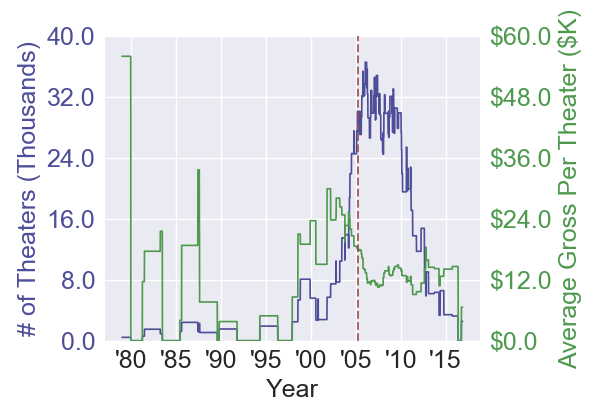 (The peak from ‘05 to ‘10 is just too good to pass up, it was the golden age of bad movies for a reason. I imagine it’ll come back, but studios seem pretty satisfied with making “sequels” and soft-reboots more than remakes at this point. I think the fact that they couldn’t get any of the Friday the 13th / Halloween / Nightmare on Elm Street / Texas Chainsaw Massacre remakes to catch hold made them put other remakes on hold. I think the new Halloween even has become a sequel at this point. It’ll be back. It always comes back.)

#7 for the Remake – Asian genre 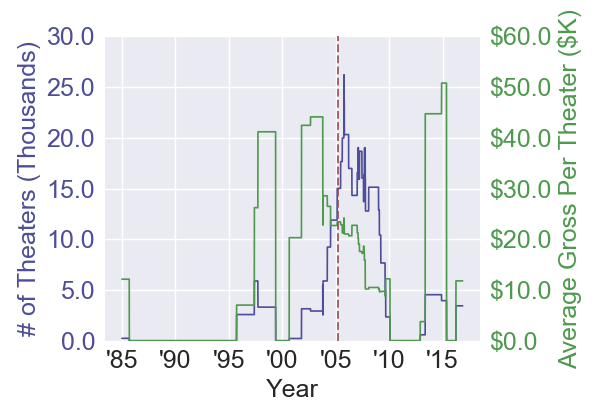 (There were actually several other plots I could have put here, but, like this, most of them just looked like smaller versions of the horror remake plot from above. This one is interesting because you can see how the Ring itself jumpstarted a very short lived craze. The issue is I think that a lot of the original J Horror films from Japan are … not great. Like One Missed Call. And once they burned through the relatively few good options they were left with garbage. Godzilla is that big peak in ‘15 by the way.)

Rotten Tomatoes – 20% (36/184): Ring Two serves up horror cliches, and not even Hideo Nakata, the director of the movies from which this one is based, can save the movie from a dull screenplay full of absurdities.

(The bad reviews seem to note how perplexing the script is and how many leaps of logic are made. Ebert himself specifically notes that you cannot discern the rules surrounding the things that are supposed to scare you. 20% is pretty terrible though.) 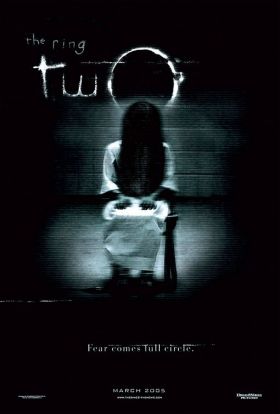 (It’s got its style and tells a story. The color scheme is at least consistent and the font is original. This has everything I ask for in a poster, in a simplistic kind of way.)

(Oh Jeez Louise. That is unfortunate… why did you put that in my brain. Concise but pretty much nonsense and straight-up silly.)

(Wow, some great stuff there. I’m stunned Blair Witch II isn’t there, and I have to at some point see The Fly II considering the original is both a great classic sci-fi and an example of practical effects not exactly working out so hot. Goldblum just looks hilarious by the end of the film.)

Notes – During the shooting of a carnival scene, locals mistook the set for an actual carnival and wandered in. They were included as extras in the film.

According to the production notes, there were bizarre incidents on set of life imitating art. On the seventh day, the production office was discovered to have flooded overnight, the result of a burst water pipe. Water is a strong theme in the film. In response, Director Hideo Nakata requested a Japanese purification ceremony be carried out by a Shinto minister, but the strange incidents continued. While on-location, a swarm of bees descended on the prop truck, prompting the immediate evacuation of the department, before the bees left as quickly as they had arrived. For no apparent reason, a five-gallon water jug burst open in the production office kitchen, once again flooding the same room that had flooded earlier. One morning on the Universal lot, a Set Decorator stepped out of the parking garage to discover an antlered buck charging across the asphalt in her direction. Though deer are a regular occurrence in the hills, the similarity to the deer attack in the film is uncanny. (Indeed, y’all don’t sound like crazy people at all)

Copies of the “Cursed Tape” were dropped in public places as a form of promotion. After about five minutes of footage, the viewer is directed to the movie’s website. (Weird, and I don’t like that at all)

When Rachel takes the pills and puts them on the sandwich for Aidan, she crushes the pills into a powder. The medicine bottle has a label that can be seen with the name Tony Bonaventura, who is the Property Master for the film.

There is a reference to a “Dr. Koji” by the psychiatrist. This is a nod to the original writer of the Ring books, Kôji Suzuki.

When Naomi Watts and her son go to the outdoor Astoria Antique Fair Swap Meet, Watts picks through a bunch of used VHS tapes at a vendor’s stand – and all the movies are DreamWorks titles, such as Old School (2003), and Win a Date with Tad Hamilton! (2004). (Gross, all of these notes are dumb and just weird studio crap)

In the scene following the tape burning, when Rachel gets Aiden out of bed, after finding him “soaked and freezing”, after having a nightmare, we can see that the wet part of his bed is ring-shaped.

Feature film debut of Mary Elizabeth Winstead, though she only appears in the unrated version.

Hideo Nakata, was the director of the original film Ring (1998) of which this film’s predecessor is a remake. (Which makes it all the more bizarre this turned out terribly. Although, it is pretty rare for directors from Asian studio hubs like South Korea, Japan, and Hong Kong to make a successful jump to Hollywood).

Ryan Merriman, Emily VanCamp, and Kelly Stables all previously appeared in the video short Rings (2005) which served as a prequel to this film.

Hideo Nakata’s directorial debut in America. (I’m not going to count this as a one-and-done, although I don’t think he’s directed an American feature since)