Perhaps you thought the embarrassment of last year would save us from this year. But no, it is our solemn duty. That’s right! It’s the first BMT Live! of the year and we are finishing the Fifty Shades series with a theatrical viewing of Fifty Shades Freed. Fifty Shades Darker was hands down the worst theater experience of my life and I’m truly dreading this final chapter. Pray for my soul and pray that I’m not viewed as some deviant as I sneak my way in and out of this film after buying tickets to Peter Rabbit or something. Sigh. Let’s go!

(Given that this film was only just released I’ll forgo the plots. The original is at 4.1 with 200K votes, the second at 4.6 with 66K, and the third is currently at 4.3 and 10K votes. So I have a theory that the second film is considered better than the first because of the soundtrack, which is kind of shockingly good. I’m very excited to see what they do with the soundtrack for the conclusion to the series.)

RogerEbert.com – 2.5 stars –  The problem with the “Fifty Shades” franchise—if it can be called a franchise—is not so much its portrait of a controlling man manipulating his lover past her comfort zone, although earlier installments feature such scenes. The problem is there’s not enough sex and too much … everything else.

(Preach sister! It is a very strange mark of the series that it lacks a certain … how do you say? Uh … softcore pornography that I believe was the main draw of the book series. I wouldn’t know, I read exactly 10 pages of the first book before my mind rejected it and I threw it in the garbage (well … returned it to the library anyways))

(So yeah … so you see all those car chases and the stalker and kidnapping and etc. etc. … that’s what the review is talking about. The film gets all caught up in the “exciting” stuff, it sometimes forgets what most people want is to mainly to see Dornan’s dong. Take a note from Color of Night and give the people what they want!)

Directors – James Foley – (Known For: Glengarry Glen Ross; At Close Range; Confidence: After Dark; The Corruptor; After Dark, My Sweet; Two Bits; Future BMT: Who’s That Girl; Perfect Stranger; Fear; BMT: Fifty Shades Darker; Fifty Shades Freed; The Chamber; Razzie Notes: Nominated for Worst Director in 1988 for Who’s That Girl; and in 2018 for Fifty Shades Darker; Notes: A major player in the 80s and 90s he’s been doing a lot of television more recently. Started as a director for Madonna shorts, and ultimately was the best man to Sean Penn when he married her.)

Writers – Niall Leonard (screenplay by) – (BMT: Fifty Shades Darker; Fifty Shades Freed; Notes: E.L James’ husband. He’s been a (mostly television) writer since the 80s including multiple episodes of Monarch of the Glen. He was put in primary control of the script in order to get the second and third film on track under the singular vision of James.)

E.L. James (based on the novel by) – (BMT: Fifty Shades of Grey; Fifty Shades Darker; Fifty Shades Freed; Notes: A bestselling author, her story is amazing. Twilight fanfiction to making $100 million in a year.)

Actors – Dakota Johnson – (Known For: The Social Network; How to Be Single; 21 Jump Street; Black Mass; A Bigger Splash; The Five-Year Engagement; For Ellen; Future BMT: Anarchy: Ride or Die; Date and Switch; Goats; Crazy in Alabama; Chloe & Theo; BMT: Fifty Shades of Grey; Fifty Shades Darker; Fifty Shades Freed; Beastly; Need for Speed; Notes: According to The Sun Dakota Johnson got into shape for these films by doing hot yoga. Also, she has said that her parents have never seen any of these movies.)

Jamie Dornan – (Known For: Marie Antoinette; Anthropoid; The Siege of Jadotville; Future BMT: The 9th Life of Louis Drax; BMT: Fifty Shades of Grey; Fifty Shades Darker; Fifty Shades Freed; Notes: Has recently ruled himself out of starring in any other Fifty Shades films in the future. There aren’t any other books, but maybe he’s worried they are going to Harry Potter this stuff.)

(This is going to smash it. This isn’t even its full strength Valentine’s Day! It made back its budget worldwide already. It is smashing it.)

#49 for the Romantic Drama genre 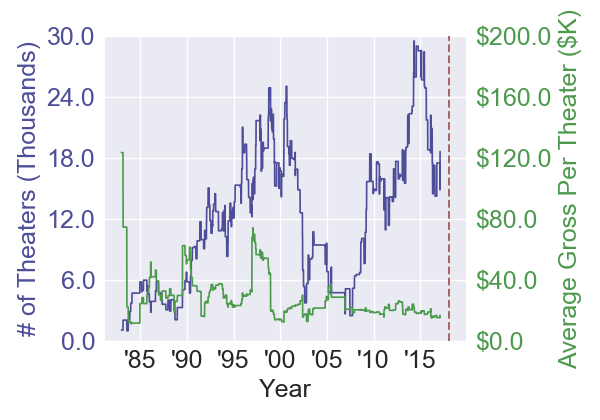 (Hmmm, so a theory on why the genre totally collapsed in the early 2000s, Spiderman came out and Hollywood was making money hand over fist, so they put anything that didn’t pull down cash on the backburner. Then they discovered, shockingly, that women spend money too, and the genre has found a new life producing Nicholas Sparks books and things like Fifty Shades. We’ll see what they do now that Fifty Shades is almost definitely over. Previous BMT: Fifty Shades Series, Safe Haven, The Lake House, Random Hearts, Endless Love, Captain Corelli’s Mandolin, The Choice, Here on Earth, The Scarlet Letter)

Rotten Tomatoes – 11% (15/118): Fifty Shades Freed brings its titillating trilogy to a clumsy conclusion, making for a film franchise that adds up to a distinctly dissatisfying ménage à trois.

(Every time. Clumsy conclusion, good conclusion … who cares? I’m just here to sit awkwardly in a theater and feel uncomfortable for two hours. Do you know what I don’t appreciate? The clumsy use of titillating and ménage à trois in this review Rotten Tomatoes … for shame.) 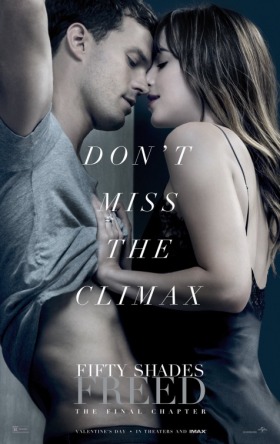 (This is fine and stylish. I think every entry has been a massive disappointment in the font department, but such is life. Also really a perfect poster for Patrick to photoshop his face onto. Get a smug Sklog Wagon look to the camera on this one and we got gold.)

(This is clever and short, so I have to give it props there. However it is particularly vague on what we are to expect from the plot of the film. So just above average.)

(Oooo I’m loving this list! Although MacGruber is great, so … forget about that one. But Tomcats should definitely be on the radar.)

Notes – Scenes were being filmed in Nice, France at the same time of the Nice terror attacks in July 2016. (Depressing)

There was talk that Jamie Dornan wouldn’t reprise his role as Christian Grey but those rumors were put to rest as of February 25th 2015 when his agent stated he was devoted to the sequels. (Yeah, this is a note for the previous film, they filmed the second and third together … these notes are weird)

Some of the filming was done at Canadian singer-songwriter Sarah McLachlan’s home. (What?)

Third and final chapter of the Fifty Shades trilogy. (For now, don’t short sell yourself. You can make a fourth, no matter what Dornan thinks)

Dakota Johnson’s fourth consecutive movie to debut on Valentine’s Day weekend. The first was Fifty Shades of Grey (2015), the second was How to Be Single (2016), and the third was Fifty Shades Darker (2017). (Holy shit that is crazy)

Second Dakota Johnson movie to have a Hailee Steinfeld song in its soundtrack. The first was How to Be Single (2016), which also starred Steinfeld’s Pitch Perfect 2 (2015) co-star, Rebel Wilson.

To create Gia Matteo, Arielle Kebbel chose red well-manicured nails to represent the elegant control of her character. As seen on The IMDb Show (2017). (WHAT? You reporting notes from your own goddamned fake show now IMDb? Get out of here! These notes are travesties).