We are Sklogpacking right across Europe and there is literally no other choice for the comedy entry in the cycle than the film for this week. Based on historical evidence this will either be an underrated comedy that he hold close to our hearts… or it will literally be the worst thing we’ve ever seen. That’s right! We’re watching Deuce Bigelow European Gigolo. Obviously watching this critically reviled sequel will involve a bonus viewing of the first film (generally thought to be bad, but at least better than the second film). The sequel took Rob Schneider to beautiful Amsterdam to attempt to figure out who was out killing Male Gigolos across Europe. If it can at least not be a lazy sack of shit then it should come out on top of Strange Wilderness… I’m not holding out hope. Also a reminder that we now have the European mapl.de.map up on the website if you want to check it out. Let’s go! 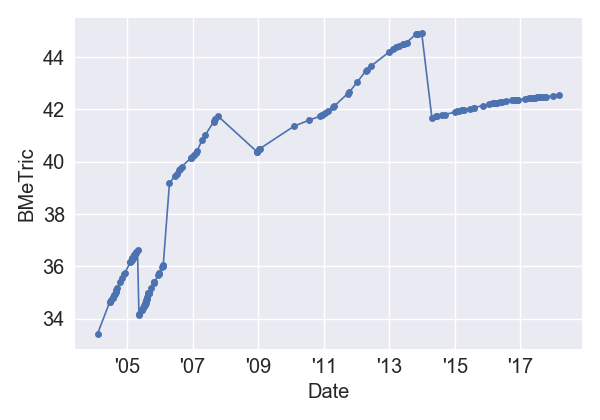 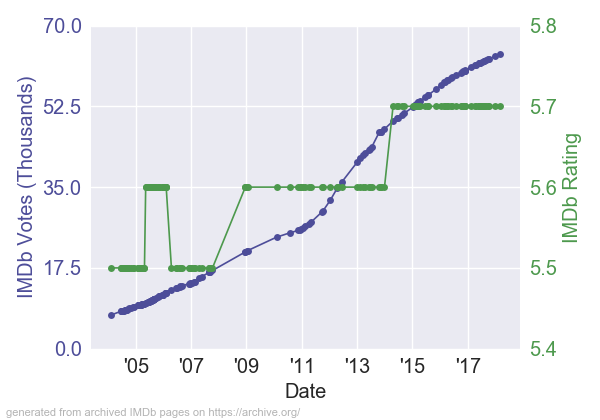 (Actually … nothing super interesting here IMO. Inflection at 2011, increasing rating as votes increase, 50K is right around where I expect, and so is the BMeTric. We’ve done it guys, we’ve analyzed bad movie IMDb plots so thoroughly that they are rote.)

Leonard Maltin – 2.5 stars –  Professional fish-tank cleaner breaks an expensive tank, and in order to pay for it becomes a gigolo. (Why not?) Potty humor and outlandish situations abound, but Schneider’s character is surprisingly likeable in this silly comedy. Marlo Thomas appears unbilled. Followed by a sequel.

(Oh … we know it was followed by a sequel. This is basically my attitude about the film going into it. It kind of has that Happy Gilmore / Billy Madison vibe to it. Innocuous enough if you can accept the very silly and immature humor. It is not really surprising it would end up with 2.5 stars from Maltin who seems fairly accepting of films just being films even without deeper meaning necessarily.)

(I love how they kind of had to show the gigolo (Antoine) hanging from the ceiling so that the way Deuce destroys the apartment with the same apparatus wouldn’t be confusing. This is also an incredibly long trailer, the entire part in the beginning with the killer Koi is completely useless. But, it also looks harmless enough.)

Directors – Mike Mitchell – (Known For: Trolls; Shrek Forever After; Sky High; The SpongeBob Movie: Sponge Out of Water; Future BMT: Alvin and the Chipmunks: Chipwrecked; Surviving Christmas; BMT: Deuce Bigalow: Male Gigolo; Notes: His two brothers launched an animation studio, which is probably why he mostly directs animated features at this point. That studio has gone bankrupt twice, and it doesn’t seem like he worked for them at all.)

Writers – Harris Goldberg (written by) – (Future BMT: I’ll Be Home for Christmas; Without a Paddle; BMT: The Master of Disguise; Deuce Bigalow: European Gigolo; Deuce Bigalow: Male Gigolo; Notes: He at one point was the number two ranked tennis player in Canada, and played John McEnroe in the Canada Open.)

Rob Schneider (written by) – (Future BMT: The Animal; The Hot Chick; BMT: Deuce Bigalow: European Gigolo; Deuce Bigalow: Male Gigolo; Notes: I cannot wait until we complete Rob Schneider’s writing credits. It seems like he started on SNL as a writer and converted to a player when Sandler and the rest of his crew joined in 1990.)

William Forsythe – (Known For: Once Upon a Time in America; The Rock; Dick Tracy; The Devil’s Rejects; Raising Arizona; The Substitute; American Me; Patty Hearst; Cloak & Dagger; City by the Sea; Extreme Prejudice; Hell’s Kitchen; The Waterdance; Lethal Vengeance; Weeds; Palookaville; Future BMT: Freedomland; Virtuosity; Hard Ca$h; Halloween; Out for Justice; Career Opportunities; Blue Streak; The Gun in Betty Lou’s Handbag; Loosies; Dead Bang; War on the Range; Things to Do in Denver When You’re Dead; BMT: Deuce Bigalow: Male Gigolo; Firestorm; 88 Minutes; Stone Cold; Notes: By far the best note about him is that he co-starred with two NFL players in his career, Brian Bosworth in Stone Cold and Howie Long in Firestorm … we’ve seen both of those movies!)

#28 for the Comedy – R-Rated Youth genre 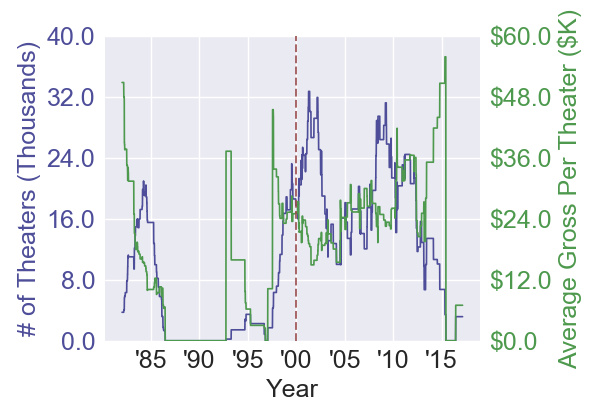 (Always an interesting category, mainly because it is a little confusing that Neighbors is on there but not the sequel … although I think it might be because the second was considered to be less of a frat house theme. Unclear. Anyways, two things, after the 80s boom died down the genre was somewhat relegated to direct-to-DVD. American Pie ushered in a new era, and then even after that Superbad / Knocked Up resulted in a second boom. The genre, I think, is once again relegated to VOD, although given teens still go to the movies a ton, some next-gen filmmaker will hit that feeling of going to high school in the early-2010s at some point. It’ll happen.)

Rotten Tomatoes – 23% (17/75): According to critics, Deuce Bigalow is just too dumb and filled with old, tired gags.

(Considering this is Rotten Tomatoes perhaps the “According to critics” part is a bit redundant. Like … who else would it be according to? This consensus could be made about 80% of the Happy Madison productions.) 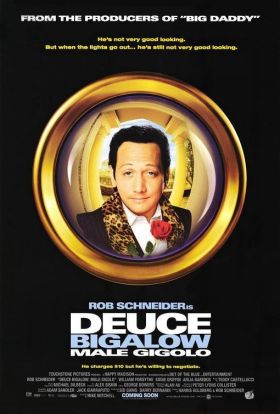 (I think this is a very clever poster. Artistically presents the entire premise of the film… ignoring the fact that the premise is incredibly thin. Some interesting font would have pushed to this A+ maybe.)

(This is a very long joke and probably not well used as a tagline. Gotta do better with a comedy film.)

(We are coming for you Crossroads. Although I don’t really recall that film being particularly objectifying of men. At least … not in the same way as Deuce Bigalow is. Hmmm … this is making me explore my biases and I’m growing as a person. Thanks Deuce Bigalow: Make Gigolo.)

Notes – Rob Schneider’s mother Pilar Schneider appears in the film as the woman he mistakes for his date in the Japanese restaurant. (Yeah, I think Rob Schneider is half Asian, which is a kind of ludicrous explanation for why he played an offensive stereotype in I Now Pronounce You Chuck and Larry).

In the scene where Deuce is walking with the tall woman and the phrase “freak” is shouted, the speaker of that line is actually Adam Sandler. Other than being a producer, it’s his only “credit” in the film. (Ugh)

The person who played the cookie girl was Rob Schneider’s daughter, Elle King. She would later go on to perform “Ex’s and Oh’s”, a song that received moderate airplay. At the time she was named Elle Tanner Schneider. (What the fuck, that song is pretty famous: https://www.youtube.com/watch?v=0uLI6BnVh6w )

Even though Norm MacDonald was not in the official credits, he was given credit in a roundabout way at the end of the movie. A clip was shown of him as a bartender saying that Norm MacDonald only worked one day on the movie.

The exterior of the house that Deuce Bigelow is leaving with the giant woman is the same as the one used on the TV show Charmed (1998). (FUN FACT)

Although spelled differently, the name “Berguita” (Kate’s roommate) is a Spanish slang word for “little penis”, this being referred several times by William Forsythe’s character

When Deuce first meets Antoine and sees his weapon collection, Deuce says, “I collect Canadian quarters . . . I got about six of them”. After his first “job” when he goes to the bar, his bill totals $11.50. He gives the bartender (an uncredited Norm MacDonald) “Ten, and six quarters”, presumably his Canadian quarter collection and the total take from his first “job”. (Yeah I did notice this, but also expected Norm to say that those were Canadian and wouldn’t be accepted).

The game that Deuce and Ruth are attending was between the Anaheim Angels and Cleveland Indians. (I love this stuff. Mapping out the “facts” about a movie. I but you could pin down an exact-ish date using this, the entire film takes place in a three week span in which the Angles and Indians plays in Anaheim).

The girl in the pet shop was also in Sorority Boys and unknowingly shows her breasts through a wet shirt in that film as well. (Jesus Christ, I’m done)