While under the control of the reverse Amnimals machine we are reduced to our basest instincts. Watching grown men panic about being gay is suddenly hilarious and it seems we may be doomed for all eternity to watch Meet the Spartans on an infinite loop. Noooooooo! Hungry from laughing so much, we order in what we crave: delicious $5 footlongs from Subway. The patented Subway flavor crystals hit our lizard brains and the Amnimals machine is destroyed. Hooray! We are back to our super twin ways! We slam a couple Bud Lights and chase down the Obsidian Dongle with our Budweiser super speed. With the Dongle in hand we take the quickest way out of there: our personal fighter jet. Hope everything works out and this is a totally incident free flight back to the US. Hmmm, should be alright to take this flight out of Greece straight through Bosnian airspace. What could go wrong? That’s right! We’re going Behind Enemy Lines for the final stop on the backpacking tour. This takes place in Bosnia & Herzegovina and will serve as a transition to the next cycle called Mind of a Madman, where we try to watch films produced by the same people as the films we’ve inducted in the BMT HoF. Behind Enemy Lines was produced by John Davis, the same person who made Norbit (believe it or not). I’m excited. Let’s go!

(A rating of 6.4 is actually quite good. It seems like it wants to end up on the other side of 6.5 even. The BMeTric successfully identifies this as borderline BMT, which matched with the Rotten Tomatoes score. A BMeTric of 20 is I think something like a 35 quartile, definitively below the median value.)

Leonard Maltin – 2.5 stars –  A cocky naval airman is shot down behind enemy lines in Bosnia and his commanding officer is unable to rescue him because of political constraints. Action yarn delivers a lot of excitement, but a hyperactive camera may produce motion sickness in some viewers. The corny finale seems to have come from a lesser-grade Hollywood movie of decades past. Followed by a direct-to-video sequel and a direct-to-DVD sequel.

(If you look at John Moore’s note below I already am rather excited about that quick edit style that is being promised. At the time it might have actually been ahead of its time considering Jason Bourne wouldn’t come out until the next year.)

(This soundtrack is going to be off the chains, and the camera work does indeed seem bonkers judging from the trailer. I love Gene Hackman though. Straight up.)

Directors – John Moore – (Future BMT: The Omen; I.T.; Flight of the Phoenix; BMT: A Good Day to Die Hard; Max Payne; Behind Enemy Lines; Notes: Wow all of his films are below 40%. Irish, he is known for a quite edit style, which I’ll like to see showcased in this film.)

David Veloz (screenplay) – (Known For: Natural Born Killers; Permanent Midnight; BMT: Behind Enemy Lines; Notes: Weirdly appeared in the news recently when he was quoted as saying Oliver Stone was “sexist and cruel” and Stone himself made news by defending Harvey Weinstein.)

Actors – Gene Hackman – (Known For: Superman; The Royal Tenenbaums; Young Frankenstein; Unforgiven; Superman II; The Replacements; Bonnie and Clyde; Mississippi Burning; Crimson Tide; The Birdcage; Enemy of the State; The Firm; The French Connection; No Way Out; The Conversation; Antz; A Bridge Too Far; Wyatt Earp; Runaway Jury; The Quick and the Dead; Future BMT: Loose Cannons; Two of a Kind; All Night Long; BMT: Superman IV: The Quest for Peace; Welcome to Mooseport; The Chamber; Behind Enemy Lines; Notes: Considering he retired after Mooseport, we really could finish off his filmography really easily. Loose Cannons looks awful.)

Owen Wilson – (Known For: Wonder; The Grand Budapest Hotel; Cars 3; Fantastic Mr. Fox; Inherent Vice; Cars; Wedding Crashers; The Royal Tenenbaums; Meet the Parents; Midnight in Paris; Zoolander; The Life Aquatic with Steve Zissou; The Darjeeling Limited; Night at the Museum; Night at the Museum: Secret of the Tomb; Night at the Museum 2; No Escape; Bottle Rocket; Marley & Me; She’s Funny That Way; Future BMT: Anaconda; Breakfast of Champions; How Do You Know; Little Fockers; You, Me and Dupree; Are You Here; Drillbit Taylor; Masterminds; Hall Pass; Father Figures; Free Birds; Cars 2; Meet the Fockers; The Internship; Armageddon; BMT: Zoolander 2; The Haunting; Marmaduke; I Spy; Around the World in 80 Days; Behind Enemy Lines; Razzie Notes: Nominee for Worst Supporting Actor, and Worst Screen Combo for Zoolander 2 in 2017; and Nominee for Worst Screen Couple in 2003 for I Spy; Notes: There was a point in time in which Owen Wilson was doing kind of half-funny action-y films. Like Anaconda, The Haunting, and this. This can out right after Shanghai Noon though, so I wonder if it was just a holdover as Wilson was trying to find his niche.)

Gabriel Macht – (Known For: Love & Other Drugs; The Good Shepherd; The Recruit; The Object of My Affection; A Love Song for Bobby Long; Grand Theft Parsons; A Bag of Hammers; The Adventures of Sebastian Cole; Future BMT: The Spirit; Whiteout; Bad Company; Simply Irresistible; Middle Men; BMT: Because I Said So; American Outlaws; Behind Enemy Lines; Notes: Star of Suits and son of Stephen Macht who was a 70s / 80s character actor, especially for bit parts on television shows.)

(Decent return. You’d think they were looking to get closer to $100 million domestic for an action feature at the time. Came out right after 9/11 though (November 2001), so I wonder if that dampened its return a bit.)

#15 for the Pilot / Aircraft genre

(You might be tempted to try and match these to wars, but in reality it looks like it is just a wave pattern. The production of “airplane” movies just happened all at once every five years or so. Possibly it matches better with technology involving aviation filmmaking equipment? Left Behind and Stealth are the other BMT examples, and this made the most of any we’ve seen. The number one film, Pearl Harbor, does qualify though.)

Rotten Tomatoes – 37% (48/130): The plot for Behind Enemy Lines is more jingoistic than credible, and the overload of flashy visual tricks makes the action sequences resemble a video game.

(Pretty close to 40%, but I am excited to see (1) slo-mo running, (2) the apparently ridiculous soundtrack, (3) jingoistic nonsense. Sounds like a nice Saturday afternoon honestly. Reviewer Highlight – A piece of junk. – Richard Roeper, Ebert & Roeper; I just love how terse it is, right to the point.)

Poster – Behind Enemy Sklogs (A+) 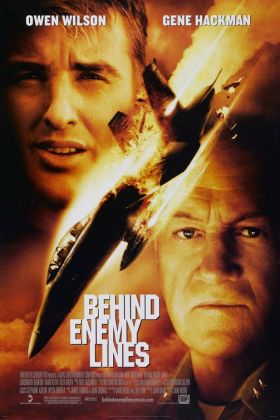 (That. Is. The. Best. I actually have goosebumps. I don’t even care that it has shit font. That’s an A+. Wooooooooooo! America!)

Tagline(s) – In War There Are Some Lines You Should Never Cross. (C-)

(Interestingly I don’t think “enemy lines” count as lines that should never be cross… maybe just not accidentally and without a plan/backup. This tagline is a sham! Also this is too long.)

(What a strange group of films. I am quite excited for DeepStar Six though. Should be a very interesting, especially since it is a submarine film (shout out to Jamie’s podcast Submersion, which is all about submarine films).)

Notes – In the football scene, the filmmakers actually tried to have the catapult shuttle kick the football off. Unfortunately, the shuttle completely obliterated the ball, forcing a Navy Master Chief to just chuck the ball in the air for the desired shot. (hahahaha)

The film is based loosely on the experiences of USAF Capt. Scott O’Grady, who was shot down near the town of Mrkonjic Grad in northern Bosnia in June 1995 and was stranded in Serb-held territory for six days before being rescued by US Marines. O’Grady brought a lawsuit against 20th Century-Fox for damages to his character. He claims he didn’t curse as much and never disobeyed orders. (lol, they settled)

Director John Moore was nearly killed in the scene where the tank busts through the wall. He was pulled away by a stuntman just in time.

This is the first movie to feature the US Navy’s new F/A-18E/F Super Hornet. (this is the kind of shit I come for right here)

Owen Wilson jokes that most of this movie was creating “a bunch of ways to make running dramatic.” (Almost definitely)

In the initial flyby scene of the aircraft carrier the deck crew can be seen standing in a long line across the deck. This is part of the beginning of flight operations as they search for any objects lying around on the flight deck (e.g. screws, bolts, trash, etc.) that could be sucked in the aircraft’s intake during takeoff.

The production made all of the snow out of paper. At the time of filming, it was the first winter in 104 years that it hadn’t snowed in Slovakia.

The whole town of Hac is a set, built for the movie

Coca-Cola did not pay for its product placement in the movie. (Good to know before I make fun of it in a week)

The US Navy ship used is the USS Carl Vinson (CVN 70), which has been used in several other films. (yiiiiiissssssss)

None of the actors playing Serbians were actually Serbian; the producers said that they hired Croats as interns and instructors to teach the actors the Serbian language, because they couldn’t find any Serbs willing to work on the film due to perceived anti-Serb sentiment shown in the film. (Huh that is pretty interesting)

The SAM missile system shown in the film is the 9K35 Strela-10 firing the 9M37M missile. It uses an electro-optical guidance, laser proximity fusing and triple channel guidance system. However, its range is only 5 km and it can only intercept up to 3,500 metres (10,600 feet).

According to the beginning of the movie, the “Cincinnati Accords” ended the war in Bosnia. This treaty is loosely based on the real-life Dayton Agreement that ended the war in late 1995. Ironically, the “Cincinnati Accords” required NATO forces to withdraw from Bosnia, while the real-life Dayton Agreement allowed a large NATO force to be sent to Bosnia to help ensure the peace deal. (Wait … they made up a treaty?)

Some of the flashback footage that’s used is from the Bosnian War movie Savior (1998). (Nice, I love some stock footage facts)

One scene had to be changed because the Department of Defense objected to a two-star general like Reigart leaking information to the press. (I love that the studio gave in too, this kind of stuff seems to happen a lot)

The heat images of soldiers are actually one guy walking around holding a broomstick.

Gene Hackman came up with the idea for Reigart to smoke so he would have a weakness. (hmmmm I like that)

Most of the helicopters in the movie are from the Slovak Air Force, but the rescue choppers are American-made.

The producers had complete cooperation from the US Department of Defense. For one scene, they even turned around the aircraft carrier so the crew could get the right shot. (Explains the above note, unless you are tricky you need cooperation to get that shot)

The jet scraps are actually two old Soviet MiG 21s that the production bought for $5,000.