This film was watched as a BONUS along with Police Academy 2: Their First Assignment. Look for that preview for the continued adventures of the Bad Movie Twins. 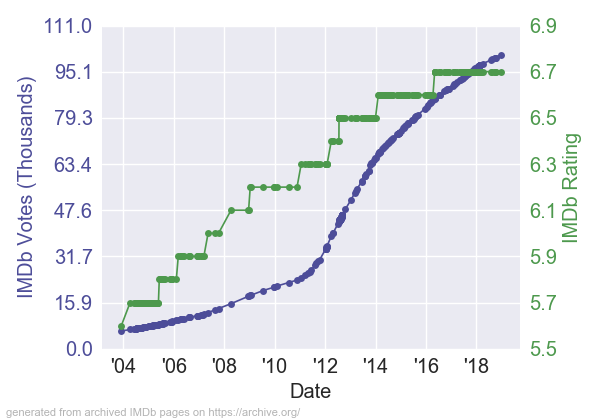 (Wow dropped from a 30 BMeTric to a sub-15 which is crazy. Why are people all of a sudden thinking this film is funny? Guttenberg is charming perhaps, but genuinely funny? I find it hard to believe.)

Leonard Maltin – 2.5 stars –  Generally good-natured comedy (with typical ‘80s doses of sexism and tastelessness) about a group of weirdos and misfits who enroll in big-city police academy. Winslow’s comic sound effects are perfect antidote for slow spots in script. Followed by far too many sequels, a TV series, and an animated TV series.

(I think this is generally the accepted belief. Winslow and Guttenberg are both serviceable with Winslow’s machine gun sound effect stealing the show at times. Glad he shouted out the sexism and junk, it is fine that that was what the 80’s was like, but we can acknowledge that that shit ain’t funny anymore. Amazing homophobia though as well, gay panic up the wazoo.)

(That is basically it. A series of 80s slapstick vignettes with no real discernible story. Have fun.)

Hugh Wilson (screenplay) – (Known For: Blast from the Past; Guarding Tess; Future BMT: Stroker Ace; Burglar; Down Periscope; BMT: Dudley Do-Right; Police Academy; Notes: There is a claim on IMDb that he has a screenplay that is going to be produced that is about the first police force assembled in the Middle Ages with an alternate title of Police Academy: 1123… chew on that.)

Kim Cattrall – (Known For: Big Trouble in Little China; Sex and the City; The Ghost; Star Trek VI: The Undiscovered Country; Ice Princess; Masquerade; The Return of the Musketeers; Rosebud; Above Suspicion; Meet Monica Velour; Ticket to Heaven; Midnight Crossing; Future BMT:Sex and the City 2; Mannequin; 15 Minutes; Porky’s; Unforgettable; Turk 182; Live Nude Girls; BMT: Crossroads; Baby Geniuses; The Bonfire of the Vanities; Police Academy; Razzie Notes: Winner for Worst Actress for Sex and the City 2 in 2011; and Nominee for Worst Supporting Actress for The Bonfire of the Vanities in 1991; Notes: Do yourself a favor and read her IMDb trivia because it’s bonkers. I’ll just note that it claims she was one of the last actresses to work on a studio contract. Which is a little nuts.)

#6 for the Comedy – Bumbling genre 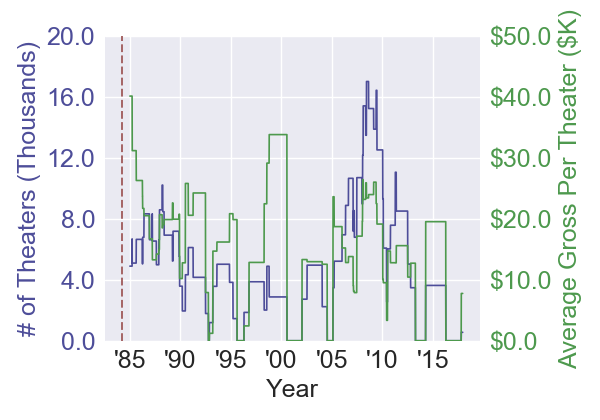 (This thing beats out modern Kevin James films like Paul Blart 2! That is crazy! It was made in 1984, once you adjust for inflation this must be one of the highest grossing bumbling comedies ever!)

(Juuuuust on the border. It actually just fell below the threshold after they added the Roger Ebert review in April. Given it was a pure 0-star Thumbs Down I suppose it is appropriate it finally gets its due. Reviewer Highlight: Now comes without any doubt the absolute pits of this genre, the least funny movie that could possibly have been inspired by Airplane! or any other movie. – Roger Ebert, Chicago Sun-Times.)

Tagline(s) – The new police recruits. Call them slobs. Call them jerks. Call them gross. – Just don’t call them when you’re in trouble. (C)

What an institution! (B-)

(Obviously the first is just too long to give a decent grade. Can’t do it. But I like the repeat of “call” and it ends on a clever note. The second isn’t the most clever, but it is short and sweet with a slight double entendre. So best of the bunch.)

(Fun fact: Police Academy 3 doesn’t even qualify … yet. At some point they’ll add some extra review to move it down again. I actually assume that in about 3 years the BMeTric for Police Academy 3 will plummet, given that is what is happening to all the other Police Academy films.)

Notes – Director Hugh Wilson stated that when it came time to film the driving scene with Hightower at 4:30 a.m., the actor originally cast as the angry driver was found passed out drunk in the trailer, so Hugh himself ended up playing the role of the angry driver, into whom Hightower crashes.

In addition to playing Jones, Michael Winslow also supplied the voice for all public address announcements heard at the academy. (Fun Fact)

Producer Paul Maslansky got the idea for this movie during the production of The Right Stuff (1983). A group of police cadets arrived to help with crowd control for the filming of a street scene. When the cadets piled out of the buses to take their posts, they were diverse; men, women, tall, short, black, Asian. They did their jobs so terribly, that Maslansky found it humorous, asking the sergeant, “Are these all going to be future San Francisco’s finest?” The sergeant told him “We have to take anyone who applies into the academy for training–but we can flunk them out in two weeks.” It started Maslansky thinking, “What if they don’t want to be flunked out? What if some guy or girl wants to stay in?” That night, Paul wrote a two-page treatment and gave it to executive producer Alan Ladd Jr., who loved the idea and agreed to develop the movie. (That is pretty awesome. Basically how old Hollywood used to work, just randos writing treatments and making boatloads of cash.)

The location used as the Academy campus was known as the Mimico Lunatic Asylum or variations thereof until 1911, and Lakeshore Psychiatric Hospital from 1964 to 1979. It was acquired by Humber College in 1991, after being mainly used as a site for filmmaking between 1979 and 1991. It is now a renovated and active educational institution. (Fun Fact)

In the DVD “Making of” documentary, Marion Ramsey says she came up with Hooks’ voice by reading the description of her character in the script, and recalling the time she met Michael Jackson. The voice is a parody of Jackson. She also recalls that in the moment where Hooks exclaims “Don’t move, Dirtbag!” the sound techs were used to recording the “meek” voice and were surprised when she said the line so loud. (Huh, that is actually a lot more thought that I thought would have went into it)

The “shoe polish on the megaphone” originated from a prank played on British Director Michael Winner on the set of one of his movies. Hugh Wilson decided to use the gag, after he heard the story from a crew member. (Coooooool)

This is one of few films, to which Roger Ebert gave zero stars, but it was also a very rare zero-star review where Ebert didn’t castigate the film for being depraved or immoral or diseased (something he had made a point of doing in most zero-star reviews, such as those for “Caligula”, “I Spit on your Grave”, and “Death Wish II”. He just said it was a would-be comedy that not only had zero laughs but didn’t even try to make the audience laugh. (Ha)

Marion Ramsey was asked to wear a fat suit for her role as Hooks, with the idea that Hooks’ boot camp training would have rendered her slim by the end of the film. Due to time constraints, the scene showing Hooks after her weight loss was removed from the final cut. By the time work on the sequel began, producers changed their minds, opting instead to have Marion remain wearing the fat suit, in order to garner audience sympathy for her character. A brief shot of “slim” Hooks remains in the film, however, as a close-up of Marion without the fat suit is seen during the graduates’ march at the end of the film. (Whaaaaaaaaaaaaat?)

The only Police Academy movie that was given an R-rating, and also the most successful of the franchise at the box office.

The term “Tackleberry” has become a standard in the private security industry to denote an officer who is inordinately fond of firearms and other high-tech equipment. (Ha makes sense)

According to the cast and filmmaker commentary, it was Producer Alan Ladd, Jr. who came up with the idea of having Mahoney be the recipient of the “podium gag” at the end, after watching dailies of Lassard’s podium scene. (A very strange scene indeed)

Steve Guttenberg mentions in his biography, “The Guttenberg Bible”, that Donovan Scott filmed home-movies during filming. According to Guttenberg, there is a “very funny, touching, and unreleased documentary that he made of the shoot.”

Steve Guttenberg said of Mahoney in a 1984 interview, “I think he’s a party guy. He doesn’t really know what he is going to do with his life. But it is kind of hard to talk about him because he is not exactly a deep character. I really hate when actors get interviewed, and they have just starred in The Love Boat (1977) or something, and they go on for a month about motivation and character analysis. Police Academy set out to be light entertainment, and that is what it is.” (Boom. Roasted losers. Guttenberg is a gross but charming character which is probably the best part of the first two films)

Fackler’s wife riding the hood of her spouse’s car, to prohibit him from joining the police academy, (with Mrs. Fackler ultimately catapulted with an abrupt stop) was the start of a comedic tradition with the film series: The Parody On A Parody. Like so many gags, this one would be “recycled” for Police Academy 3: Back in Training (1986): Now, with Fackler riding the hood of his car to prevent Mrs. Fackler from joining the Force; complete with the couple being spotted from the interior of a limousine, as well as a hubcap coming off of the car as it backed out of the driveway. (Ooooof. Parody of a parody is terrible)

In the party scene, Tackleberry is seen to play the saxophone. In real-life, David Graf actually was an accomplished saxophone player. (There is no other reason he would)

This film is regularly played on television in the United Kingdom, during the Christmas period. The film’s only Christmas reference is the tune heard during Hooks’ driving test; “Santa Claus Is Coming To Town”. (HA, Secret holiday film?)

The role of Commandant Eric Lassard was also written with Leslie Nielsen in mind. (Uh you can tell)falign