A small note prior to this post: Last July we decided to take a look back at the movies that we watched over five years ago and choose a Hall of Fame class, five movies that we thought embodied BMT in some way. Perhaps they were particularly bad, or an example of a specific bad movie trope, whatever, something made them stand out as special in our minds. Since we didn’t do email previews before 2013ish we also decided to provide a preview for the movie. This is the first in a series of five leading up to our yearly awards the Smaddies Baddies. A recap (Hall of Fame speech really) will follow immediately afterwards to explain why the movie was chosen, things we loved about the movie, and things we discovered upon second viewing. Enjoy! 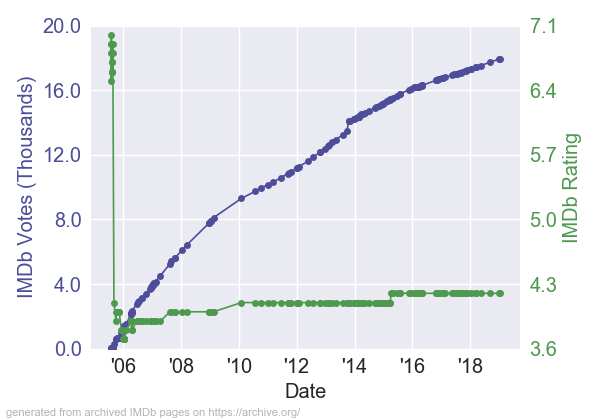 (Oh those sweet summer children who gave this good reviews initially. It is a bit shocking that it is that high actually. The CGI alone I would have imagined would have dropped it into the 3’s.)

Leonard Maltin – 1.5 stars –  In Chicago, 2055, a company takes expeditions back in time to hunt dinosaurs. Precautions are taken, but (of course) something goes wrong, and a tiny change in the past sends alterations down through time that our heroes try to set right. Misguided expansion of Ray Bradbury short story with mediocre effects and a confusing script. It’s easy to see why this stayed on the shelf so long. Filmed in 2002.

(“Mediocre effects” is extremely kind even in 2005. Final Fantasy: Spirits Within was released in 2001 and this is like … five years prior to that level of quality. And they had full creates in CGI. It is too much. It just look like garbage. It sat on the shelf, I believe, because they were trying to finish the really bad looking CGI.)

(The beginning is pretty crazy. I understand why they put it in there, but that isn’t part of the film. And weirdly the CGI doesn’t look that bad in the trailer. Which makes sense, you’re trying to trick people into seeing the film.)

Directors – Peter Hyams – (Known For: 2010: The Year We Make Contact; Stay Tuned; Sudden Death; Outland; Timecop; Capricorn One; Running Scared; The Star Chamber; The Presidio; Enemies Closer; Hanover Street; Narrow Margin; Future BMT: The Musketeer; End of Days; The Relic; Beyond a Reasonable Doubt; BMT: A Sound of Thunder; Razzie Notes: Nominee for Worst Director for End of Days in 2000; Notes: One of the few writer/directors of major films who also serves as his own cinematographer.)

Writers – Ray Bradbury (short story) – ((Known For: Fahrenheit 451; Moby Dick; Something Wicked This Way Comes; King of Kings; It Came from Outer Space; The Illustrated Man; The Beast from 20,000 Fathoms; The Wonderful Ice Cream Suit; Future BMT: Fahrenheit 451; BMT: A Sound of Thunder; Notes: A close friend of both Ray Harryhausen (who was best man at his wedding) and Gene Roddenberry. Perhaps the greatest American Science Fiction writer.)

Actors – Edward Burns – (Known For: Saving Private Ryan; The Holiday; 27 Dresses; She’s the One; The Brothers McMullen; Friends with Kids; Confidence: After Dark; The Fitzgerald Family Christmas; Sidewalks of New York; The Groomsmen; Newlyweds; Future BMT: Life or Something Like It; Echelon Conspiracy; 15 Minutes; Man on a Ledge; Ash Wednesday; No Looking Back; BMT: One Missed Call; A Sound of Thunder; Alex Cross; Notes: Has a brother Brian Burns with whom he owns a production company called Irish Twins … presumably because they are, in fact, brothers born within a calendar year.)

Catherine McCormack – (Known For: Braveheart; 28 Weeks Later; Spy Game; Dangerous Beauty; Shadow of the Vampire; Magic in the Moonlight; The Tailor of Panama; The Journey; The Land Girls; Strings; Renaissance; Dancing at Lughnasa; Born Romantic; Future BMT:The Weight of Water; BMT: A Sound of Thunder; Notes: A British actress who appears to have more recently been performing in the theatre, including work with the Royal Shakespeare Company.)

(A truly catastrophic bomb. As a matter of fact, if you dug into it, it might actually be one of the worst box office bombs in history, or at least since 2000)

#78 for the Creature Feature genre 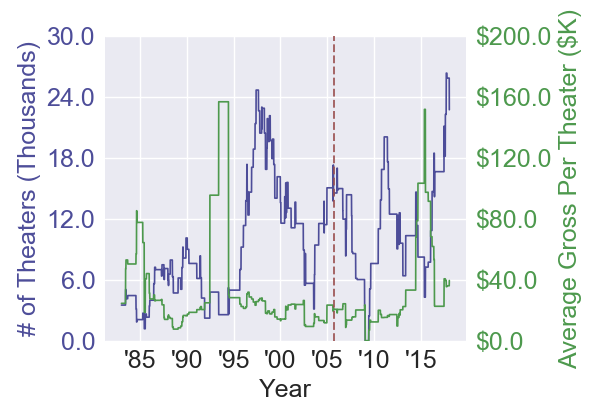 (The lowest grossing film we’ve done in the genre. After this it is pretty obvious everyone looked around at each other and said “yup, that’s about enough of those for now, we should wait a bit before tricking people into watching more of these.”) 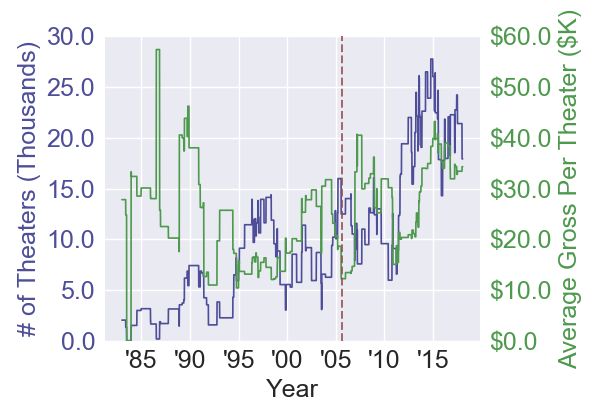 (2012 is by far the most successful BMT film of the genre. It has blown up since 2010, plausibly because we still are in a dystopian kick. I’m surprised Hunger Games doesn’t qualify as Near Future as I wouldn’t be surprised if that is what actually kick started things in 2012.)

#48 for the Time Travel genre

(Only Timeline and this amazingly. There are plenty in the future though (heyyyyooooo, get it?). Unfortunately Timecop doesn’t qualify, but we do get to watch The Time Machine again …)

Rotten Tomatoes – 6% (6/99): Choppy logic and uneven performances are overshadowed by not-so-special effects that makes the suspension of disbelief a nearly impossible task.

(Somewhat oddly most of the reviews don’t seem to mention the special effects. Which makes me wonder if they actually watched the film. It is literally the craziest thing you’ll see (unless you watch hundreds of bad films … it is still top ten craziest thing I’ve seen in a BMT film, no joke). Reviewer Highlight: So perfect in its awfulness, it makes one seriously consider a theory of unintelligent design. – Scott Brown, Entertainment Weekly)

(I hate the font. It looks super silly and I don’t think it gets across anything important about the film. The red hand and butterfly is interesting, although perhaps feels more like a horror film? I’m giving it the benefit of the doubt. I like the style outside of the writing, so I’ll go above average for it., even if it looks a bit cheap)

Tagline(s) – Some Rules Should Never Be Broken. (D)

(First, it sounds like a tagline, but it isn’t. It is a tautology. Of course there are rules that should never be broken. They are rules. Second, what is even the rule being broken here? The butterfly effect rule? The sound of thunder rule? Neither. The actual rule broken? Don’t turn off the biofilter on your time machine … yeah, I’m not sure the tagline is getting that across. But it sounds nice, so it isn’t an F.)

(The Seeker doesn’t have time travel according to Box Office Mojo, but whatever. Teenage Mutant Ninja Turtles III though, now that is a ridiculous and pointless film.)

Notes – Renny Harlin was fired from the production, because he made a creative decision that made Ray Bradbury very unhappy, and this film’s producers decided to support Ray Bradbury.

One major reason for the film’s long delay is that the original production company went bankrupt during post-production, and there simply wasn’t money to finish the film. (Which is why the CGI is absolutely the worst thing you’ll ever see)

Production was slowed when severe floods in the summer of 2002 in the Czech Republic caused considerable damage to the set.

This film was originally set for release in 2003.

When Hatton (Ben Kingsley) receives his clients after their time safari, he likes to compare them with great explorers: Marco Polo, Columbus, Armstrong… and he also says “like Brubaker on Mars”, remembering a future (past for him) conquest of the Red Planet. Brubaker was the name of the commander of the Mars expedition in the film Capricorn One (1977), also directed by Peter Hyams. (Whaaaaaaaaaaaaaaa?)

Pierce Brosnan and director Renny Harlin were originally attached to this film. (See above note about Harlin)

The film takes place millions of years in the past and in 2055. (I can’t wait to see if that 2055 is made explicit, I honestly cannot remember)

A video game based on the film was released for the Game Boy Advance. It also had been considerably delayed, and ended up coming out slightly before the film, in March 2005. It was an overhead shooter with some driving stages, and included support for co-op and deathmatch multiplayer via link cable. A third-person action-adventure shooter based on The Thing (2002) engine was being developed by Computer Artworks for BAM! Entertainment for the PlayStation 2 and Xbox, but ended up being cancelled. Its plot differed from that of the film: the changes in the course of evolution were not an accident, but acts of terrorism caused by a Luddite cult. The “present” time was also changed to 2038. The game was to have nine missions taking place in both the past and present. Real-life bands would have been hired to provide the music. (I have to definitely never play that game because that would be a huge waste of time)

The change in the timeline is caused by a single butterfly. This probably alludes to the so called “butterfly effect” in which a small change in one state of a system can result in large differences in a later state.