Patrick and Jamie start their police careers on Predator patrol. What a joke, right? “If I wanted to chase after aliums I would have joined the Alium Brigade” Jamie says resulting in a chuckle from Patrick. Just then a Predator ninja flips from the shadows and rips a civilian in half. “Jesus Christ!” yells Patrick and they are on the chase. Using their knowledge of the city and their extraordinary endurance, they just barely keep up with the greatest predator the universe has seen. Suddenly the Predator finds itself cornered and Patrick and Jamie pull out their guns. “Freeze, dirtbag,” Jamie says, but as they ready to make the arrest a strong gust of wind knocks the guns from their hands. With that the Predator is upon them and it spells certain doom for our heroes. Suddenly Jamie notices a distinctive birthmark on the mandibles of the Predator. “Wait… Predator? Is that you?” Recognition alights in its eyes. Of course. This must be the same Predator Jamie zoomed across the universe with just months ago. “But Predator, last time I saw you you were slamming Tacoz Fritos Mountain Dew and doing X-treme stuff… killing us isn’t X-treme. Ripping civilians in half isn’t X-treme. What happened?” The Predator looks ashamed and shrugs. “You know what is X-treme?” Jamie asks and the Predator looks up hopeful. “The most X-treme adventure of them all… death.” Jamie holds his breath. Could this really work? Did he want it to work? But he knew it was the only way. Recognition shows in the Predator’s eyes. It nods and pulls out an intricately carved puzzle box. Jamie and Patrick look at each other in horror, “What the fuuuuuuuuuuu…” That’s right! We’re watching the Hellraiser franchise… literally. There were four Hellraiser films released theatrically, and more or less people accept this as the original quadrilogy with the many straight-to-DVD films that followed considered separate. The fourth is the only one that qualifies for BMT as they steadily got worse reviews until arriving at the film that would stop the franchise in its tracks. The trailer is amazing and it’s one of the few BMT qualifying Alan Smithee films ever. I’ve gotten pretty hyped about it. Let’s go! 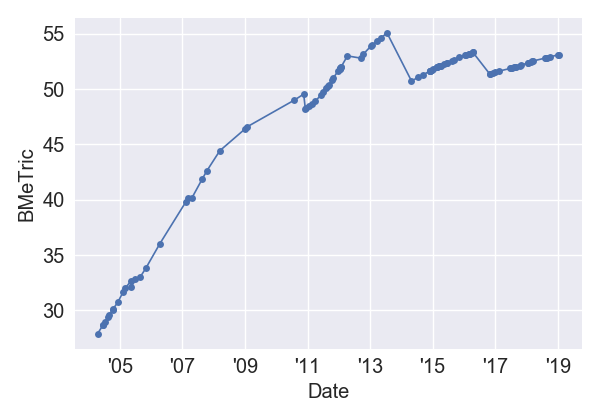 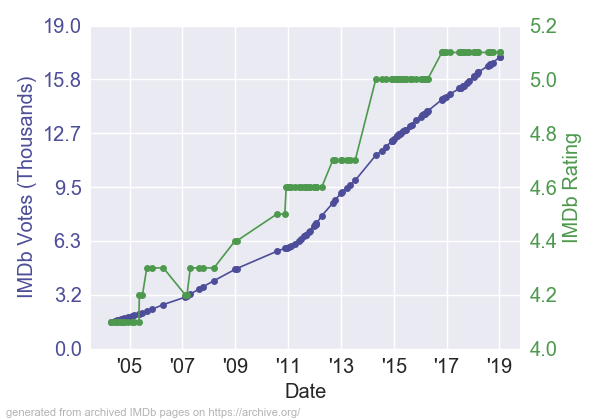 (I shouldn’t be surprised anymore that these things start absurdly low and then rise steadily over time. Horror films have finicky fans so they slam the films which then have nowhere to go but up as general audiences get ahold of them. 50+ and holding steady, so good enough for me.)

(The other films in the series went 2.5, 1.5, and 1.5, so none of them really were well received by Leonard. I guess not a giant surprise since Leonard notoriously hates horror films.)

(Oooof. That looks like a load of shit. The laser beams. The period pieces. The “Welcome to oblivion” at the end. It is exactly what you expect but don’t want in a horror mega-franchise of the time. Can’t wait.)

Directors – Kevin Yagher – (BMT: Hellraiser IV: Bloodline; Notes: Renowned make-up artist famous for Tales from the Crypt which is where he started directing. His older brother was in the second and third Atlas Shrugged films.)

Valentina Vargas – (Known For: The Name of the Rose; The Big Blue; La Noche de Enfrente; BMT: Hellraiser IV: Bloodline; Notes: Born in Chile, raised in France, she is trilingual and has played parts in French, Spanish and English.)

(That is weirdly fine. I mean, it isn’t a lot of money, but it cost almost nothing apparently, so … weirdly fine.) 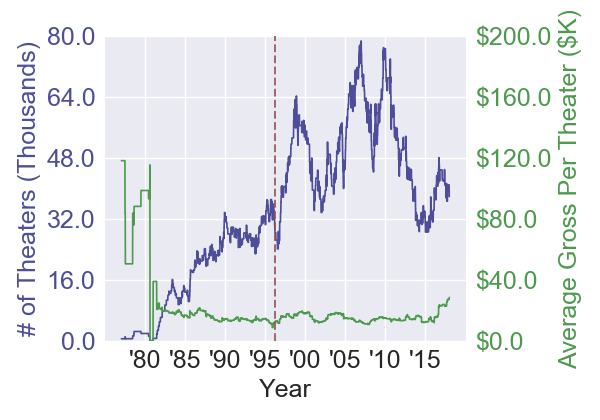 (Just watched by far the most lucrative BMT film in the The Nun. This genre has transcended its roots and, like action films, can basically print money at this point. And to think that PG-13 horror used to dominate the genre.)

(The only Hellraiser film that qualifies as, from this point forward they aren’t released in theaters, and previously they were too well received, making it a rarity among horror mega-franchises. Reviewer Highlight: Except for the most undiscriminating gorehound, pic is a pointless mess. – Daniel M. Kimmel, Variety) 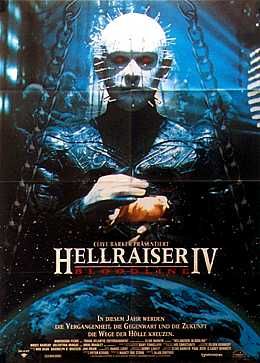 (That’s actually pretty good… other than the Earth at the bottom that screams “this movie may or may not be set in space and is thus almost certainly super lame.” They needed to do a little more with the font too.)

Tagline(s) – This year, the past, the present and the future will all meet at the crossroads of hell. (D)

(The poster technically doesn’t have a tagline, but one of the alternates does so I’ll let it slide. If only to say that this one sucks. It’s too long and the “This year” makes it real clunky and hard to even think about.)

(Been obviously smashing these. The Dalek one is crazy as that is surely a Doctor Who television movie no? Pretty nuts it manages that high of a BMeTric, but then again I guess there aren’t many films with the keyword.)

Notes – Walt Disney Pictures came under fire in the media when they purchased the then controversial and hip Miramax Films. The initial slate of films that Miramax would be releasing under the Disney deal included Hellraiser: Bloodline, Scream, The Prophecy, Halloween: The Curse of Michael Myers and Mother’s Boys. The outcry was due to the fact that Disney would be directly involved in the marketing and release of horror movies.

The US theatrical 1-sheet for the film does not have any credits. This was because original director Kevin Yagher had his name removed and replaced with the Directors’ Guild of America pseudonym Alan Smithee. Fearing this would negatively reflect on the quality of the film, Miramax opted for a credit-free 1-sheet. (Actually a good choice, I wouldn’t even notice)

Adam Scott was grateful for getting cast, citing the film as being a huge deal for booking a real movie, which he took very seriously. He remarked that on his first day to the set, he was shown his chair that was mistakenly labeled as Adam Craig. Scott said it was a nice welcome to Hollywood. Despite the film’s troubled production and box office failure, Scott didn’t care as long as he was working. Later in need of work, Scott even auditioned for the sequel with the hope that the casting directors wouldn’t remember him from the last film and no one said anything at the audition. However Scott suspects someone remembered him as he wasn’t hired for the sequel. (That is awesome)

Editor Randolph K. Bricker was brought in by Joe Chappelle (who was Miramax’s replacement for original director Kevin Yagher) to assemble a completely new cut of the film. This version was the one that was ultimately released in theaters in 1996.

The last “Hellraiser” movie to get a theatrical release. (Ayup)

Though promotional photos of Aristocratic Cenobites wearing white powdered wigs were released in various sci-fi magazines to promote this film, the Cenobites were cut from the finished film, along with Demon Clowns and an entire ballroom fancy dress party as the studio wanted to get to Pinhead’s story sooner.

Was intended to be the final installment of the “Hellraiser” franchise, ending with Pinhead destroyed once and for all. 5 direct-to-video sequels followed. (Whoops)

In the Hellraiser films and their legacy, author Paul Kane described his screenplay as ambitious and “one of the best Hellraiser sequels.” The screenplay featured a linear timeline, more special effects, and violent confrontations between Pinhead and Angelique. When Miramax was unwilling to provide a budget to realize the scenes, the film was scaled back. Stuart Gordon, known for his low-budget horror films, was approached to direct but backed out after artistic disagreements. Special effects technician Kevin Yagher was subsequently hired after his cost-saving directing work on Tales from the Crypt for Joel Silver. Yagher was initially hesitant about taking the job, as he did not want to do a retread of the previous installments of the series. However, he was impressed with the script and became enthusiastic after Barker describe his vision for the film. (Awwww, and then he declined to even put his name on it in the end)

Clive Barker acting as executive producer, wanted a fresh turn for the series after two sequels to his original 1987 film. The initial premise for the film, a shape-changing structure used to trap Pinhead, was inspired by the ending of Hellraiser 3 which featured a building whose architecture resembled the Lament Configuration. Barker suggested a three-part film set in different time periods, and Peter Atkins added the Lemarchand storyline, going back to Barker’s novella. Atkins had previously written Hellbound Hellraiser II (1988) and co-written Hellraiser III: Hell on Earth (1992) Atkins and Barker pitched the idea to Miramax who greenlit it without requiring an outline.

Gary J.Tunnicliffe of Image Animation, who had previously worked on Hellraiser III:Hell on Earth (1992) was recruited to perform special effects. Tunnicliffe was worried that director Kevin Yagher would want to perform the effects himself, but Yagher wanted to collaborate with Image Animation and believe their experience with prior films in the series would be valuable. Kevin Yagher only contributed to the Chatterer Beast.

The word Cenobite means a member of a monastic order.

Kevin Yagher: disowned the version with cuts made behind his back due to conflicting artistry ideas. Yagher’s version contained much more graphic imagery, plot, and explained everything that happened in the film. The producers disagreed and demanded Pinhead should appear sooner despite every version of the script up until then having him appear around the 40-minute mark. When Yagher was unable to satisfy he disowned it and never finished filming some final scenes. Joe Chappelle was brought on to finish the film, filming new scenes from re-writes including the narrative framing device. Some scenes of the original script were thus never shot. Joe Chappelle was the studio’s first choice to direct the film, and actually agreed to direct Halloween: The Curse of Michael Myers (1995) on the understanding that he’d be allowed to direct this film (which he was more interested in) next, but eventually declined the offer due to feeling burned out after the troublesome production of that film. (Wowza, I didn’t realize Halloween and Hellraiser had that connection)