Sergeant Godzilla roars with anger at Officer Fultz, who simply scoffs and asks if he can go. He’s got some actual bad guys to stop with lethal force and no time for pencil-pushing bullshit. “RAWR, not till you tell me why you broke all those rules last week. And who are these two bozos with you?” Fultz looks back at Jamie and Patrick, “Just some scum I caught littering in the dead zone.” Godzilla seems taken aback, “The dead zone, huh? Get outta here you rule-breaking nogoodnik and don’t let me catch you breaking any more rules.” With that Jamie and Patrick are left alone with Godzilla. “Mighty dangerous place out there in the dead zone. Wanna tell me what you were looking for besides trouble?” Knowing this might be their only shot Patrick speaks up, “A couple of your officers we hope… Rich and Poe? Do they work for you, sir?” Godzilla squints at them. For a moment recognition seems to dawn on his scaly face but then it’s gone, “No. Nobody by that name here. They sound like a couple of rule-breakers anyway. Perhaps they work over in Bridgetown. That’s the toughest precinct in these parts.” Jamie and Patrick ask if they can head that way but Godzilla seems hesitant, “It’s not exactly police friendly and you both seem like you follow the law.” Jamie and Patrick nod and think about all the coolz rulez they follow. “They won’t take kindly to either of us. But I can drop you over at an informant’s apartment and he might know something of interest. Just don’t… make a deal with him. He’s trouble.” They hop in Godzilla’s specialty police racecar and zoom on over to the apartment. When they approach the door it creaks open and a warty troll hand beckons them in. That’s right! We’re watching the 1986 cult classic Troll. Made on a shoestring budget and earning $5 million at the box office this was such an cult success that they later attempted to rebrand two different films as its sequel. Troll 2 actually is considered one of the worst films ever made and Troll 3 (originally The Crawlers) is largely forgotten. This was apparently mentioned on a list of the 50 worst films ever made, but that’s not enough to make it on the Wikipedia list so it was rejected. Let’s go!

(The rating has kind of hilariously been all over the place. Around 4.0 is obviously solid though. Interesting that it has nearly 10K votes as well, heartening.)

Leonard Maltin – 1.5 stars –  If your idea of entertainment is seeing Sonny Bono metamorphose into an apartment of foliage, this is the movie for you. Angelic tyke is possessed by a troll, who takes over her body and starts turning the neighbors into seed pods that eventually turn into new trolls. Too close to Gremlins; some viewers may get off on hearing June Lockhart swear. Sequel: Troll II.

(Troll II isn’t a sequel to Troll. Or at least, it is a SINO, a Sequel in Name Only. And yeah Leonard … seeing Sonny Bono morph into a forest is exactly what entertains me.)

(“The weirdest, and wildest … creature of them all. That troll legit just looks like the troll from Ernest Scared Stupid … or maybe Hoggle from Labyrinth?)

Directors – John Carl Buechler – (BMT: Troll; Friday the 13th Part VII: The New Blood; Razzie Notes: Nominee for Worst Visual Effects for The Garbage Pail Kids Movie in 1988; Notes: A Special Effects guy back in the heyday of 80s horror. He actually directed a number of features, most just don’t have reviews online.)

Actors – Michael Moriarty – (Known For: Pale Rider; Courage Under Fire; The Stuff; The Last Detail; Q; Bang the Drum Slowly; Shiloh; Dog Soldiers; It’s Alive III: Island of the Alive; Hickey & Boggs; Shiloh 2: Shiloh Season; Future BMT: Along Came a Spider; Neverwas; BMT: Troll; Notes: Probably most well known for Law & Order where he was the prosecutor for the first four years of the series’ run. He was eventually replaced by Sam Waterston.)

Shelley Hack – (Known For: Annie Hall; The King of Comedy; Time After Time; The Stepfather; Future BMT: House Arrest; BMT: Troll; Notes: Was a Charlie’s Angel for a season in 1979.)

(I mean sure. You couldn’t not make money with cheap horror films back in the day it seems.)

#113 for the Fantasy – Live Action genre

(Juuuuust beats out In the Name of the King: A Dungeon Siege Tale for our lowest grossing film in this genre. Right before the big Willow / Princess Bride boom in the 80s. Then everything kind of died off when people realized the effects looked like crap and were expensive. And then Highlander: Endgame changes the game in 2000 .. Joking, it was Harry Potter.)

(Very few reviews naturally, and surprisingly bad considering how innocuous the trailer looks. The consensus can be summed up as: Boring, insufferable, and not scary. Reviewer Highlight: Almost as scary as the Leprechaun – Kevin Fiddler, Henderson Home News) 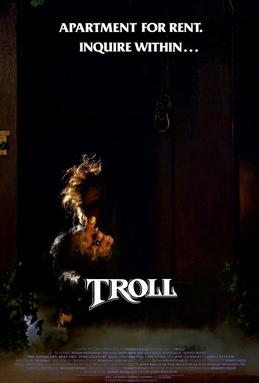 (This is so hard to distinguish what it’s trying to show that it has to have been done intentionally because they knew the troll looked dumb. It’s just like… a bad photo. A very tiny amount of credit for the font I guess.)

(Things aren’t going well for the Troll marketing team. Is there a joke here… are we supposed to be enticed by the prospect of a Troll landlord? At least it’s short and all the words make sense when put together.)

(The original keyword was “girl in a notably short outfit” for reals. How about fucking “troll”?! Who wrote this email generator … oh yeah, I did. Anyways I manually replaced it. I’ve seen … most of these kind of sadly. I don’t see how Slackers applies though … maybe they are referring to like … online trolls there?)

Notes – The hero of this film is a boy named Harry Potter Junior, who is surrounded by a fantasy world of witches, wizards and magic, 11 years before J.K. Rowling’s Harry Potter novels swept the publishing world.

Julia Louis-Dreyfus has admitted being embarrassed by her role. In April 2013, Jay Leno showed her scene as a nymph on The Tonight Show with Jay Leno: Episode #21.125 (2013). Louis-Dreyfus was surprised and visibly annoyed that Leno dredged up her connection to the film. (Yeah not a good look. I sometimes think about how annoying it would be if I was like “My God, Jason Statham. I loved you in In the Name of the King: A Dungeon Siege Tale.” I imagine he would punch me square in the face).

Brad Hall and Julia Louis-Dreyfus play an on-screen couple in this film. In real life, the two were dating, and married the year following the film’s release. It remains the only live-action film in which they starred together, although both provided their voices to A Bug’s Life (1998).

Although she remained covered in the film for her transformation into the Faery, an on-set photo of Julia Louis-Dreyfus was published in the March 1986 issue of Cinefantastique Magazine in which her bare breasts were visible. (Oh no)

The movie Troll 2 (1990), despite its title, is not a sequel to this movie and also does not contain Trolls. (Yeah they are goblins from Nilbog in that one)

In John Carl Buechler’s original story treatment, Torok was a monster who was systematically killing off the inhabitants of the building slasher-movie style. Producer Charles Band wanted to create a PG-13 movie, so the story was altered and the fantasy element was created.

The picture of Galwyn in his human form (before being turned into a mushroom) that Eunice St. Clair shows Harry Potter Jr. is a caricature of the film’s director, John Carl Buechler.

As production began, Michael Moriarty complained to director John Carl Buechler that he didn’t understand his character. The day that they shot the scene in which the Potter family moves into the building, Buechler snatched a bucket hat off the head of first assistant director Mauro Sacripanti and put it on Moriarty. “I look ridiculous,” Moriarty said. “So Harry Potter is ridiculous?” A light-bulb went off and there was no further discussion of the character. (I’m ridiculous … all I needed to know m’man. Jesus, this movie)

The Ratspit puppet from “The Dungeonmaster” (aka Ragewar (1984)) is recycled.

Director John Carl Buechler had been so impressed with Noah Hathaway’s performance in “The Neverending Story” that he cast him as the lead in the film.

“Cantos Profane,” otherwise known as “The Troll Song,” was recorded prior to shooting and set the tone for the rest of Richard Band’s musical score. The characters were supposed to perform it as a full-blown production number, but due to limitations in the low-budget puppets they had to grunt along to the music. (Oh no, I’m getting whiffs of Garbage Pail Kids the Movie)

While the film is not short on hideous or disgusting creatures, Torok is the only troll to appear on screen. The other creatures are fey folk, nymphs, goblins, and other mythical beings. (Coooooool)

The role of Malcolm Mallory was explicitly written for Phil Fondacaro but director/FX man John Carl Buechler was pressured to cast Billy Barty. Originally, a fully animatronic puppet was intended to have been utilized for Torok the Troll, but Buechler scrapped his plan and sculpted a creature costume directly onto Fondacaro’s life cast, knowing that the producers wouldn’t want to pay two different actors. (The guy seems like a straight up VFX genius)