Hats backward and cargo shorts a-baggin’, Rich and Poe skateboard their way to the Italiano Arcade & Pizzeria to smash on some video games and eat some ‘za. They immediately own a bunch of middle schoolers in Super Mario Bros 3 like some video game wizards and make their way to the top of the social pyramid. There are some dope tweens around, but they are by far the dopest. “Haven’t seen you two around here before. You guys sure can whiz on the j-stick,” one of the kids say, “they call me Toad, who are you?” Rich steps up, “I’m Big M and this is my bro LJ. We’d mash the ‘cade all day, but our Granny is a real lamester. You chilling me?” Toad nods and laughs while Poe tries not to cry. That’s his beloved Granny they’re talking about. Nobody calls her a lamester. Rich continues, “but maybe that’s not the worst thing, you feelz? We heard some real slippery things going on around here.” Toad looks a bit nervous, “Yeah, real canopy thang. But it’s just Elivira, the new nanny. Everyone else is icy.” Rich and Poe look at each other. Elvira? That doesn’t sound like Gruber. They looks around but Poe can’t see anyone that looks suspicious. “Rich, I don’t think this is working… Rich?” Rich is staring off into the distance. The crowds part between him and the most beautiful woman in the world. She flips her golden hair to the side and beckons to him. He floats towards her… the seductive and super creepy nanny who looks both ageless and yet thousands of years old. His mind is telling him to resist, but he has eyes only for this scary witch nanny and the creepy tree she’s sitting in. Wait, what? That’s right! You knew right from the start when I was talking about witch nannies and creepy trees that there was only one film I could be talking about. Let’s say it all together. The Guardian (1990). Of course. That film that everyone knows. Well at least one person knew about it and his name was Roger Ebert and he hated this film. In fact he said it was one of the worst he had ever seen. Good enough for us. Let’s go!

(The rating feels really low for a film from the early 90s and for a film I’ve never heard of. Even after the regression that is pretty astonishing. It really must be a terrible horror film. Getting a little excited here.)

Leonard Maltin – 2 stars –  Yuppie couple hires a nanny for their newborn child, but we know there’s something odd about her: she feeds babies to a tree in a nearby gully. Friedkin’s first return to horror after The Exorcist has a few good scenes, but a ludicrous story and a hormorless approach. Seagrove is very good in an almost unplayable role. Cowritten by the director from the novel The Nanny by Dan Greenburg.

(I probably knew this was based on a book and forgot to be honest. Everything in this preview is about Friedkin. He really squandered a lot of his good will by 1990 it seems. He only really directed sporadically after 1985.)

(‘Member the Exorcist? Me too … member that thing where William Friedkin was the director … cool me too.’ I literally have no idea what this film is about or what it is beyond a horror film made by the director of the Exorcist. Should I watch the Exorcist then? It feels like a good extra homework assignment.)

Directors – William Friedkin – (Known For: The Exorcist; The French Connection; Killer Joe; To Live and Die in L.A.; Cruising; Sorcerer; Bug; The Boys in the Band; Rampage; The Brink’s Job; Future BMT: Jade; Deal of the Century; The Hunted; Blue Chips; Rules of Engagement; BMT: The Guardian; Razzie Notes: Nominee for Worst Director, and Worst Screenplay for Cruising in 1981; Notes: Given he directed The Exorcist it might be surprising to know he grew up Jewish, became agnostic, and then is clearly a Christian in some capacity given recent quotes.)

Stephen Volk (screenplay) – (Known For: The Awakening; Gothic; Future BMT: Octane; BMT: The Guardian; Notes: Famously wrote and directed Ghostwatch, a fake documentary which played on the BBC which confused a bunch of people who thought it was real. It was banned from replay for a decade.)

William Friedkin (screenplay) – (Known For: To Live and Die in L.A.; Cruising; Rampage; BMT: The Guardian; Razzie Notes: Nominee for Worst Director, and Worst Screenplay for Cruising in 1981; Notes: Cruising was considered by many as anti-gay, and the film was protested by the gay community at the time of production)

Actors – Jenny Seagrove – (Known For: Local Hero; Another Mother’s Son; Moonlighting; Future BMT: Run for Your Wife; BMT: The Guardian; Notes: Long time partner of Bill Kenwright who is an actor and … the chairman of Everton F.C. since 2004? Still works as an actress, although not as often.)

Dwier Brown – (Known For: Field of Dreams; House; Red Dragon; Gettysburg; To Live and Die in L.A.; The Cutting Edge; Reunion; Future BMT: House II: The Second Story; Mom and Dad Save the World; BMT: The Guardian; Notes: If you’re racking your brain trying to figure out who he was in Field of Dreams, he was Kevin Costner’s father at the end.)

Carey Lowell – (Known For: Leaving Las Vegas; Licence to Kill; Sleepless in Seattle; Fierce Creatures; Future BMT: Club Paradise; Love Affair; BMT: The Guardian; Notes: You’d know her from Law & Order, she was on the order side of things, as a DA.)

(Probably not great … although you could make these things for less than a million around this point in time, so maybe it turned as profit.)

(It feels like this came at a peak of the genre in the late eighties. Kind of went on a bit of a hiatus after. Still having a moment now, especially with It Part 2 coming out this year, should be good for R-rated horror.)

(Nice I get to make a consensus: Hysterically funny … wait, it was supposed to be a horror film? Reviewer Highlight: Maybe after years of banging his head against the system Friedkin decided with “The Guardian” to make a frankly commercial exploitation film. … give us a break. – Roger Ebert, Chicago Sun-Times)

Poster – The Guardian Not Starring Kevin Costner (B+) 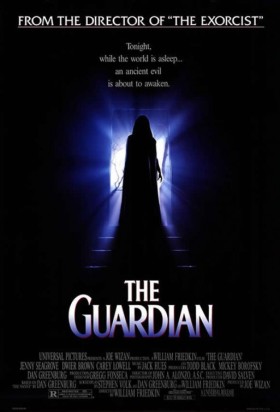 (Too many words and the image itself is a bit small, but I’m digging the simplicity of it and the coloring. The font isn’t the worst either. Good effort.)

Tagline(s) – Tonight, while the world is asleep… an ancient evil is about to awaken. (F)

(I literally don’t understand this… when? Tonight? Is that like… when I’m watching the movie or is the film set over a single night during which the ancient evil awakens? Neither? Cool cool cool. Just one more thing. Would it have mattered if that ancient evil awoke while everyone was awake? No? Interesting.)

(Shit. I have to watch The Animal for a third time. Maybe Jamie will appreciate it more given it stars someone from Survivor. [Editor’s Note: I will])

Notes – Jenny Seagrove was unhappy with the film’s constant re-writes, and wanted to make a completely different film. She said to The Guardian in 2007: “It was about this druid nanny who became a tree. I begged Universal to make it about a real nanny who kidnaps babies. ‘No, no, we can’t do that,’ they said, ‘the thirty somethings in America won’t come and see the film.’ I said, ‘I think you’re completely wrong; this film is total fantasy, and it’s just awful.’ Two years later The Hand That Rocks the Cradle (1992) was released, so I rang up my friend at Universal and he said, ‘Don’t. Don’t even talk about it, you were right.’ ” (haha)

Was to originally be directed by Sam Raimi, but he left the project early to direct Darkman (1990). Producers brought in William Friedkin, and the project suffered through several re-writes sending co-writer Stephen Volk into a breakdown. Friedkin eventually took over the writing duties. (oooooooooooof)

One of only two feature films that William Friedkin wrote nothing about, positive or negative, in his memoir The Friedkin Connection (see also Deal of the Century (1983)).

A new effects crew was brought onto the scene after the initial tree failed to work mechanically. The new team constructed a tree that held 500 gallons of fake blood and detachable bark. (oh no, haha)

The delivery scene used real footage of an actual live birth. (oh no … I would just say haha here, but that would feel redundant)

The film was released three years after its source novel “The Nanny” by Dan Greenburg had been published in 1987. (Fact: I did not read this book)

A cable television version of the film is not billed to William Friedkin, but to Alan Smithee, a generic name which is used by directors when they don’t want to be associated with a picture. This, despite the fact that Friedkin claims on the film’s audio-commentary he never heard of such a version. There are two versions of “The Guardian”: the theatrical cut, credited to Friedkin, and a modified cut, credited to Smithee. The Smithee cut has never been released on home video or DVD, and has only been shown on cable. It includes new scenes, including another scene in the hospital, different dream sequences, a scene of the nanny waking the wife up and alternate angles for other scenes. Also, the ending of the cable cut is different and omits much of the gore. (Oh wow, that is kind of cool. They cut a version and clearly didn’t ask him about it. Sounds like we can’t get it though)

Chicago Sun-Times movie critic Roger Ebert named the picture one of his “Most Hated Films” of all-time. (Noice, it is on his end of the year worst of list so …)

One of three movies with “The Guardian” title made during the modern era of Hollywood. This supernatural horror movie was made and released around six years after the 1984 action crime thriller The Guardian (1984) and sixteen years before the sea rescue drama The Guardian (2006). (We have now watched two for BMT. Martin Sheen’s 1984 film doesn’t have any reviews. That sounds like I have to cook up 5 fake reviews to get this onto Rotten Tomatoes …)