Jamie and Patrick stop dead in their tracks as they espy Chris Klein and Josh Hartnett by the craft station. “What thuuuuuu…” Patrick says before storming over and knocking their Nespresso’s out of their hands. Chris and Josh are stunned, “what the hell, bro,” Chris says annoyed, “I thought we were friends. You know how much I love my Nespresso.” But Patrick isn’t having any of it and demands to know why they are there. “We’re just here to be your body doubles, man. Chill. The studio was getting a little worried about… well…” he looks away embarrassed. But Patrick presses him on it. “Well,” Josh continues, “it’s because you gained sixty pounds and have been wearing a fedora in every scene.” Patrick is shocked and looks down at his body. It’s not that bad… right? And everyone loves his hats. But even Jamie looks away at that. Patrick storms back to their trailer. “What are we going to do?” he asks Jamie, “we’re losing control of the production. First body double, next they’ll replace us entirely and then our vision will never be realized.” Jamie rubs his hands in glee. Finally, it is happening and they will get full control, just like he wanted from the beginning. A fire lights in his eyes. “We’ll burn it all down,” and they both cackle in glee.

“They did what?!” Banks says upon hearing that Jamie and Patrick had fired the entire cast and crew of the film. Unbelievable. This just went from a debacle to a disaster and all because Patrick was a glutton and Jamie a vengeful maniac. As a last resort he arrives on set to find Patrick smiling peacefully at the quiet serenity of the abandoned set and Jamie tearing it all down with a chainsaw. Perfect. That’s right! We’re watching (another) film that somehow attracted crazy huge stars but ended up bombing at the box office. It’s Serenity starring Matthew McConaughey and Anne Hathaway. Never heard of it? We have and apparently it’s gotta be seen to be believed. This is for Bring a Friend and we’re gonna do something a little different by celebrating the 25th anniversary of a major BMT straight-to-video release. How is this connected to Serenity you ask? Well it also stars our boy Matthew McConaughey 25 years younger. That’s right! We’re watching Texas Chainsaw Massacre: The Next Generation, the absolute bottom of one of the major horror franchises in film history. This also means we’ll get the third film, Leatherface: The Texas Chainsaw Massacre III, as a bonus. Perfect. Let’s go!

(That is a really high BMeTric for something that seems to be an independent film gone awry. The more I dive into this preview the more intriguing this movie becomes … I imagine actually having to watch it will reveal that it is in fact merely a boring drama.)

RogerEbert.com – 1.0 stars – “Serenity” is terrible and insane, and will surely end up being one of the worst films of 2019. But it’s also such a wildly ambitious roller coaster ride that it must be experienced, preferably with friends, to laugh together at its cheesy dialogue, over-the-top performances and multiple, major plot twists.

(Huh. That is kind of how I feel about Cats to be honest. So maybe this will end up being more interesting that I would have initially thought.)

(Wow, that really spelled out the whole mystery of this thing. I thought the film was just a weirdo paradise noir or something, and people hated the genre mash up. It seems like it is way way more nuts than that.)

Directors – Steven Knight – (Known For: Locke; Hummingbird; BMT: Serenity; Notes: He is one of three original creators of the British television game show Who Wants to Be a Millionaire? … impressive.)

Writers – Steven Knight (written by) – (Known For: Allied; Locke; Eastern Promises; The Hundred-Foot Journey; Hummingbird; Woman Walks Ahead; Pawn Sacrifice; Amazing Grace; Dirty Pretty Things; Closed Circuit; Future BMT: November Criminals; The Girl in the Spider’s Web; Burnt; BMT: Serenity; Seventh Son; Notes: The Girl in the Spider’s Web is quite interesting because it is the only major bad movie I could find that is set in Sweden. It is also really borderline, it is at like 39.8% on Rotten Tomatoes last I checked.)

Actors – Matthew McConaughey – (Known For: The Wolf of Wall Street; Interstellar; Sing; The Beach Bum; Tropic Thunder; Dazed and Confused; Between Two Ferns: The Movie; White Boy Rick; Dallas Buyers Club; A Time to Kill; The Lincoln Lawyer; Magic Mike; Contact; How to Lose a Guy in 10 Days; Mud; Reign of Fire; Killer Joe; Gold; Amistad; Free State of Jones; Future BMT: The Return of the Texas Chainsaw Massacre; The Wedding Planner; Surfer, Dude; The Dark Tower; Sahara; Paparazzi; My Boyfriend’s Back; Larger Than Life; Angels in the Outfield; The Sea of Trees; Two for the Money; BMT: Serenity; Failure to Launch; Tiptoes; Fool’s Gold; Ghosts of Girlfriends Past; Notes: He had a resurgence with Dallas Buyers Club and the HBO series True Detective in particular. From Texas, he was a bankable rom-com star for years.)

Anne Hathaway – (Known For: Dark Waters; Interstellar; The Dark Knight Rises; Les Misérables; Ocean’s Eight; Don Jon; Alice in Wonderland; Brokeback Mountain; The Devil Wears Prada; The Princess Diaries; Love & Other Drugs; Get Smart; The Intern; Rio; Rachel Getting Married; Colossal; Ella Enchanted; Rio 2; Becoming Jane; Havoc; Future BMT: The Hustle; The Princess Diaries 2; Passengers; Song One; Alice Through the Looking Glass; Don Peyote; The Other Side of Heaven; BMT: Serenity; Bride Wars; Valentine’s Day; Notes: Not a great year for her as this is our second Hathaway film we’ve seen for the 2019 bad film cycle. Oh wait, *checks notes* … she might have just had her second child. So strike that, a fantastic year for Anne Hathaway.)

Diane Lane – (Known For: Justice League; The Outsiders; Inside Out; Man of Steel; Trumbo; Unfaithful; Chaplin; The Perfect Storm; The Cotton Club; Streets of Fire; Rumble Fish; Hardball; Under the Tuscan Sun; Hollywoodland; Secretariat; Bonjour Anne; A Walk on the Moon; My Dog Skip; Ladies and Gentlemen, the Fabulous Stains; Future BMT: Jack; The Glass House; Must Love Dogs; Nights in Rodanthe; Murder at 1600; Movie Madness; Knight Moves; Batman v Superman: Dawn of Justice; Every Secret Thing; Mark Felt: The Man Who Brought Down the White House; Fierce People; BMT: Serenity; Judge Dredd; Jumper; Untraceable; Wild Bill; Trigger Happy; Razzie Notes: Nominee for Worst Supporting Actress in 1985 for Streets of Fire, and The Cotton Club; Notes: Really didn’t do any television at all (beyond the miniseries Lonesome Dove, but that is more of a movie) before kind of randomly appearing in the last season of House of Cards.)

(Pretty rough. I’m not sure where they were thinking they were going to make up that budget.)

Rotten Tomatoes – 20% (37/185): A high-concept mystery with a twist, Serenity isn’t what it appears to be at first — unfortunately, it’s also not anywhere near as clever or entertaining as it thinks.

(That is the thing, if the entire point of your film is to be clever, then it probably should be clever. You know? Reviewer Highlight: What an infuriating mess the makers of Serenity have unloaded on an unsuspecting public. It’s still only January, but this batshit bonkers trip through the subconscious has already earned a place among the year’s worst movies. – Peter Travers, Rolling Stone) 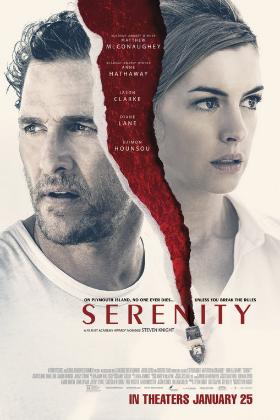 (I actually really dig this. Nice color scheme and overall cool and artistic. I always wish in cases like this they would put that final cherry on top and give us that sweet, sweet Serenity specific font.)

Tagline(s) – On Plymouth Island, No One Ever Dies…Unless You Break the Rules (D)

(Seems a bit specific since I don’t know what Plymouth Island is. And is that actually the plot of the film… an island where no one dies… the trailer made it seem like maybe a few people are going to die. Too long and not clever and I also don’t really know what it means.)

(It is kind of tough to find good keywords that are both informative (not too many movies have it), and interesting (enough movies have it). Here … weirdly the BMT ones I think I can specifically remember each of the fishing boats in them, so that’s fun. I might have to rethink the plots as well, a lot of them seem very same-y to me.)

Notes – The movie was filmed in Mauritius.

Uma Thurman was originally cast but dropped out and replaced by Diane Lane.

The film strongly references some famous literary works, including Moby-Dick (the protagonist’s Captain Ahab-like obsession), The Old Man and the Sea (the character’s obsession to catch the one fish that got away), The Rime of the Ancient Mariner (the same symbolic bird always following the boat), and Shakespeare’s The Tempest (the “we are such stuff as dreams are made on” quote).