Leonard Maltin – 2 stars –  Lifelong odd-couple pals are ordered (by O’Connell’s mob-boss stepfather) to deliver an envelope of money to Australia – but a kangaroo makes off with the cash. Juvenile comedy has a terrible script, but kids may still respond to the amiable leads and the Australian setting. Don’t blink or you’ll miss Dyan Cannon in the opening flashback as O’Connell’s mother. Followed by an animated direct-to-video sequel.

Rotten Tomatoes – 8% (9/115): The humor is gratingly dumb, and Kangaroo Jack contains too much violence and sexual innuendo for a family movie.

Tagline(s) – He stole the money… and he’s not giving it back. 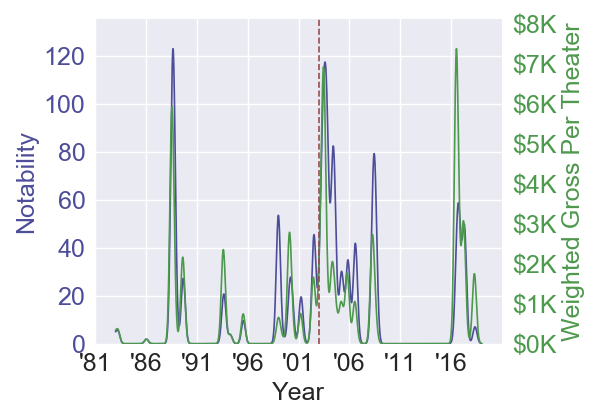 Notes – Inspired by an urban legend about a pair of Boston college students on break in Australia. While driving through the Outback, they accidentally hit a kangaroo with their Land Rover. Thinking they had killed it, they got out and placed the driver’s Boston Red Sox jacket on the kangaroo to take a picture before moving on. However, the kangaroo was merely unconscious, and awoke in the midst of the photo-taking. It broke free and took off across the Outback, still wearing the Sox jacket…along with the keys to the Land Rover in the pocket.

Trailers for the movie emphasized the tacked-on “talking kangaroo” scene, which gave audiences a false impression that this was a family film involving a talking kangaroo. Posters also emphasized the kangaroo. The misleading publicity is often credited with the film’s achieving the #1 box office spot on opening weekend; industry observers said later that if the film had been more honestly portrayed as what it was, as a gangster comedy with fairly adult humor, it probably would have failed. The film had dismal reviews from critics and considerable backlash from audiences who felt they had been tricked. There was a direct-to-DVD sequel that was more in line with what was promised by trailers, as it was an animated family comedy.

Producer Jerry Bruckheimer added a scene where the title kangaroo talks after seeing the success of the Disney release Snow Dogs (2002), which used a similar plot device.

Jerry O’Connell had to wear extensions for re-shoot scenes since he cut his hair short once initial filming was over. You can clearly see (if you look closely) an awkwardness to his hair in particular scenes.

The original working title for Kangaroo Jack was “Down and Under”.

According to the DVD special feature: “Behind the gas”. The hardest scene to create sound for were the farting camels. So the sound designers have tried many failed attempts to create farting sounds they tried Whoopie cushions, blowing in jello cups, armpit farts, all the way down to using their mouths. In sheer desperation the sound designers ate bean burritos, tacos, beans and drank milk, so the sound would come naturally.

When the boys first arrive in the bar, they are discussing their plans beside the telephone, and Louis says to Charlie, “Damn Skippy”, which is a tongue-in-cheek reference to a world famous Australian television series, Skippy (1967), which is about a kangaroo that is raised by a family, who manage the local national park. Skippy is also a world famous brand of Peanut Butter, with a Kangaroo logo